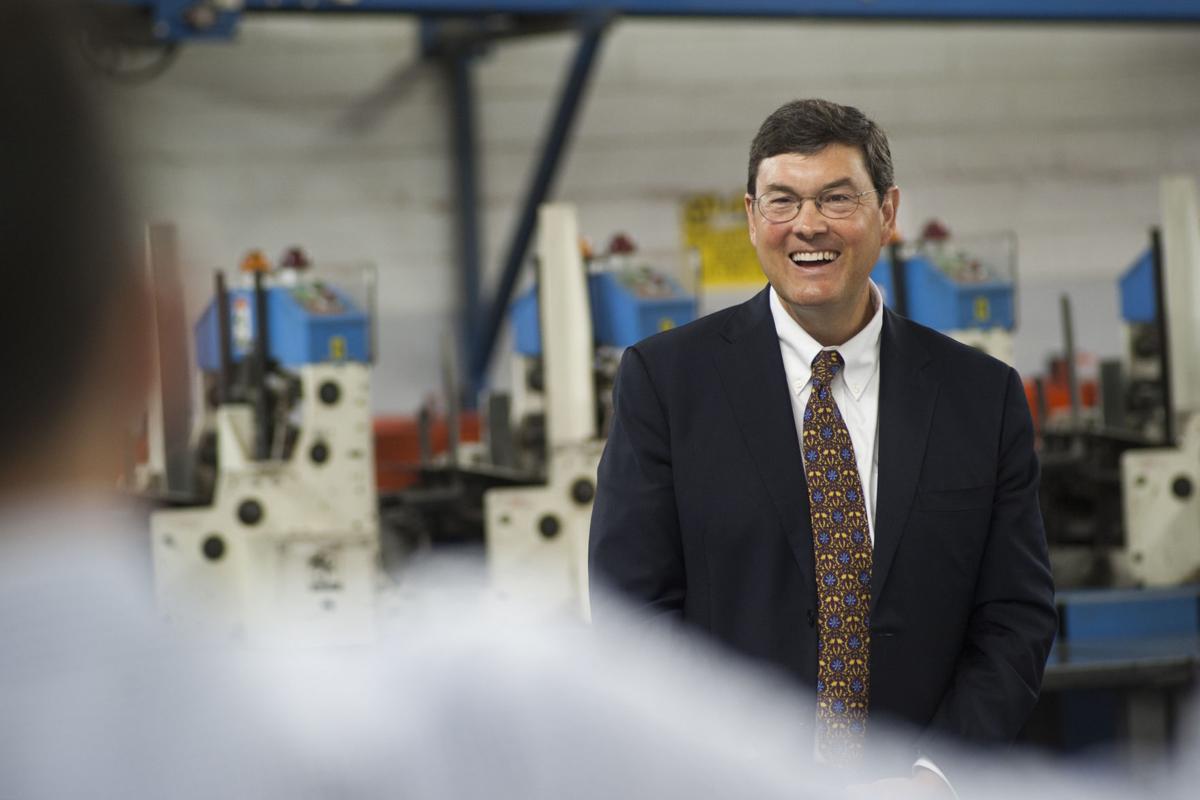 Bob Nutting, CEO of The Ogden Newspapers, speaks with employees of the Herald-Standard Monday after an agreement to purchase the newspaper — along with the Greene County Messenger — was announced. (Photo by Kelly Tunney) 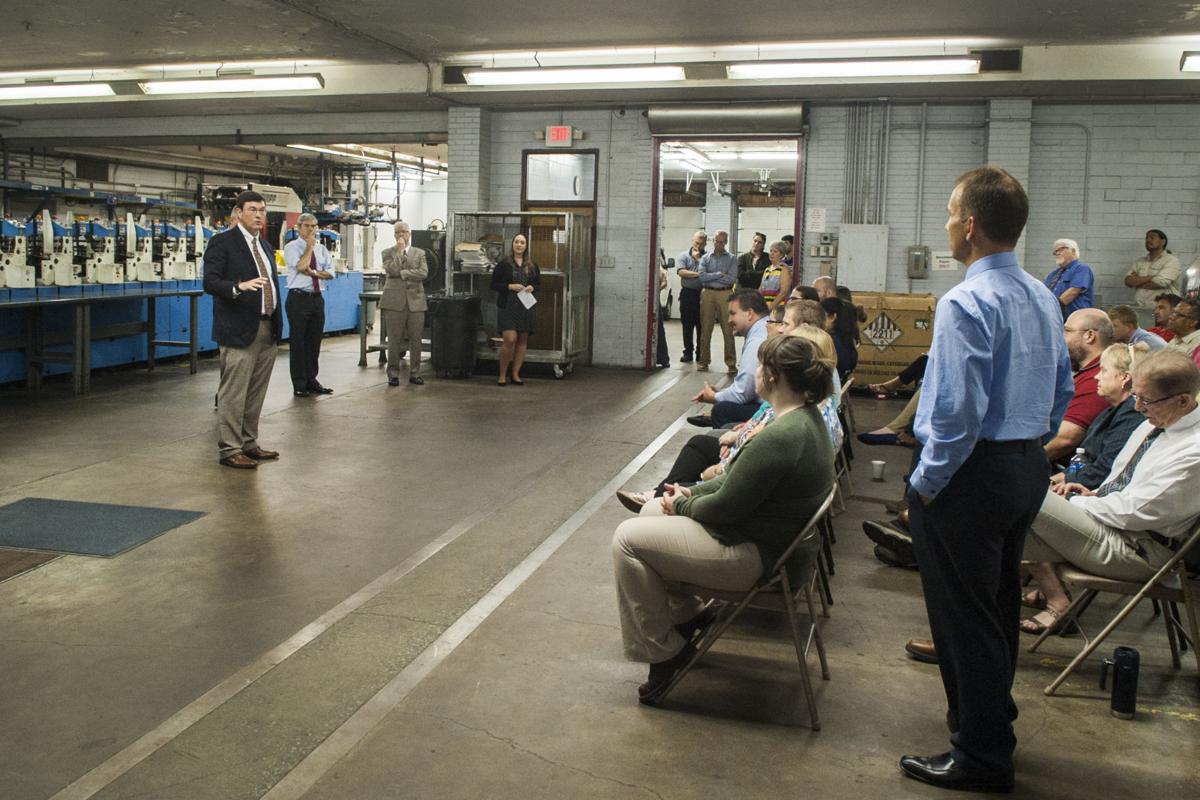 Bob Nutting (left), CEO of The Ogden Newspapers and chairman of the Pittsburgh Pirates organization, speaks with staffers of the Herald-Standard Monday after the agreement to acquire the newspaper -- as well as the Greene County Messenger and SWC Properties -- was officially announced. (Photo by Kelly Tunney, Herald-Standard)

Bob Nutting, CEO of The Ogden Newspapers, speaks with employees of the Herald-Standard Monday after an agreement to purchase the newspaper — along with the Greene County Messenger — was announced. (Photo by Kelly Tunney)

Bob Nutting (left), CEO of The Ogden Newspapers and chairman of the Pittsburgh Pirates organization, speaks with staffers of the Herald-Standard Monday after the agreement to acquire the newspaper -- as well as the Greene County Messenger and SWC Properties -- was officially announced. (Photo by Kelly Tunney, Herald-Standard)

Ogden Newspapers was founded in 1890 with the launching of the Wheeling News. Today, the company boasts 40 daily newspapers, several weekly publications and a magazine division within various states across the country.

Robert Nutting is also the principal owner of the Pittsburgh Pirates baseball team, chairman of its philanthropic affiliate, Pirates Charities, and chairman of Seven Springs Mountain Resort in Champion.

Robert Nutting said with the family’s investment in southwestern Pennsylvania and its love of newspapers, the purchase of the Herald-Standard and Greene County Messenger made sense.

“Between Uniontown, Seven Springs and the Pirates, and our West Virginia locations, it’s an ideal fit for us,” he said. “We love southwestern Pennsylvania, the people, the sense of community and the multigenerational commitment that so many families have to the region.”

As grandfathers and granddaughters bond during an afternoon at the ballpark, newspapers and their readers do likewise, he said.

“Those long-term relationships really matter,” he said. “As it is critical to the Pirates, newspapers do the same for a community, binding generations together.

“Those relationships really matter in the greater Pittsburgh region, as well as Uniontown and southwestern Pennsylvania.”

Publisher Robert Pinarski said he is pleased to have the Fayette and Greene county publications under Ogden Newspapers.

“I’ve always believed that family-owned companies are the backbone of the media industry,” he said. “Ogden’s commitment to community journalism will allow our reporters to continue telling the stories that matter to our readers, while looking for new opportunities to expand our coverage.”

With roots in southwestern Pennsylvania, Ogden Newspapers was the best choice to take over not only the publications, but also SWC Properties, Pinarski said.

“Our real estate business continues to look for opportunities to grow and serve additional communities,” he said. “I am truly excited for the possibilities that lie ahead of us.”

Robert Nutting said he is “very enthusiastic and excited,” about SWC Properties.

“We are very committed to its future,” he said. “It is a piece of the business that will go forward.”

Mark Contreras, Calkins chief executive officer, said the decision to sell the publications and properties was not one that came easily for the Calkins family.

“This decision was made after extensive deliberation by the Calkins family and the knowledge that our businesses could best thrive in a company with broader resources and reach,” he said.

Charles C. Smith, a Calkins board member and third-generation family member, said it is difficult to depart from a company that has been a part of the family fabric since 1937.

“All of us grew up and many still live in these communities and have a sense of responsibility to serve them,” he said. “Tremendous journalism came out of these properties for almost 80 years.

“We fought well above our weight class in terms of reporting...I’m amazed every day at the high level of journalism, regardless of size.

“I’m going to miss being able to point to the fact that my family owns the paper that produced that quality of work and the inherent pride that went with that.”

Economics was the driving factor for the sale, said Stan Ellis, Calkins board member.

“Our family always felt that we had the right vision and strategy for adjusting to the changing patterns of news consumers,” he said. “Our concern for the past several years was whether we would have the resources to see that strategy through to its successful conclusion. When it became clear that would not be the case, we came to the painful decision that we would have to find media companies that shared our vision and had the resources to complete what we started.”

“My mother always said, ‘Newspaper people are the best people in the world’,” Hardy said. “I have found this is always true. The folks who work to provide journalism for our counties are dedicated, and they have consistently met the highest of standards. I’m confident they will continue to deliver products that make our communities better places to live.”

Robert Nutting, meanwhile, said under Ogden Newspapers, the Herald-Standard will continue to serve the community.

“It will continue to focus on the local news that matters,” he said.

In Pennsylvania, Ogden Newspapers operates the Altoona Mirror, in Altoona; the Sun-Gazette in Williamsport; Times Observer in Warren, The Lewistown Sentinel in Lewistown; The Express and Clinton County Shopper in Lock Haven; County Observer, Reedsville and The Luminary and East Lycoming Shopper & News in Hughesville.