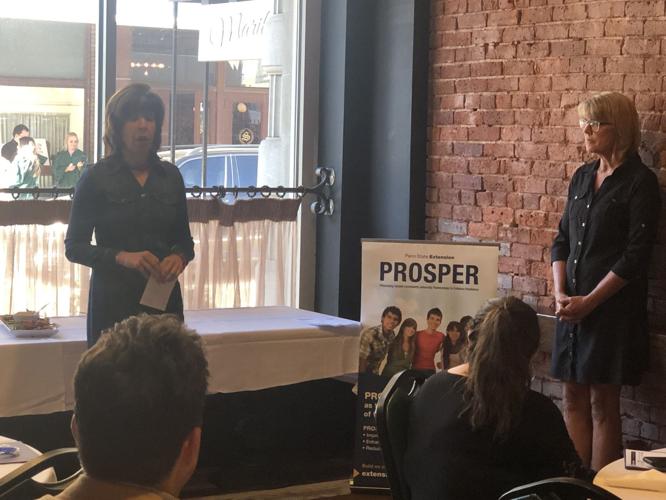 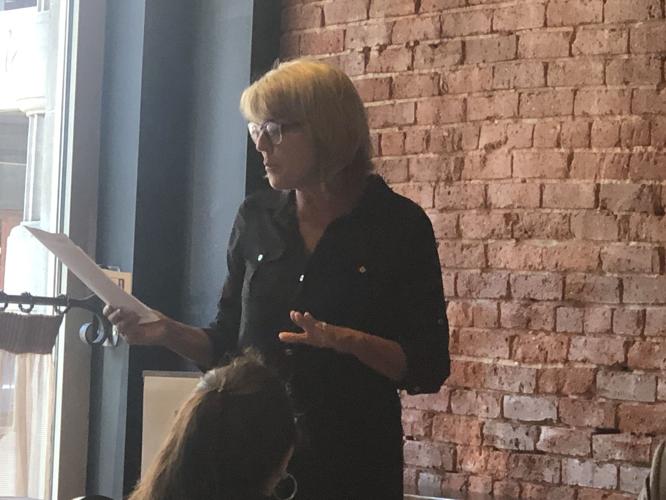 Kendel Ehrlich, deputy director of the White House Office of National Drug Control Policy, addresses county officials and PROSPER model partners in Uniontown. Ehrlich and another White House official made a stop in Fayette County to learn about the success of the partnership model in delivering evidence-based programs.

Kendel Ehrlich, deputy director of the White House Office of National Drug Control Policy, addresses county officials and PROSPER model partners in Uniontown. Ehrlich and another White House official made a stop in Fayette County to learn about the success of the partnership model in delivering evidence-based programs.

The deputy director of the Office of National Drug Control Policy traveled to Fayette County to learn about a locally instituted substance abuse prevention model.

Kendel Ehrlich said she wanted to know what’s been working, and how it may be applied to other parts of the country that are still struggling with prevention.

Ehrlich and Anne Hazlitt, senior adviser to the White House on Rural Affairs, heard about PROSPER (PROmoting School-community-university Partnerships to Enhance Resilience), a model developed by prevention scientists and extension staff at Iowa State and Pennsylvania State universities. The program is based on 20 years of experience and research funded by the National institutes of Health.

Deichert likened it to something close to a public health model, like one for the prevention of heart disease that focuses on decreasing risk factors and increasing protective factors. The same can be done for substance abuse in young people, she said.

Deichert said the approach is successful because it is dependent on a strong partnership between local schools, the community, university specialists, and researchers. PROSPER teams work together to implement programs for youth and their families, including the Strengthening Families Program for parents and youth ages 10-14.

The Strengthening Families Program for Parents and Youth ages 10-14 is offered annually to 5th and 6th graders and their parents at two county school districts - Laurel Highlands and Uniontown. This program, which was funded by a grant in 2014, features a concurrent parent-only and youth-only hour long segment, followed by an hour long joint family segment. Interactive sessions include role playing, discussions, learning games and family projects. The program is taught to a group of eight to 13 families over a period of seven weeks.

With it being an evidence-based initiative, Deichert stressed the statistics that have come out of the program’s pre- and post-survey since the spring of 2015. According to the data, 43 families have graduated to date with 88% feeling it helped improve family cooperation and problem solving and 100% feel it increased positive rule enforcement.

In addition, Deichert said many families have chosen to repeat the program either as a refresher, or because they’ve had a younger child age into the program.

“Kudos – all the way around,” Ehrlich said.

Ehrlich’s agency promotes a three-tiered strategy: prevention, treatment, and recovery. On a federal level, Ehrlich said, it all boils down to supply and demand. Taking drugs off the streets remains a priority. She said drug seizures nationwide this year have been some of the largest in history.

“This president has given this issue the biggest priority,” said Ehrlich.

“It’s so important because many rural communities and small towns have been hard hit and don’t have the resources to combat it,” said Hazlett.

One of the first steps is getting the tools into the hands of rural community leaders, such as better access to overdose data and not just the number of deaths. There are powerful factors driving that data and if those leaders have access to it they can learn how to use that knowledge for prevention.

The agency is working on creating a community action guide, so communities around the country can learn from each other. The programs that are working, like PROSPER, will be available through the guide. There is also a resource guide, which the agency is in the process of updating from a .pdf file to a website to make it more user-friendly.

Ehrlich and Hazlett also wanted to know what the challenges were in Fayette County. Several attendees suggested that homelessness and poverty continue to strain already limited school resources. Family traumas have also caused difficulty, they said. Staffing shortages in the court and prison systems was also targeted as significant challenges by county Sheriff James Custer.

Ehrlich and Haslett said the county seems to be facing many of the same challenges of other small towns and rural communities. They had some ideas - drug court, medically-assisted treatment programs for the incarcerated and probation reform - all of which are already being done in Fayette County.

Well, isn't this hilarious. A few days ago, we read that overdose deaths are falling across the state, except in Fayette County. So the White House sends personnel here to do what again?