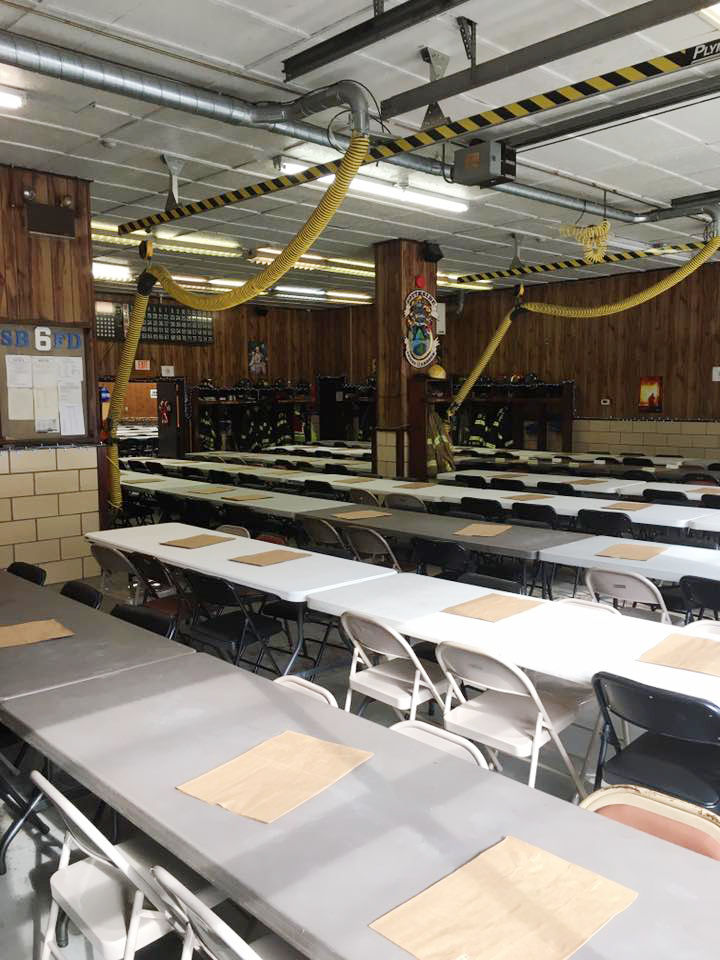 The South Brownsville Fire Co. No. 1 was set up for bingo at its fire hall before the coronavirus pandemic forced fundraiser cancellations throughout the state, which volunteer fire departments rely on to pay their bills. 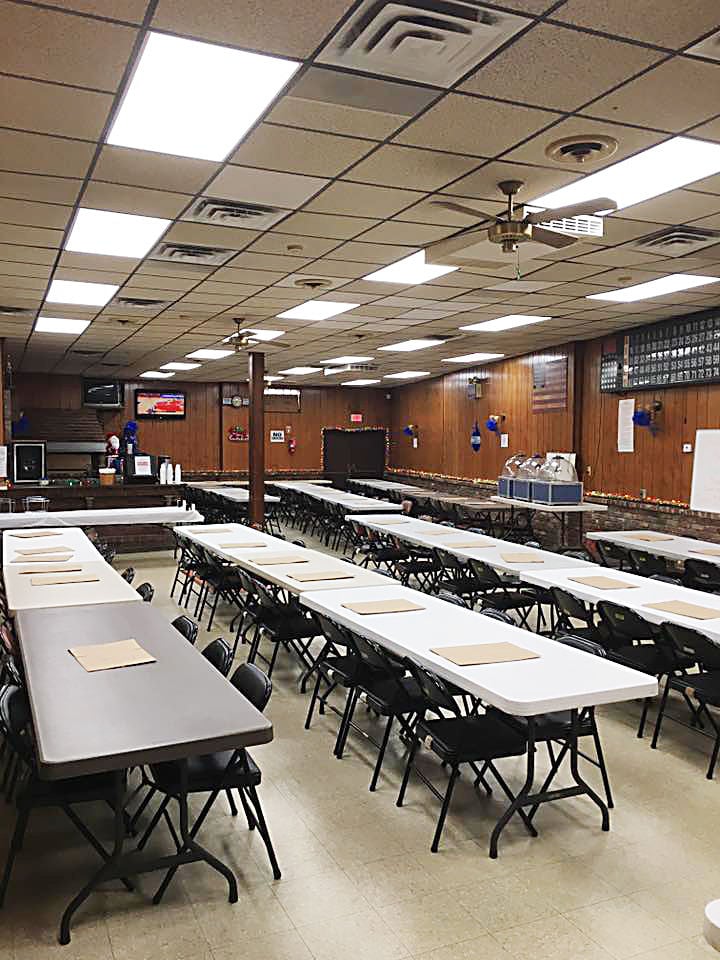 South Brownsville Fire Co. No. 1 was set up for bingo at its fire hall before the coronavirus pandemic forced fundraiser cancellations throughout the state, which volunteer fire departments rely on to pay their bills. 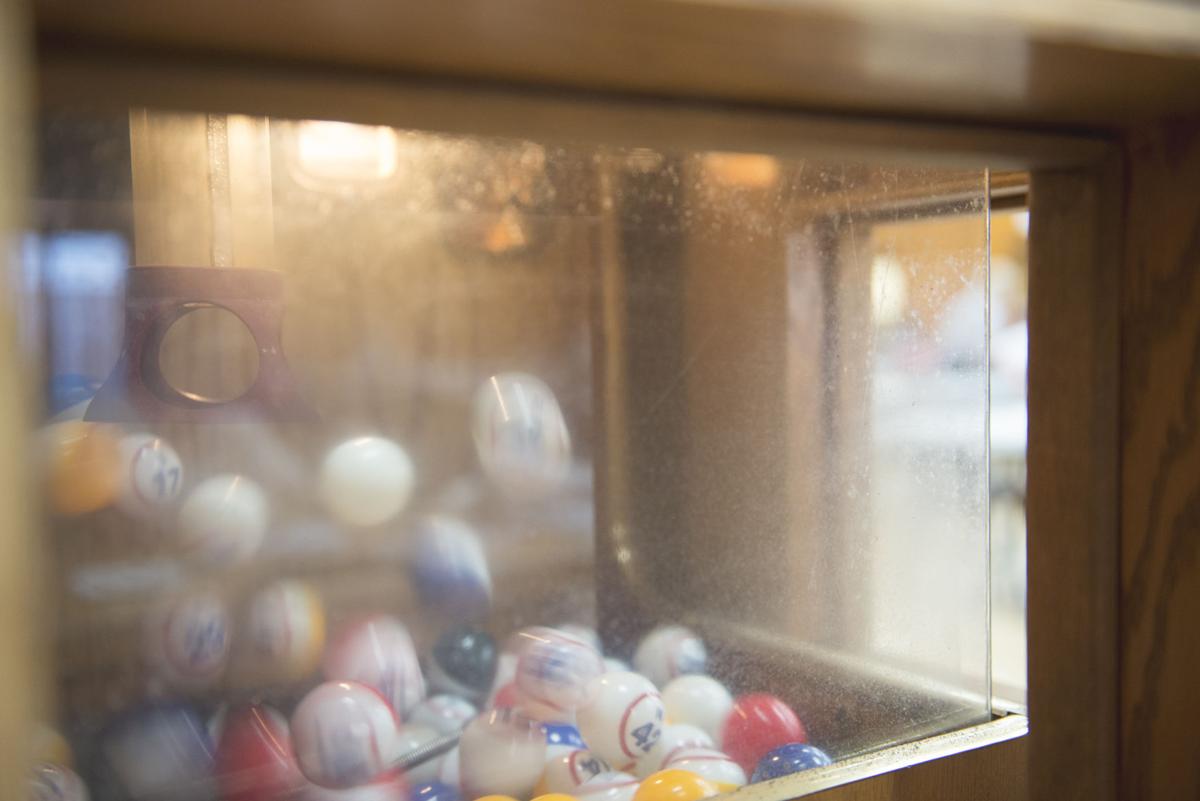 Volunteer fire department bingos and other fundraisers have been canceled during the coronavirus outbreak, prompting departments to wonder how they’ll make ends meet. 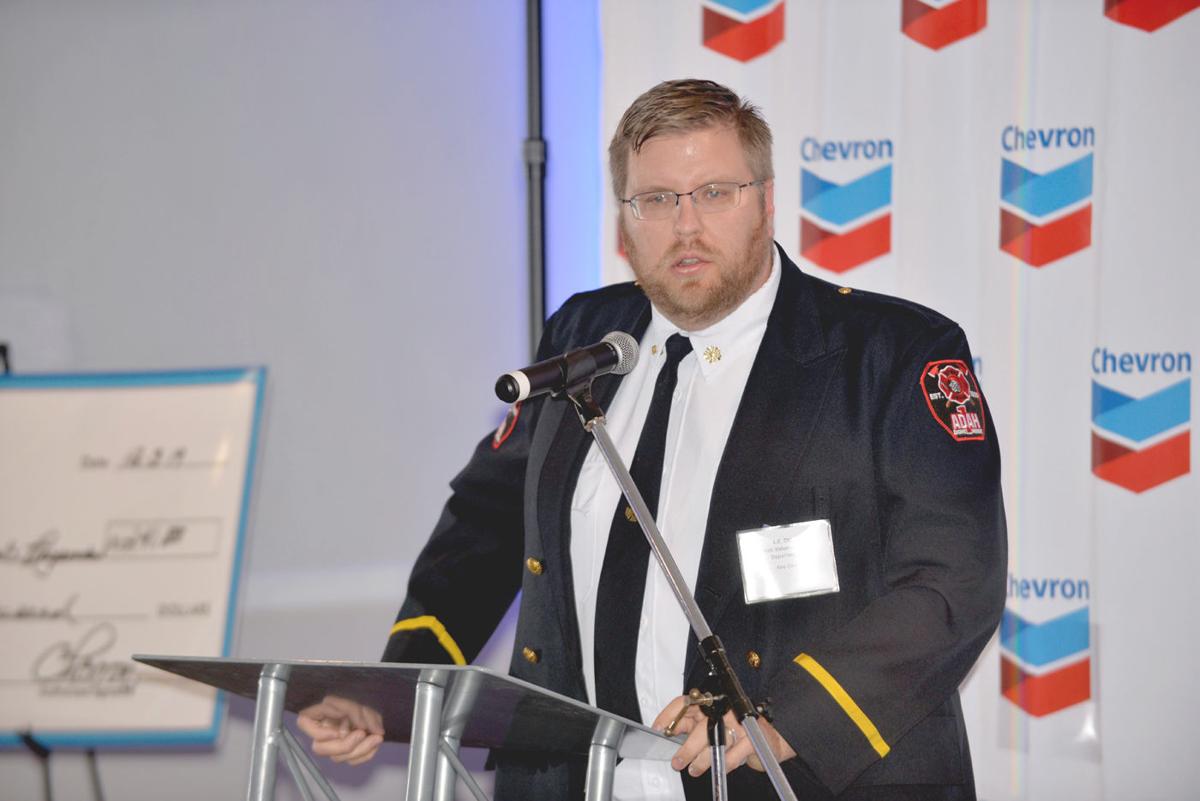 In this December 2019 photo, Adah Volunteer Fire Chief LC Otto thanked Chevron for a donation made to his department and others in the area. Now, Otto and other fire chiefs in the county are concerned about making ends meet in light of forced fundraiser cancellations during the COVID-19 outbreak. 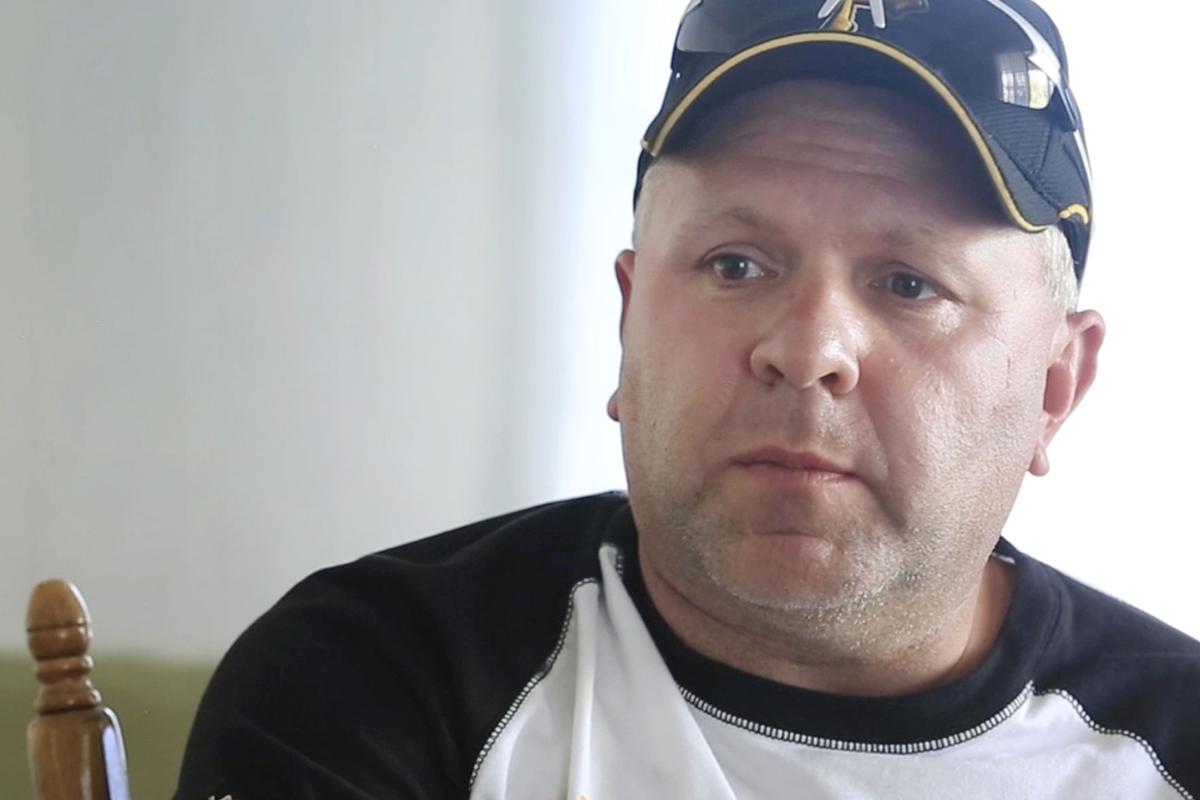 The South Brownsville Fire Co. No. 1 was set up for bingo at its fire hall before the coronavirus pandemic forced fundraiser cancellations throughout the state, which volunteer fire departments rely on to pay their bills.

South Brownsville Fire Co. No. 1 was set up for bingo at its fire hall before the coronavirus pandemic forced fundraiser cancellations throughout the state, which volunteer fire departments rely on to pay their bills.

Volunteer fire department bingos and other fundraisers have been canceled during the coronavirus outbreak, prompting departments to wonder how they’ll make ends meet.

In this December 2019 photo, Adah Volunteer Fire Chief LC Otto thanked Chevron for a donation made to his department and others in the area. Now, Otto and other fire chiefs in the county are concerned about making ends meet in light of forced fundraiser cancellations during the COVID-19 outbreak.

Volunteer firefighters are dipping into their own bank accounts to pay the bills at fire companies that relied on fundraisers, many now canceled indefinitely due to COVID-19 mitigation efforts.

“My fear is that some of them might not be able to recover. I hope this isn’t what finally shuts them down, because every fire department has a purpose,” said South Brownsville Fire Co. No. 1 Chief Ron Barry.

Most local departments pay all of their expenses out of pocket, saving state taxpayers $6 billion annually, according to a 2014 study. Volunteers have the same training requirements and skills as paid firefighters.

“Any volunteer firefighter will tell you, you spend more time raising money than you do fighting fires,” Barry said. “A lot of our volunteers are just like everybody else. Their jobs are effected by (COVID-19 closures). They’re worried about keeping the lights on, putting food on the table, keeping the roof over their heads. And then they’re also worried about the fire department.”

Department costs includes basic utilities – electricity, heat, internet – fuel for their fire trucks and other basic costs. They buy their own equipment, paying $500,000 for fire trucks, $120 per section of fire hose and $7,000 to $8,000 for each firefighter’s gear. Many have loan payments on firetrucks and other equipment, and pay maintenance costs for their vehicles and fire station, insurance on their vehicles and supplemental insurance for their firefighters.

Those who pay insurance quarterly had to write big checks at the end of March, with little or no money coming into the department. Few have savings accounts, and those that do are saving for equipment, maintenance and other forthcoming expenses.

The department moved some of its fundraisers online to its Facebook page. They sold $20 food tickets, with the theme of “April Necessities.” In addition to food supplied by the Fredricktown Butcher Shop, the winner also received an elusive item: toilet paper. They have a cash/gun bash scheduled for April 19 that will be held on Facebook Live. Lenk said he anticipates low turnout because of low numbers for their March cash bash held March 14, before in-person gatherings were canceled.

“We just barely broke even, and that’s all we have. That’s our fundraiser,” Lenk said. “We rely on what we raise. We keep what we have, and it’s gonna be a struggle.”

He said it takes $4,000 monthly to keep the department running, but they had an additional $4,000 cost for their quarterly insurance bill.

“We didn’t make enough in March to pay the bills, and then we get hit with a $4,000 insurance bill,” he said. “Some of the firemen chip into pay the bills.”

He said without something changing, the department could be forced to close in June.

“That’s what’s scary is nobody knows when this is going to be over. So what to we do? How do we plan? How do we manage?” he said.

Other departments were saved narrowly by fish fries, which made up part of their loss from bingo and other regular fundraisers. Canceling dine-in options hurt their numbers, as did the Catholic Church loosening its rules in banning meat on Fridays during the pandemic. Many departments offer takeout or delivery for their fish fries.

West Leisenring Volunteer Fire Chief Greg Wallace said his department is losing $1,100 to $1,400 weekly without bingo. They need to make between $4,500 to $4,700 monthly to pay the bills.

“The fish fries are what keep us going right now,” he said.

Normalville Area Volunteer Fire Department was forced to cancel its bingo nights until further notice, in addition to its March vendor show. Their April cash bash was rescheduled for June 27. Fire Lt. Colby Burkett said they continued to have average turnout for their Friday fish lunches.

Those six canceled events means a loss of about $20,000, Kelly said.

Without a savings account or municipal funding, the department has to make a $1,100 monthly loan payment for equipment and pays about $3,500 in monthly bills.

“When you don’t have those fundraisers ... you just look around and say, ‘What are we going to do?’ We don’t know what we’re going to do.” he said. “I’ve been involved in this so long, it’s like a second home to me. It’s like raising a second family. You have to keep afloat and take care of them.”

About 9% of the department’s annual income comes from an annual fund drive, through a mailing sent to residents in the spring.

“They’re probably going to put that on the bottom of the pile. There are certain bills they can’t pay because they’re out of work. They might throw that in the trash,” he said.

Barry said his department is “blessed” with community support for its fish fries. His department is delivering fish dinners to doorsteps, or taking it to cars in the parking lot.

“They know what kind of boat we’re in, so they do what they can. But it’s going to get to the point where they’re not going to have money to spend, because they have to put food on their table, too,” he said.

South Brownsville No. 1 is better off than some departments, with the borough paying fuel for its fire trucks and money in savings. But Barry said they are waiting on a bill for truck maintenance they fear will take a big chunk out of their savings account.

Adah Volunteer Fire Department was in a good place, with new equipment and debt managed, said Chief L.C. Otto. Still, monthly costs of about $3,000 will be hard to cover, he said

He hopes life returns to normal by June, when their major fundraiser, an annual hog roast, is scheduled. They will need to make $20,000 in June, he said.

Otto, also a German Township supervisor, has been speaking with legislators to increase awareness about the hit canceled fundraisers have placed on volunteer departments. If stay-at-home orders continue for several months, he projected that nearly all of the volunteer departments would be forced to shut down. He asked the departments be included in stimulus packages, which so far have been geared toward helping businesses stay afloat.

“They have to take care of the people first,” Barry said of legislators. “They have a lot on their plate, too, to provide for the basic human needs of their communities, and fire departments should be right on the top of the list, along with emergency medical services.”

Kelly is also a supervisor in Franklin Township. He said he anticipates the state will pass the cost of volunteer fire departments back to the municipalities.

“If it would come down to a bad situation, and this goes on and on, we’ll figure something out. We’ll never turn our back on the fire departments,” he said.

Otto said the departments do not want to beg for money, but he hopes that residents will become more aware of their costs and financial strain, and those who are able will offer financial support.

“Without anything changing, we’re not going to be around,” Otto said. “Maybe the community can come together and rally and increase their donations. Maybe it’s time that we can rally together and save something that means so much to so many.”

Efforts through legislation and businesses are geared toward helping volunteer fire departments survive through the coronavirus crisis.