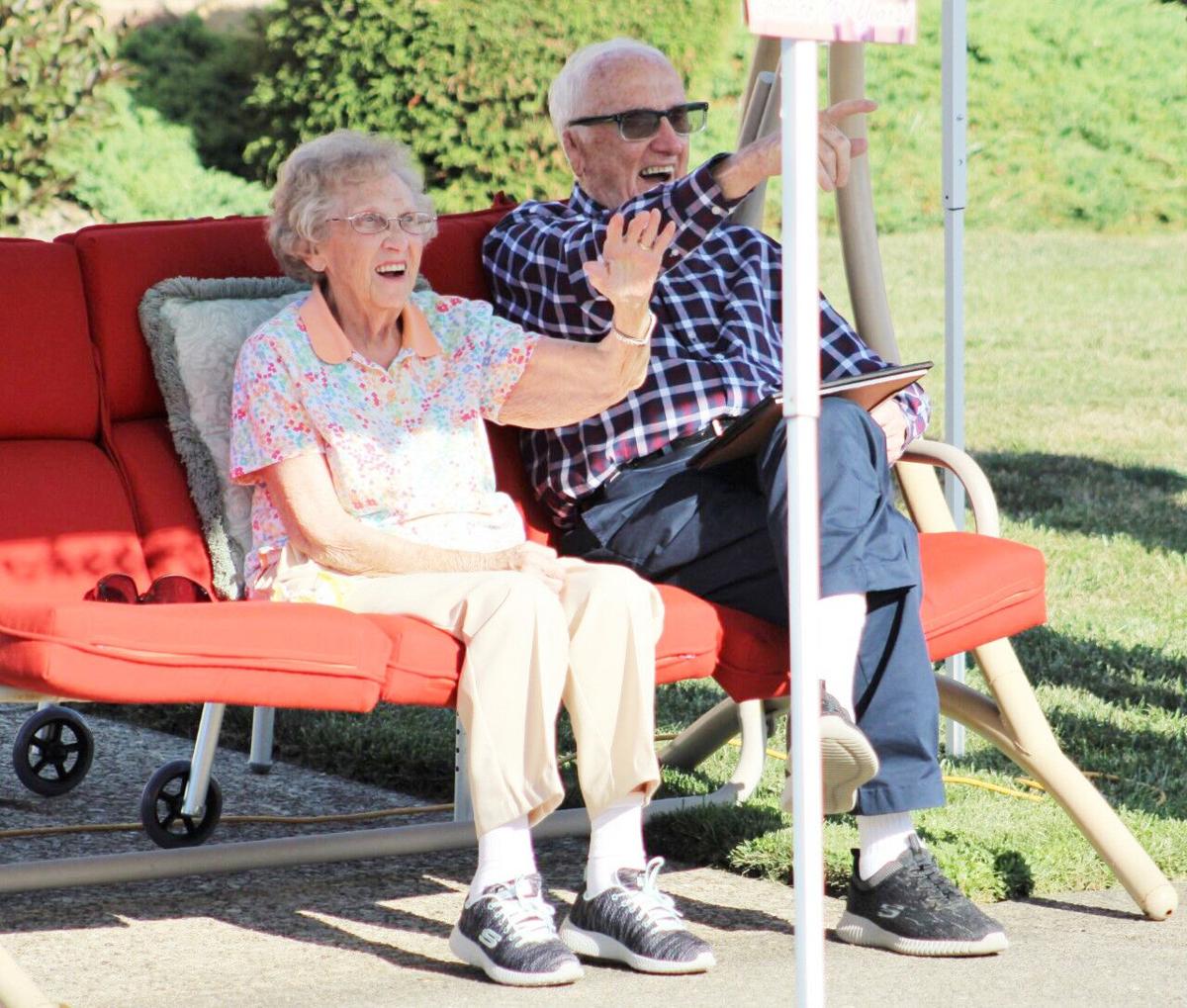 Dorothy and Art McGann wave at the parade of well-wishers in the community driving by in Connellsville last week to celebrate the couple’s 75th wedding anniversary. 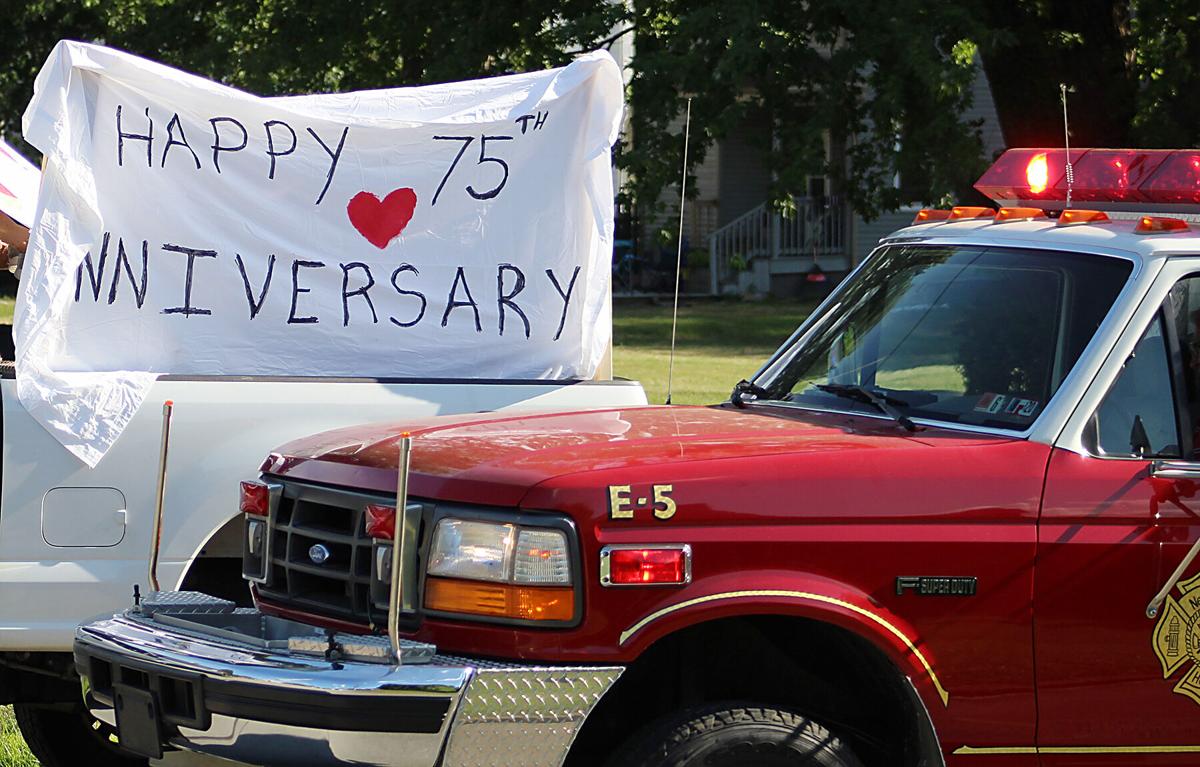 A sign is displayed for Dorothy and Art McGann during a parade of well-wishers in the community driving by in Connellsville last week to celebrate the couple’s 75th wedding anniversary.

Dorothy and Art McGann wave at the parade of well-wishers in the community driving by in Connellsville last week to celebrate the couple’s 75th wedding anniversary.

A sign is displayed for Dorothy and Art McGann during a parade of well-wishers in the community driving by in Connellsville last week to celebrate the couple’s 75th wedding anniversary.

A Connellsville couple received a special anniversary present from their community with a drive-by parade last week.

The idea for the unique celebration for Art and Dorothy McGann came from a conversation Art had with his neighbor, Brent Rockwell, where it was discussed that the couple couldn’t have an anniversary party because of COVID-19 restrictions.

“My husband and I, along with a few other families in our neighborhood, have in the past had cake or pie to celebrate Art and Dorothy’s anniversary, but due to COVID, that wasn’t going to be able to happen this year,” said Tawnya Rockwell, Brent’s wife.

At one point, Art said to Brent if anyone wanted to wish them a happy anniversary, they could just drive by and wave from their cars.

“Then I thought, let’s do a parade instead of a drive-by and get the city involved with it,” Brent said.

Brent then took the idea home to Tawnya, who loved it.

Connellsville Mayor Greg Lincoln said he received a message from Tawnya about seeing if a drive-by parade could be arranged to celebrate the couple’s anniversary.

“The McGanns are beloved in the city,” Lincoln said, adding that he had the honor of marching with Art, a World War II Air Force veteran, in the city’s condensed Memorial Day March in May. “So I immediately texted our city clerk, Vern Ohler, about the plan.”

Ohler told Lincoln the plan could be done, and Lincoln enlisted the help of the city’s police and fire chiefs and posted messages on social media about the idea, adding that anyone who wanted to take part and wish the couple a happy anniversary could line up along Newmeyer Avenue like they were preparing for an evening parade.

“Everything just came together,” Lincoln said, adding that they were able to write up a proclamation from the city to the McGanns.

“They went way out for them,” said Tina Casey, the couple’s niece.

Casey was with the McGanns in their front yard along with the Rockwell prior to the start of the parade of which Art and Dorothy knew nothing about.

“They knew a parade was coming, but they didn’t know the extent of it,” Brent said.

Art McGann said Dorothy asked him why was there a canopy near their yard with an American flag and an Air Force flag on it, and Casey told them that they’ll find out shortly.

Then four fire trucks drove past their home followed by a police car where Lincoln exited and read the proclamation, then a parade of nearly 70 vehicles followed.

“I didn’t think anything like that would have happened,” Art said, adding that he and Dorothy have good neighbors who started it all and made it a complete surprise. “It was quite the ordeal.”

Brent said everything came together quite well from the classic cars in the parade to Stefano’s Printing producing a poster of the couple when they were married--all within a span of a couple of days.

“I didn’t think it would be that big—just a couple of cars,” Casey said, but added that the whole event was well deserved for her aunt and uncle. “They’re pretty special people, and it’s nice to see young people looking out for the older people.”

“We’re just so grateful to live in such a tight-knit community that really pulled together to make such a special day even more special for our wonderful neighbors, Art and Dorothy,” Tawnya said. “They are so incredibly special to us and as you can tell from the outcome of this event, they are also extremely special to so many others.”

“Dot and Art were so overwhelmed with the outpouring of support and love,” Lincoln said, adding he was happy their anniversary was celebrated in the way that it deserved to be. “I told them this is one of the many great things about living in a wonderful community. It was a great night in the city.”

Both Art and Dorothy McGann will turn 96 years of age this summer and have two sons that live in South Carolina, and Art shared the secret of making a marriage last for so long.

“Make sure you get up every morning; if you don’t get up, you’re gone,” he said and laughed. “Every marriage has ups and downs, ins and outs; you solve all those problems and live for another day. We were very fortunate, and we still are.”