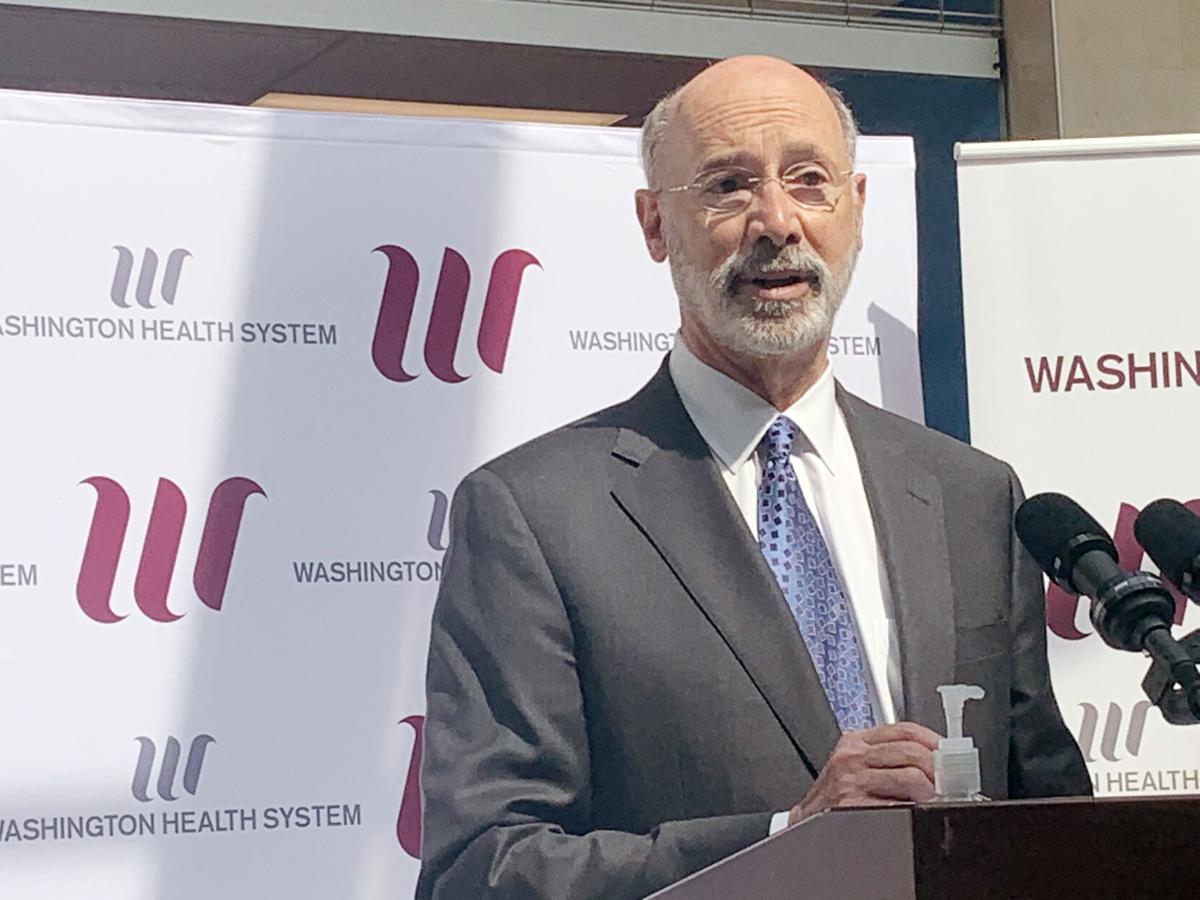 In a file photo from last month, Gov. Tom Wolf talked about Pennsylvania’s vaccine distribution and addressed vaccine hesitancy during his visit to Washington. On May 4, the Wolf administration announced plans to lift mitigation orders by Memorial Day, with the exception of face mask requirements. (Photo by Karen Mansfield)

Patrons seated at outdoor tables at a restaurant converse and dine without masks Sunday in Boston.

In a file photo from last month, Gov. Tom Wolf talked about Pennsylvania’s vaccine distribution and addressed vaccine hesitancy during his visit to Washington. On May 4, the Wolf administration announced plans to lift mitigation orders by Memorial Day, with the exception of face mask requirements. (Photo by Karen Mansfield)

Patrons seated at outdoor tables at a restaurant converse and dine without masks Sunday in Boston.

The Gov. Tom Wolf administration said Tuesday it will lift COVID-19 mitigation on Memorial Day with the exception of the face mask order.

The face mask requirements will be lifted once 70% of adults are vaccinated against the virus and according to future guidance from the Centers for Disease Control and Prevention, the state Health Department said.

“We continue to make significant progress in the fight to stop the spread of COVID-19, and as more Pennsylvania adults get vaccinated and guidance from the CDC evolves, we can continue to move forward with our reopening efforts,” Acting Health Secretary Alison Beam said in a news release.

Hitting that 70% threshold in order to remove the mask mandate may prove to be difficult, though, as vaccination rates appear to be declining.

Curtis Pharmacy held another mass vaccination clinic Tuesday at the Washington County Fairgrounds for people looking to receive either their first or second dose. But next Tuesday’s clinic will be the last one held at the fairgrounds and focus mainly on people who need their second Moderna shot.

Tina Cushey, co-owner of Curtis Pharmacy, said they’re struggling to fill all of the slots as the number of people who want to get vaccinated is declining.

“It’s kind of slowing down,” she said while administering doses inside one of the halls at the fairgrounds.

Tuesday’s announcement will lead to the return to full capacity at restaurants and bars, something that has caused financial ruin to many businesses and countless job losses, said Chuck Moran, executive director of the Pennsylvania Licensed Beverage and Tavern Association.

“But now the time has come in which we can move into a full recovery mode. It’s time to make the comeback greater than the setback,” Moran said.

It should also help businesses in the entertainment industries that were mostly shuttered during the worst of the pandemic.

Erica Miller, executive director of the State Theatre in Uniontown, sounded an optimistic tone about Wolf easing restrictions, although she wanted to know if any rules could remain in place besides the mask mandate.

“Is everything lifted? I know the masks aren’t,” Miller said Tuesday after finding scant details on the state Department of Health’s website. “I want to see more details about what this announcement actually is.”

The theater had planned to resume its summer musicals in July, so the changes undoubtedly will help with that effort. She’s hopeful that it’s another step toward a return to normalcy as more people feel safe to get out of the house and attend performances at the theater.

“I do think people are wanting to go places again, and certainly our patrons have expressed interest to us in coming back to the theater,” Miller said. “Anything that is a step toward more normalcy is a step for the State Theatre to presenting shows as we are used to. It sounds good to me.”

State Rep. Tim O’Neal, who is a member of the state’s COVID-19 task force, said the Tuesday order will return theaters to full capacity.

He said the lifting of mitigation will solve one of the biggest issues – the feeling of uncertainty – and lead to the “light at the end of the tunnel.”

“I’m thrilled after more than a year that we are able to lift these restrictions so that we can move to more normal life,” said O’Neal, R-South Strabane Township. “This will help grow our economy and assist our small businesses that have sacrificed so much due to COVID-19.”

However, the mask mandate may be a different situation.

“I’m glad to see we are starting to get back to what we all call a normal way of life,” Irey Vaughan said.

New cases and hospitalizations related to the virus were continuing to decrease in Pennsylvania, the state Health Department said.