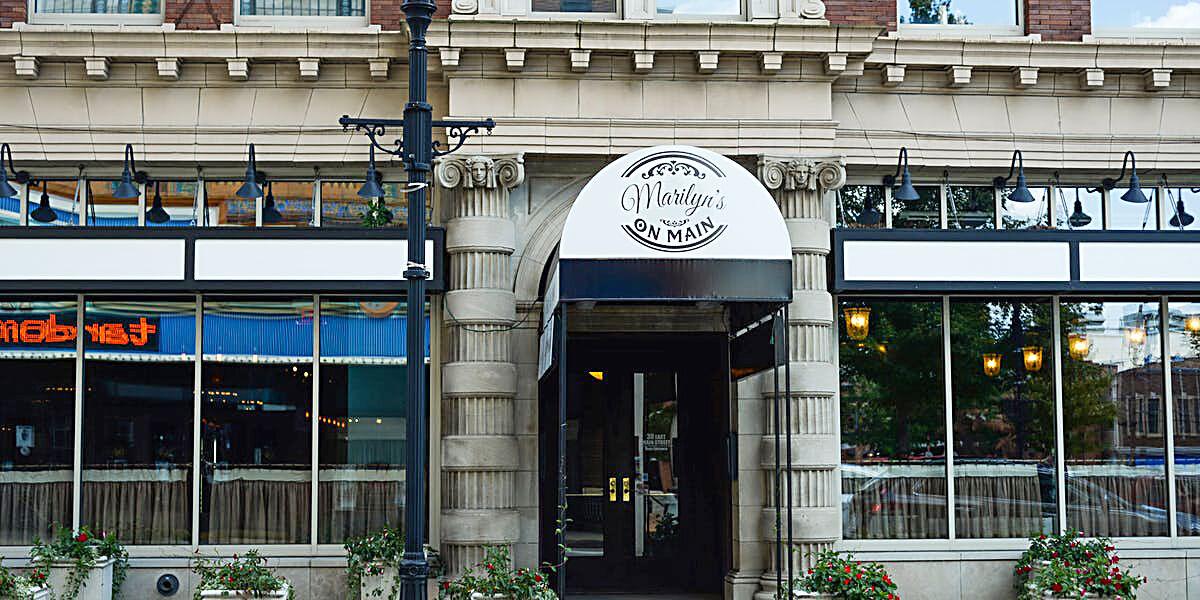 John Cellurale, the owner of Marilyn’s on Main in Uniontown, said such funding like what’s given in the RESTAURANT Act is what many restaurants need as their money is expected to be gone by mid August. 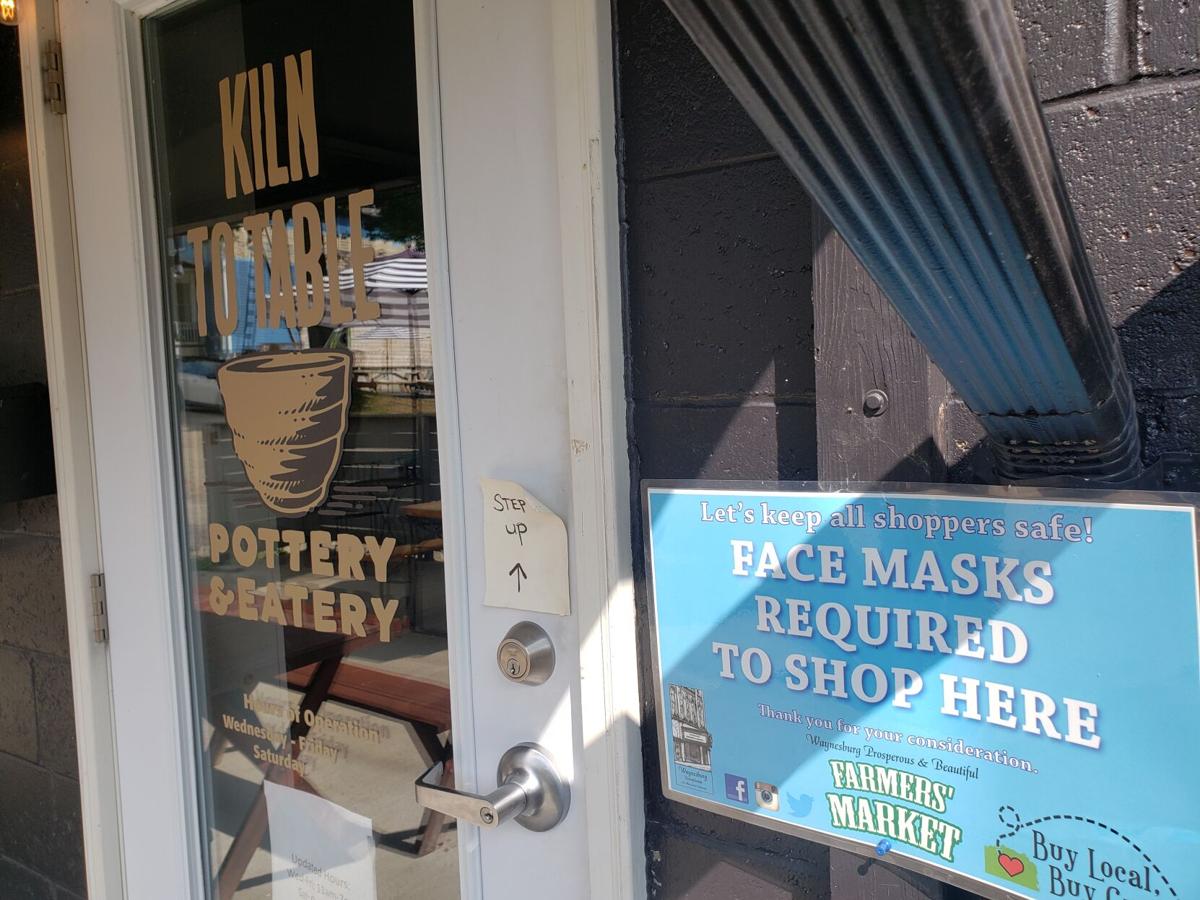 Jennifer Adamson, owner of Kiln to Table in Waynesburg, said capacity limits have prompted additional investments like an outdoor dining area and a food cart. 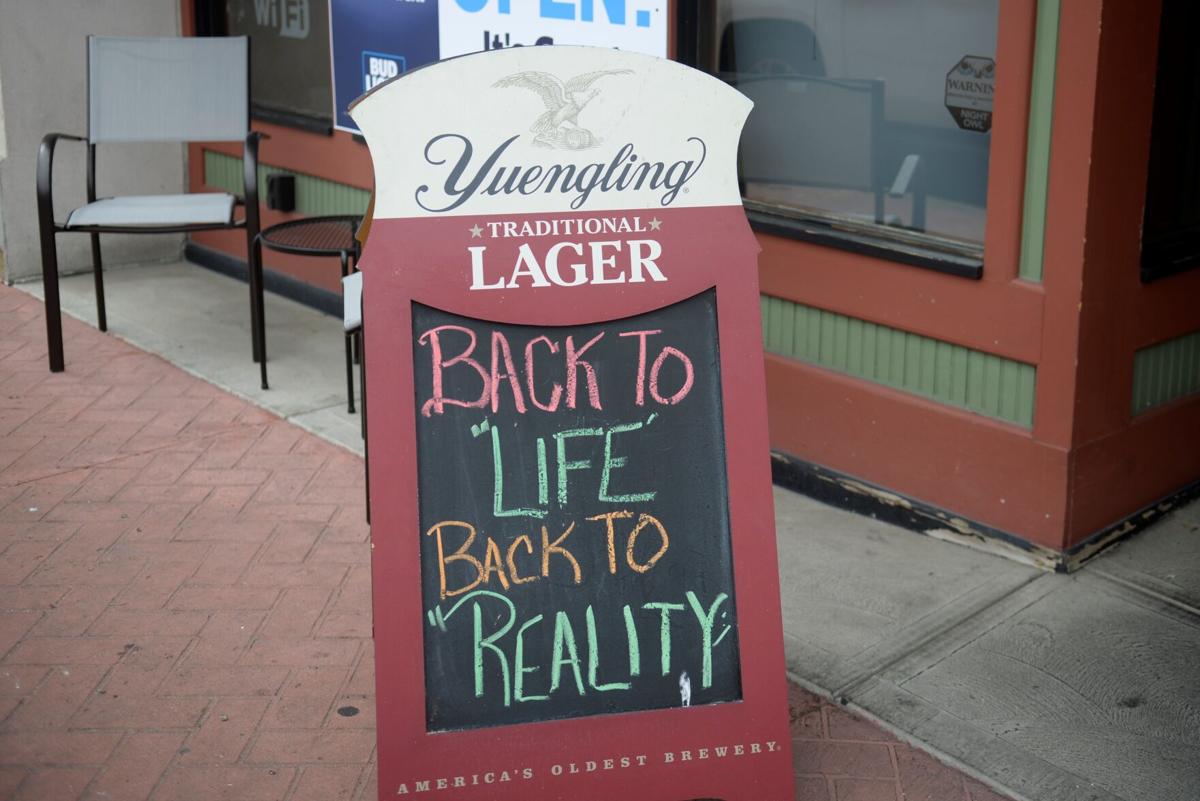 In this June 8 file photo, a sign outside Rizz’s on Uniontown’s Main Street celebrates the region entering the green phase of the coronavirus mitigation efforts.

John Cellurale, the owner of Marilyn’s on Main in Uniontown, said such funding like what’s given in the RESTAURANT Act is what many restaurants need as their money is expected to be gone by mid August.

Jennifer Adamson, owner of Kiln to Table in Waynesburg, said capacity limits have prompted additional investments like an outdoor dining area and a food cart.

In this June 8 file photo, a sign outside Rizz’s on Uniontown’s Main Street celebrates the region entering the green phase of the coronavirus mitigation efforts.

Local business owners are preparing to accommodate yet another change in COVID-19 regulations, and said their industry is being unfairly targeted even as capacity limits are eased.

“Every day, instead of getting up, getting my kids ready to go to school, and going to work, I’m getting up and reading my email to see what the new regulations are and seeing what could I do yesterday that I can’t do today,” said Ben Venick, owner of Rizz’s in Uniontown. “Can I serve a customer a beer or do I have to serve them cheese sticks with it? That’s the new normal. It’s something new every day.”

Gov. Tom Wolf recently announced restaurants may increase indoor dining capacity to 50% from 25% beginning Sept. 21, but to do so, owners must complete an online self-certification process by Oct. 5, called the Open & Certified Pennsylvania program. Alcohol sales also must end at 10 p.m.

Certified businesses will receive display documents and appear in an online database. The statement is subject to penalties for unsworn falsification to authorities, a second-degree misdemeanor.

“What other business owner in American is looking at a misdemeanor charge for operating your business?” John Cellurale, owner of Marilyn’s on Main in Uniontown, asked.

He said he has concerns that new requirements will be added between Sept. 21 and Oct. 5, and feels he is being asked to sign a statement without knowing what it contains under threat of criminal action. The self-certified restaurants will be checked for compliance beginning Oct. 5.

“It’s no different – and I hate to say it this way – than the Gestapo coming out and verifying that you’re open and certified,” he said.

Cellurale and Venick questioned why the same rules do not apply to other businesses, like grocery and home goods stores.

“There is absolutely no equality whatsoever in this,” Cellurale said.

He gave an example of a person going through a dozen packages of bacon at a grocery store, and said no employees will show up behind them to sanitize the goods. Venick also said the industry is being subjected to regulations unlike any other type of business.

Cellurale questioned why enforcement isn’t targeted in problem areas, such as college towns and big cities with high numbers of cases of the virus. He said nuisance bars and restaurants should be subject to enforcement instead of requiring adherence to sweeping and changing guidelines. At his restaurant, he said they have exceeded requirements, such as raising the temperature of their dishwashers and other mitigation efforts.

“We’ve gone above and beyond on what the state wants us to do, but yet we’re subject to the same regulations as Philadelphia, State College, Pittsburgh,” he said.

He added he lost money when the state ordered restaurants cut indoor capacity from 50% to 25%. He had just placed a food order when he learned the capacity was reduced starting the next day.

“The whole thing is a severe joke,” he said.

He opened a second restaurant in Morgantown, where restrictions are less tight, in May. The new restaurant has helped make up for unpredictable revenue at the Uniontown restaurant. Venick said business has been going well despite the changing regulations.

“We had to reinvent the wheel. I’ve lost my bar business, but I’ve gained my to-go business. I opened on Saturdays for breakfast. My outside patio has not skipped a beat. We’ve just been rocking and rolling with that,” he said.

Cellurale said he worries about whether some restaurants will be forced to close for lack of revenue. He has had discussions with local legislators, he said, and hopes to see action soon.

“Politics move at a slow pace. These are things that can’t take forever. They need to happen now before more businesses close,” he said. “Fayette County can’t afford to lose any more jobs.”

Brady Gaines, owner of Brady’s Roadhouse in Waynesburg, said although he welcomes the capacity increase, other restrictions are still going to continue negatively impacting businesses such as his.

“Brady’s Roadhouse is just in survival mode along with all of the other bars and restaurants in Pennsylvania,” Gaines said. “Every time we think we are taking steps forward, another order gets handed down that puts us in another hole. Fifty percent capacity would be great, but the additional restrictions that are placed with it just set us back even more than before.”

The 10 p.m. cut off for alcohol service means the bar will be losing 28 hours of service every week since the majority of its revenue comes in between 10 p.m. and 2 a.m.

“For our bar, the 50% capacity increase does not do us any good if we have to lose our prime revenue times as a result,” he said. “We are just trying to survive, but the governor is making it very difficult on a small business such as ours.”

Jennifer Adamson, opened the Kiln to Table restaurant in Waynesburg in October 2019, less than six months before COVID-19 hit. The restaurant was able to adapt the takeout-only phase of restaurant operations.

“We began serving family-style meals during the initial phase and we were well received and supported by our community, and we implemented high safety protocols that were an investment of thousands of dollars,” she said.

But as restaurants were allowed to reopen, the family-style take-out options were less popular. That led to a $3,000 investment to create an outdoor eating area, she said. The restaurant also started using takeout containers to serve their dishes instead of their signature pottery. Still, she said, sales were down about 35%, prompting another $5,000 investment for a food cart.

Even through the difficult times, Adamson commended her employees for their efforts in keeping the business alive and surviving.

“I have a team of dynamic women who faced each challenge with their commitment to seeing all of us succeed and prosper in the community we love,” she said.

“We took a risk to be in the restaurant industry,” she continued. “This is our hand, and we are playing it to win.”