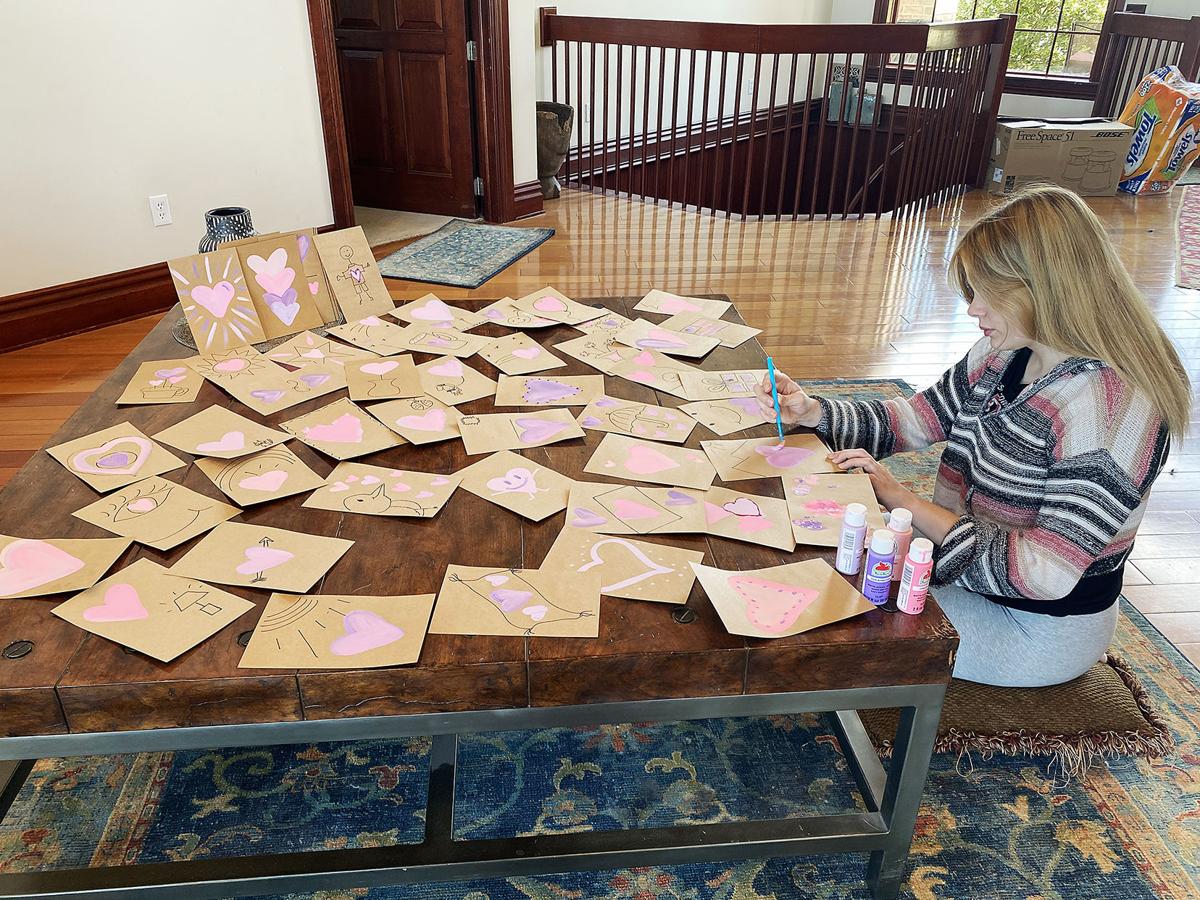 Dr. Karen Crotfcheck’s honors English class at Geibel Junior-Senior High School in Connellsville wrote notes to mothers at a Uniontown personal care home. Her daughter Jenna Croftcheck, a senior at Geibel, painted hearts on cards to affix the notes to them. 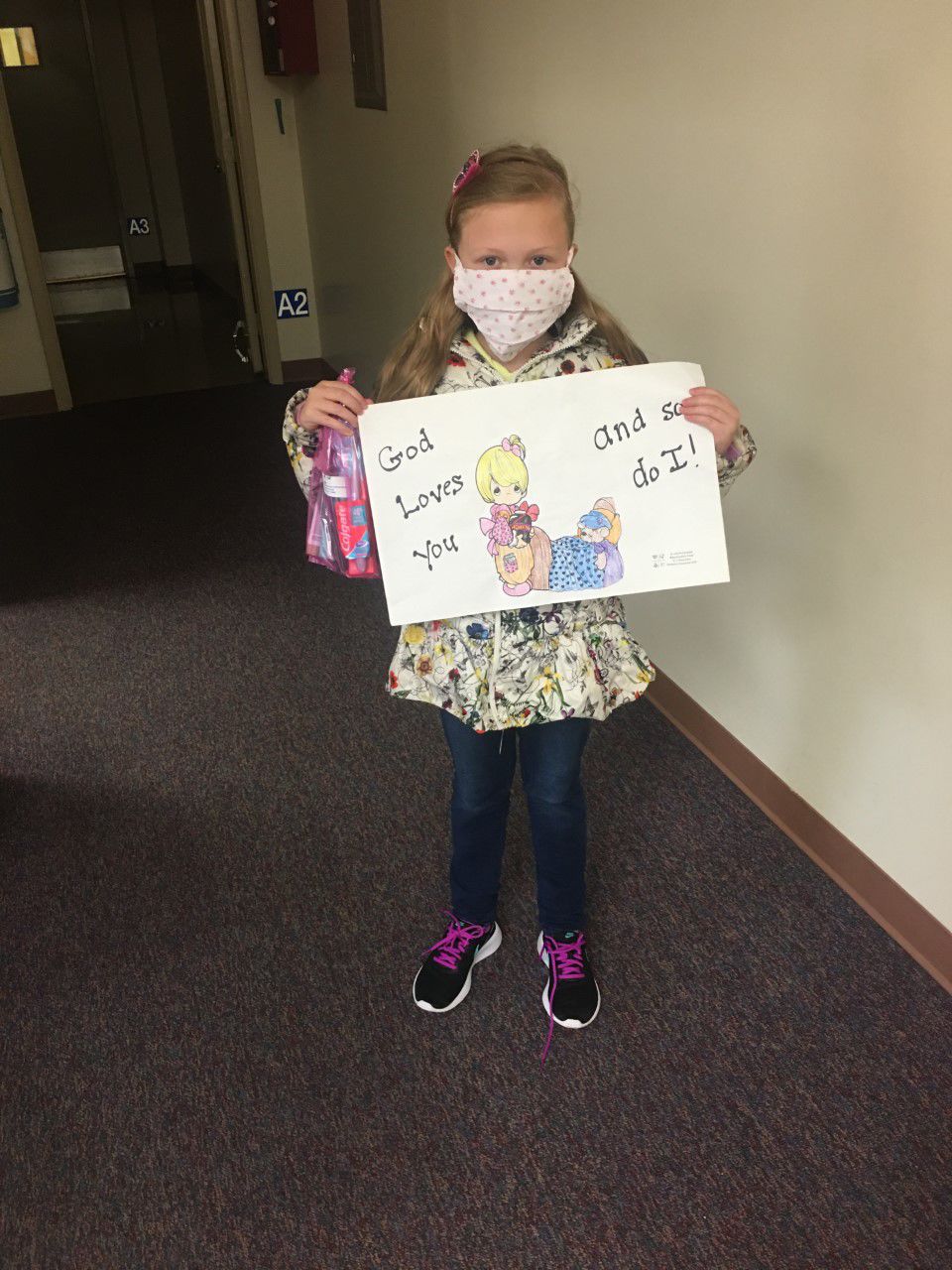 Hadley Murtha, a first grade student at St. John the Evangelist Regional Catholic School in Uniontown, shows the colored drawing and the care package that Cathy Poninsky’s class made to be taken to mothers at Peroni’s Personal Care Home in Uniontown.

Dr. Karen Crotfcheck’s honors English class at Geibel Junior-Senior High School in Connellsville wrote notes to mothers at a Uniontown personal care home. Her daughter Jenna Croftcheck, a senior at Geibel, painted hearts on cards to affix the notes to them.

Hadley Murtha, a first grade student at St. John the Evangelist Regional Catholic School in Uniontown, shows the colored drawing and the care package that Cathy Poninsky’s class made to be taken to mothers at Peroni’s Personal Care Home in Uniontown.

Teachers at St. John the Evangelist Regional Catholic School in Uniontown and Geibel Catholic Junior-Senior High School in Connellsville said they wanted to help spread love and care to those mothers who won’t be able to receive visits due to COVID-19 restrictions.

This year, Poninsky’s class of 27 students took part in projects for residents at Peroni’s Personal Care Home in Uniontown.

Originally, the class intended to take the packages, which include placemats with pictures colored by the students, to the personal care home for Easter. When COVID-19 forced schools to close, those deliveries didn’t make it.

However, Poninsky said, she was allowed in the school last week and gathered those projects to take to Peroini’s for Mothers’ Day.

“This is very much appreciated by them,” said Lynette Wene, administrator at Peroini’s Personal Care Home. “It’s a hard time for them with no visitors.”

Wene said residents typically have frequent visitors, and missing out on that has made the past few weeks an especially hard time for them.

She said they’ve been doing what they can to accommodate all involved by setting up a Facebook page so residents and family members can see each other. Some family members also go to the windows to look in and wave at their loved ones or blow kisses to them.

“It definitely helps that people are on the outside and thinking about them by sending them something,” Wene said. “They love this kind of stuff.”

Students in Dr. Karen Croftcheck’s ninth-grade Honors English class at Geibel sent love to mothers at LaFayette Manor in Uniontown in the form of notes pasted onto hearts.

Gracie Rodriguez, 15, of Monongahela said her note reminded mothers that there is always someone out there thinking about them, praying for them and remembering them even if they’ve never met.

“I thought it was a good thing to do,” Rodriguez said. “It was something nice out of our hearts to do.”

“I feel really bad for the people in the nursing homes and people can’t visit them,” said student Grace Cline, 16, of Bullskin Township. “So I wanted to help cheer them up.”

Cline said she wrote a little about herself and her cat “Lucy” in her letter. She said she hoped whomever received her letter finds love and joy on Mothers’ Day.

“It warms my heart to do this, and I hope it helps someone, especially on Mothers’ Day,” Cline said, adding that she has done similar projects through her church.

Jillian Balena, 15, of Connellsville said she had also done similar projects when she attended Conn-Area Catholic and students wrote to veterans and others, but said she really loves her mother and wanted to show gratitude to all mothers out there because they do so much.

“I wrote that I think moms are special and deserve a day where they’re appreciated,” Balena said. “It makes their day, and it makes my day.”

Croftcheck printed out the letters, and with the help of her daughters, glued them to cards with hand-painted hearts.

Mary Novisel, activities director at LaFayette Manor, said cards like that are especially important to keep residents’ spirits up.

“It means a lot to the residents,” Novisel said. “Any little bit of outside life helps them make it through the day.”

She said LaFayette Manor recently held 15-minute “window visits” with mothers and their families. While they were separated by glass, Novisel said seeing family members was a help to the residents. Smiles, she said, abounded.

The manor has taken advantage of technology to keep residents and families connected, but it isn’t quite the same, Novisel said.

In challenging times, kind acts like making cards have shown how many people care for those around them.