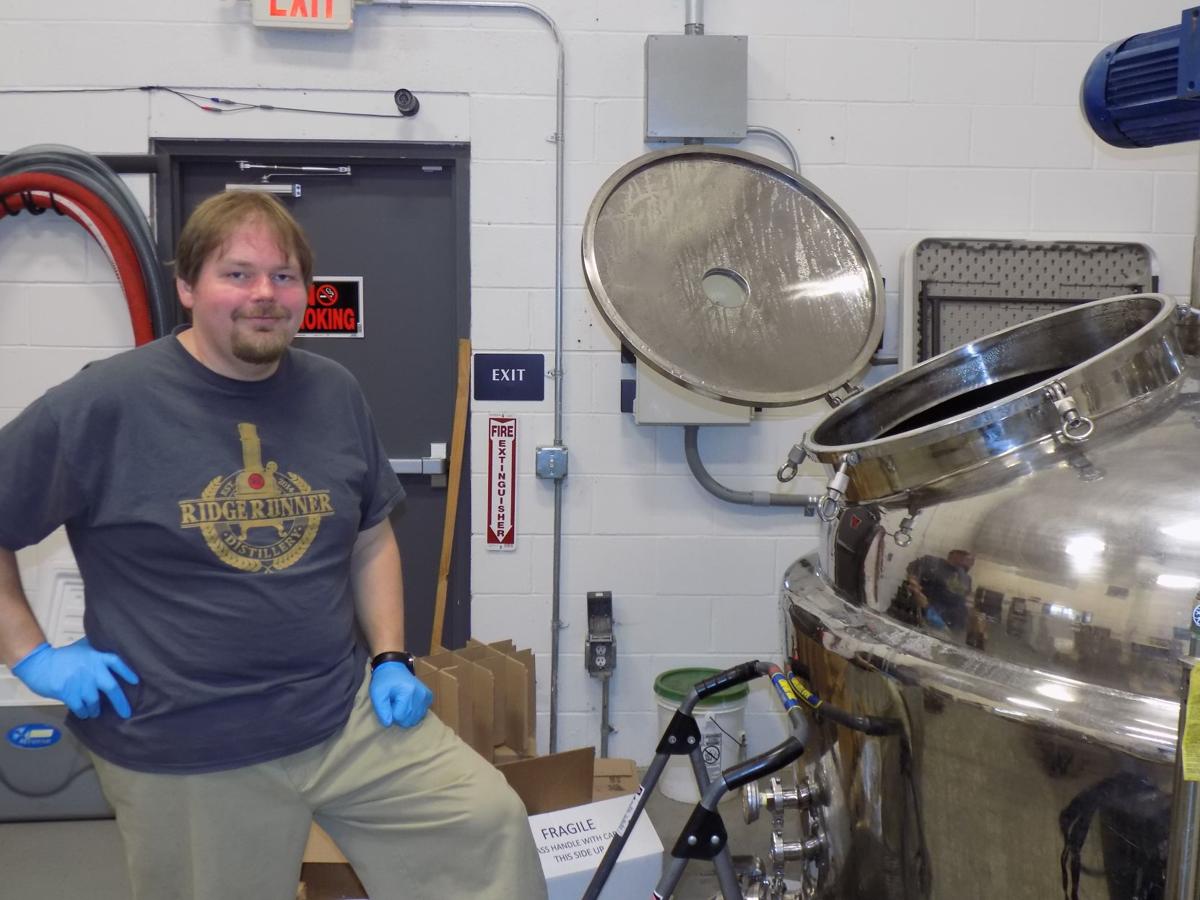 Christian Klay, who owns Ridge Runner Distillery with his wife Tia Klay, stands by a vat of hand sanitizer, targeted for donation to area organizations who need it urgently during the COVID-19 crisis. 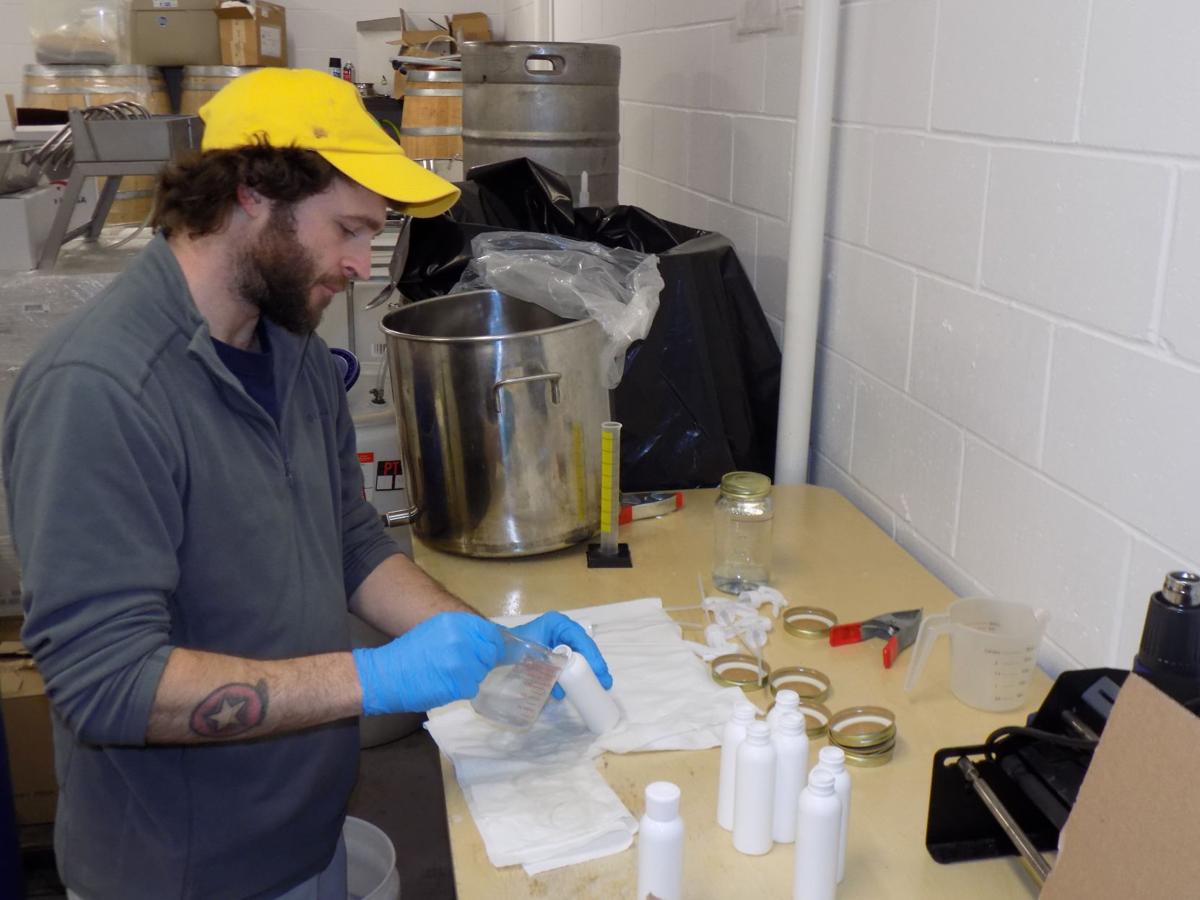 Christian Klay, who owns Ridge Runner Distillery with his wife Tia Klay, stands by a vat of hand sanitizer, targeted for donation to area organizations who need it urgently during the COVID-19 crisis.

Ridge Runner Distillery, in Chalk Hill, has been churning out gallons of hand sanitizer this week for hospitals, first responders and others in extreme need in the midst of the COVID-19 crisis.

“This is just an unprecedented situation for everyone,” said Klay, who owns Ridge Runner Distillery with his wife Tia Klay. “I really feel lucky to have an opportunity to contribute and hopefully make a difference – even if it’s a very small one.”

Local organizations are participating in a statewide – and ultimately national – effort to help local businesses reshape their production processes to produce items needed during the COVID-19 crisis.

“The major focus is on personal protective equipment and first responders, whose current efforts are nothing less than heroic,” said Bob Shark, executive director of the Fay-Penn Economic Development Council.

Shark said businesses interested in participating are asked to reach out to Barry Wickes, with the state Department of Community and Economic Development, at bwickes@pa.gov or 717-214-5373. The state has noted a number of items in need, including various forms of masks, goggles, gloves, protective suits and gowns, booties and shoe covers, head covers, sanitizing wipes and other objects.

Shark said resources to help small businesses are becoming available at various levels of government and also from private organizations.

“The local chambers of commerce, our elected officials, and Fay-Penn are doing our best to get the word out about these programs,” he said. “Fay-Penn has staff specifically dedicated to helping local businesses through any application process with any of these programs.”

Muriel Nuttall, executive director of the Fayette Chamber of Commerce, said the Chamber – along with other local organizations – has worked closely with Fay-Penn to spread word about the need for supplies during the COVID-19 crisis.

Nuttall and Leanna Spada, executive director of the Mon Valley Regional Chamber of Commerce, both stressed, too, the important role chambers of commerce play in dispensing information that can help businesses in these times.

“They’re worried,” Spada said. “They’re not sure where they’re going to be at the end of this.”

Klay, at Ridge Runner Distillery, is working on securing possible government assistance as he and staff members produce hand sanitizer. But while those details are being worked out, he’s tapping donations from a GoFundMe page to help pay staff members and continue production. The staff numbers five people, including Klay and his wife.

“I just don’t feel comfortable charging people,” he said. “That’s where the GoFundMe comes in.” People seeking the page can go to https://www.gofundme.com/f/help-ridge-runner-distillery-make-hand-sanitizer.

Klay said the business is operating at a quarter of what it usually does, as it weathers the hit from COVID-19 that other small businesses are also enduring.

The sanitizer itself, Klay said, is made with about 80% neutral spirit, a high-proof alcohol. Much smaller amounts of hydrogen peroxide and glycerol also go into the mixture. Klay said the distillery follows World Health Organization standards in creating the sanitizer.

The glycerol, Klay noted, is tough to come by. The high-proof alcohol is also in high demand, but Klay said he’s able to make some of that at the distillery. He said he can make 30 to 40 gallons a week on his own.

Challenges to the production lie more with securing sufficient quantities of the alcohol and glycerol, Klay said, than with the process itself.

“It’s no more complicated of a process than making any of our flavors,” he said.

Klay said Ridge Runner Distillery has given away about 50 gallons of hand sanitizer so far, and he was working on orders that would soon double that total. He stressed that hospitals and first responders in the geographic area take first priority, and he encouraged people in other areas to reach out to other nearby distilleries for hand sanitizer. He said distilleries throughout the state were engaging in this kind of production.

Klay noted that his father, Dr. John Klay, understands deeply the feeling of helping people in urgent need. John Klay is a cardiothoracic vascular surgeon in Wheeling, West Virginia, his son explained. That feeling of delivering urgent help is something Christian Klay shares more and more with his father these days.

“I feel like I might have tasted a teeny percentage,” Christian Klay said, “of the kind of satisfaction he gets when he does a successful operation.”