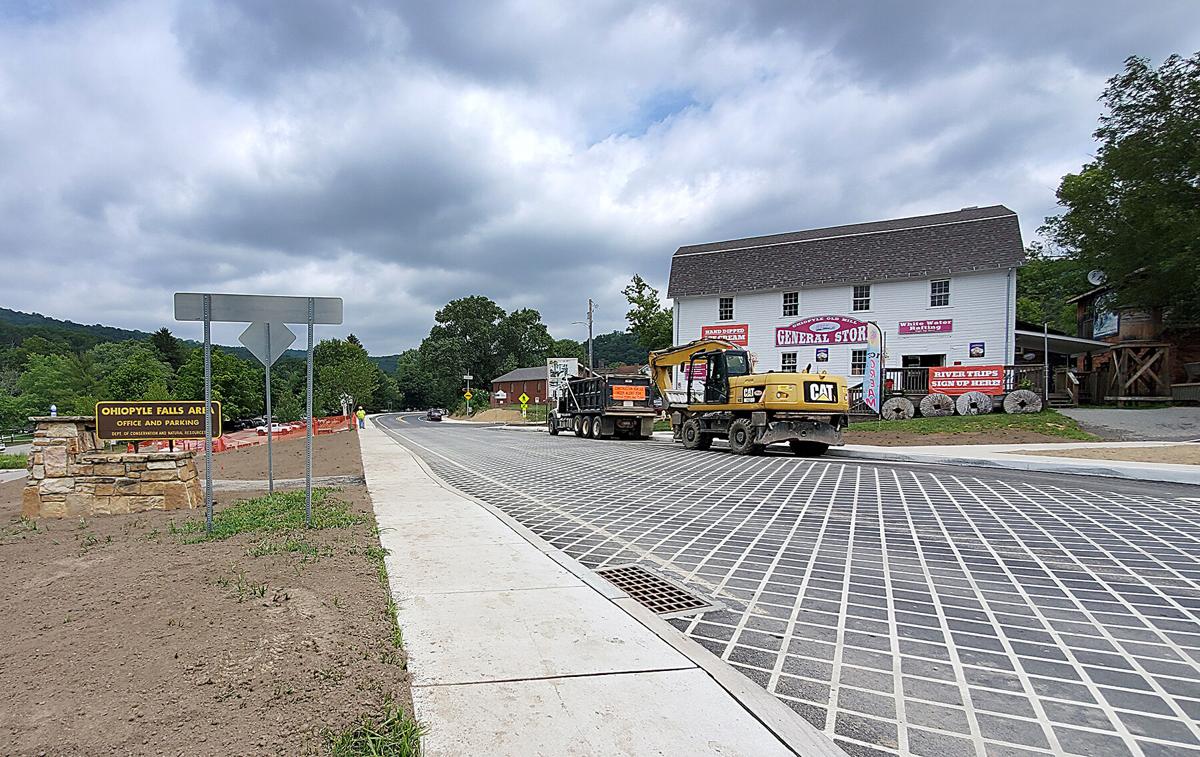 Road construction workers put the finishing touches on the OMG Project in Ohiopyle. 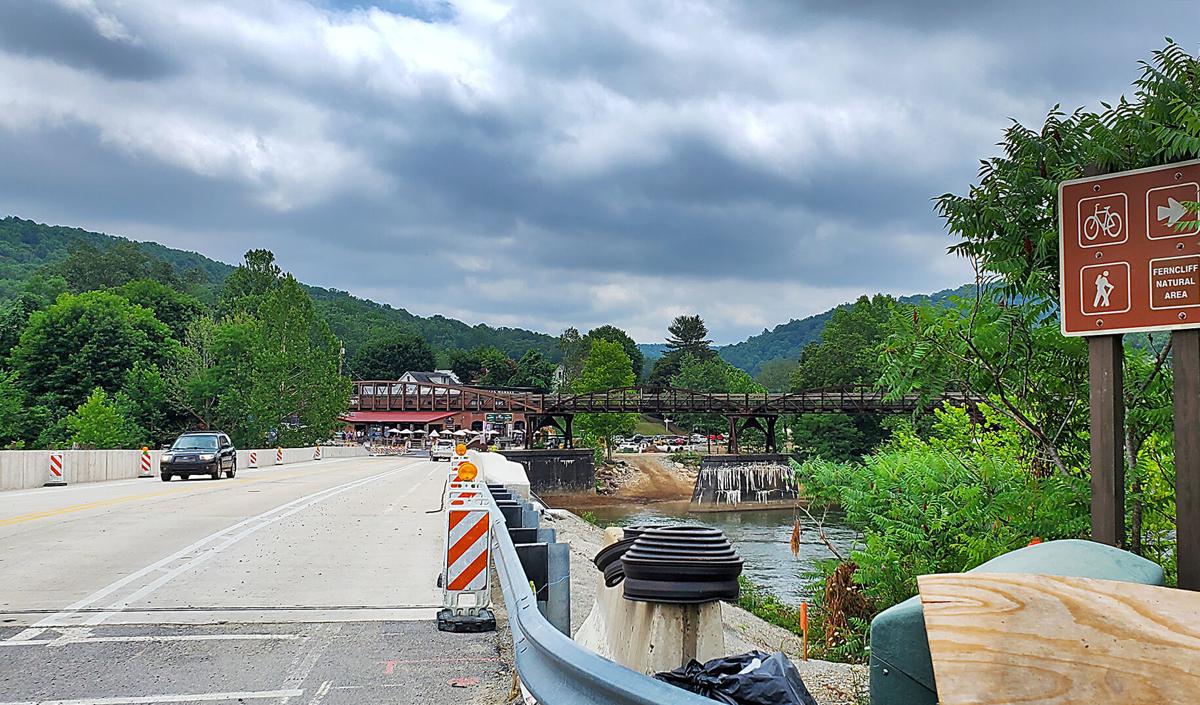 The finishing touches are being applied to the bridge that carries Route 381 over the Youghiogheny River in Ohiopyle. 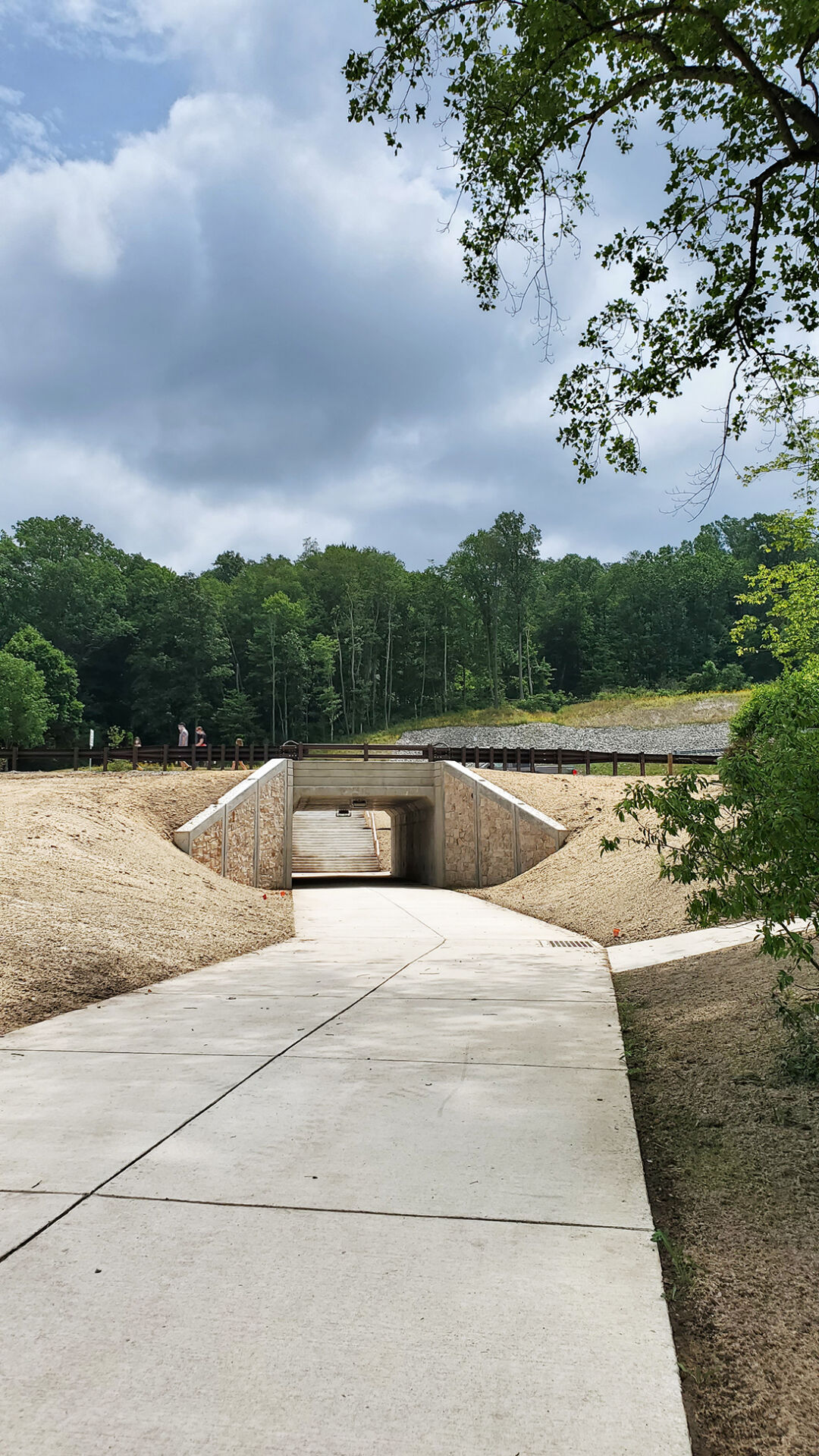 Pictured is the new underpass that Route 381 passes over in Ohiopyle. According to PennDOT, the underpass provides a safe way for pedestrians and kayakers alike to access the Visitor Center, waterfalls and points west of Route 381.

Road construction workers put the finishing touches on the OMG Project in Ohiopyle.

The finishing touches are being applied to the bridge that carries Route 381 over the Youghiogheny River in Ohiopyle.

Pictured is the new underpass that Route 381 passes over in Ohiopyle. According to PennDOT, the underpass provides a safe way for pedestrians and kayakers alike to access the Visitor Center, waterfalls and points west of Route 381.

The executive director of the Pennsylvania Department of Transportation’s District 12 said a massive multimillion-dollar construction project involving major improvements to Ohiopyle State Park and its surrounding area is ongoing, and also provided updates on the project’s many initiatives.

In PennDOT District 12’s July progress report, District Executive Director William Kovach said the $12.4 million Ohiopyle Multimodal Gateway Project, which was approved to continue despite the COVID-19 pandemic, is making great strides and will greatly benefit the area when it is completed.

“Ever since groundbreaking ceremonies in November 2018 kicked off construction of the $12.4 million OMG project, the landscape in and around Ohiopyle Borough and the Ohiopyle State Park has been undergoing major changes,” Kovach states in the report. “These changes will better serve all users who frequent the park as well as all modes of travel through the area.”

Kovach explained that the OMG project, which passes through both Ohiopyle Borough and Ohiopyle State Park, is a collaborative effort between PennDOT and the state Department of Conservation and Natural Resources.

The goal of the project, he states, is to provide safety enhancements and improvements to the Route 381 (Main Street) corridor while minimizing conflict points between motorists, pedestrians, bicyclists, kayakers and rafters.

Previous improvements had been made to this area in past years, and the OMG project now consolidates those efforts while adding more improvements to better serve the many visitors who use or pass through this popular tourist area, he added.

The end result, according to Kovach, will be a cohesive multi-modal corridor “for all of those who come to enjoy the beauty of this area.”

The popularity of Ohiopyle, known for its hiking, biking and rafting adventures, attracts an estimated 1.5 million visitors a year. Not wanting to interfere with the visitors, Kovach said this work was specified to take place over two “unconventional construction seasons” – unconventional being defined in the report as working through the winter months and not working through the summer months.

During the first “season” of the project, November 2018 through May 2019, Sugarloaf Road was relocated to make room for the construction of a brand new “Upper Falls” parking lot. The former alignment of Sugarloaf Road divided this area into two parking lots, which consisted of dirt and gravel parking spaces.

Kovach states that since Sugarloaf Road has been relocated, this new parking area has been reconfigured to provide over 100 parking spaces in one continuous parking lot, consisting of a previous asphalt roadway surface. The parking lot will also provide EV charging stations for hybrid vehicles.

Future plans include construction of a new Visitor’s Change-House to be built by the DCNR in the corner of the parking lot. A unique design feature has the parking lot sitting atop a two-to-three foot deep “reservoir” designed to collect the surrounding surface water after it seeps through its previous asphalt surface, slowly being released into the earth at its lowest level.

As visitors exit their vehicles and make their way into the park, they will notice new sidewalks and stairs leading to the new Route 381 underpass. This underpass, Kovach states in the report, provides a safe way for pedestrians and kayakers alike to access the Visitor Center, waterfalls and points west of Route 381.

“They no longer have to cross in front of moving vehicles in order to do so.” he said.

According to Kovach, other construction features and safety enhancements being made during the second year of construction, starting back in September 2019, include the following:

n Superstructure replacement of the Route 381 bridge over the Youghiogheny River. The new bridge deck surface will provide two 11-foot travel lanes as well as a 10-foot wide shared use pedestrian and bike lane on one side of the bridge and a seven-foot wide shoulder area on the other side of the bridge.

n Widening of Route 381 from Sugarloaf Road to the Yough River Bridge to provide both sidewalks and parking spaces to both sides of Route 381.

n Construction of a new bike path, between Sherman Street and the bridge, which will have its own dedicated alignment, not having to share the road with motorists. The surface of this bike path will consist of previous asphalt similar to that of the new Upper Falls parking lot.

According to Kovach, one of the many challenges of working through the winter months involved concrete curing.

“Maintaining the proper cure temperature is critical in ensuring the quality of the concrete and the bridge.” he explained. “To ensure the specified curing temperature of the concrete is maintained between 50 to 80 degrees, the contractor had to “tent-in” the underside of the bridge deck.

Similar arrangements were made for work at the underpass as well. However, as winter was about to turn to spring, the coronavirus pandemic hit Pennsylvania. In conjunction with Gov. Wolf’s order, PennDOT placed construction projects on hold to minimize exposure to all those involved, Kovach states, and on March 17 job operations were paused.

Over the course of the following two weeks, he added, statewide teams were formed consisting of the department working with industry partners to develop a guide to restart highway construction projects, with a focus of avoiding the spread of COVID-19.

In the nine weeks that followed, Route 381 across the Youghiogheny River through the Ohiopyle State Park has reopened to unrestricted traffic flow.

“The sound you hear coming from the project is a collective ‘OMG, what a journey it’s been!’ coming from the project team,” Kovach said. “It’s truly been a collaborative effort for a job well done between the department, its DCNR counterpart, its contractor Plum Contracting, its project designer McCormick-Taylor, Ohiopyle Borough Officials and the many public and private utility companies involved with this project.

“Long live the beauty of Ohiopyle and the roads, bridges and bike paths that get you there,” Kovach concludes in the report.

Jay Ofsanik, acting press officer for District 12, said Wednesday that COVID-19 forced all ongoing PennDOT projects to be suspended, but the district was relieved that the OMG project was permitted to resume weeks later.

“Harrisburg asked us to provide a list of crucial, essential projects, and the Ohiopyle project was definitely on our list,” he said. “It was very fortunate that we were able to get that approved, so we could continue.”

Ofansik said resuming construction enabled the OMG project to continue and it is now nearing the final stage of completion.

“Currently, we are working on bridge railings, drainage, speed bump installation, pedestrian walkways, grass replacement,” he said. “What’s left is mostly cleanup mode. We will work with DCNR to make sure everything is finished satisfactorily.”

Ofsanik said despite delays caused by COVID-19, PennDOT is happy to see the massive project be near completion.

“We believe people will be very pleased with the final results,” he said. “The project took two years of work and saw some unexpected setbacks, but the end results will be enjoyed by residents and visitors for many years to come.”