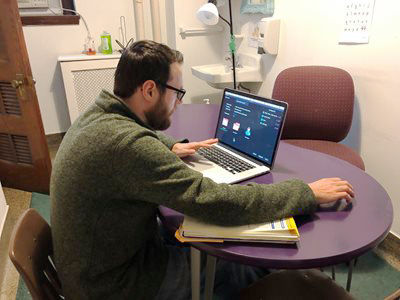 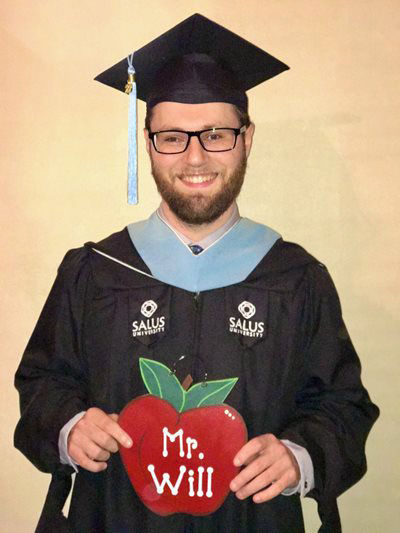 Visually impaired students learned more than academics from William Hanuschock, who has a visual impairment himself. They learned how to advocate for themselves and that no goal is too big or small.

“It allows them to see that your disability doesn’t define you,” said Hanuschock of Uniontown. “You can live your life having a visual impairment and carry on as a perfectly functional member of society.”

The coronavirus pandemic offered Hanuschock an opportunity and a challenge. After graduating from California University of Pennsylvania for his undergraduate degree, he went on to earn his master’s degree from Salus University’s Educators of Children and Youth with Visual Impairments program this spring. During his last semester, he landed an internship at St. Lucy Day School for Children with Visual Impairments in Philadelphia. When he was just a few weeks away from completing his student teaching, the instruction moved online. He set up Zoom accounts for students and teachers, and offered tutorials on the program.

He and the 5th to 7th grade students learned new technology together, and how to learn without hands-on instructions. The students also had to overcome distractions at home, faced by many students who had an abrupt shift in their academic year.

“On the plus side, they became a lot more independent, and they learned to advocate for themselves,” he said.

Students learned to make adjustments for themselves, such as changing font size and screen contrast. It also gave students who are completely blind a chance to focus on learning Braille.

In addition to teaching them math, science and social studies, he also taught a lesson on vision and the anatomy of the eye. This helped students to understand their visual impairments so they can explain it to others. He also taught students to ask for what they need in a classroom. For example, a student with low vision in the left eye might need to sit on the right side of the classroom.

“I remember when I was in school, I hated to ask for help,” he said. “That’s something I want them to know is that asking for help is not wrong.”

Hanuschock has had limited vision since birth. He was born 15 weeks premature. He said some of his students forgot he had a visual impairment, but that just emphasized the fact that disabilities don’t define them.

“I think it was nice for them to be able to say, ‘He has a visual impairment.’ It’s kind of my backbone, having personal experience,” he said. “They say, ‘I can do this too.’”

That experience also helped during his in-person instruction of kindergarten through 7th graders. One student, who had recently gone blind, was having a rough day and broke down in tears during Braille lessons. He took the student aside to talk, and they chatted about his struggles in accepting the new diagnosis.

He also took time during their online classes to talk about the coronavirus when many of the students were feeling anxious.

“Sometimes it was just teaching them about COVID and telling them it would be OK,” he said. “I’m not going to have them worrying and freaking out about COVID, because they’re not going to care about the math.”

That experience taught him flexibility, and he said he learned new things from each of his students.

Hanuschock also wanted to teach his students that all goals are attainable.

“I’d want them to know that no goal is too small. It sounds silly, even if the goal is, ‘I want to walk a mile every day.’ That’s awesome. That’s not a small goal. It’s important for them.”

He said he had another student who wants to be a veterinarian.

“I said, ‘That’s awesome.’ I think wholeheartedly she could do that, and knowing her visual accommodations now can help her set up for the future,” he said.

Hanuschock is back home in Uniontown with his master’s degree program completed, and is currently tutoring students in math. He recently applied for a job as an itinerant teacher with the Western Pennsylvania School for Blind Children, and is hoping for an offer.