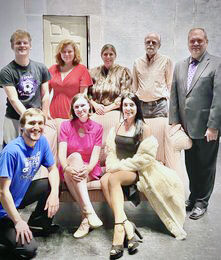 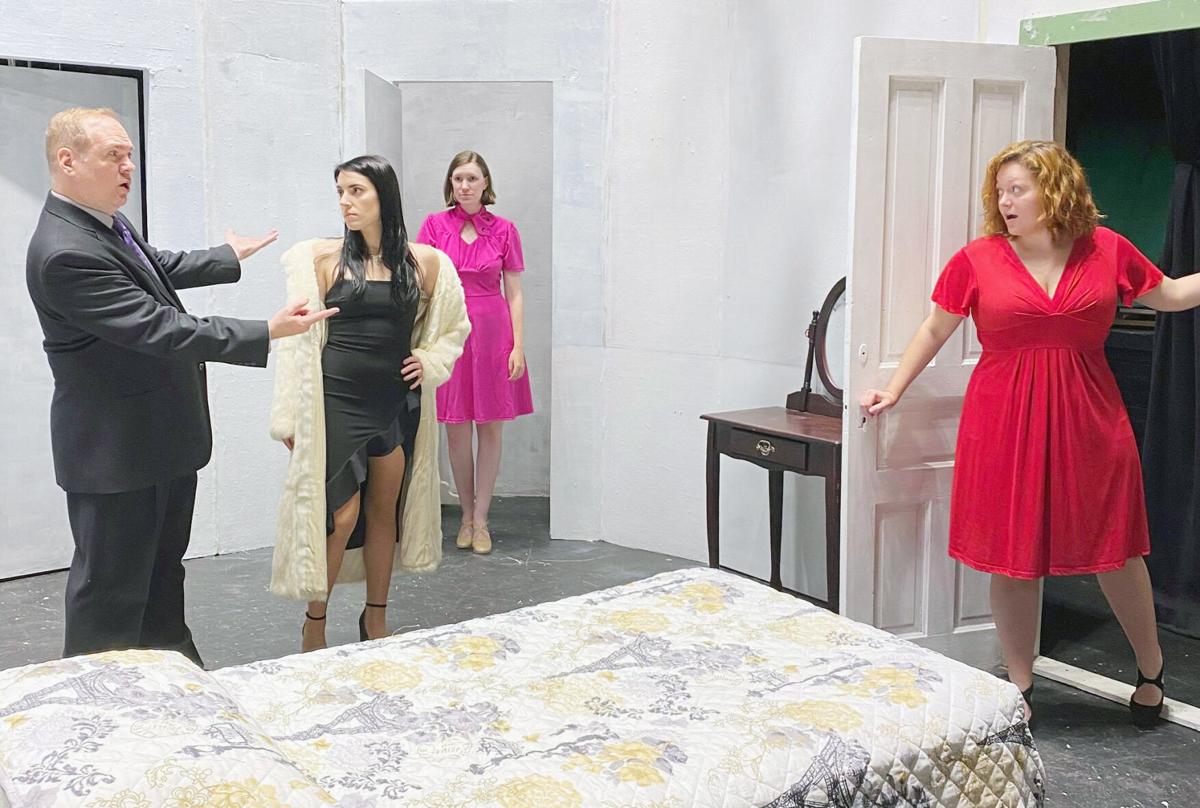 Cast members (from left) Daniel Krack, Rachel Carey, Katie Dunlap and Allison Riddle perform a scene from the Actors and Artists of Fayette County presentation of "Lend Me a Tenor", which will run at the Geyer Performing Arts Center July15 to July 18. 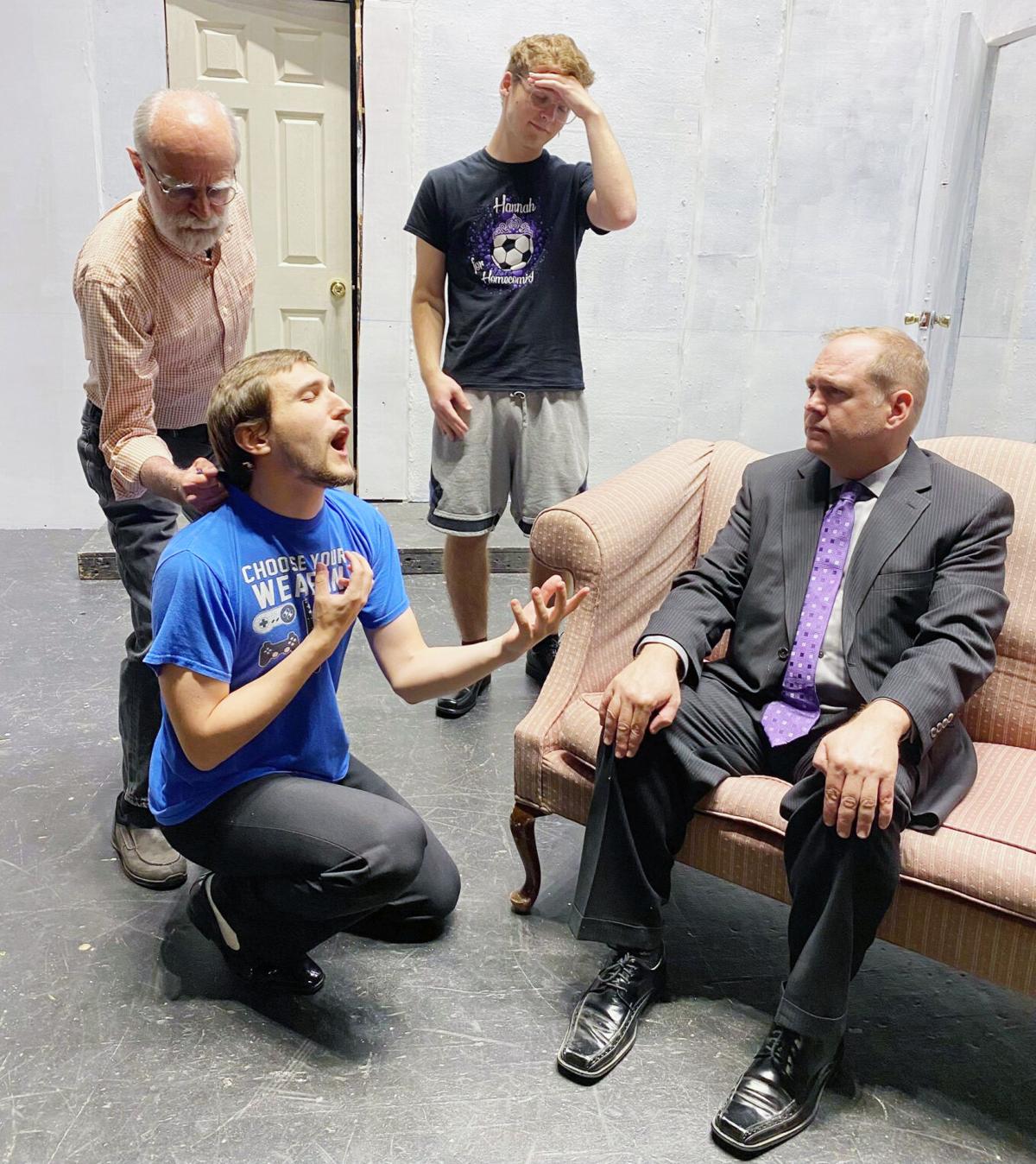 Acting out a scene from the Actors and Artists of Fayette County's production of "Lend Me a Tenor" is (from left) John Henry Steelman, Erik Smith (kneeling), Jonah Harshell and Daniel Krack. The show will run at the Geyer Performing Arts Center from July 15 to July 18.

Cast members (from left) Daniel Krack, Rachel Carey, Katie Dunlap and Allison Riddle perform a scene from the Actors and Artists of Fayette County presentation of "Lend Me a Tenor", which will run at the Geyer Performing Arts Center July15 to July 18.

Acting out a scene from the Actors and Artists of Fayette County's production of "Lend Me a Tenor" is (from left) John Henry Steelman, Erik Smith (kneeling), Jonah Harshell and Daniel Krack. The show will run at the Geyer Performing Arts Center from July 15 to July 18.

The Geyer Performing Arts Center (GPAC) in Scottdale will open its doors for the first time since the start of the pandemic with “Lend Me a Tenor.”

“With reopening the theater, we wanted to start with something light and funny for our audiences,” said Chelsea Conway, the director of “Lend Me a Tenor,” which opens at the center today and continues through Sunday.

The comedy by playwright Ken Ludwig takes place in an Ohio opera house where famed Italian opera singer Tito Morelli is set to star in an upcoming production; however, Morelli is suddenly unable to perform. Not wanting to lose money, the opera house's general manager decides to enlist his assistant, Max, to perform and pretend to be Morelli. But Max's girlfriend is in love with Morelli and doesn't know Max is pretending to be him.

Conway was involved in another Ludwig-written play in 2019, which she explained now seems like a long time ago, given the pandemic .

“I had an absolute blast,” she said of the 2019 show. “His writing is very quick and funny, full of zany characters and plotlines. What ensues is a comedic triumph with mistaken identities, chase scenes and a lot of laughter.”

Conway said coming back to the stage after a year seems like coming out of a deep sleep and having things finally return to normal, since the show, as they say, must go on.

“I am so honored to be at the helm of the first production,” Conway said, adding that the board for Actors and Artists of Fayette County, which produced "Lend Me a Tenor," and the board for the theater, have worked very hard to make sure the production can safely open. “And I am lucky enough to be the first show to showcase their efforts. It feels very surreal at times to be back and, honestly, it feels like we never left.”

The last play that was staged at the theater was the GPAC production of "The Importance of Being Ernest" in early March 2020. Rehearsals for "Lend Me a Tenor" started in the second week of June.

“Everyone was thrilled to be back,” Conway said of the eight actors, herself and assistant director Chris Schaffer. “The energy in that room for that first rehearsal was unlike anything I have experienced.”

Conway said the biggest challenge she faced with the show is the intimate contact intended in the show. There's a lot of kissing that had to be changed because of COVID-19 concerns, and she said making those changes were trying at times.

“I had to work out a lot of scenes to make sure we were not making anyone uncomfortable, as well as staying as safe as possible,” Conway said. She noted that those changes didn't stop the actors from enjoying their roles. “We have had a blast working out certain scenes with the actors to make sure the show is received as well as Ludwig intended.”

Conway is requiring every cast member to use mouthwash before and after they exit a scene -- especially if a kiss is involved -- and hand sanitizer will be placed outside of every exit on the stage. Everything is also disinfected between runs.

For the health and safety of the audience, Conway said the theater's balcony will remain closed, ticketing will be general seating only, the lobby will open early to avoid congestion, masks are discretionary and hand-sanitizer stations have been installed through the building.

Conway also noted that the show replaces the character of Othello with Pagliacci.

“Lend Me a Tenor” will start today and continue through Sunday. Showtimes are 7:30 p.m., today, Friday and Saturday, and Sunday at 2:30 p.m.

Tickets are $12 and can be purchased at www.geyerpac.com.