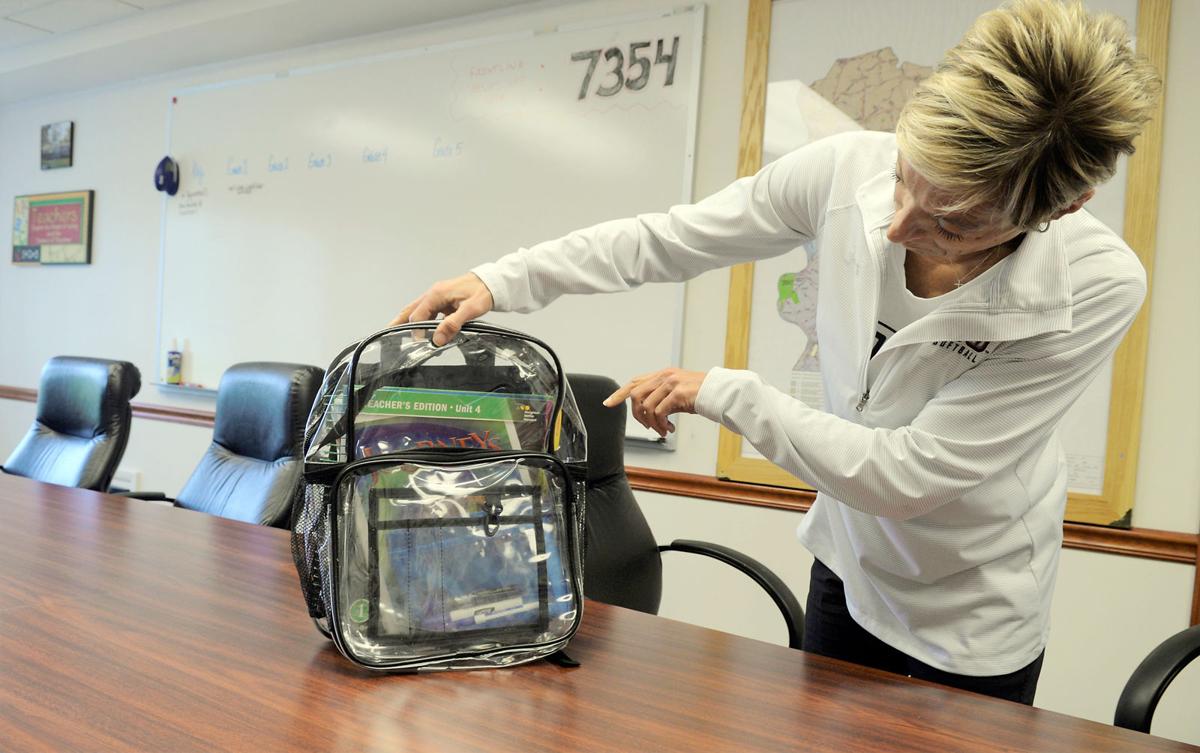 Lara Bezjak, federal programs coordinator and elementary education supervisor for Albert Gallatin Area School District, shows an example of a clear plastic book bag that the district will require of elementary students in 2019-20. 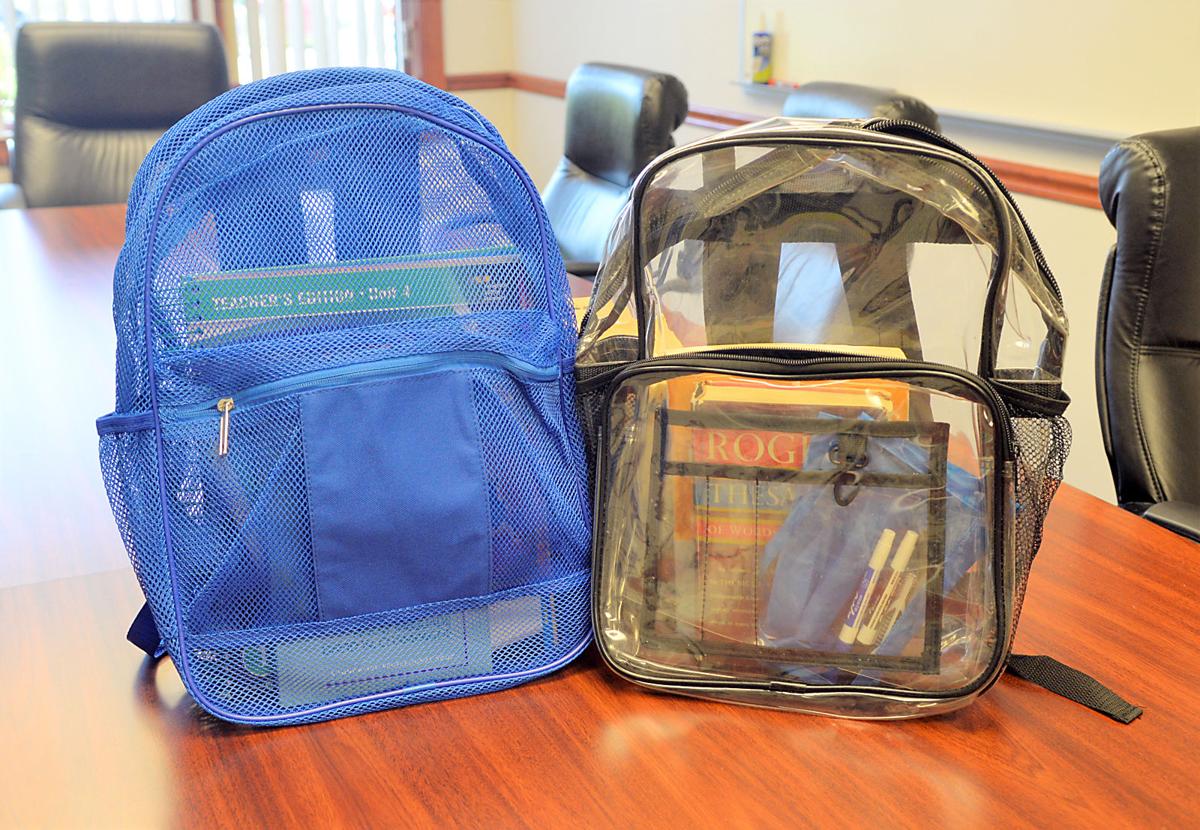 Lara Bezjak, federal programs coordinator and elementary education supervisor for Albert Gallatin Area School District, shows an example of a clear plastic book bag that the district will require of elementary students in 2019-20.

If there is one thing officials in the Albert Gallatin Area School District are trying to make clear, it’s that they’re serious about student safety. If there is another, it’s book bags in elementary schools.

A new policy, approved by the school board this summer and to be implemented by the district for the upcoming school year, requires students attending the district’s five elementary schools to carry transparent bags when they return to class this fall.

The policy calls for parents and students purchasing book bags, backpacks or gym bags to select items made of clear plastic or mesh that will allow district personnel to easily identify the bags’ contents.

District officials state the change is an added layer of security to protect students and staff by keeping weapons out of schools. Over the last 18 months, the district has made various security upgrades, including the installation of metal detectors and bag scanners at its middle and high schools. While metal detectors have also been added to elementary school entrances, the district lacks the funding needed to purchase and install bag scanners at the five primary schools, prompting the less costly policy change.

The new procedure will require book bags to be checked by an adult upon each child’s arrival to school while the child walks through a metal detector.

“I believe this will prevent students from knowingly trying to sneak something into the school because their bags are going to be viewed daily as they enter the building,” said district Superintendent Chris Pegg.

District officials realize not everyone will be pleased with the policy change, but advised that they should to adhere it. Pegg said parents should continue to play a role in making sure their children aren’t bringing inappropriate items to school.

“There is no 100% solution, but we feel strongly that this will help keep items out of the schools that students shouldn’t be bringing in,” said Pegg.

Albert Gallatin will supply transparent book bags to incoming kindergarten students, while the remainder of the district’s elementary population will be required to purchase their own bags, said Lara Bezjak, federal programs coordinator and elementary education supervisor for the district.

A grace period will be provided during the first few weeks of the school year to allow children and parents time to obtain transparent book bags, Pegg said. While there is currently no penalty for coming to school with an inappropriate bag, he said, the district will address the issue with students who do not obey the policy, and the bag will be physically checked when the student arrives at school.

Bezjak said the district has heard feedback from parents about the policy regarding potential privacy issues, as well as it taking away children’s annual ritual of self-expression in choosing their own school bag.

She said parents can contact building principals with any privacy concerns to make arrangements for their children.

She also said the policy change wasn’t meant to stop kids from being kids.

“We understand that they’re children and we certainly don’t want to impede on their ritual of getting a book bag. They sort of feel like that’s been taken away from them, and it’s unfortunate because that’s one thing kids look forward to (when) coming back to school,” said Bezjak. “But that wasn’t the intent of this. We certainly want them to be excited about school.”

While Albert Gallatin is implementing the policy at the elementary level, other area school districts have incorporated similar procedures or practices elsewhere.

“It helps us monitor what comes in and out of the building a little better,” said Superintendent Dr. Bill Henderson.

Henderson said parents have been supportive of the procedural policy, and while students were at first apprehensive to the change, it soon became second nature to them.

“At the end of the day, you have to make a change to ensure what comes into the building belongs in the building. It’s always tough to make a change,” he said, adding that the district has considered the policy at the elementary and high school levels but is not ready to implement it at the former and is not equipped logistically to handle bag checks at the latter, where bags of any kind are not permitted.

Superintendent Dr. Jesse Wallace said bags entering all district buildings are subject to search using bag scanners, many of which are newly installed. Middle school administration is permitting students to transport transparent bags between classes once the bags have been scanned upon the student’s arrival at school.

Other districts have discussed or considered policies regarding transparent book bags during public meetings over the past year and a half.

In June 2018, the Monessen School Board voted down a proposed dress code and backpack policy that called for students to wear school uniforms and carry clear or mesh backpacks. At the time, Superintendent Dr. Leanne Spazak said all students in the district are required to pass through metal detectors and have their bags searched daily and that requiring a clear or mesh bag would make it more difficult to conceal items. She said the board felt the timeframe was too short for the public to prepare for the implementation of such a policy and noted the district would revisit the policy in the future.

In March 2018, the Connellsville Area School Board discussed the possibility of requiring backpacks to be clear. While district Director of Security Michael Parlak advised the board that the idea was impractical, then-Interim Superintendent David McDonald said he believed the board and community could work towards such a change if they agreed it needed to be made.