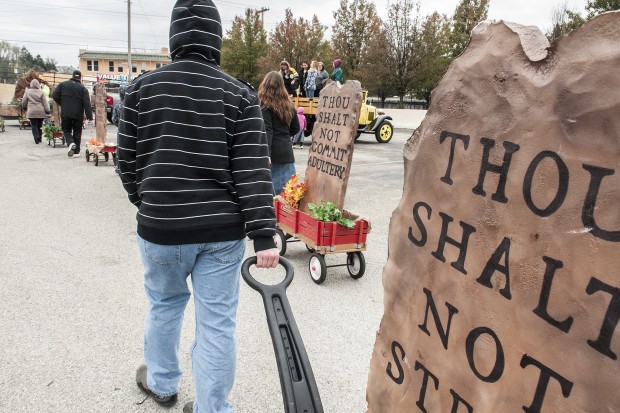 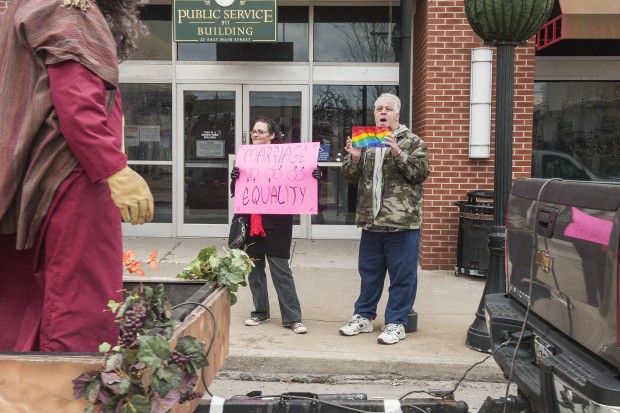 Paula Johnston (left) of Connellsville and Ron Hevener of New Salem voice their support for same-sex unions as a parade in support of traditional marriage makes its way down Main Street in Uniontown Sunday afternoon. The event was held by the Liberty Baptist Church in North Union Township and included a float about the Ten Commandments.

Paula Johnston (left) of Connellsville and Ron Hevener of New Salem voice their support for same-sex unions as a parade in support of traditional marriage makes its way down Main Street in Uniontown Sunday afternoon. The event was held by the Liberty Baptist Church in North Union Township and included a float about the Ten Commandments.

More than a 100 people marched in a parade downtown to celebrate marriage Sunday in Uniontown.

“We are here to encourage people to stand up and support traditional marriage,” said Rev. Ewing Marrietta, pastor of the Liberty Baptist Church in North Union Township.

Joe Joseph, one of the parade’s organizers, said the parade is like any other honoring the public on special occasions.

“We are not here to protest against any certain groups or situations,” Joseph said.

Ewing quoted the Bible as saying that marriage should be between a man and a woman. He said God created the qualities that make a marriage so precious.

“We have couples here who have made it work,” Ewing said in praise of the three couples who have been married at least 50 years.

Lloyd and Anna Hamilton will celebrate their 50th wedding anniversary Dec. 15. Their baptism as culture warriors was inspired by an assault they see is aimed at traditional values. Moments after the parade started, the Hamiltons were inside their car as part of the procession heading down Main Street toward George Marshall Memorial Plaza. Sunday was the first time they had ever marched for a cause like this.

“We want to support traditional marriage,” Lloyd Hamilton said. “Our system of values is under attack.”

Anna Hamilton added, “Where does it stop? If we allow same sex marriage, then why not allow a person to marry an animal?”

Like many people who have been married a long time, Lloyd Hamilton finished his wife’s sentence by saying, “Once you open up Pandora’s box, where does it end?”

Lloyd Hamilton, who was raised in Dunbar, returned to Uniontown from Georgia to celebrate his brother Mark’s wedding to Dee on Saturday. The bride and groom chose to take a little time away from their honeymoon and march in the parade.

“We support the values of traditional marriage between a man and a woman,” said Mark Hamilton, 53, of Little Summit. “That’s what God intended.”

For the Hamilton family, this cause is about morals and Scripture.

Lloyd Hamilton said unlike now, times were different when he married his wife in 1962.

“When Anna and I were married, there was no question about what the definition of marriage was. It was pretty cut and dry,” he said.

Mark and Dee Hamilton will celebrate their official honeymoon in December in Branson, Mo.

“We got married because we love each other,” said Dee Hamilton, 54, after the parade.

Lloyd and Anna Hamilton said they are not against same sex people being happy and experiencing the same joy as other couples. However, they drew a line where personal freedom ends — that point where it affects society as a whole.

Lloyd Hamilton went one step further by saying he is not against men living with men or women living with women because that has been the way these couples have lived throughout history, but he does not think these couples should get married — as defined by Scripture and law.

Neither Lloyd nor Anna Hamilton said they “want society to accept as normal what is not normal.”

Some proponents of same-sex marriage contend that prohibiting this union of souls is comparable to Jim Crow laws of an earlier era that did not allow interracial marriage.

Anna Hamilton countered, “There is nothing in the Bible against interracial marriage, but there is Scripture against homosexuals.”

Her husband added, “This is not a civil rights issue, but a moral issue.”

Lloyd Hamilton went onto say that those who live this “lifestyle” are a minority who are forcing their beliefs onto the majority. Anna Hamilton condemned schools who promote an agenda where children are exposed to books that make homosexuality appear as “normal.” She said she remembers seeing a television commercial selling insurance where two men kissed or hugged each other.

“What does that have to do with selling insurance,” she asked.

Opinions on either side of this issue stir passions that sometimes threaten civil discourse.

Marrietta said prior to the parade, he received two threatening phone calls condemning in no uncertain words about what he and others like him represent.

The Hamiltons said they expected more people to be counter protesting the parade.

Lloyd Hamilton smiled as he said, “I thought we might get egged.”

Instead, the Hamiltons said they saw only one person holding up a poster in support of same sex marriage.

Temperatures were in the low 40s, but an icy wind blasted through downtown to make things much colder.

“Perhaps the weather had something to do with turnout,” Anna Hamilton said.

Lloyd Hamilton remembered a boy whose last name was “Queer” during his days teaching at a school in Latrobe.

“I felt sorry for that boy because he was always picked on,” he said.

Lloyd Hamilton said though the boy was not one of his students, the memory of that boy’s abuse from his peers because of his last name made him remark how important it is for people to treat each other with dignity and respect.

Lloyd Hamilton does not have his head buried in the sand when it comes to homosexuality. Hamilton said he realizes that the country — no matter where a person stands of gay marriage — has to come to grips with these issues because they affect everyone sooner or later.

So if this parade was not "anti" any group, why make the statements in which being gay is compared to bestiality, or say that being gay is not normal? The red herring about being ok with gay people living together and being happy is patronizing. You know what would make me, a gay legally married man living here in PA? the ability to care for my husband, share in the benefits of marriage, such as the right to visit in the hospital, make critical decisions about health care, share in insurance benefits, as well as retirement and social security benefits. THAT would make me happy.

Events such as this simply serve to drive many people, gay and straight, further away from religion. as far as I'm concerned, these loving christians are anything but, and won't get me to ever return to christianity.

I was disgusted when I heard about this parade. A shameful, anti-gay display of hatred under the guise of "religion." How very, very unchristian these people are. Someday, opponents of gay marriage will look just as stupid as opponents of interracial marriage do now. I look forward to that day.