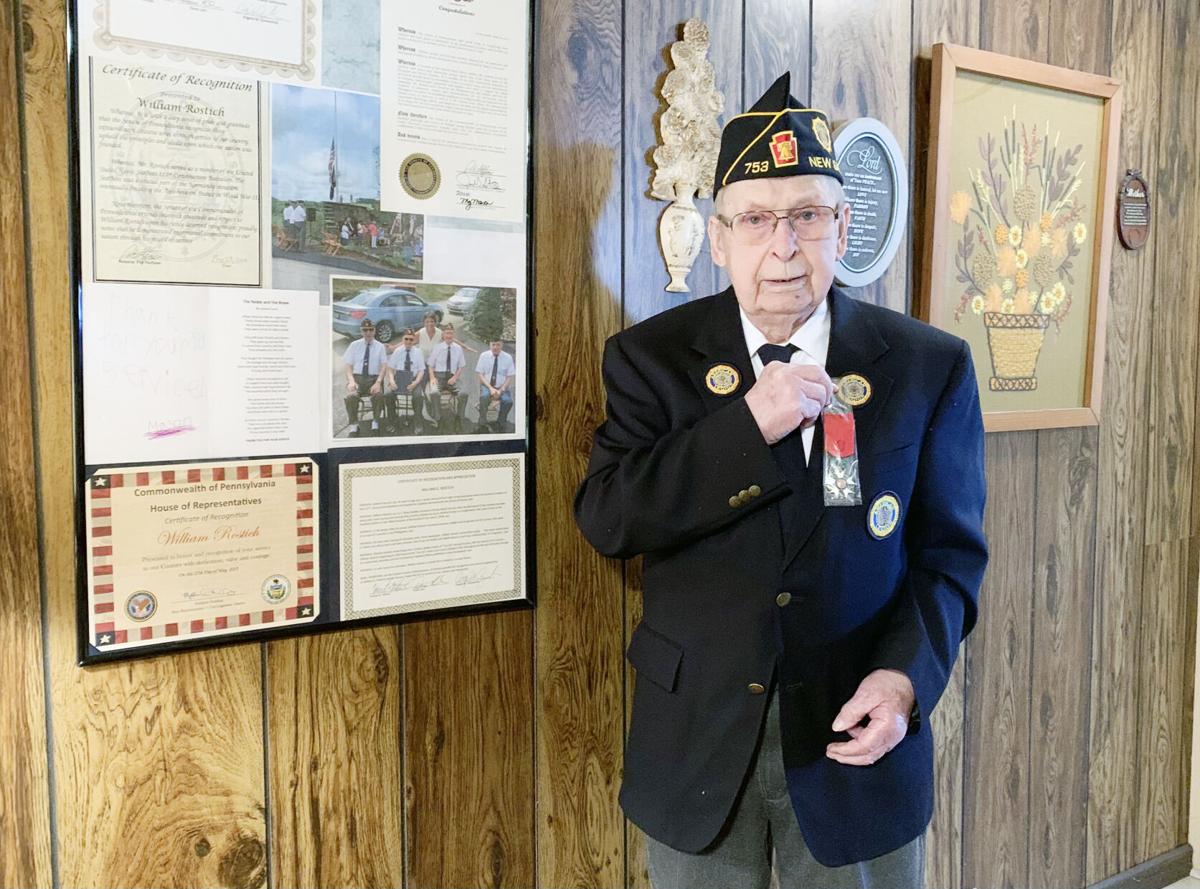 WWII veteran William Rostich, 96, of New Salem, received the French Legion of Honor for his service in the Navy Seabees in the Battle of Normandy in France in 1944. 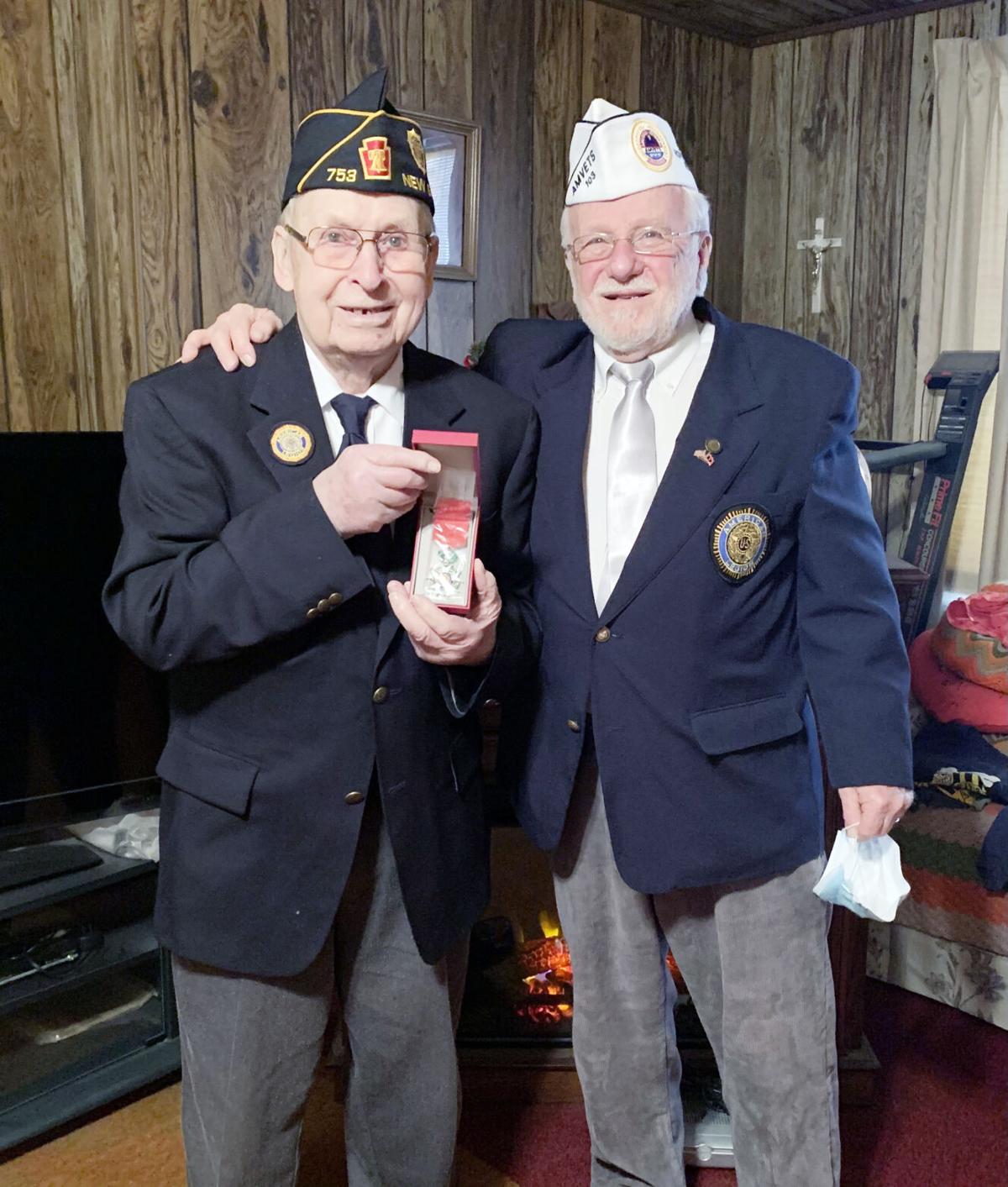 WWII veteran William Rostich, 96, of New Salem (left), poses with his French Legion of Honor medal next to Air Force veteran Frank Steck, of Smock (right), who helped him apply for the award. 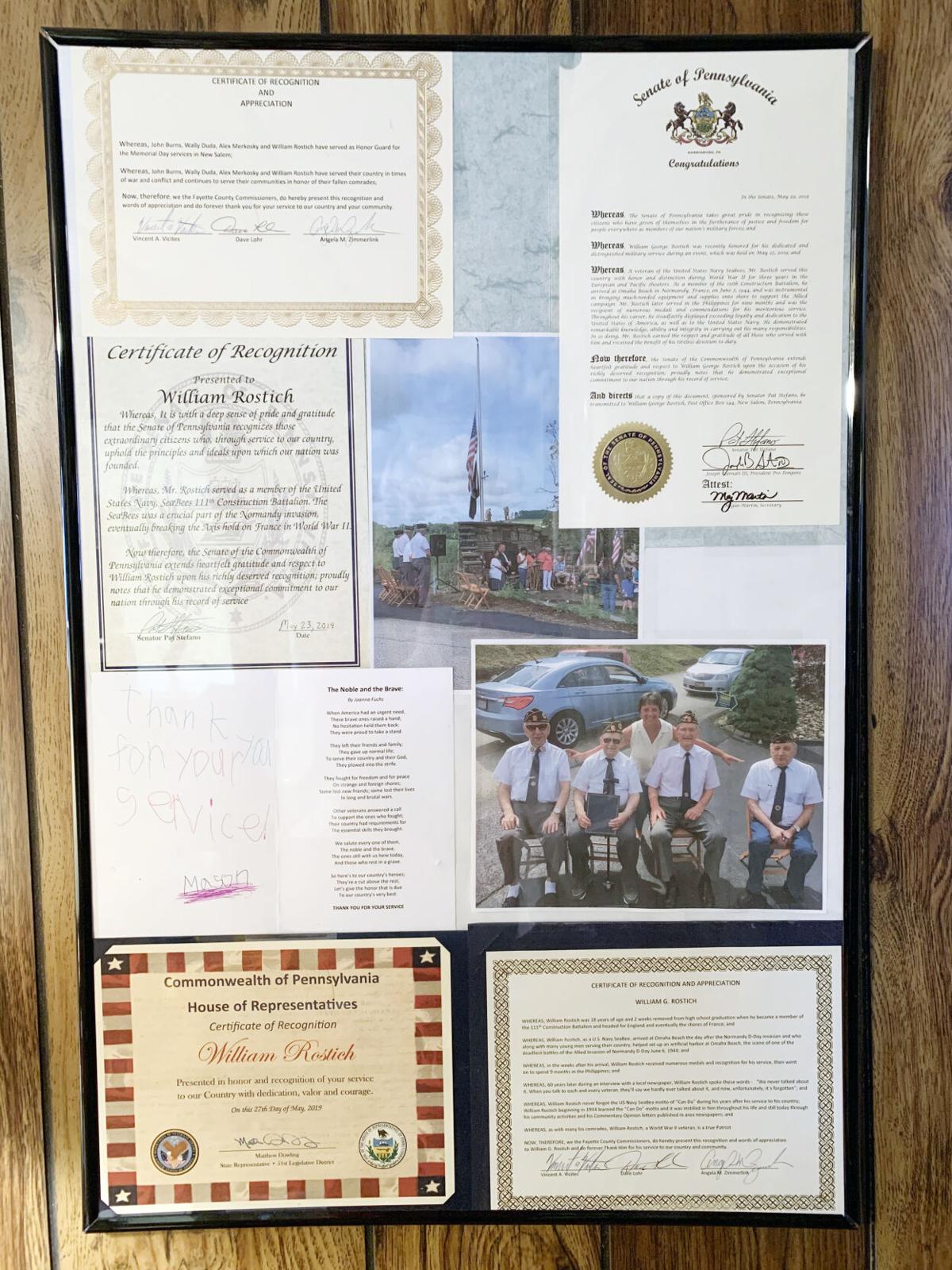 William “Bill” Rostich keeps his awards and certificates framed in his house, including a letter and poem given to him by a young boy who wrote, “Thank you for your service.”

WWII veteran William Rostich, 96, of New Salem, received the French Legion of Honor for his service in the Navy Seabees in the Battle of Normandy in France in 1944.

WWII veteran William Rostich, 96, of New Salem (left), poses with his French Legion of Honor medal next to Air Force veteran Frank Steck, of Smock (right), who helped him apply for the award.

William “Bill” Rostich keeps his awards and certificates framed in his house, including a letter and poem given to him by a young boy who wrote, “Thank you for your service.”

New Salem resident William Rostich was only 18 years old when he enlisted in the Navy, having just graduated from Uniontown Area High School.

He became part of the Seabees 111th U.S. Naval Construction Battalion. One year later, on June 7 of 1944, Rostich, now 96, was operating a pontoon boat with supplies headed to the beaches of Normandy in France during the largest amphibious military operation in history: the Battle of Normandy.

This month, Rostich was sent the highest French decoration for his service during that time: the French Legion of Honor. The medal is divided into degrees, of which Rostich is a Chevalier, or knight.

“It means an awful lot to me. I’m very proud that I was awarded something like this,” Rostich said. “I was very proud to serve my country and do my part. I never regret it.”

Rostich spent more than four months on Omaha Beach and a total of two years and nine months of service in the military before he was honorably discharged in March 1946 as a Carpenter’s Mate Second Class.

Frank Steck, of Smock, is an Airforce veteran and is involved with Veterans Back to Normandy, an organization that helps locate veterans that were involved in the Battle of Normandy and pays for them to visit Normandy. Steck met Rostich through a mutual friend after Steck asked about any WWII veterans he knew.

Steck said he gave Rostich a call, told him about their efforts to locate WWII veterans and let him know he could be eligible for the Legion of Honor. Rostich invited him over, and Steck helped fill out the paperwork for the award and sent it to France in February 2020. There were delays due to the pandemic, but one year later, Rostich now has the award as a reminder and honor.

Rostich recalled hiding in wreckage on the beach because of heavy antiaircraft flak raining down from rockets that the German army was sending to England.

“If they hit you, they were sharp and would cut you pretty bad up,” he said. “We had to go hide in all that wreckage from all the flak.”

He said they would sleep in pup tents, too short for any other purpose, and eat type C rations and type K rations, individual daily combat food rations. On occasion, he said French children would come around and the soldiers would give them candies.

Rostich said experiencing war right out of high school gave him a new perspective and an appreciation for life.

“Being so young, it changed your life all around. It made you grow up faster, made you appreciate things,” he said. “Seeing what war does to people and what destruction there is, you say to yourself, why can’t man live in peace?”

After returning from service, Rostich moved around to find work. While those who had jobs prior to going into service typically received their jobs back when they returned, Rostich, who was just out of high school when he left, didn’t have a job to return to. He became a coal miner in 1947 and worked in the occupation until his retirement in 1986.

Rostich has since made three separate trips back to Normandy in France. On his most recent trip there a few years ago, he visited for almost two weeks.

“What hits me the hardest is the cemetery,” he said. “There are 9,000 of our boys buried there, right there where I was over there. … It gets to you.”