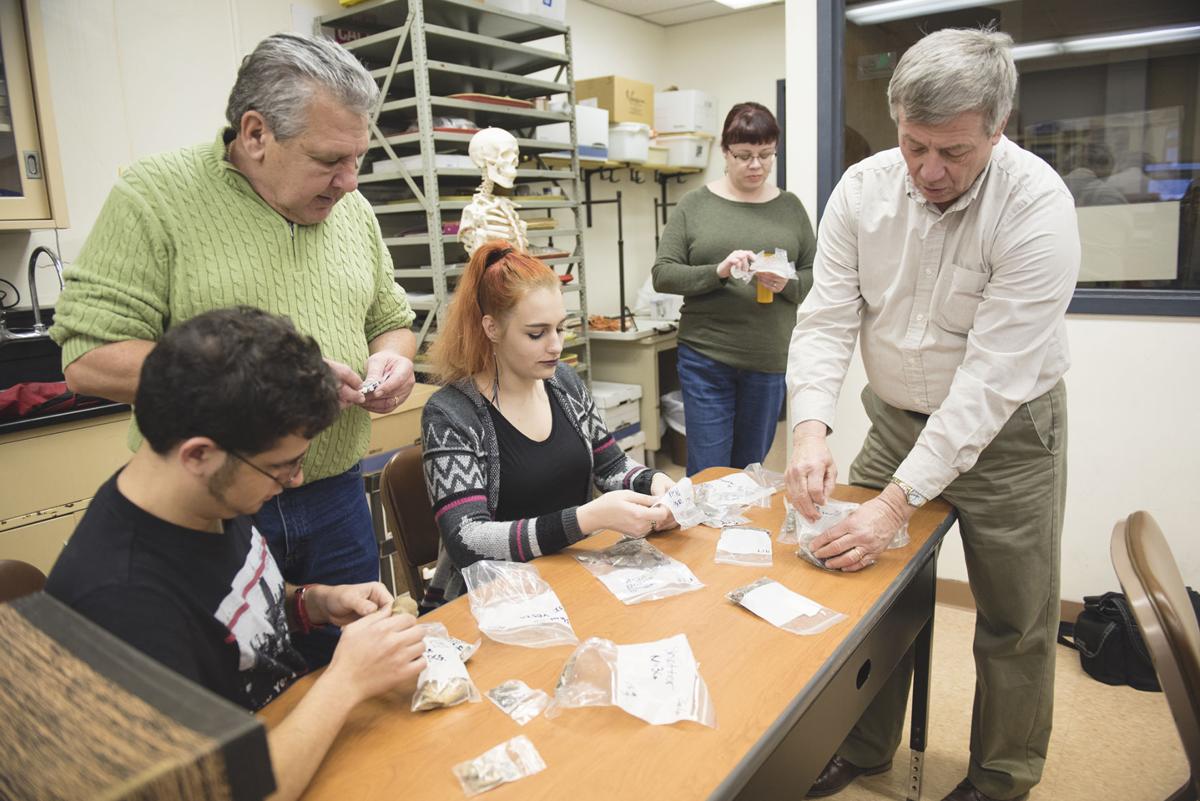 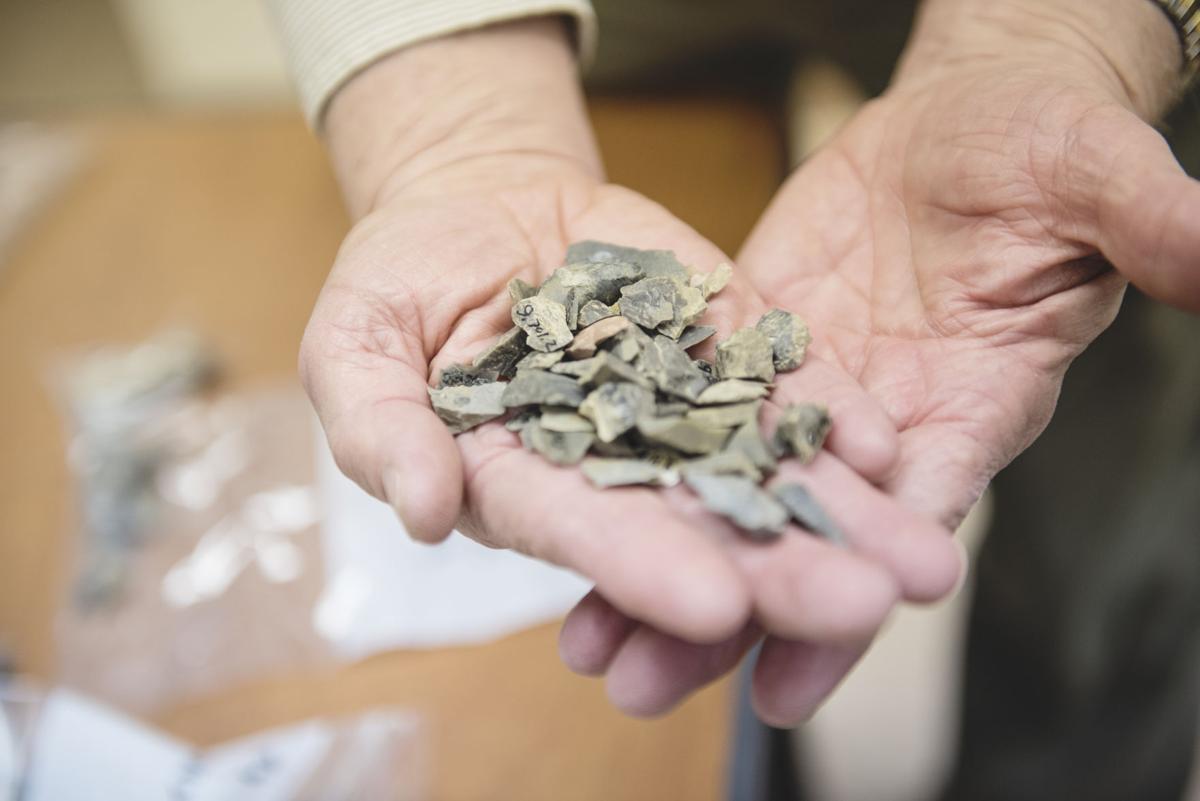 Dr. John Nass, director of the anthropology program at California University of Pennsylvania holds debitage, a term used to describe the material produced during the production of chipped stone tools, from an excavation site in the 70s. 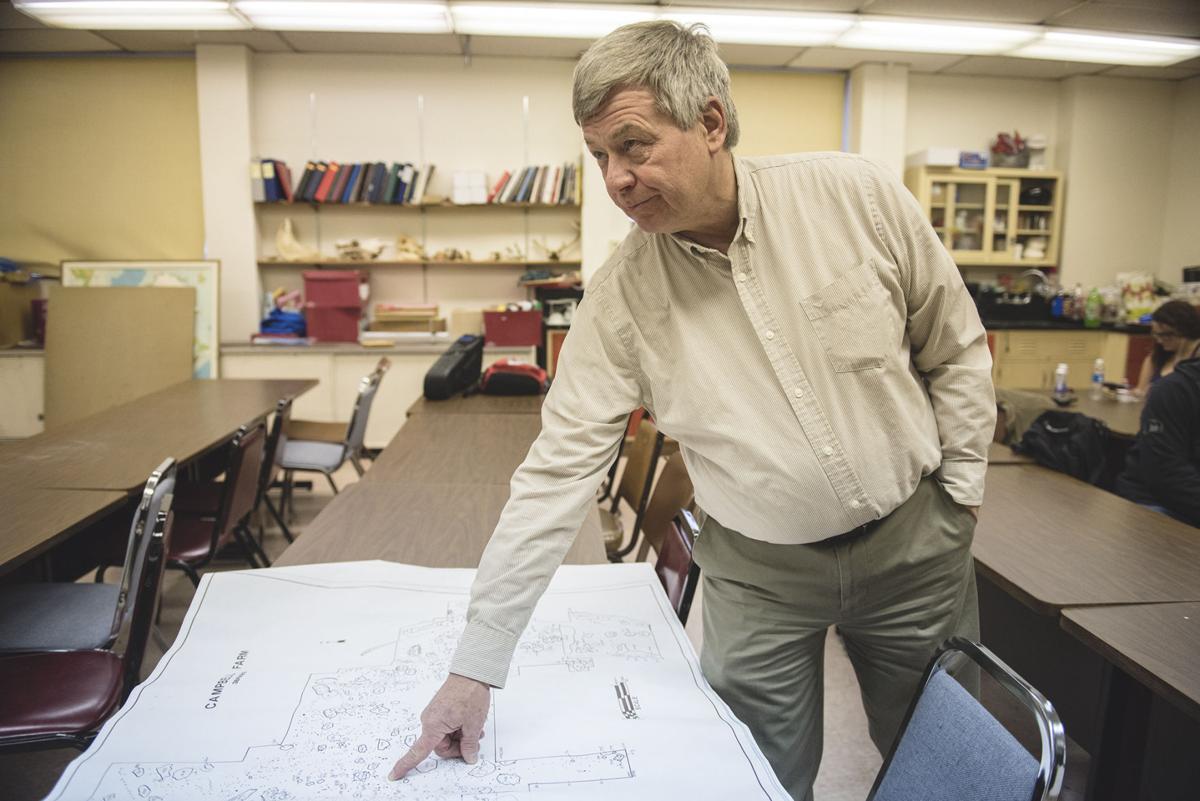 Dr. John Nass, director of the anthropology program at California University of Pennsylvani displays a map of the Campbell Farm dig site in Grindstone.

Dr. John Nass, director of the anthropology program at California University of Pennsylvania holds debitage, a term used to describe the material produced during the production of chipped stone tools, from an excavation site in the 70s.

Dr. John Nass, director of the anthropology program at California University of Pennsylvani displays a map of the Campbell Farm dig site in Grindstone.

In a lab in Frick Hall at California University of Pennsylvania, archaeology students sift through the finds of digs stored for as much as four decades. They are searching for clues to civilizations as much as two millennia old.

Somewhere in these artifacts are clues to a civilization that lived in the area, said Dr. John Nass, director of the anthropology program at California University of Pennsylvania.

He calls them the Monongahela people.

The earliest digs were conducted by Cal U students from 1968 through the early 1970s. One of these sites was located along the banks of the Monongahela River across from Roscoe; another in Perryopolis, Nass said.

One ideal location was discovered in the early 1970s at Campbell’s Farm in Grindstone. When Nass arrived at Cal U in 1990, his students also conducted digs at four other sites combined in Greene and Fayette counties.

The Monongahela people lived in southwestern Pennsylvania, northwestern West Virginia and extreme eastern Ohio as well as the panhandle of Maryland. They migrated as far north as modern day Butler and as far south as Morgantown, Nass said.

And then they disappeared.

“No one knows what became of them,” Nass said. “We do not see interpersonal violence. We have no idea where they went to. Did they migrate? Was it disease? Or pressure from other groups?

Early sites contained just a few families. But the Monongahela people eventually formed large villages of 300 people or more, Nass says, displaying a map of the Campbell Farm site in Grindstone from the 1970s. It took five field seasons with 30 to 40 students to complete the digs there because of the abundance of artifacts.

The items collected from those digs are stored in boxes, preserved for students of archaeology to peruse. Nass pulls out one bag of what is termed as debitage, French for chippage.

Debitage is all the material produced during the production of chipped stone tools. Resembling slate or small stone, it is the waste left by the Monongahela people when making arrowheads or stone tools, for example.

He displays an awl, used for punching holes, which was created out of wild turkey bones.

“The Monongahela culture had rich bone tools, such as awls or fish hooks,” Nass said. “Other things were made out of deer antlers or clams shells. The (Monongahela) river was loaded with clams at one time.”

Dr. Cassandra Kuba said her students determine the sex, age, injuries, illness and diet of the Monongahela people from bones found at these digs. Her students this semester are looking at muscle attachments to bone to determine what were the tasks of the men and women in the villages.

“They were really hard on their bodies,” Kuba said. “We can tell that from arthritis in their bones.”

After finding out what they have, Nass works with students to write a preliminary analysis, including description of where the site was found and what it means.

The research is relevant today as they try to determine the fate of a culture which once lived here.

“We want people to know about these prehistoric people,” Nass said. “There were no written records so this is the only way to learn about them.”