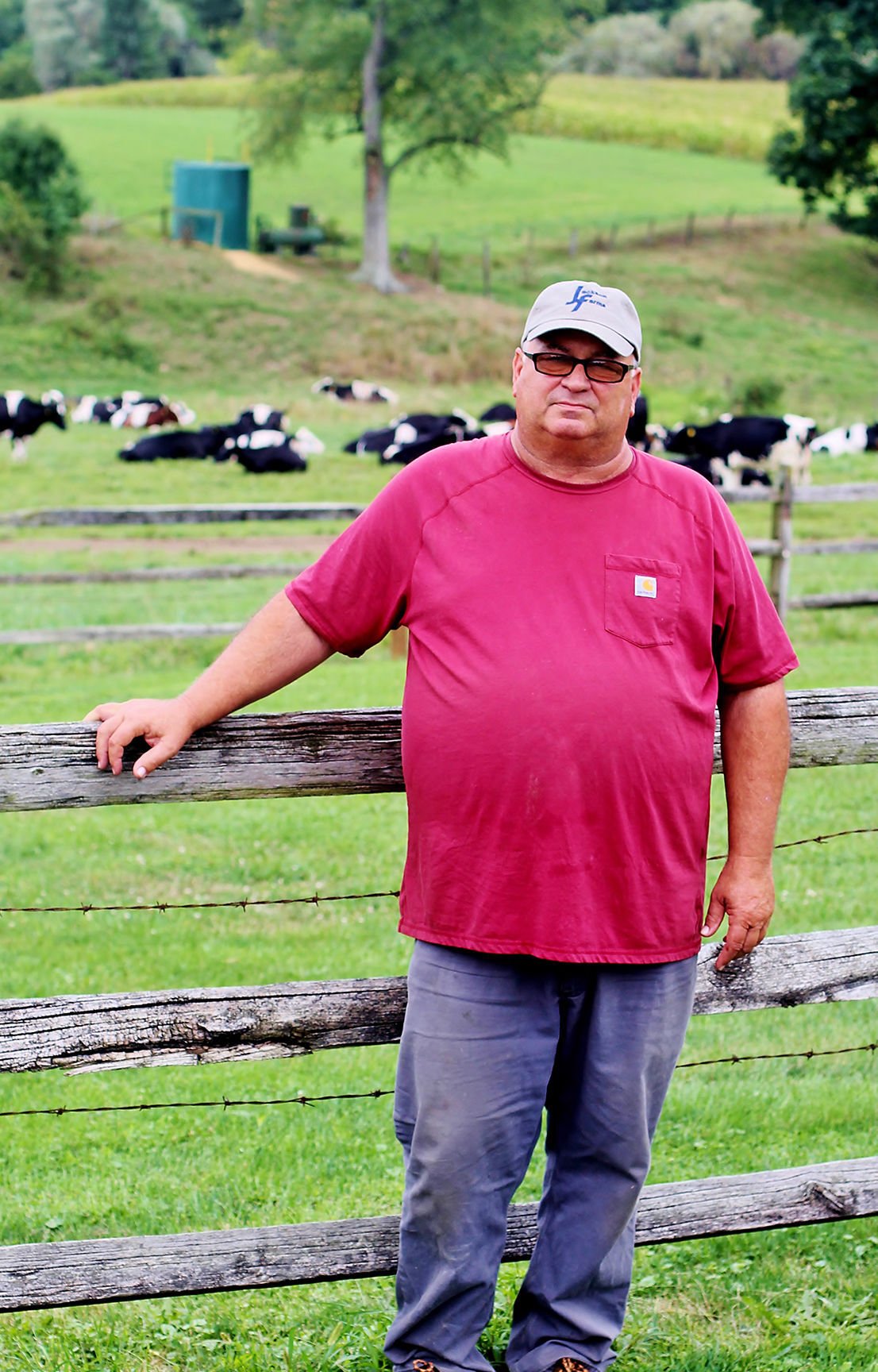 Jackson Farms owner Bill K. Jackson poses on the farm with some of his Holstein cows. 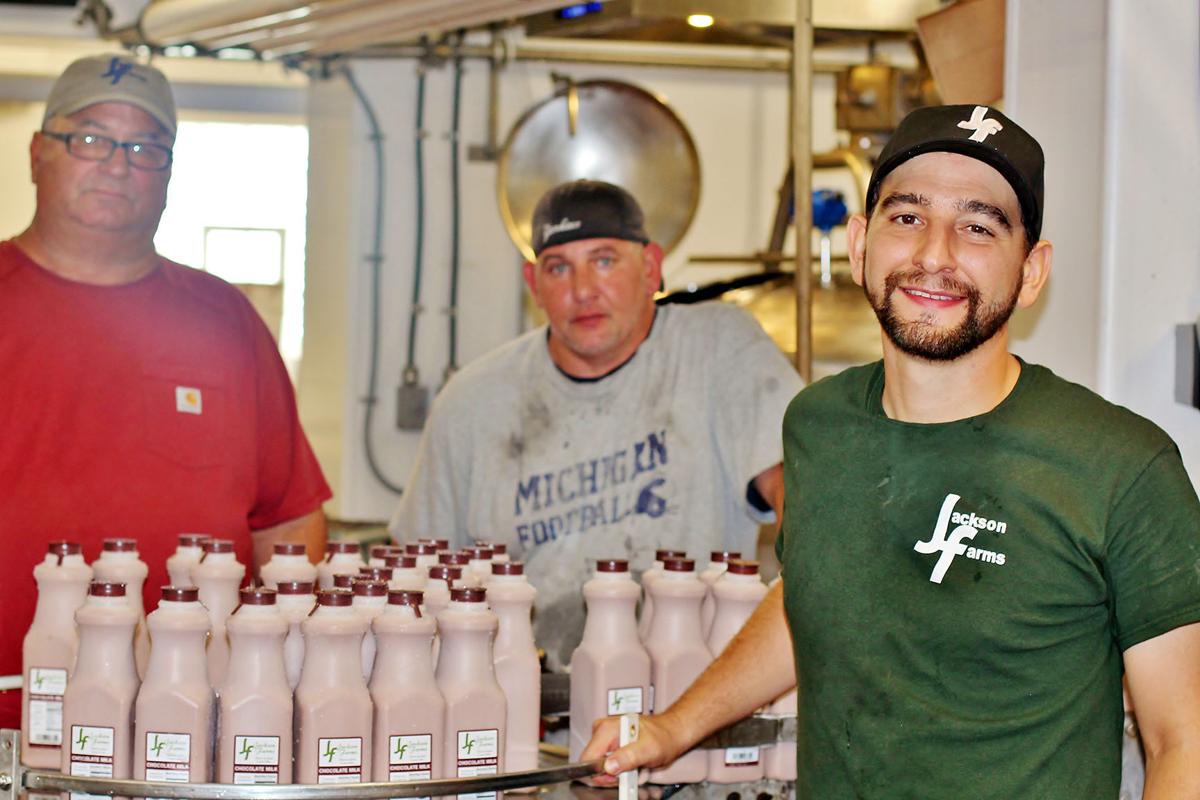 Bill K. Jackson, owner of Jackson Farms, and his nephews, Derek and Josh, are shown after bottling chocolate milk.

Jackson Farms owner Bill K. Jackson poses on the farm with some of his Holstein cows.

Bill K. Jackson, owner of Jackson Farms, and his nephews, Derek and Josh, are shown after bottling chocolate milk.

Now in its fourth generation as family farmers, Jackson Farms was built primarily around dairy production.

Current owner, Bill K. Jackson said his grandfather, Zed, farmed a portion of the property in Redstone Township starting in the 1920s, but lost everything in the Depression. In 1940, he was able to buy back 40 acres adjacent to the original farm. Since then Bill Jackson, his father, Bill S, and brother, Rob, grew the property to its current size of 870 acres. They also rent another 150-acres in Menallen and Luzerne.

In 1958, the farm started to bottle milk, then added ice cream in 1985. Jackson said he got his exposure to the sweet dairy treat while attending Penn State where he majored in agriculture business management. The university’s world-famous ice cream making course attracts students from around the world including Vermont ice cream makers, Ben and Jerry. As a student, Jackson was able to stop in the Creamery which features a wide variety of high-quality ice cream flavors made on campus.

Jackson’s brother-in-law and current business partner, Kerry Harvey, took the ice cream short course at Penn State and helped develop the recipes for the farm’s 40 flavors, not all of which are available at the same time because some are seasonal. Harvey’s son, Josh, also took the course and now helps out in the farm’s ice cream production.

At the moment, 150 Holstein dairy cows pasture in the farm’s lush green fields and get milked twice a day to produce the farm’s whole, skim, 2% and chocolate milk along with buttermilk and ice cream. Initially, from 1958 to 1987, the farm store was located in the current production facility, but later moved to the current site along Route 40 in 1987.

Jackson Farms markets its milk and ice cream at 20 outlets (convenience stores, grocery stores and restaurants) in a 40 mile radius of the farm. Jackson said that the farm store is the largest single outlet, although the other 20 account for more than 50% of the total sales.

In addition to selling milk, ice cream, milk shakes, sundaes and banana splits, the farm store stocks typical convenience store items but also offers ready to cut meats and cheeses, pasta, ham, potato and macaroni salads, hoagies and sandwiches. Monday through Friday, it offers prepared hot specialty foods that change daily like beef tips, stuffed peppers, and rigatoni and meatballs as well as burgers, hot dogs, tacos and nachos. These can be enjoyed either as take out or at a sit down, table and chair area at the back of the store.

The staff can also create a party tray for special events, and a lottery and self-serve gasoline pump area round out the store’s service options.

To make the operation run smoothly, the farm has three distinct crews made up of between 22 and 25 employees. One crew raises the crops and milks the cows. Another, which includes Jackson’s two nephews, runs the bottling facility, while the third makes deliveries or mans the store.

In the near future, Jackson plans to venture into a new area, that of cheese making. The goal is to bolster the dairy farm product options to remedy part of the overall market decline in milk sales. If everything goes as planned, he may have cheese for sale in time for the holidays.

“Over the years, the population in the area has gone down along with the per capita consumption of milk nationwide,” Jackson said. “Nowadays, people also have a lot of beverage choices to pick from, and milk prices are unstable. I think that if we make good quality cheese, there’ll be a market for it.”

As to the future, Jackson said that while two of his daughters teach school and one is a physician’s assistant, he expects they’ll have an interest in the farm sometime down the road. Some of his grandchildren now work on the farm as do Harvey’s two sons. and it appears that the younger generation, or at least some of them, will carry the farm into the future.