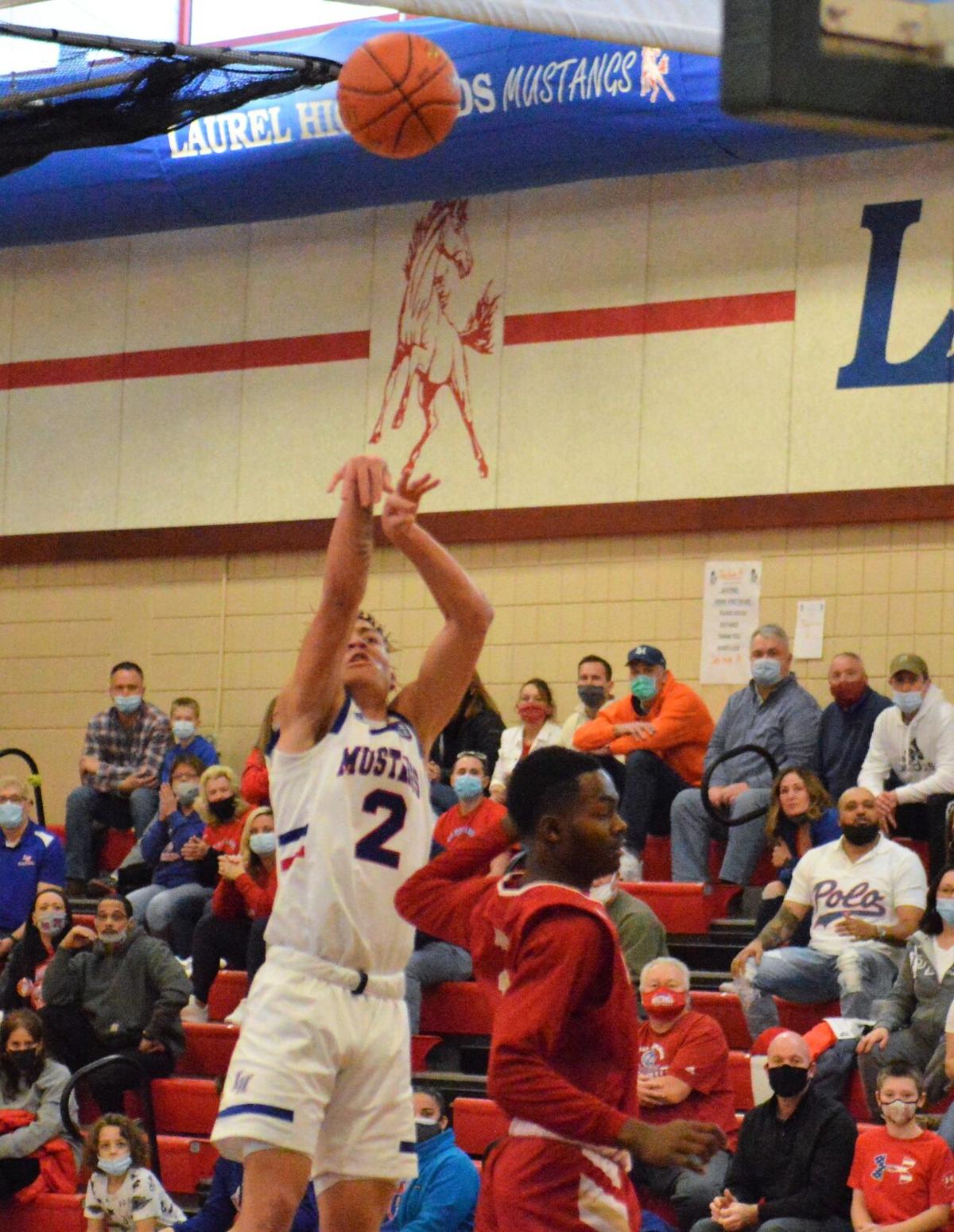 Laurel Highlands’ Rodney Gallagher (2) follows through on a jump shot against Penn Hills during a WPIAL Class 5A quarterfinal playoff game at Harold “Horse” Taylor Memorial Gymnasium on March 6. Gallagher was selected to the Pennsylvania Sports Writers All-State Team, making the Class 5A first team for the second year in a row. 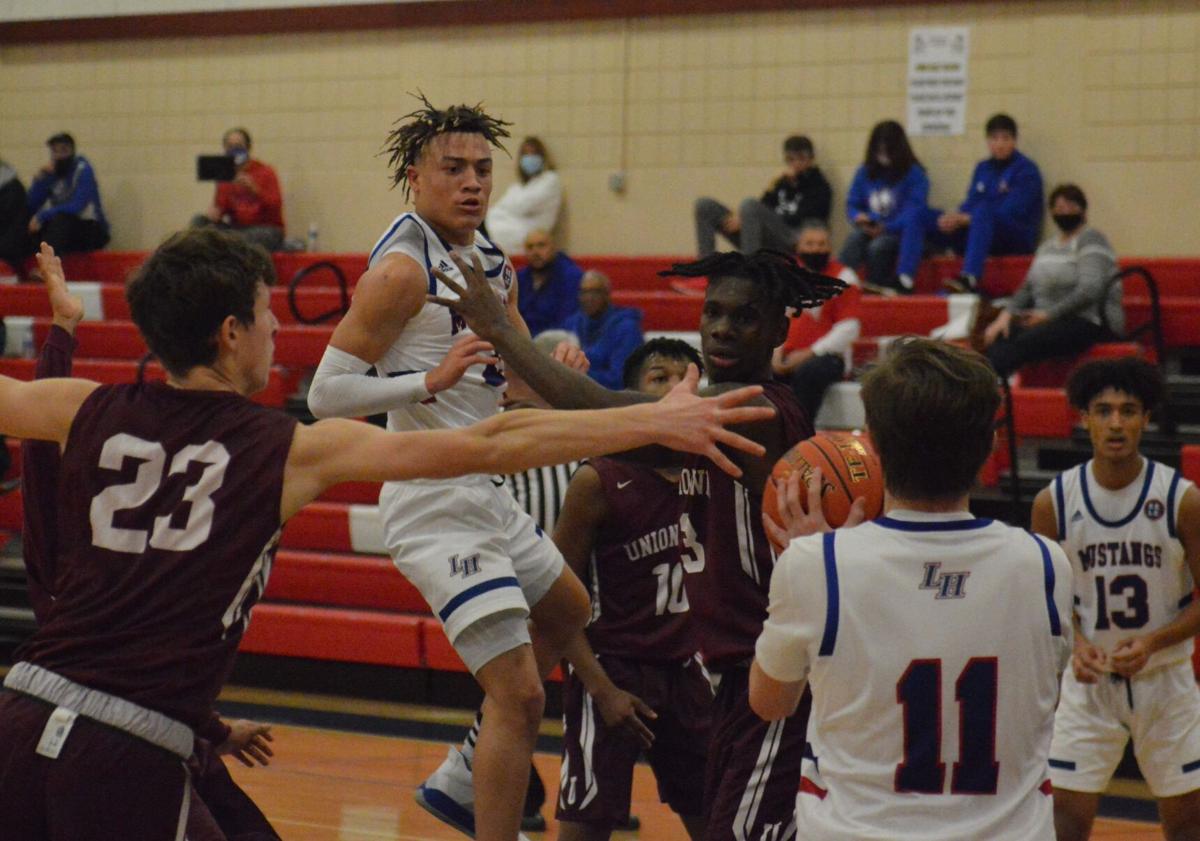 Laurel Highlands’ Rodney Gallagher drives and dishes to teammate Kaydin Phillips (11) during a game against Uniontown at Harold “Horse” Taylor Memorial Gymnasium on Jan. 27. Gallagher recently helped his Team Durant 16U team win the Pittsburgh Jam Fest tournament with a 21-point effort in the championship game. Team Durant is currently ranked No. 1 in the country.

Laurel Highlands’ Rodney Gallagher (2) follows through on a jump shot against Penn Hills during a WPIAL Class 5A quarterfinal playoff game at Harold “Horse” Taylor Memorial Gymnasium on March 6. Gallagher was selected to the Pennsylvania Sports Writers All-State Team, making the Class 5A first team for the second year in a row.

Laurel Highlands’ Rodney Gallagher drives and dishes to teammate Kaydin Phillips (11) during a game against Uniontown at Harold “Horse” Taylor Memorial Gymnasium on Jan. 27. Gallagher recently helped his Team Durant 16U team win the Pittsburgh Jam Fest tournament with a 21-point effort in the championship game. Team Durant is currently ranked No. 1 in the country.

The high school basketball season may be over, but Laurel Highlands sophomore star Rodney Gallagher is as busy as ever.

Gallagher continues to receive NCAA Division I scholarship offers in basketball and football while he plays AAU basketball for Team Durant in the highly-competitive national Hoops Group Select League (HGSL).

And, oh by the way, the 6-foot guard was named first team all-state for the second year in a row.

The Pennsylvania Sports Writers All-State Team was recently released with Gallagher and one other WPIAL player — Chartiers Valley senior guard Brayden Reynolds — both named to the Class 5A first team.

“It’s another great accomplishment and blessing,” Gallagher said. “I worked for it and I’m glad I got recognized again. I’m going to continue to work my hardest to get first team all four years. I appreciate everybody that’s helped me earn this honor.”

Gallagher was pleased to see Reynolds’ name listed on the first team along with him.

“I’m very good friends with Brayden,” Gallagher said. “I’m glad I get to share that accomplishment with him his senior year. I wish the best for him and hope he does very well in his college career and becomes one of the best.”

After leading Laurel Highlands to a section title and to the WPIAL semifinals one year after helping the Mustangs win a WPIAL championship, Gallagher is now playing for Team Durant, and, yes, the 16-and-under team is sponsored by NBA superstar Kevin Durant. It’s also coached by Durant’s dad, Wayne Pratt.

“We’ll be playing all summer,” Gallagher said. “We travel all over the country.”

“He just wants us to continue to get better and is preparing us for college,” Gallagher said. “He works his hardest to put all of us in the best position and he gets on us a lot to make sure we keep improving. He wants us to be the best and it’s shown with how we’ve been playing on the court.”

Team Durant proved that point by recently going 6-0 in winning the Pittsburgh Jam Fest tournament. Gallagher poured in a team-high 21 points in the championship game.

“I’m just glad I had a game like that for my hometown, for people who came up from Uniontown and for Pittsburgh,” Gallagher said. “It meant a lot to me because a lot of people locally got to see it and see what we’re about.”

A lot of other people were watching the games as well. Gallagher has added recent scholarship offers from two SEC teams, Florida in basketball and Mississippi in football, as well as one from an ACC team, North Carolina State, for football.

The Florida offer came right after the Jam Fest event.

“I was actually surprised by it,” Gallagher admitted. “My recruiting director for my Team Durant program, Dwayne Wise, told my dad that two colleges had reached out and it was UCLA and Florida. He’s working right now to get me on the phone with UCLA.

“But, we had a group chat with him, myself and my dad and he said you’ve been offered by Florida and that they liked my performance in the championship game and watched me all weekend.”

An offer from a team with the pedigree of the Bruins, who made a surprising run to the Final Four this year, would be another big splash for Gallagher.

“I watched every team in March Madness, but the run UCLA made was spectacular,” said Gallagher, who complimented Wise on all he does for Team Durant. “He helps us out with our profiles, and while we’re out on the court he’s talking to the coaches. He’s a great help to us all.”

The college offers don’t look to be slowing down.

“I’ve gained interest in basketball from Stanford, Virginia Tech also,” Gallagher said. “Actually, Stanford is recruiting me for football, too.”

Stanford is regarded as one of the top academic schools in the country and Gallagher fully understands the importance of doing well in school.

“Academics are very important,” Gallagher said. “Every time I get on the phone with a college they always ask me how my grades are and want to make sure I’m doing well in school and staying on top of that.

“That’s a big part of getting to and playing college sports, good grades.”

Team Durant has been getting good grades from the pollsters as well. The team is currently the No. 1 ranked 16U team in the country.

“Me and my team have been playing very well and we’re just going to keep working to continue to get better and try to stay as the No. 1 team in the country,” Gallagher said. “We want to stay on top.”

Gallagher has shown that he’s right near the top in the country himself when it comes to high school sophomore athletes.