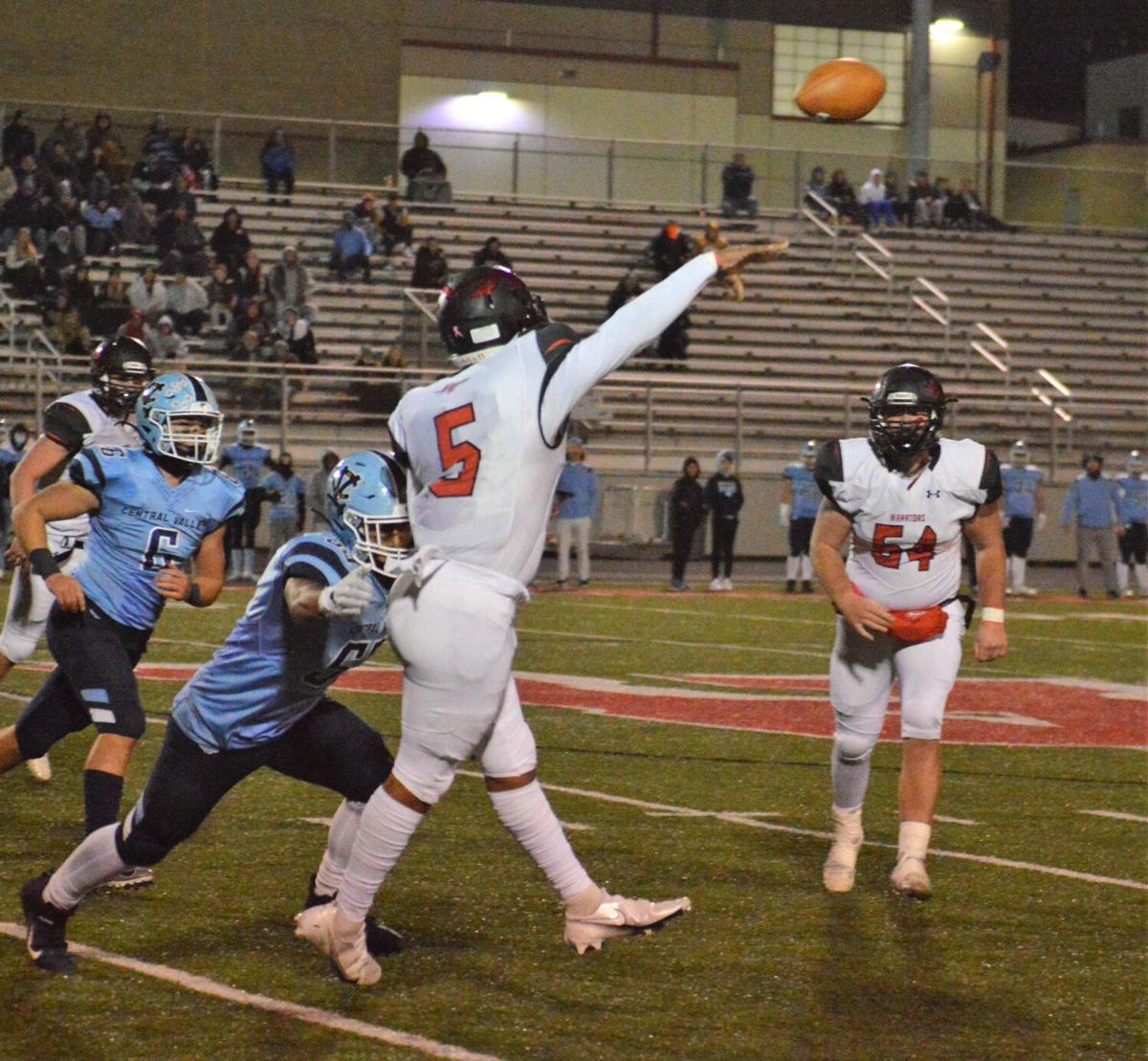 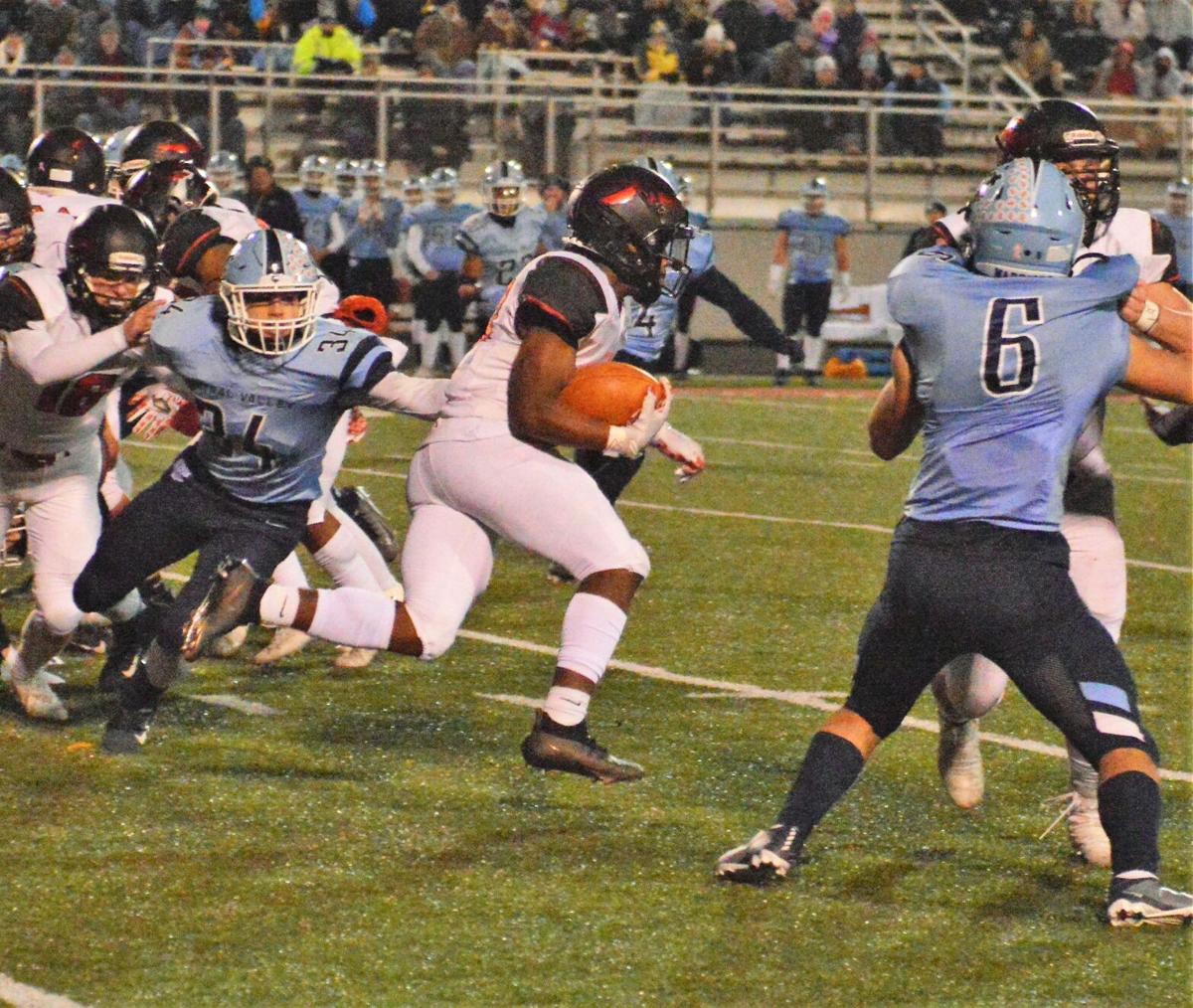 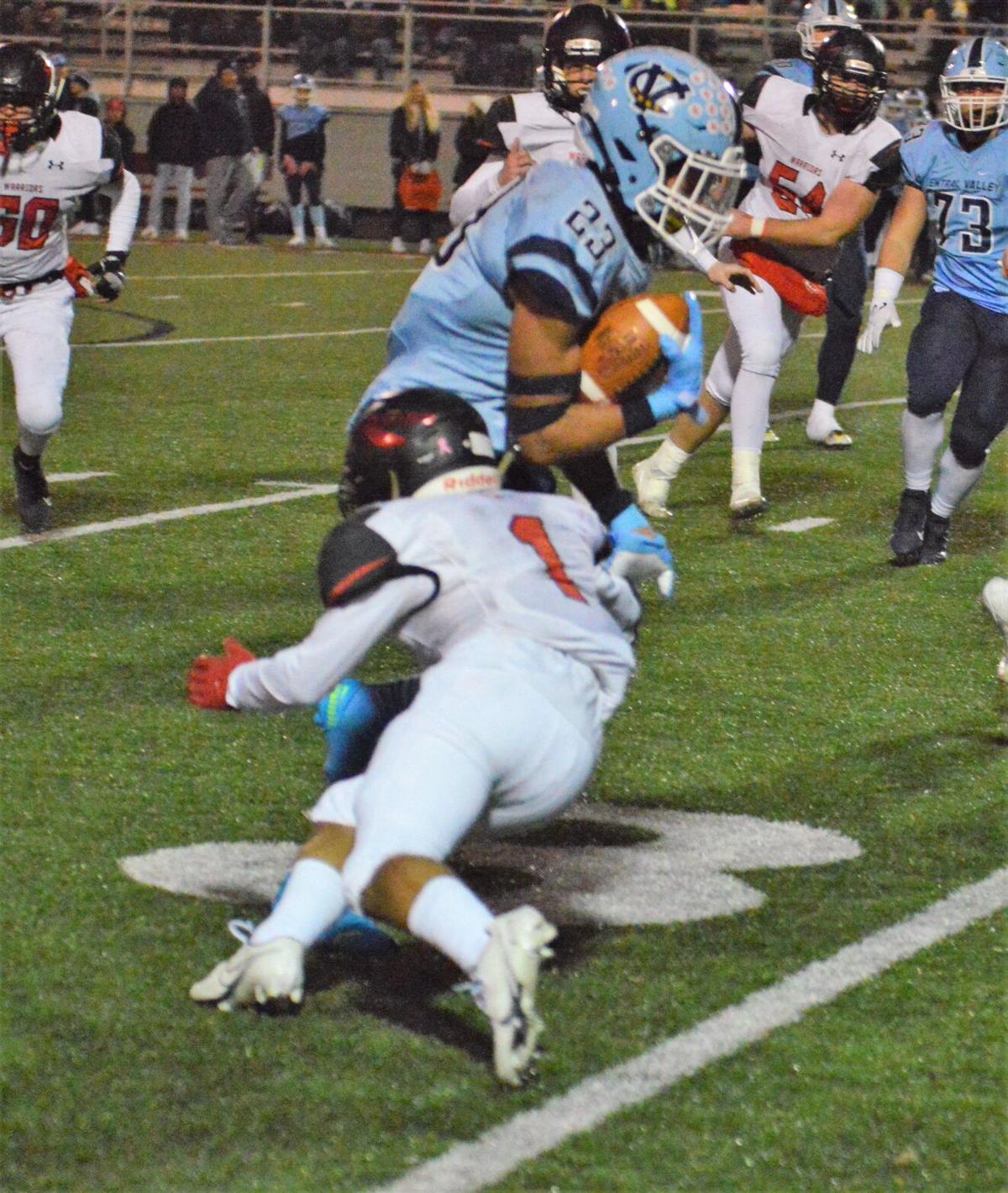 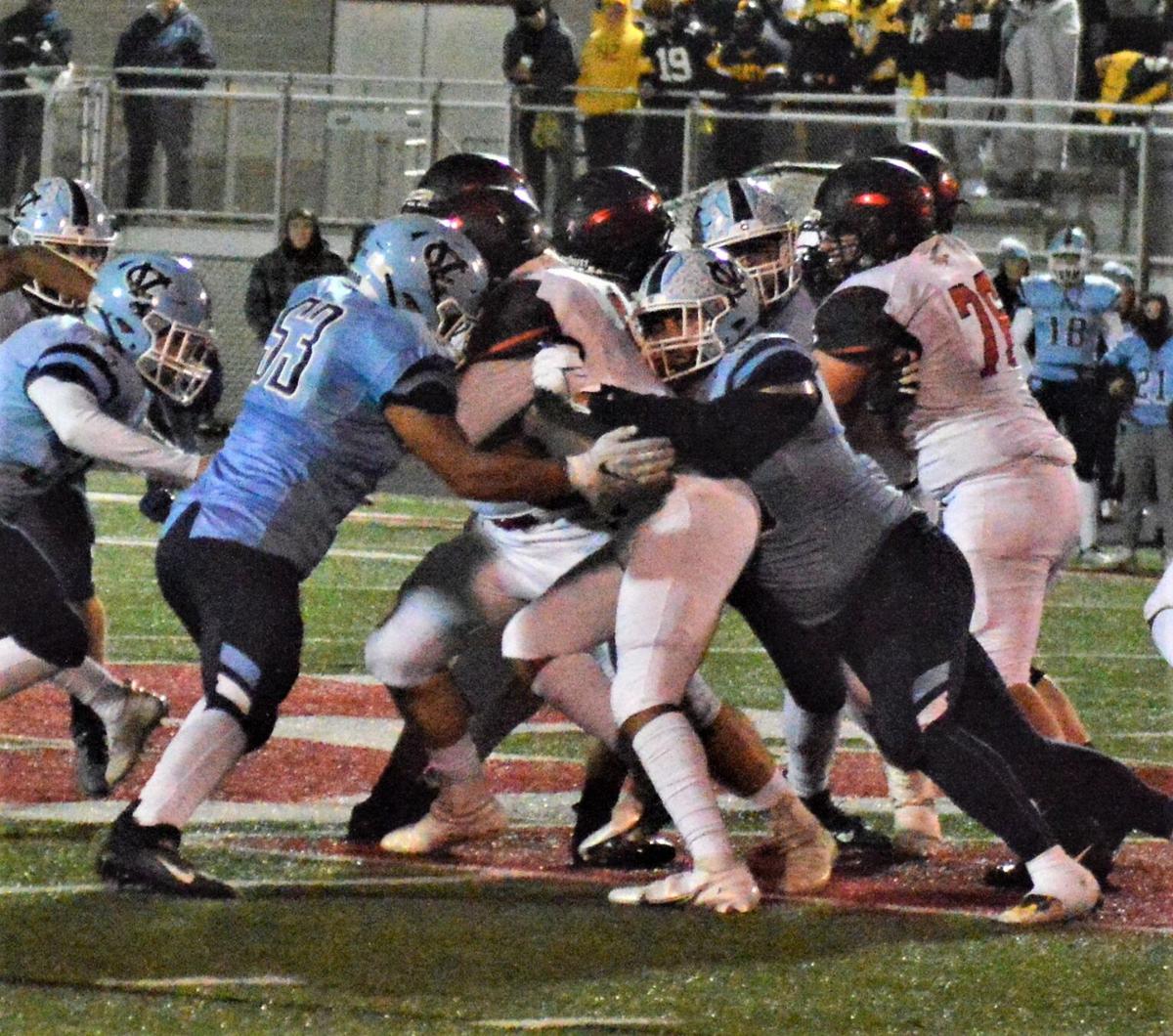 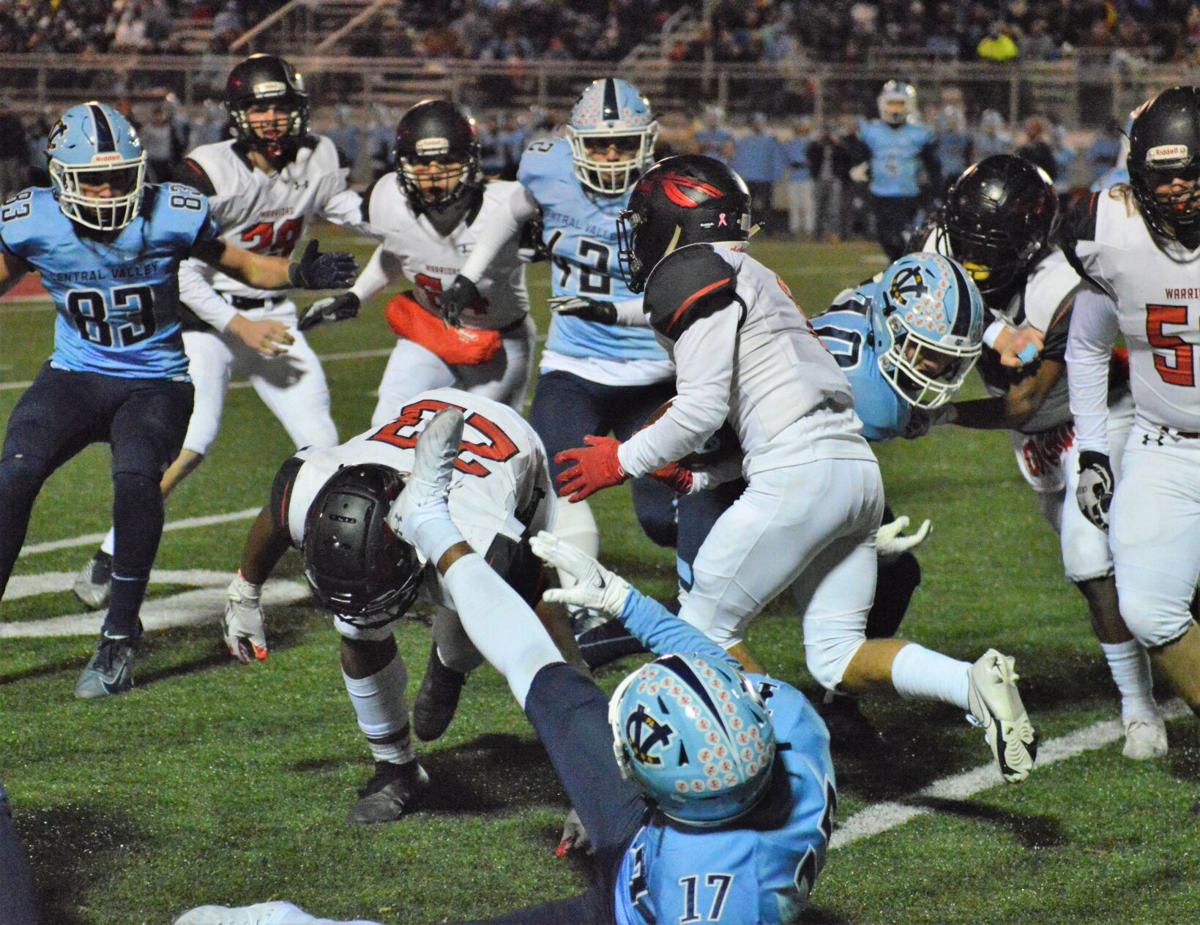 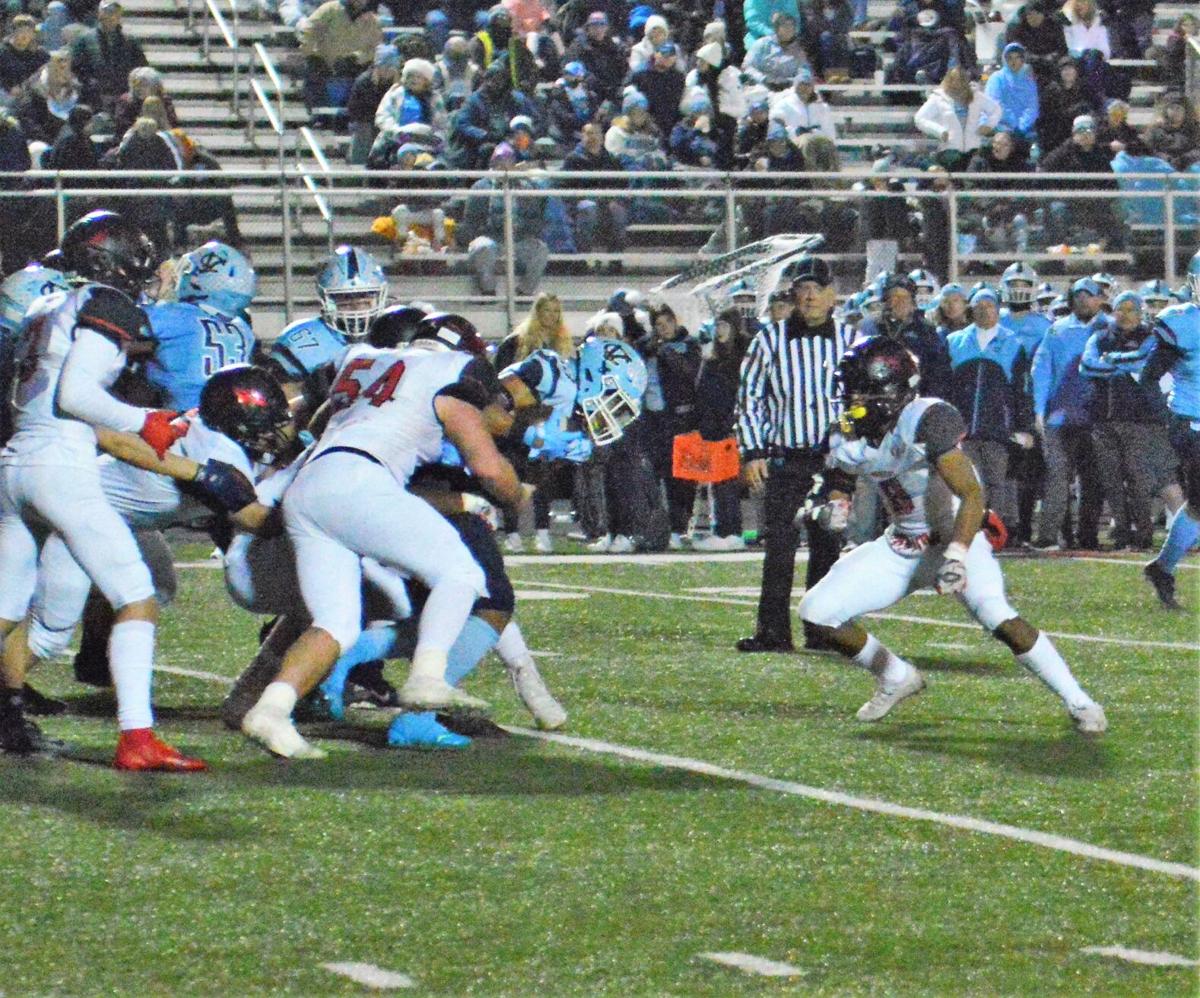 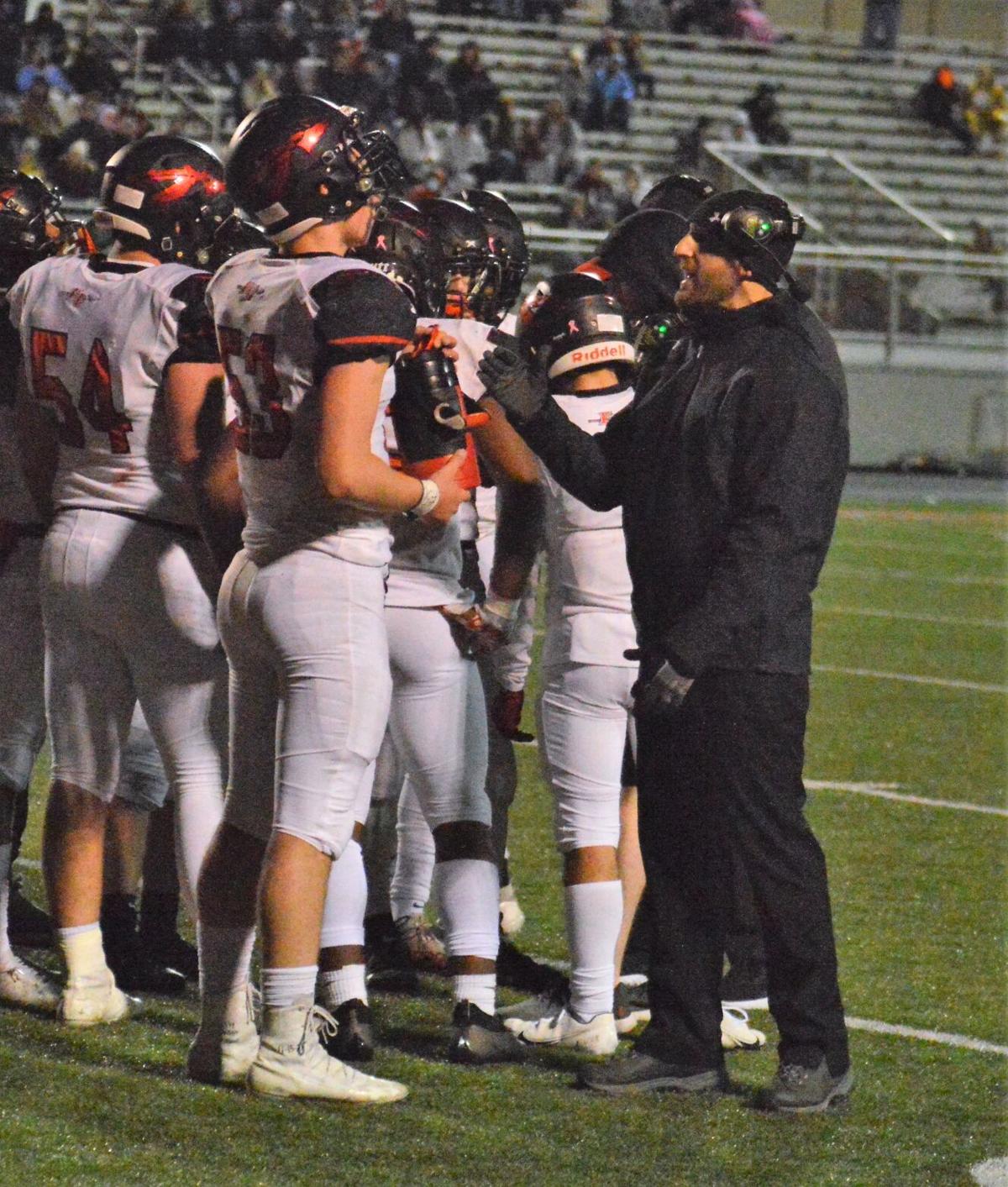 Elizabeth Forward coach Mike Collodi makes a point with his players during a timeout in Friday night’s WPIAL Class 3A semifinal game against Central Valley at West Allegheny. 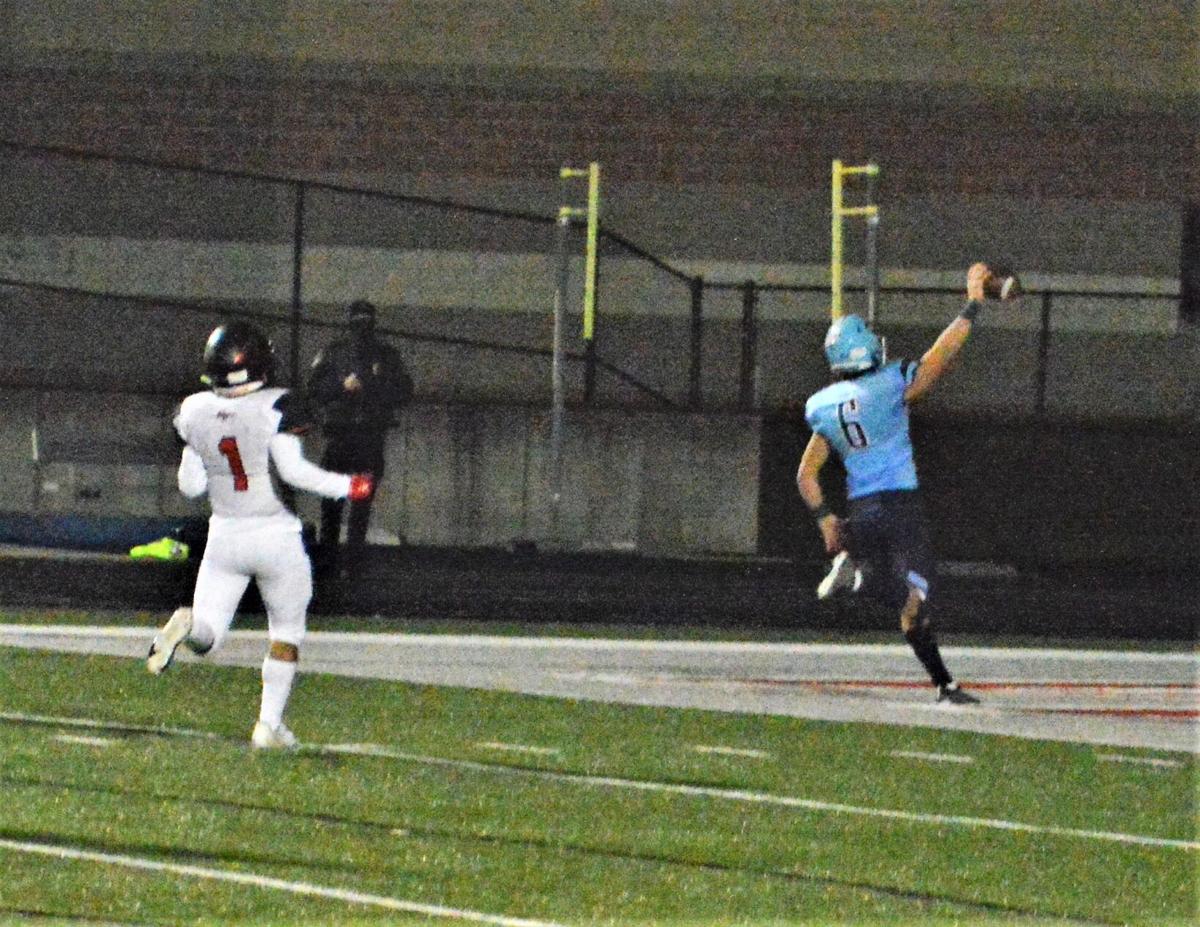 Central Valley’s Matt Merritt (6) raises the football in the end zone after scoring one of this three second-quarter touchdowns against Elizabeth Forward during Friday night’s WPIAL Class 3A semifinal game at West Allegheny. 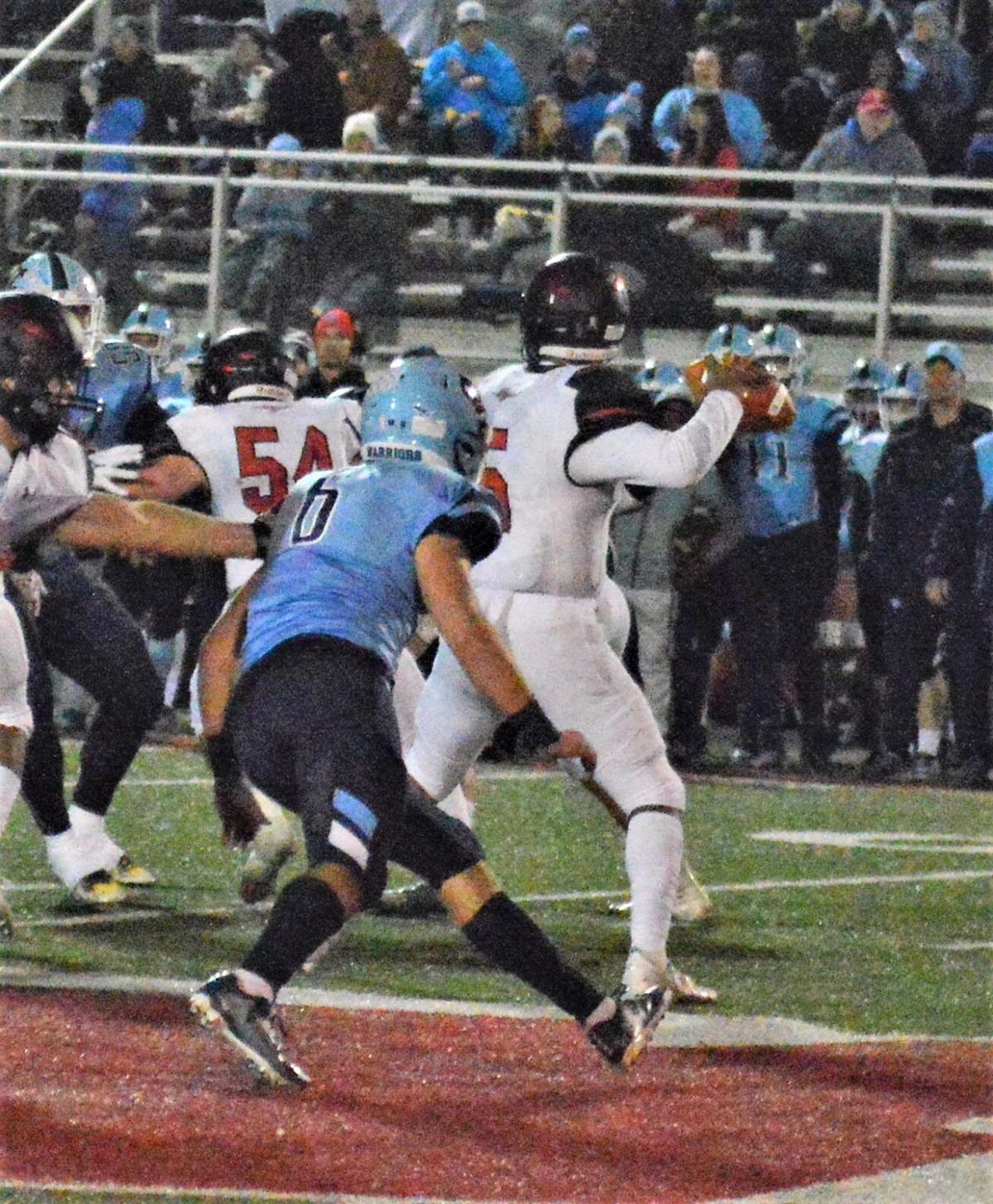 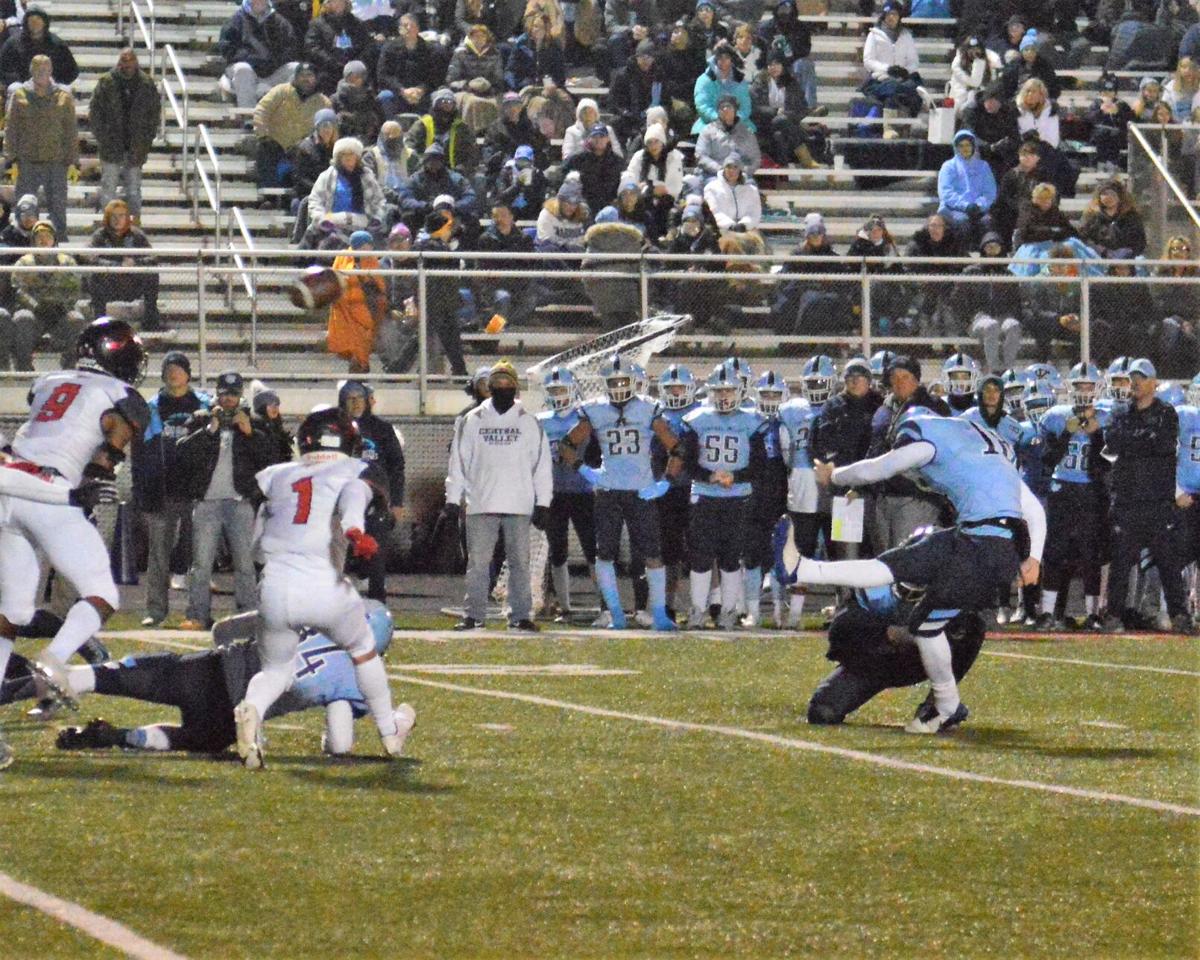 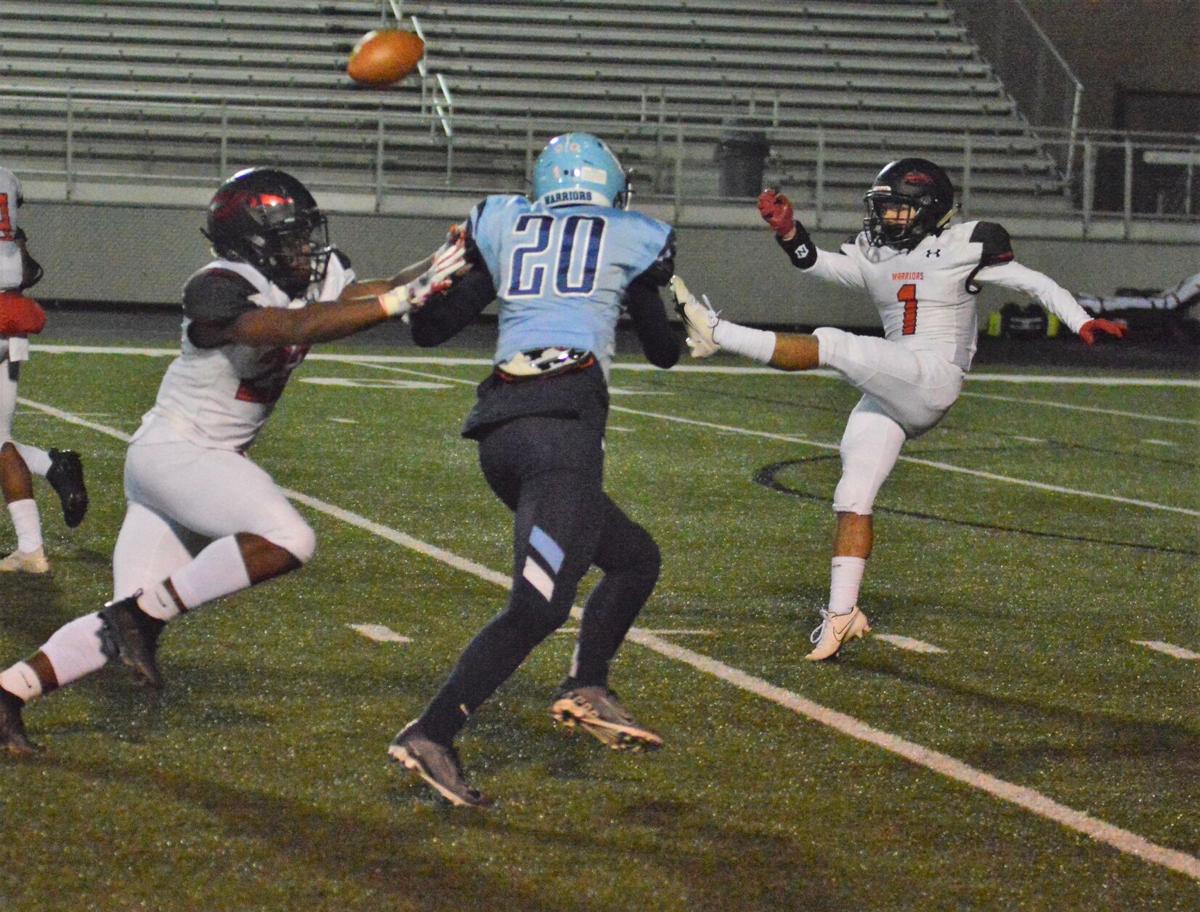 Elizabeth Forward’s Charlie Nigut (1) gets off a punt despite pressure from Central Valley’s Kyle Schad (20) during Friday night’s WPIAL Class 3A semifinal game at West Allegheny.

Elizabeth Forward coach Mike Collodi makes a point with his players during a timeout in Friday night’s WPIAL Class 3A semifinal game against Central Valley at West Allegheny.

Central Valley’s Matt Merritt (6) raises the football in the end zone after scoring one of this three second-quarter touchdowns against Elizabeth Forward during Friday night’s WPIAL Class 3A semifinal game at West Allegheny.

Elizabeth Forward’s Charlie Nigut (1) gets off a punt despite pressure from Central Valley’s Kyle Schad (20) during Friday night’s WPIAL Class 3A semifinal game at West Allegheny.

IMPERIAL — Elizabeth Forward has gradually worked its way up in its seven years under coach Mike Collodi to where it’s considered a top-tier WPIAL football program in Class 3A.

For the second year in a row, the Warriors found out they still have another big step to take to get to the top spot.

Top-seeded Central Valley exploded for 28 points in the second quarter on its way to a convincing 51-0 victory over EF in a WPIAL semifinal game at West Allegheny High School’s Joe P. DeMichela Stadium on Friday night.

Landon Alexander rushed for 198 yards and two touchdowns on 22 carries and Matt Merritt exploded for 159 yards and three scores in just seven attempts as Central Valley advanced to the WPIAL Class 3A final for the third year in a row.

The CV Warriors (12-0), who extended their winning streak to 24, are seeking their third straight district championship and second consecutive PIAA title.

“We just ran into a buzz saw tonight,” Collodi said. “They have the longest winning streak in the state of Pennsylvania in all classes. They won the state title last year and almost won it the year before.

Central Valley dominated on both sides of the ball, amassing 479 total yards while limiting Elizabeth Forward to just 80.

Both coaches agreed the game was won in the trenches with Sean FitzSimmons, Merritt and Jackson Tonya leading the way for Central Valley.

“It’s no secret. You win the line of scrimmage battle, you’ve got a good chance of winning,” CV coach Mark Lyons said. “For all the credit we give our offensive line, I think our defensive line probably doesn’t get enough credit.”

“Their defense is phenomenal,” Collodi said. “They’ve got two or three Division-I guys on their defensive line alone. It’s pretty hard to block FitzSimmons and then Merritt and 53 (Tonya), he’s a heck of a player, too.”

Elizabeth Forward prided itself on its defense also and it gave up ground grudgingly in the opening quarter, allowing only a 31-yard field by Serafino DeSantis.

Central Valley took control in the second quarter when it unleashed Merritt on offense. The senior scored on touchdown runs of 6, 47 and 82 yards as the EF defense focused on stopping Alexander, who is one of the WPIAL’s leading rushers.

“They did some things we never saw on film before, my hat goes off to them,” Collodi said. “They ran Merritt a lot and we were trying to key on Alexander. Must be nice to have another kid like that to run the ball.”

Lyons lauded Merritt, who missed a good chunk of the regular season due to injuries.

“You’re seeing a healthy Matt Merritt on both sides of the ball,” Lyons said. “It’s just another weapon for us and it takes a little bit of the load off of Landon.

“I’m happy for Matt. There’s a kid who I’ve seen put a lot of work into this program, a senior leader, does everything you want to represent our program. This was my way to reward him. I said just hang in there, when the big games come you’re going to be the guy and he bought in.”

Alexander finished the second-quarter barrage with a 2-yard touchdown run 45 seconds before halftime to make it 31-0.

Alexander added a 79-yard touchdown run in the third quarter and Jack Bible returned an interception 59 yards for a TD to make it 44-0. Bret FitzSimmons’ 10-yard touchdown run on the first play of the fourth quarter capped the scoring for CV.

Elizabeth Forward recorded a first down on its first play from scrimmage when Kyle Flournoy ran for 11 yards but it didn’t move the sticks again until the fourth quarter.

Flournoy was EF’s leading rusher with seven carries for 21 yards. Zion White completed just 2 of 10 passes for 50 yards with completions going to Zach Boyd for 38 yards and Charlie Nigut for 12 yards.

“We were 1-2 early in the season and were at a crossroads of where this team could go,” Collodi said. “We reeled off eight in a row.”

Collodi wasn’t down on his team after the game.

“I’m proud of my guys,” he said. “This senior class has only lost nine games in four years. These seniors took us to the next level at EF.”

Collodi has guided his Warriors to six straight winning seasons and has compiled a 47-22 record in his seven years at EF.

“Now we’re competing for WPIAL championships and we’re in the upper echelon of Triple-A year in and year out,” Collodi said. “It’s the kids. They’ve bought in and are doing a heck of a job. The credit goes to them.”