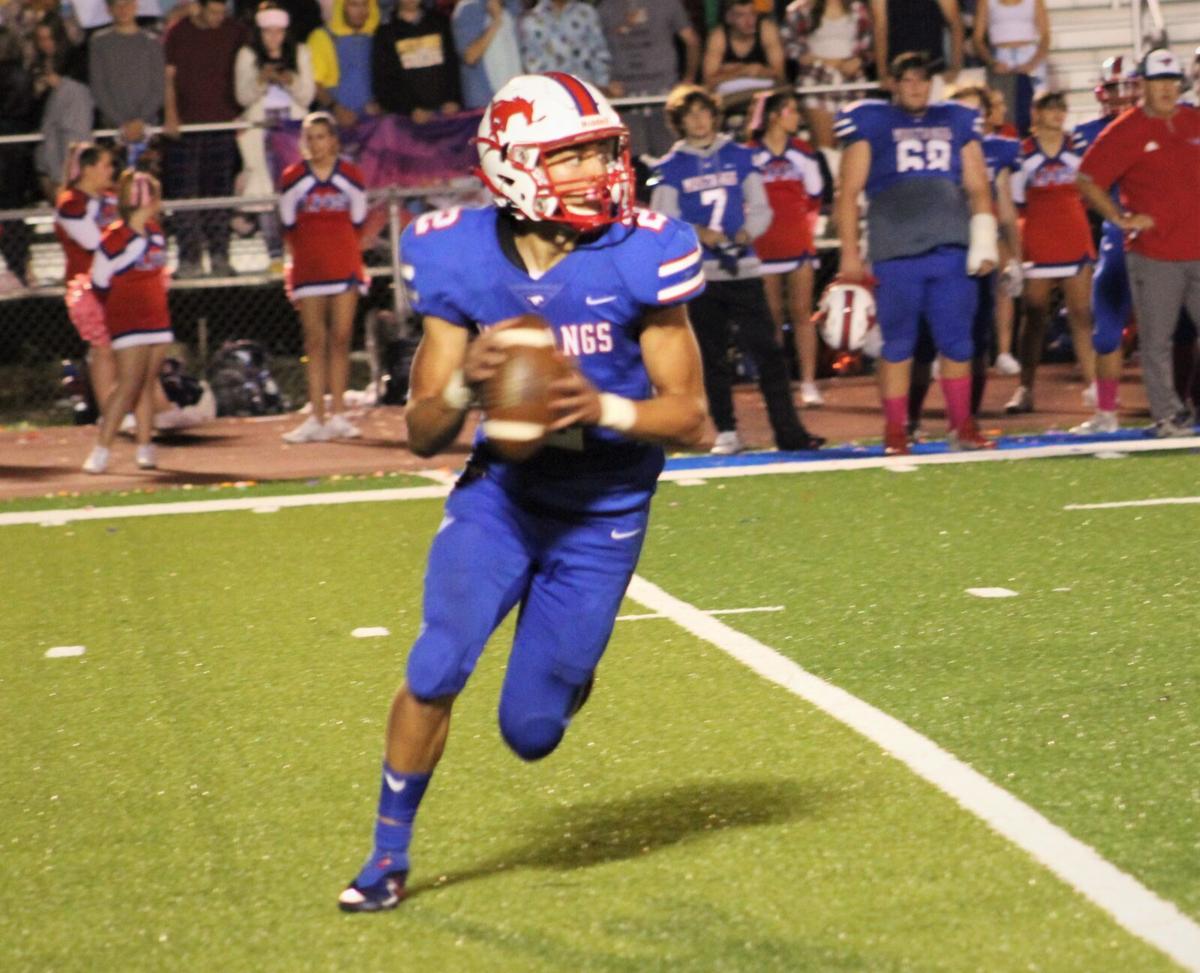 Laurel Highlands quarterback Rodney Gallagher rolls out to his right as he looks for an open receiver during the second quarter of Friday’s Big Eight Conference game against Thomas Jefferson at Laurel Highlands. 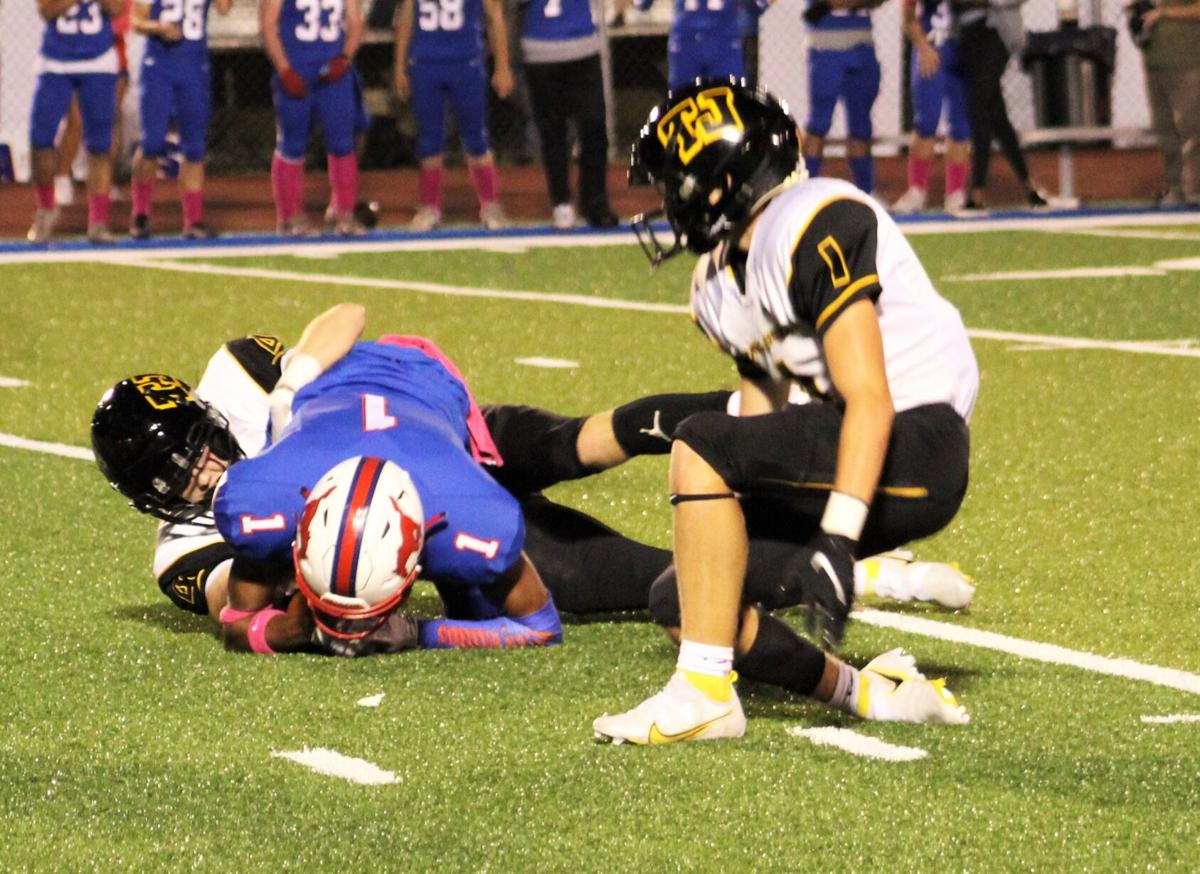 Laurel Highlands’ Jayden Pratt (1) holds on for a reception in the first quarter of Friday’s Big Eight Conference game against Thomas Jefferson at Laurel Highlands.

Laurel Highlands quarterback Rodney Gallagher rolls out to his right as he looks for an open receiver during the second quarter of Friday’s Big Eight Conference game against Thomas Jefferson at Laurel Highlands.

Laurel Highlands’ Jayden Pratt (1) holds on for a reception in the first quarter of Friday’s Big Eight Conference game against Thomas Jefferson at Laurel Highlands.

Thomas Jefferson didn’t have that one blowout quarter Friday night, but steadily put together four solid quarters for a 42-3 road victory at Laurel Highlands in Big Eight Conference action.

“We win one of those games and we should be good,” said Laurel Highlands coach Rich Kolesar of his squad’s playoff chances.

Laurel Highlands closes out the regular season with a non-conference game against rival Uniontown on Oct. 29.

The Jaguars rebounded after a 28-21 loss to Belle Vernon two weeks ago and an off week last week to improve to 2-1 in the conference and 4-1 overall. The Mustangs fell to the Leopards last week, 56-14.

Thomas Jefferson won the opening toss and needed all of one play and 17 seconds to take the lead.

Quarterback Joe Lekse dropped back on the opening play from scrimmage and hit a streaking Sean Sullivan along the right sideline for a catch-and-run 78-yard touchdown pass.

The Mustangs responded on the next drive with a scrambling Rodney Gallagher connecting on two big pass plays to push the ball into Thomas Jefferson territory.

The drive stalled, however, and Harry Radcliffe nailed a 42-yard field goal at 8:29 of the opening quarter.

The Jaguars steadily picked up first downs on the next drive to set up Lekse’s one-yard plunge into the end zone at 4:18.

The score remained 14-3 for most of the second quarter until the Jaguars scored two late touchdowns.

Lekse waltzed into the end zone behind blockers for a 3-yard touchdown run with 3:16 left in the first half. Lekse capped a late drive with an easy 7-yard touchdown pass to Jordan Meyer with only 5.8 seconds remaining.

The Mustangs were in position to cut into the deficit when they received the second half kickoff.

The drive stalled, though, and the Mustangs were faced with a 4-and-6 at the Thomas Jefferson 37-yard line. Gallagher took matters in his own hands, scrambling from deep in the pocket through Jaguar defenders, leaving a couple in his wake with some nifty footwork for a 24-yard gain to the 13-yard line.

The drive abruptly ended when Gallagher tried to force a pass into a crowd and Angelo Volomino intercepted at his own 5-yard line.

“It was the same thing last week. We had a lot of long drives, but we didn’t score,” said Kolesar. “We didn’t finish drives and it came back to bite us. That is something we need to change.”

The Jaguars turned the mistake into the third quarter’s only touchdown.

Lekse turned in two big plays that moved the visitors deep into LH territory. Lekse sliced through the Mustangs defense for a 40-yard gain on a third-and-9 play at the TJ 6. Lekse then found Sullivan open behind the Laurel Highlands secondary for a 57-yard completion.

The Thomas Jefferson defense didn’t allow Gallagher any time to set up in the second half, and managed to get to the quarterback for substantial losses. Gallagher completed 10 passes for 149 yards.

He completed three passes each to DeShields, Jayden Pratt and Matt Lucas. DeShields finished with 61 yards receiving, Lucas totaled 50 and Pratt had 38.

Kolesar was disappointed with the loss, but not dismayed with the effort put forth by the Mustangs.

“I love this team. I love the fight,” praised Kolesar. “We know the negatives. That is something we have to fix.”