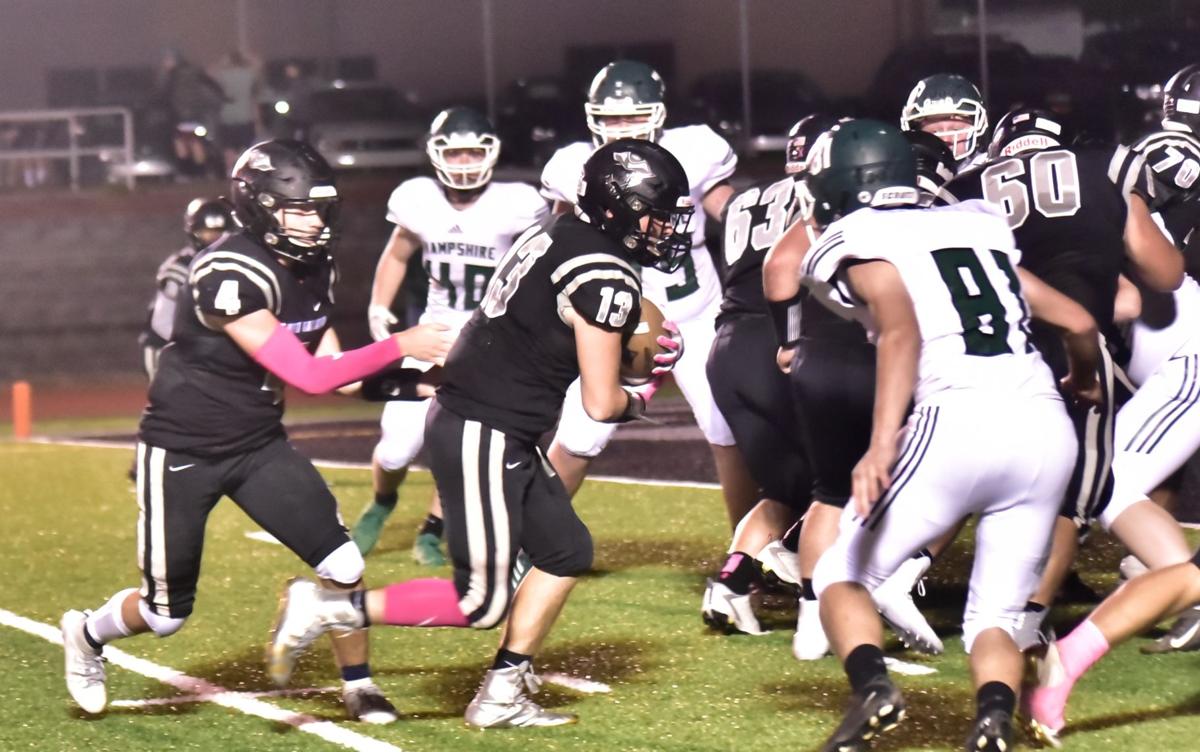 Albert Gallatin's Kolby Varano takes a handoff from Tristan Robinson for a touchdown during Friday's game against Hampshire at Colonials Stadium. The Colonials blanked the Trojans, 49-0. 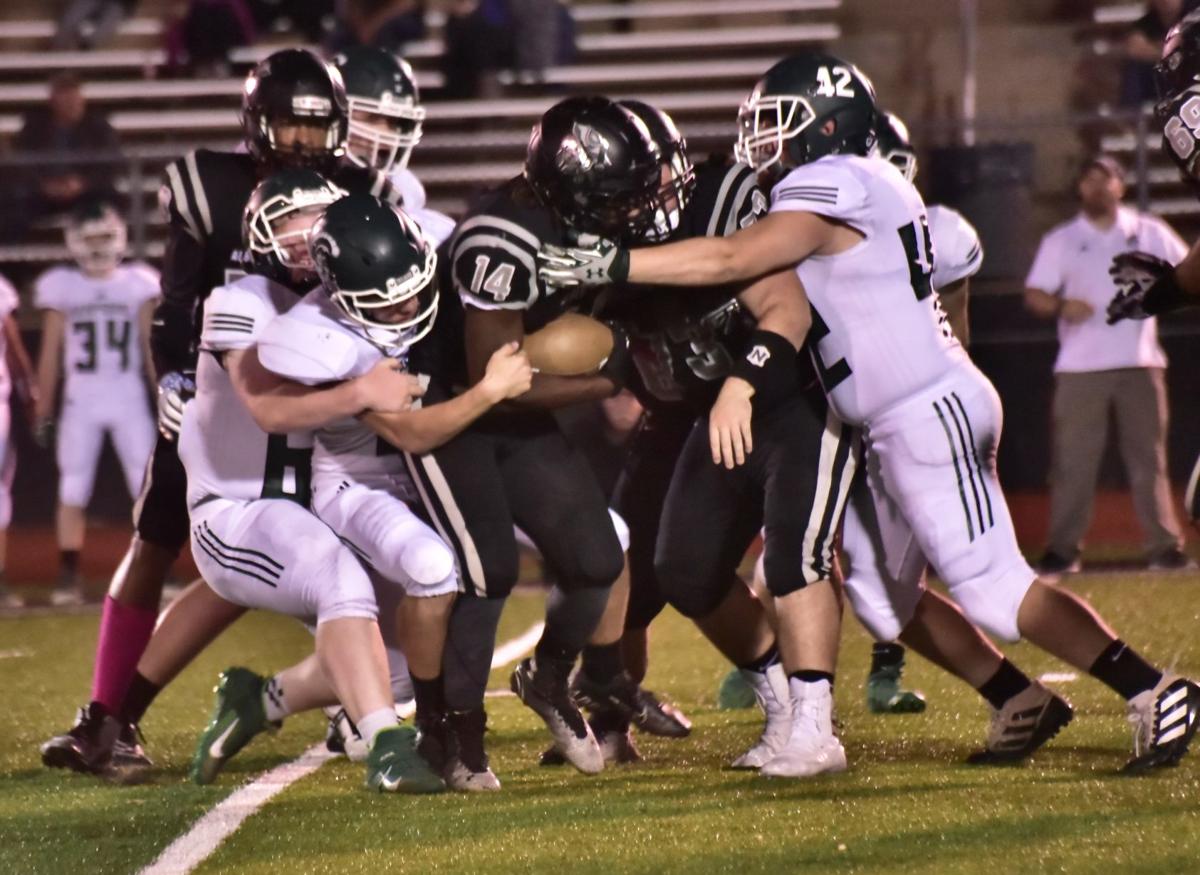 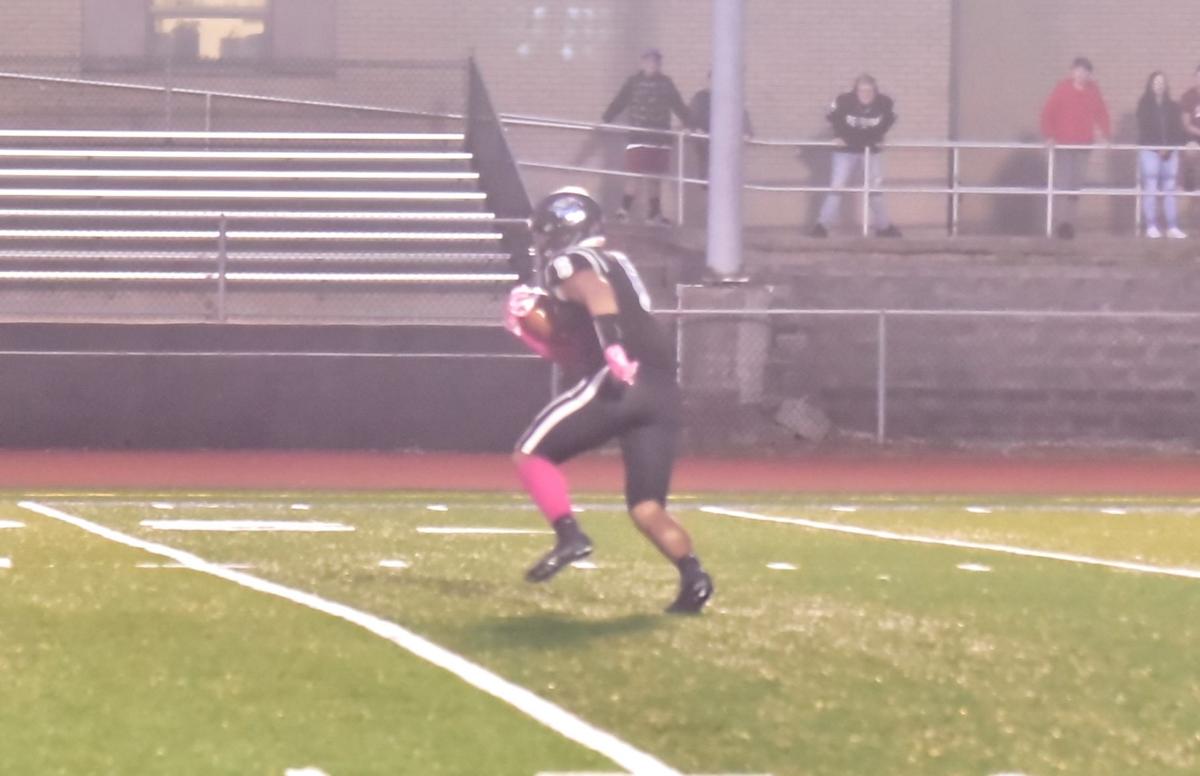 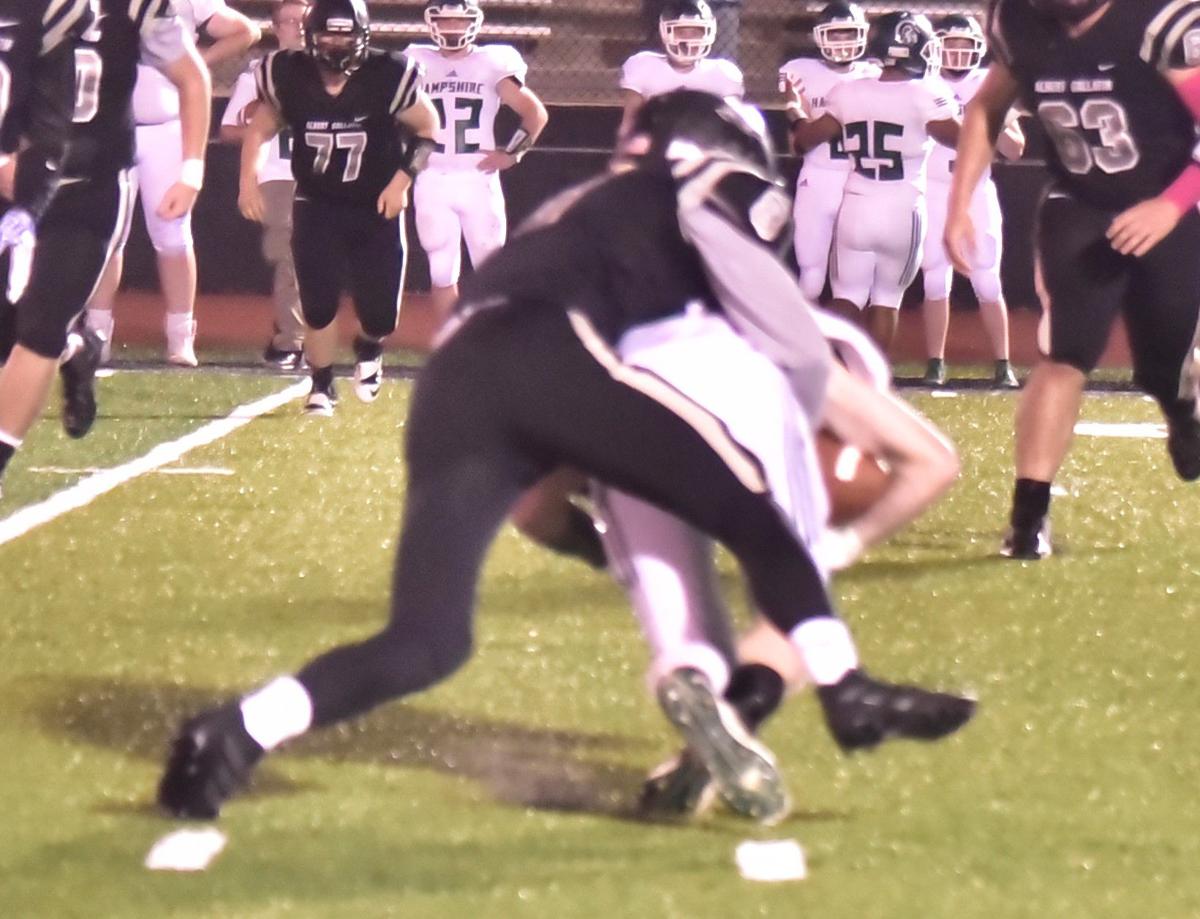 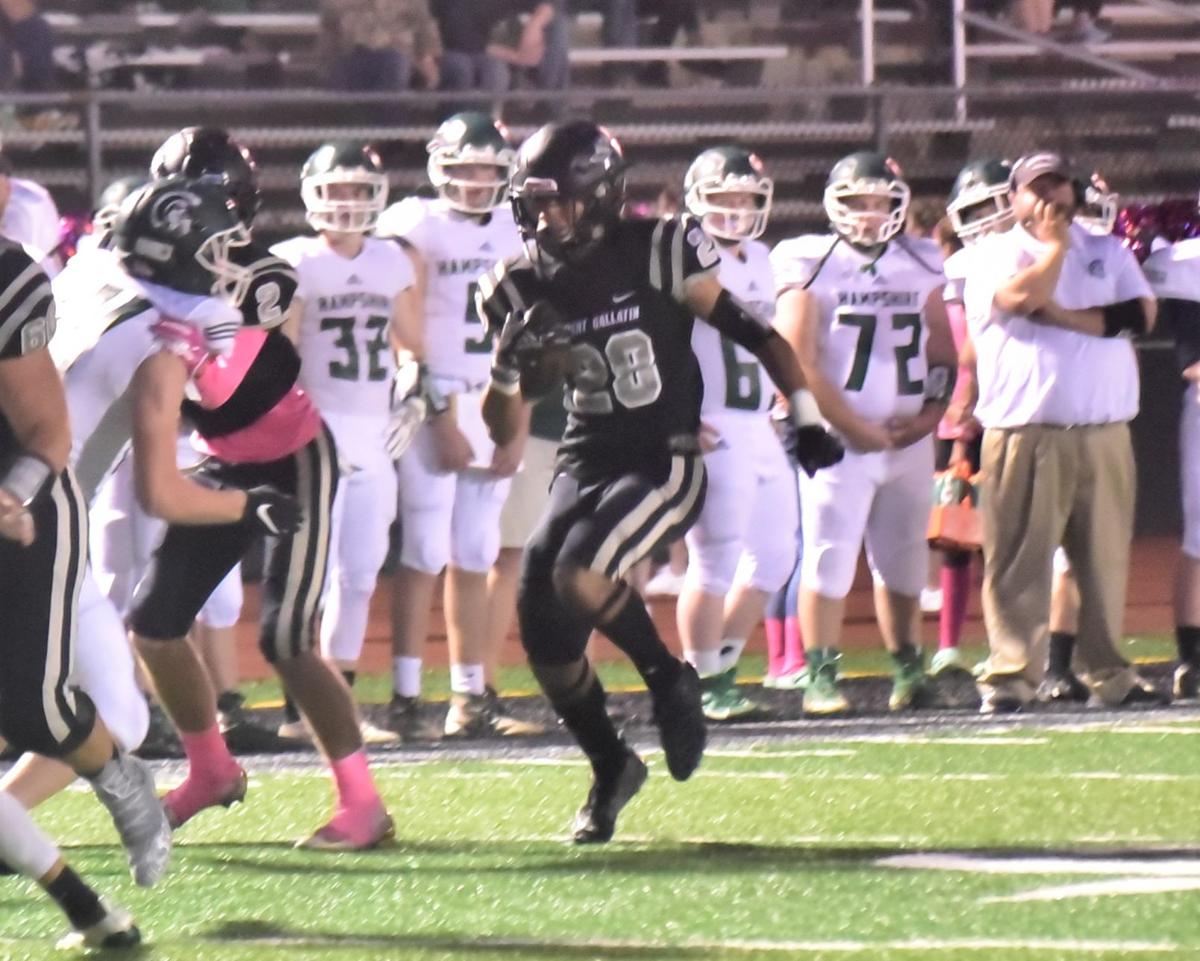 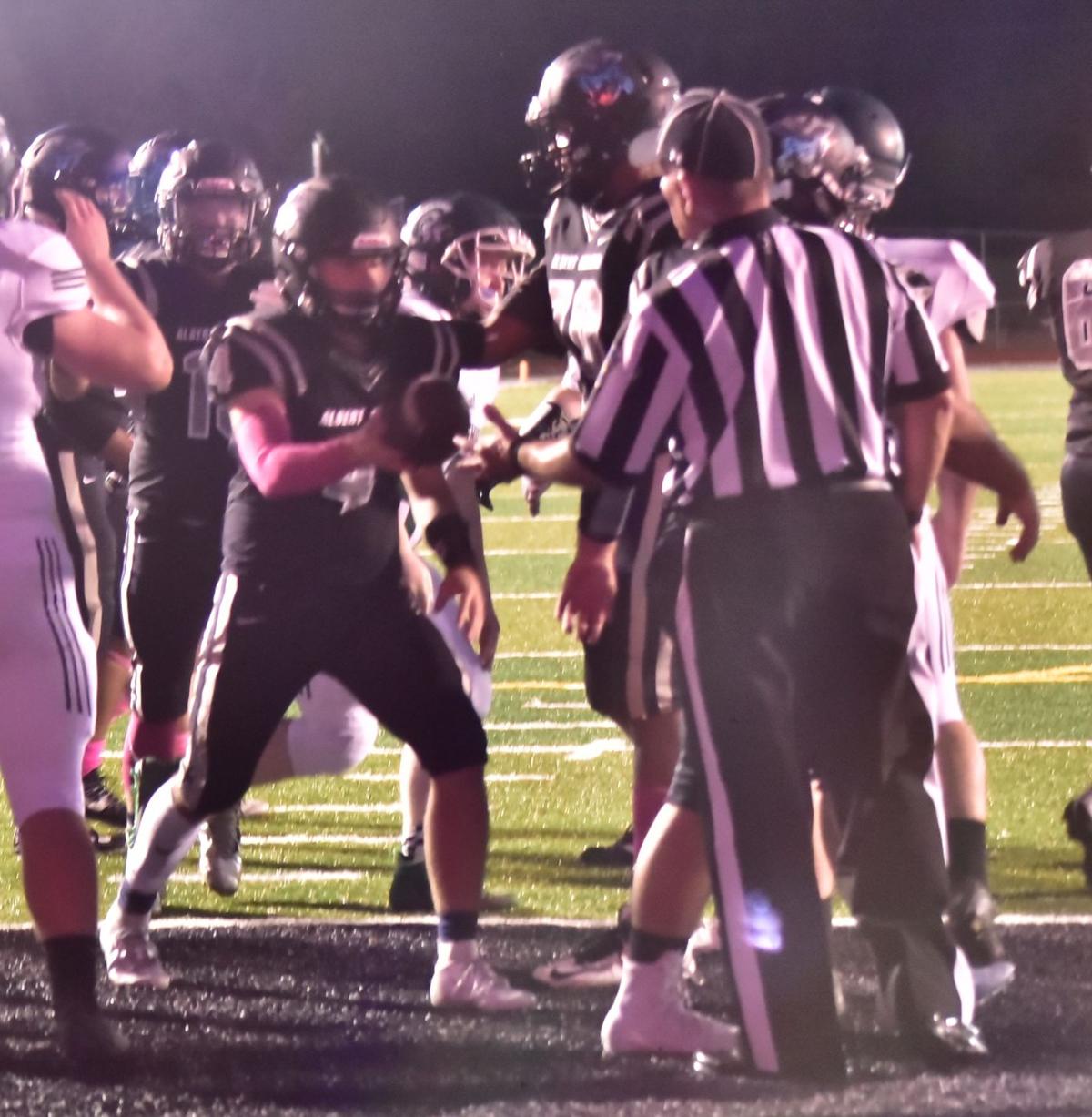 Albert Gallatin's Tristan Robinson hands the ball to the referee after scoring a touchdown in Friday's game against Hampshire at Colonials Stadium. 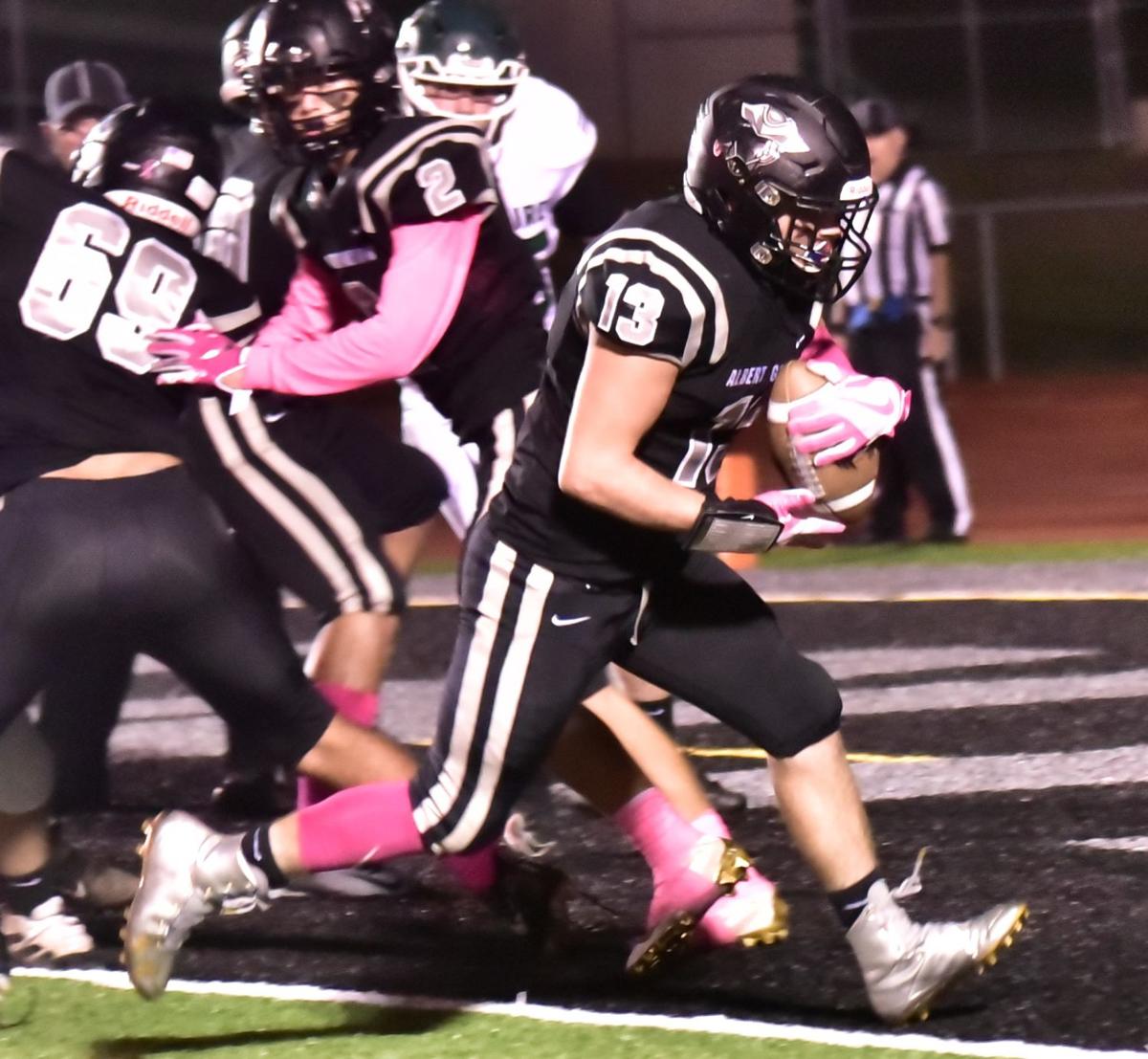 Albert Gallatin’s Kolby Varano crosses the goal line for a touchdown in the Colonials’ 49-0 win over Hampshire on Friday at Colonials Stadium. 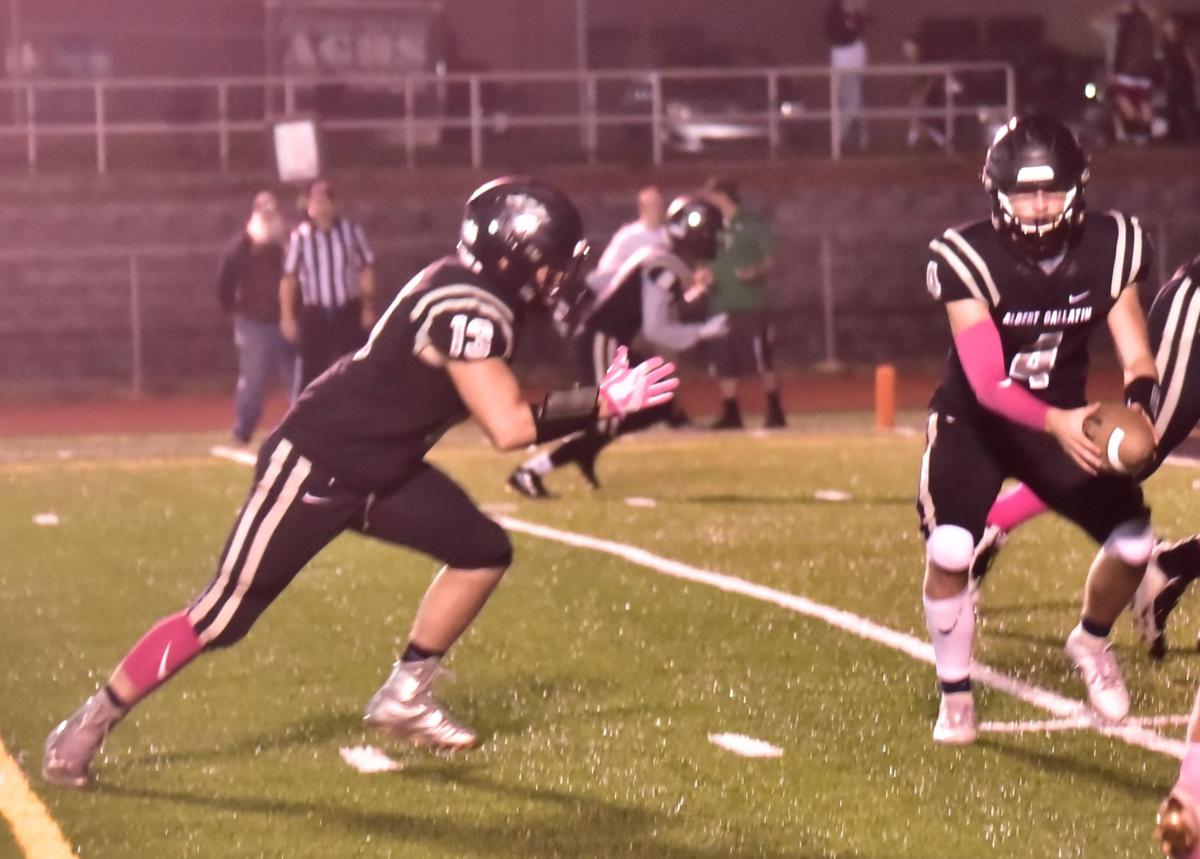 Albert Gallatin's Kolby Varano is about to take a handoff from Tristan Robinson during Friday's game against Hampshire at Colonials Stadium. Varano would score on the play, and add another score in the third quarter of Albert Gallatin's 49-0 victory.

Albert Gallatin's Kolby Varano takes a handoff from Tristan Robinson for a touchdown during Friday's game against Hampshire at Colonials Stadium. The Colonials blanked the Trojans, 49-0.

Albert Gallatin's Tristan Robinson hands the ball to the referee after scoring a touchdown in Friday's game against Hampshire at Colonials Stadium.

Albert Gallatin’s Kolby Varano crosses the goal line for a touchdown in the Colonials’ 49-0 win over Hampshire on Friday at Colonials Stadium.

Albert Gallatin's Kolby Varano is about to take a handoff from Tristan Robinson during Friday's game against Hampshire at Colonials Stadium. Varano would score on the play, and add another score in the third quarter of Albert Gallatin's 49-0 victory.

YORK RUN — Albert Gallatin earned its third shutout of the season on a historic night for the football program.

The Colonials blanked Hampshire, W.Va., 49-0, on Friday night at Albert Gallatin Stadium to improve to 5-1.

The Colonials, who have two games left, are guaranteed a winning season for the first time since the consolidation began in 1987.

"This has been all we wanted and more," Albert Gallatin coach Drew Dindl said. "We just wanted a chance to be competitive. It has changed the atmosphere at Albert Gallatin. The kids are happy, the community's happy, the school's happy, everybody's happy, and having a good time. It has been a pretty awesome experience."

Albert Gallatin's defense held the Trojans to 14 total yards (8 rushing, 6 passing). The Colonials intercepted two passes, with one being returned for a touchdown.

"I give credit to Coach (Gary) Pillar," said Dindl in reference to AG's defensive coordinator. "He gets them ready every week and they're flying to the ball. They've got a good mentality there."

AG had 288 yards rushing and 24 passing for 312, but the Colonials didn't have to put the ball much in the air. Malik Kirby had a game-high 65 yards on nine carries and Caleb Lang rushed for 41 yards on four attempts.

"We had a lot of touches tonight," Dindl said. "And most of those carries were for positive yards. Malik is our power guy, and he showed that tonight."

It didn't take Albert Gallatin long to get on the scoreboard, as Dylan Shea took the opening kickoff 89 yards for a touchdown and a 7-0 lead after Jace Bowers converted on the first of five PATs.

"To start the game off with that, you don't get much better," Dindl said. "He (Shea) is a big boy, but they underestimate his speed a little bit, and that's OK."

The Colonials extended their advantage to 14-0 when quarterback Tristan Robinson scored on a three-yard run at 7:42 of the first quarter. Robinson didn't have to do much passing, but was 2 of 4 for 24 yards and ran for 29 yards on five carries. Antonio Efford caught both of Robinson's passes.

"Tristan didn't throw too much tonight, but he didn't have to," Dindl said. "When he did throw, I thought he looked good. He hit the routes that we haven't been hitting, so I see some improvement there."

Hampshire was forced to punt on its second drive, but was able to pin Albert Gallatin deep inside its own territory at the 12. The Colonials responded with an 88-yard drive that was capped off by Bruno Fabrycki, who sprinted 12 yards to the end zone on third and three, as time expired in the first quarter, and AG held a 21-0 lead. Fabrycki gained 59 yards on five carries.

"I think the long drives are what I am most proud of this year," Dindl said. "We've had a lot of long drives, and I don't think there is much better than getting long drives and taking time off the clock. I am proud of those guys for continuing to do it over and over. I think we've had at least one every game."

Albert Gallatin made it three touchdowns in three drives on Kolby Varano's four-yard run with 5:00 remaining in the second quarter and a 28-0 advantage that was carried into halftime. Varano had 24 yards on four carries.

The Colonials put the mercy rule into effect when Varano returned an interception 37 yards to the Trojans' 1, and ran in the touchdown for a 36-0 lead after Bowers ran in the two-point conversion following a bad snap on the extra-point attempt.

Albert Gallatin increased its advantage to 42-0 when Tylar Frezzell returned an interception 38 yards for a touchdown at 8:02 of the third quarter.

Bowers got into the rushing action and capped the scoring on an 11-yard run at 7:38 of the fourth quarter. Bowers gained 28 yards on two carries.

"He (Bowers) got all kind of points tonight," Dindl said. "He has a heck of a leg and is only a freshman. He is really more of a running back for us, but he does a nice job kicking. We were able to put some other kids in the game to gain some experience.

"I take my hat off to Hampshire. We know the feeling of being on the other end of games like this, but they have a nice quarterback that can throw the ball. They are a young team, and once those guys grow up a little bit, they will be OK. They have a nice team."

The Colonials hosts Spring Mills, W.Va. next week in its home finale. Spring Mills defeated Hampshire, 28-21, in overtime on Sept. 13.

"We are not done yet," Dindl said. "Spring Mills is a team that is familiar with Hampshire. We just have to keep it going."