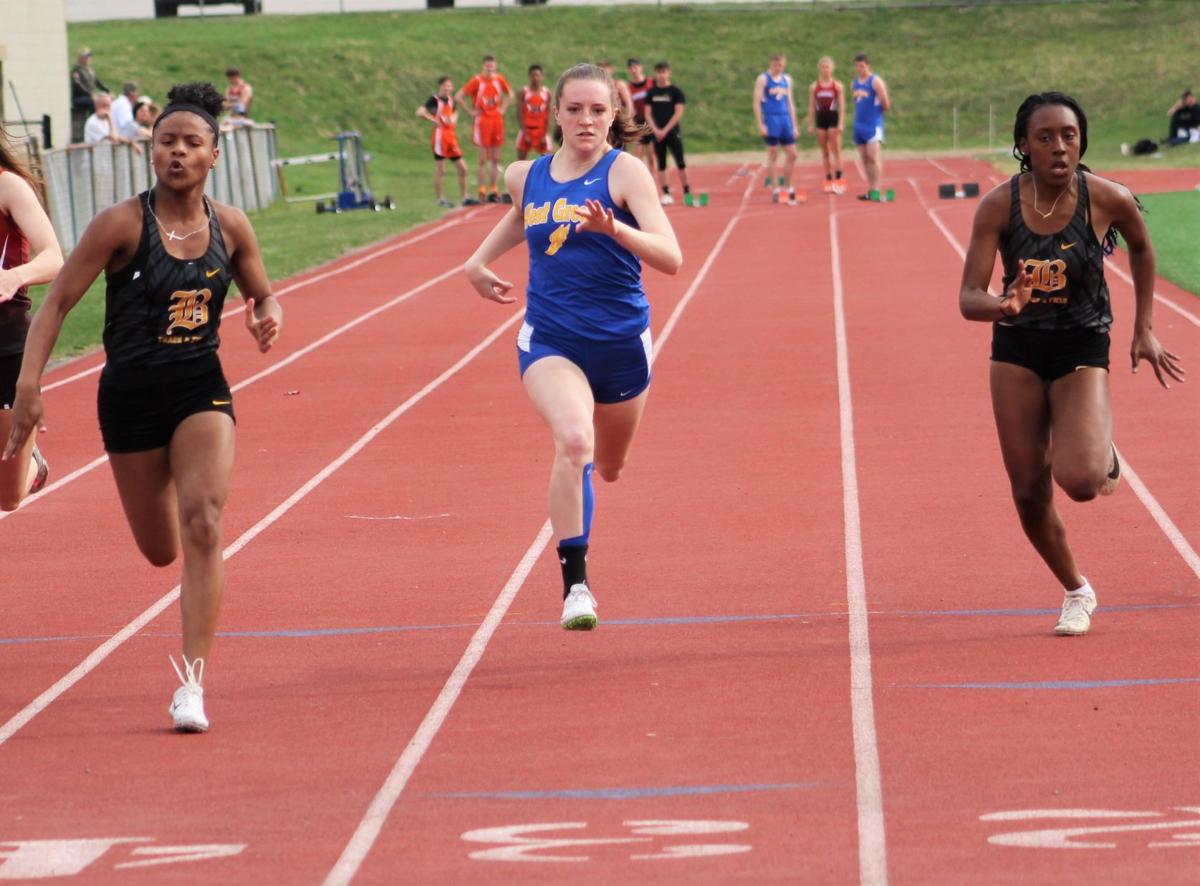 Brownsville’s Jamilah Copeland (left) leads West Greene’s Brooke Barner (center) and the Lady Falcons’ Aniya Tarpley to the finish line in the 100 during a Section 6-AA meet at Waynesburg Central on April 11, 2019. Copeland won with a time of 13.15 seconds. Copeland and Tarpley are among 14 seniors who had their final track season canceled because of the COVID-19 pandemic. 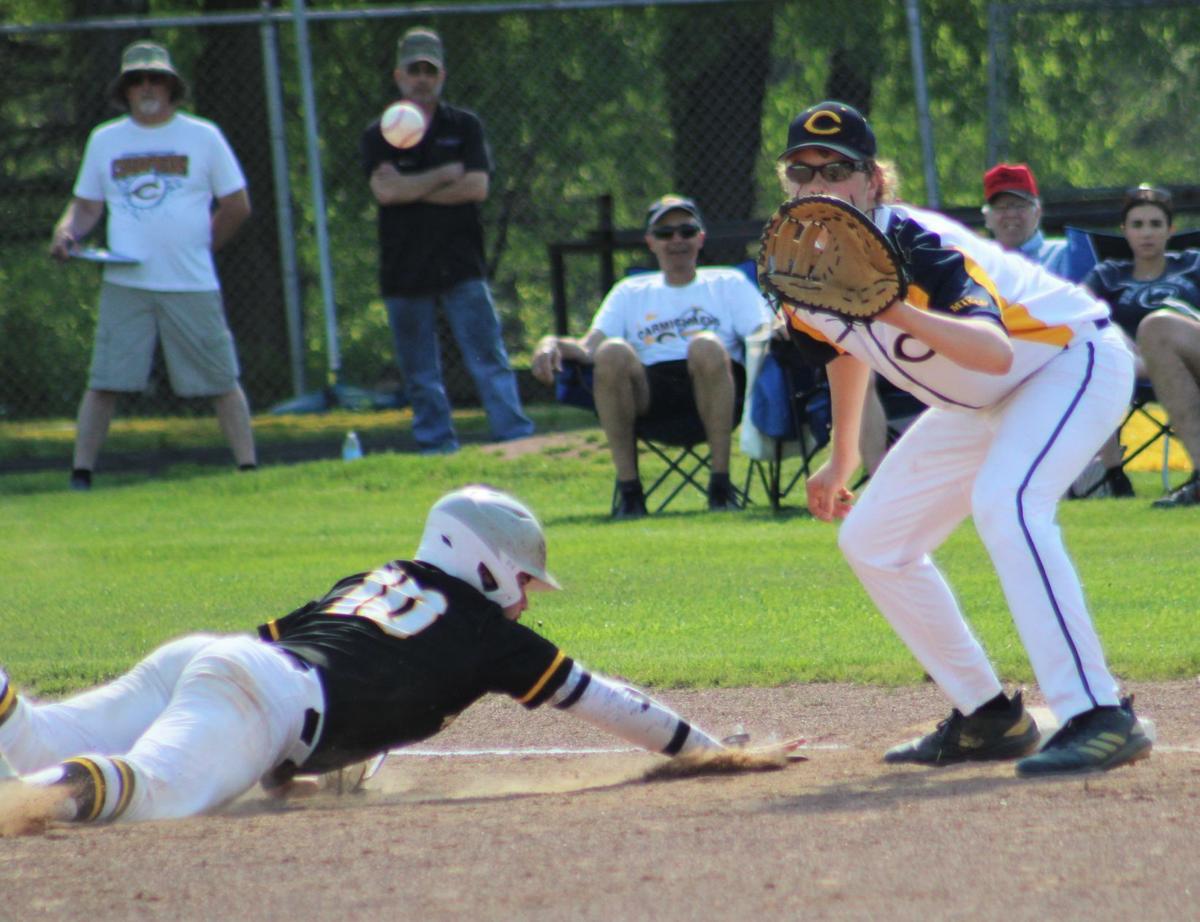 Brownsville’s Rocco Frisco (10) slides safely back into first base as Mikes’ first baseman Nick Ricco waits for the ball during the first inning of a Section 1-AA game at Carmichaels on May 8, 2019. Frisco is one of four seniors on the baseball team that had their final season canceled with the COVID-19 pandemic. 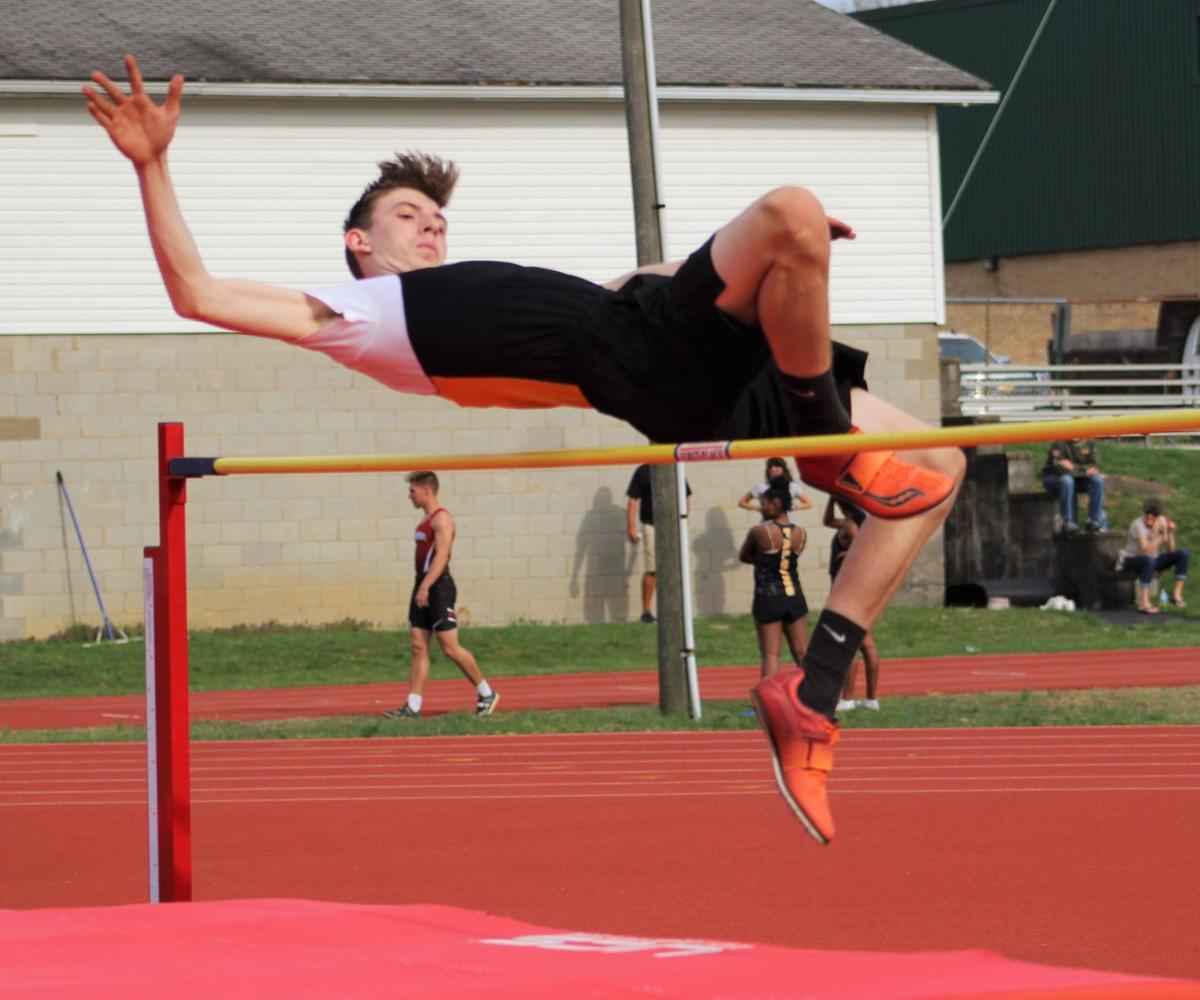 Brownsville’s Nick Seto clears the bar in the high jump during a Section 6-AA meet on April 11, 2019, at Waynesburg Central. Seto, who will attend Seton Hill University, was one of 14 seniors on the track team who had their final season canceled due to the COVID-19 pandemic.

Brownsville’s Jamilah Copeland (left) leads West Greene’s Brooke Barner (center) and the Lady Falcons’ Aniya Tarpley to the finish line in the 100 during a Section 6-AA meet at Waynesburg Central on April 11, 2019. Copeland won with a time of 13.15 seconds. Copeland and Tarpley are among 14 seniors who had their final track season canceled because of the COVID-19 pandemic.

Brownsville’s Rocco Frisco (10) slides safely back into first base as Mikes’ first baseman Nick Ricco waits for the ball during the first inning of a Section 1-AA game at Carmichaels on May 8, 2019. Frisco is one of four seniors on the baseball team that had their final season canceled with the COVID-19 pandemic.

Brownsville’s Nick Seto clears the bar in the high jump during a Section 6-AA meet on April 11, 2019, at Waynesburg Central. Seto, who will attend Seton Hill University, was one of 14 seniors on the track team who had their final season canceled due to the COVID-19 pandemic.

Brownsville Athletic Director Skooter Roebuck started to get the feeling the spring sports season would not happen as he saw other levels cancel their seasons.

“Division III canceled first, then Omaha (Division I) canceled,” said Roebuck. “I figured we’d not have a season if they’re all canceling.”

Roebuck’s baseball team entered the spring as one of the stronger teams in Class AA, but that was not the only crew drawing notice for Brownsville.

“Jim (Barak) had a couple of state kids (including state gold medalist and record holder Gionna Quarzo). That’s terrible to miss out on that chance,” said Roebuck.

Quarzo was the most noted of the senior class after repeating as state champion in the 3,200 in a record-breaking performance last May. She was the WPIAL gold medalist in the 3,200 (breaking her own record time) and took silver in the 1,600. Quarzo was also the two-time defending FCCA Track MVP.

“We have tons of medals in that crew with just the kids that went to the WPIAL last year,” said Barak. “This core group over the past five years was 40-3. The girls won the section as sophomores and juniors. They won the county meet.”

The addition of a couple girls had Barak and his staff really excited for the season.

“Gionna would’ve been just lights out. Our 3,200 relay girls, Jojo (Quarzo), Gionna (Quarzo), Ashton (Reposky) and Tessa (Dellarose) were running great. We had the Dellarose sisters, Tessa and Talia, out for the team. We had Gionna running the 4x400,” said Barak. “Our 4x100 relay made WPIALs.

“We had a pole vaulter, Mallory Dugan, for the first time. She’s a great kid and strong. We could’ve done some great things. We could’ve potentially taken 10 kids to states. That would’ve been phenomenal.”

Barak added, “These kids deserve to run a meet.”

Barak had nothing but good things to say about his group of athletes.

“I had a lot of great kids. As a whole group, they are great kids. I loved them in class,” praised Barak. “All these seniors, they were just the nicest kids. What a great group. I really mean that. But, I think this group can handle all that.”

Barak said his squad lost a lot with the canceled season.

“It’s not about the medals. You go put them on the shelf. It’s that experience they got, they were robbed of this year, is just heart-breaking,” said Barak.

Though a track season tends to be hectic, Barak misses the excitement of the meets.

“I have some of the greatest coaches around me, Brian Abbey, Brian Nicholson, Chad Gaster, Dave Hudock. They are just tremendous people,” said Barak.

Jane Bock and her Lady Falcons squad were all packed and ready to go for a preseason trip to Tennessee. Play a few games, build team unity and get in a few strong workouts.

But, the weekend before departure everything was shut down in the first wave of closures because of the COVID-19 pandemic.

“We were supposed to leave March 17. That was going to be our first action after a couple weeks of practice,” explained Bock. “It really helps to get ready for the season.”

Schools in Pennsylvania were initially shut down on Friday, March 13, for a couple weeks. But, those couple weeks later morphed into the remainder of the school year.

“We told the kids to still have hope. We thought possibly it might be a section situation and we’d play some games,” said Bock.

“I was looking forward to the season. They’re good kids and the season was just pulled out from under them,” said Bock. “We were looking to shoot for the playoffs.”

As with most spring programs, Bock was not able to say goodbye to her crew, but did come up with an innovative way to at least honor the seniors.

“Because this group of seniors is so special to me, we had a drive-by to each senior’s home and had Senior Day with the underclassmen. We had a senior picture taken to get a individual banner for the girls,” said Bock.

The loss of two graduating classes heading into the 2021 season will push the Lady Falcons’ hopeful move forward backwards.

“It will be definitely a rebuilding year. We have eighth graders who didn’t get to play (middle school softball) this spring. We will be starting from scratch,” explained Bock.

The long-time coach also lost a trip she had been playing for a long time.

“It’s an adjustment not coaching in the spring,” said Bock, adding, “One of my bucket list plans was to go to the softball College World Series. I was going with a former player. Now, I’m watching the world series on classic television.”

Bock said softball in her program was more than just pitching, hitting the ball and catching, lessons very appropriate to the way the 2020 season played out.

“I’ve always tried to teach my players being a member of the softball team is a privilege. They have a lot to live up to,” said Bock. “You have to appreciate what you have, appreciate the opportunity.”

“Preston, my shortstop, is going to Fairmont State, but not for baseball. Derek tore his ACL and hasn’t played since he was a sophomore, so he has no film,” said Roebuck.

“We finally get Connellsville on the schedule and geez ...,” lamented Roebuck.

While the seniors lost their final season, Roebuck said juniors lost a season to get a look from college scouts and sophomores and freshman lost a valuable year of experience.

“We were very junior-laden, but they will be coming back with sophomore experience,” said Roebuck. “We had a couple of left-handed pitchers. No one will see them. You can’t simulate a game.

“I had a freshman outfielder who I’d thought would play.”

Roebuck is uncertain how the future will play out as he prepares for the 2021 baseball schedule.

“The baseball schedule came out. We usually go south, but are we going to go? I’ll be scrambling to find someone (to fill the open dates),” said Roebuck.

The longtime baseball coach also misses being on the field, but tries to keep up to date with what’s going on with baseball.

“I told my wife I just want to go hit fungoes to someone, or no one,” Roebuck said with a laugh. “I’m a big Twitter guy. I follow all kind of coaches. There’s always something on Zoom.”

Tennis has an early starting date, but Dan LoNigro’s squad was grounded before getting into the swing of things.

“We didn’t have any matches. We had to cancel with Trinity and Connellsville because of low numbers. We had three kids ineligible for four weeks. I was out recruiting (to fill out the roster),” said LoNigro.

“What’s sad is the courts are all locked up (with school shut down). I have some newbies on the team. I lost everything.”

The boys tennis team didn’t have any seniors this spring, but, while coronavirus canceled the 2020 season, the school board might close out the program for the foreseeable future. A vote to eliminate the boys and girls tennis teams and the golf team in a cost-cutting move was tabled at the most-recent school board meeting last week.

“The small sports with small numbers go first,” said LoNigro, who was entering his 30th year as tennis coach. “They invested $90,000 three years ago on the three tennis courts. I’ve done everything I can do to save the school money.”

The boys have co-opted with Frazier in the past, and were scheduled to do the same with California next season, but that is all in limbo now.

LoNigro feels for all seniors and their lost season.

“I feel so bad for the seniors, especially for the Laurel Highlands baseball team,” added LoNigro.