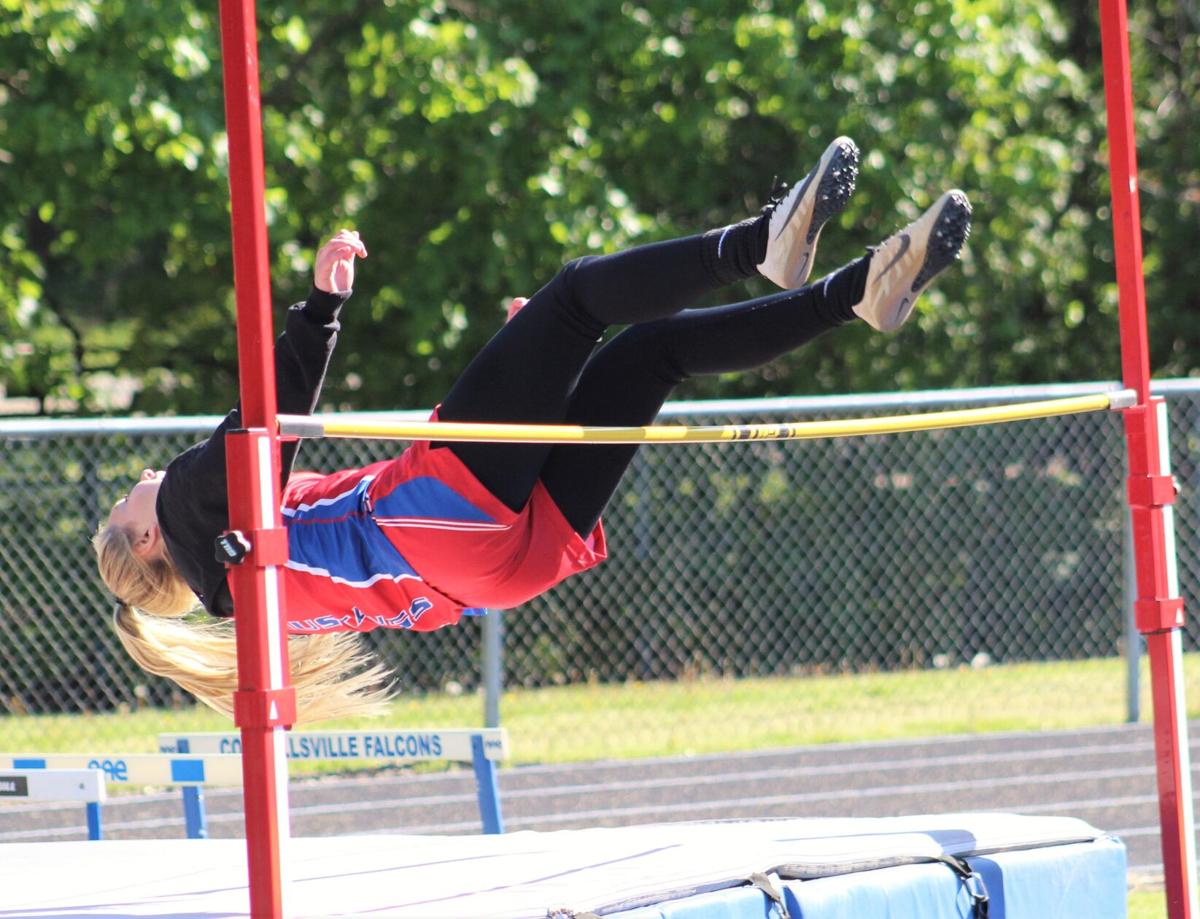 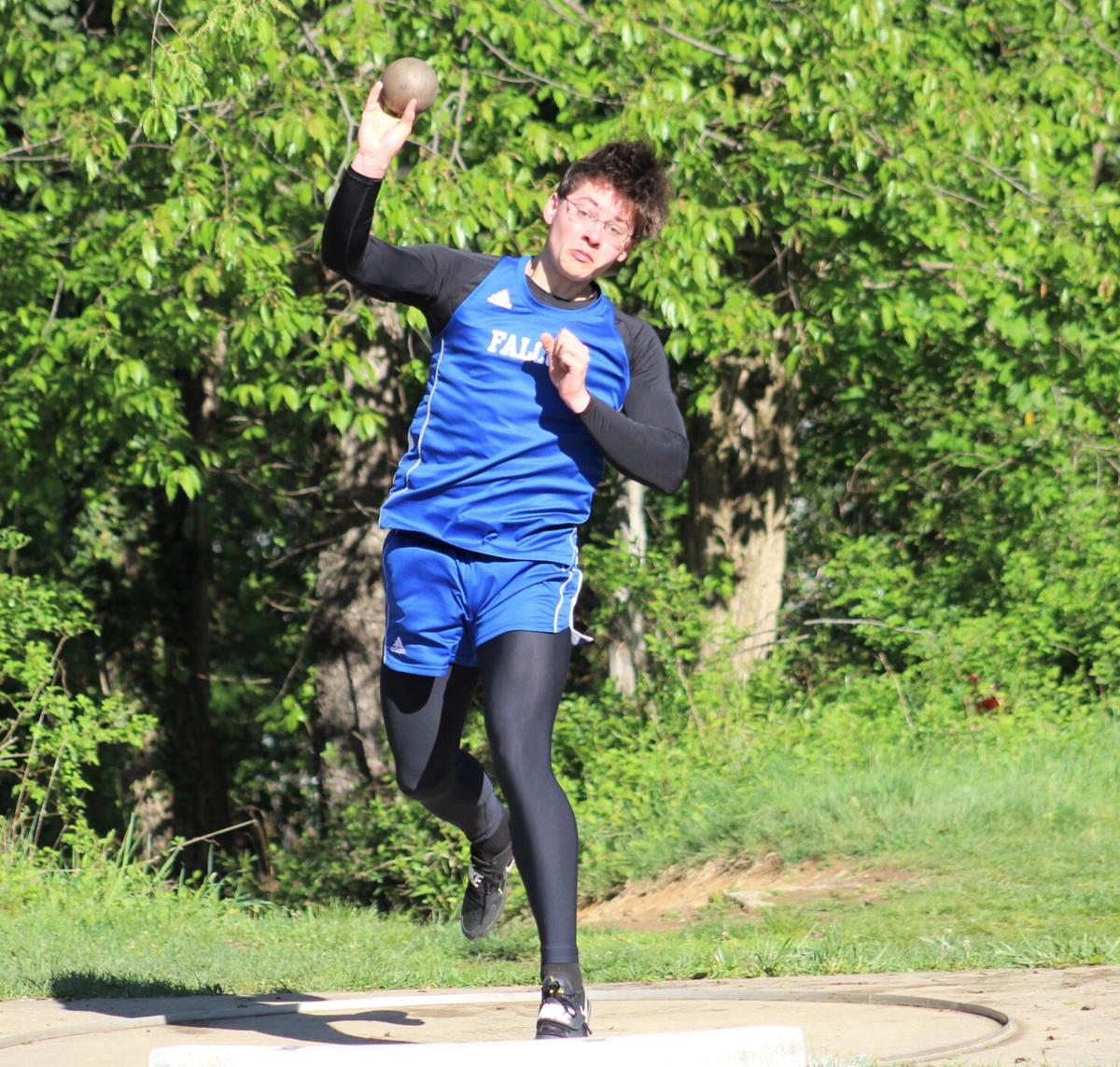 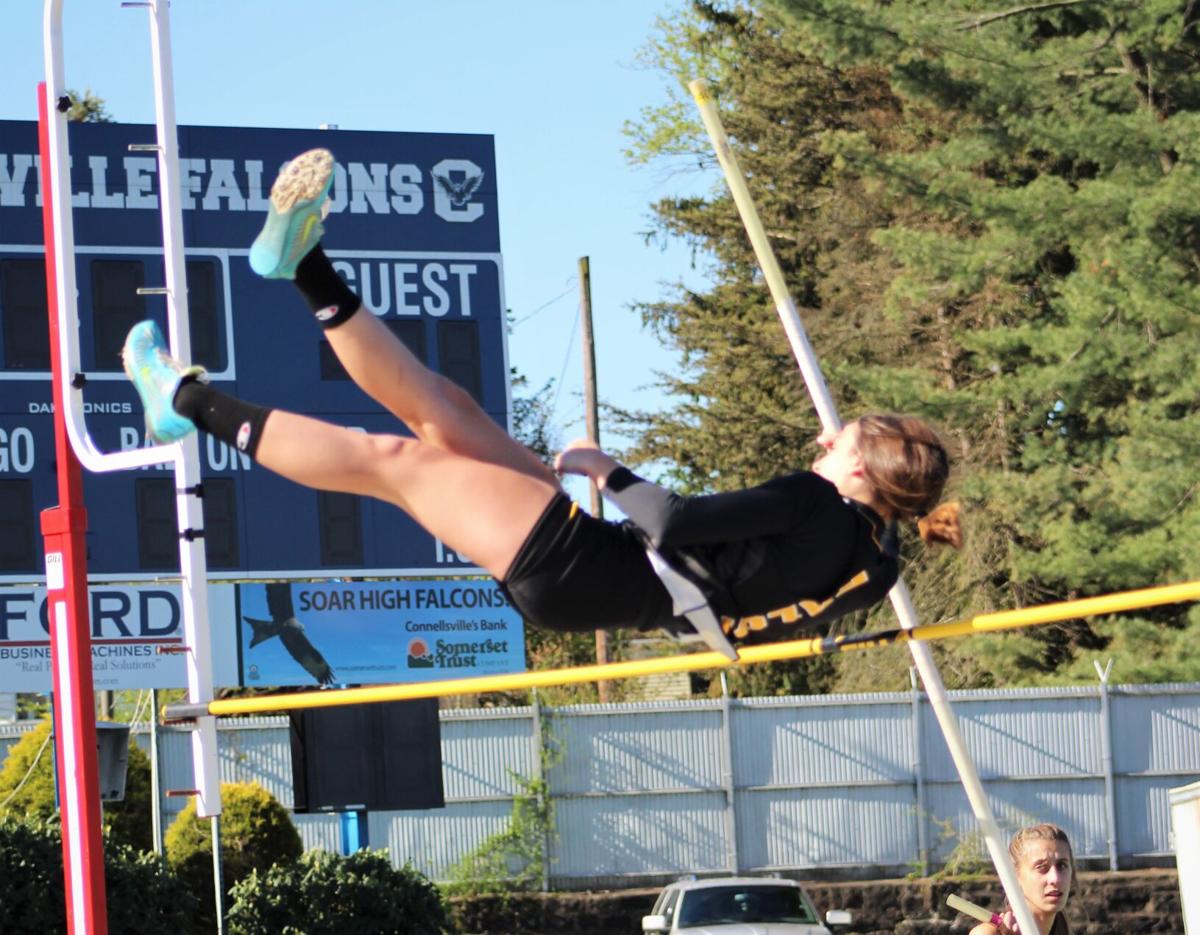 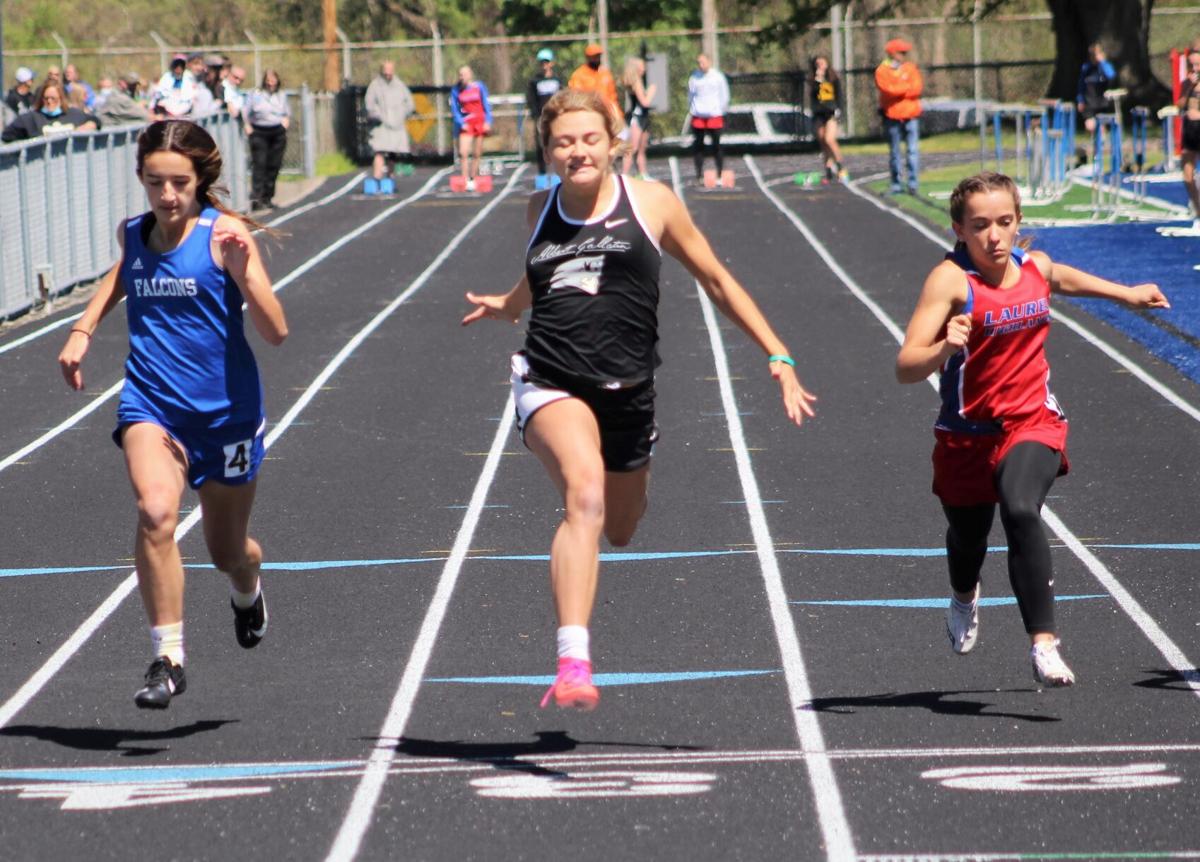 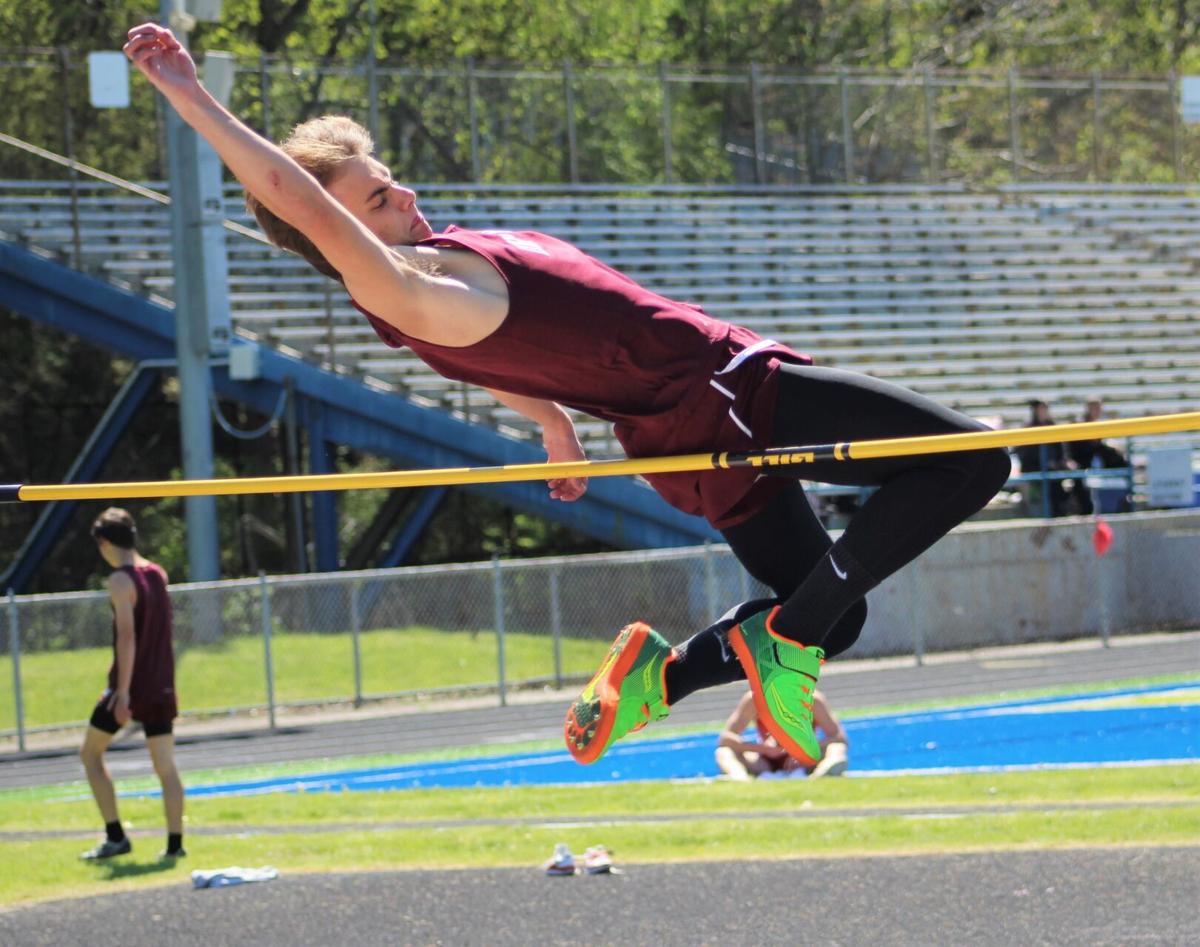 Uniontown's Sam Jubin easily clears the bar in the high jump during Saturday's FCCA Track & Field Championship held at Connellsville Stadium. Jubin won the gold medal with a jump of 5-10. 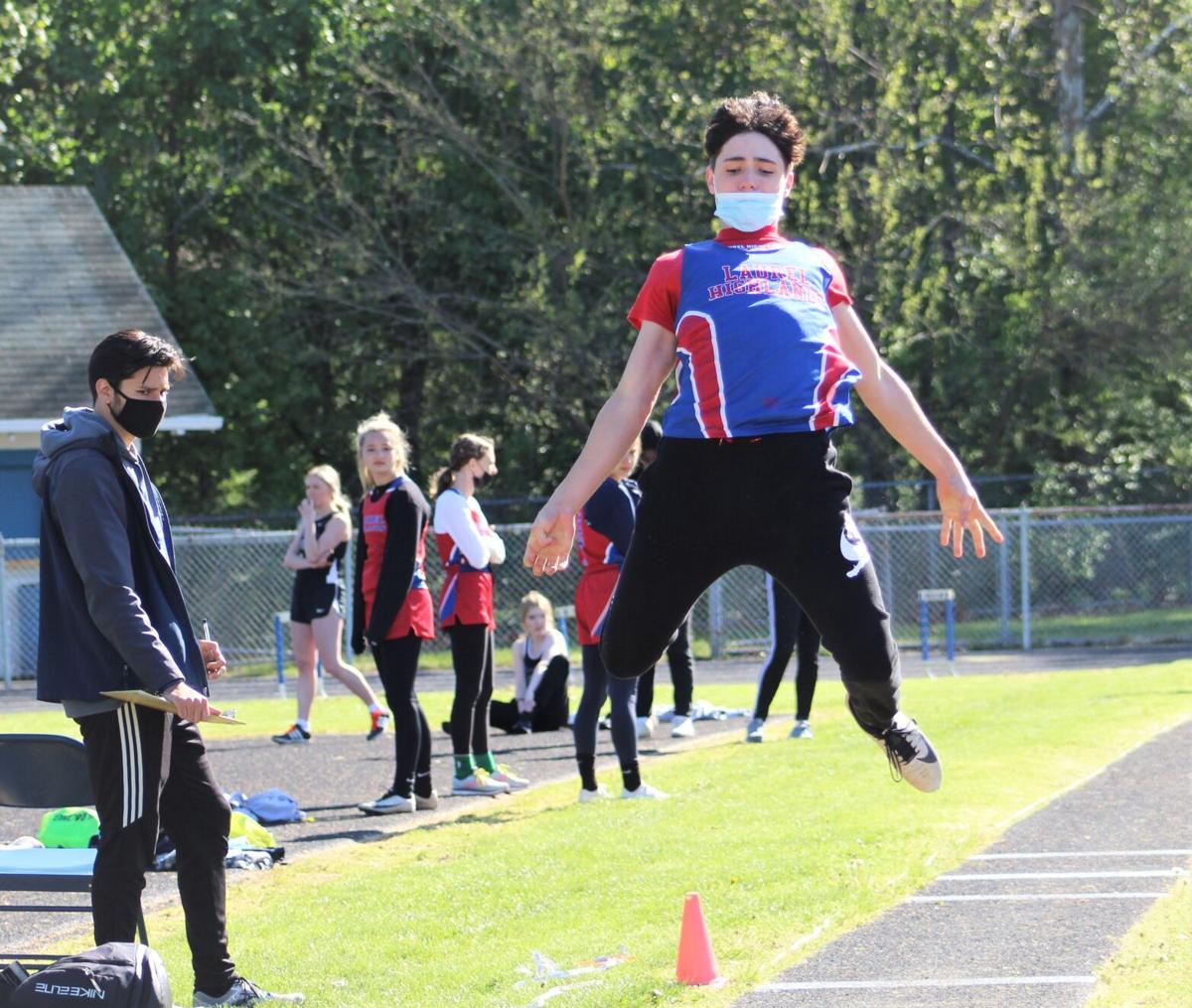 Laurel Highlands' Hunter Kooser flies through the air before landing in the pit in the long jump during Saturday's FCCA Track & Field Championship held at Connellsville Stadium. 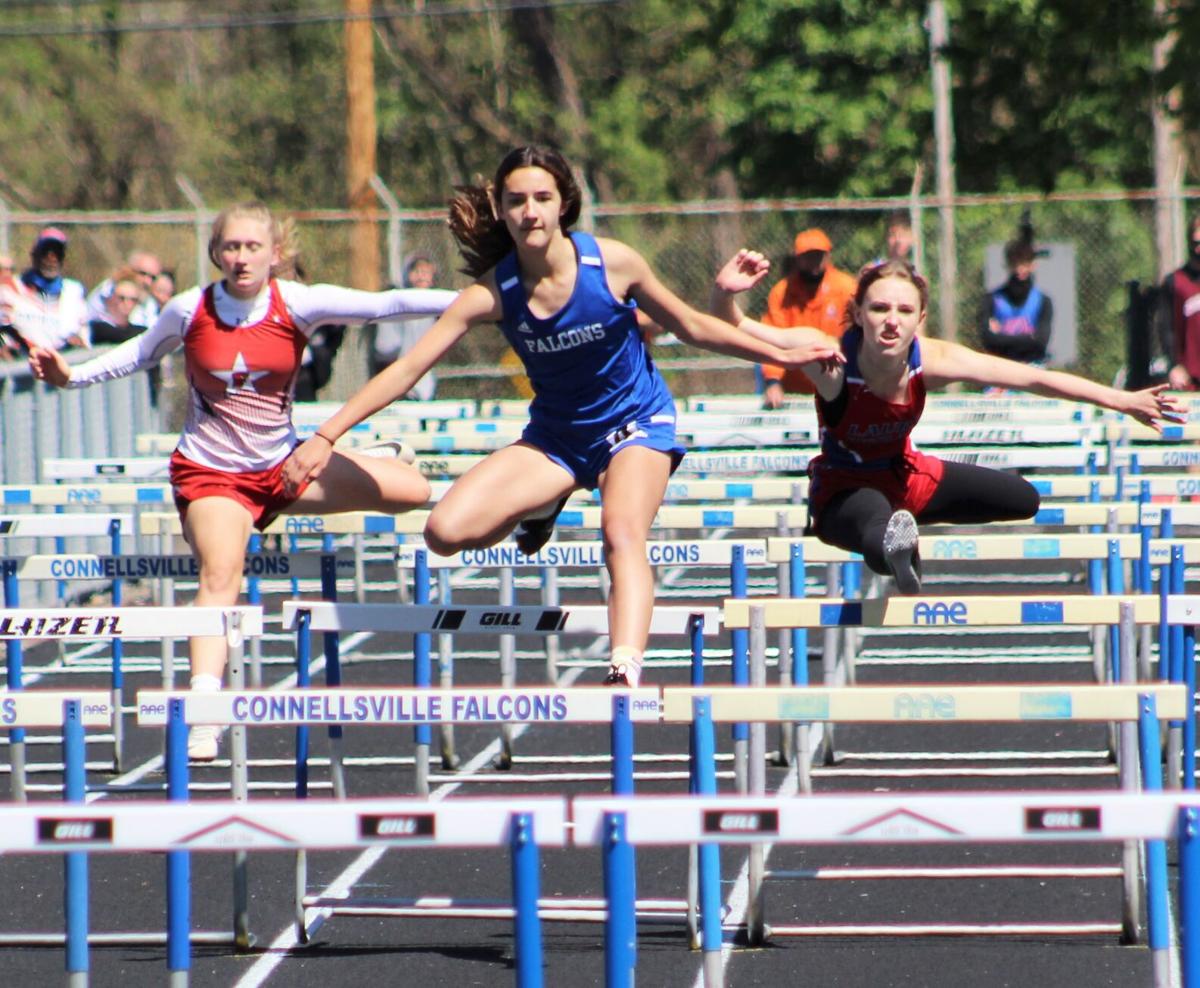 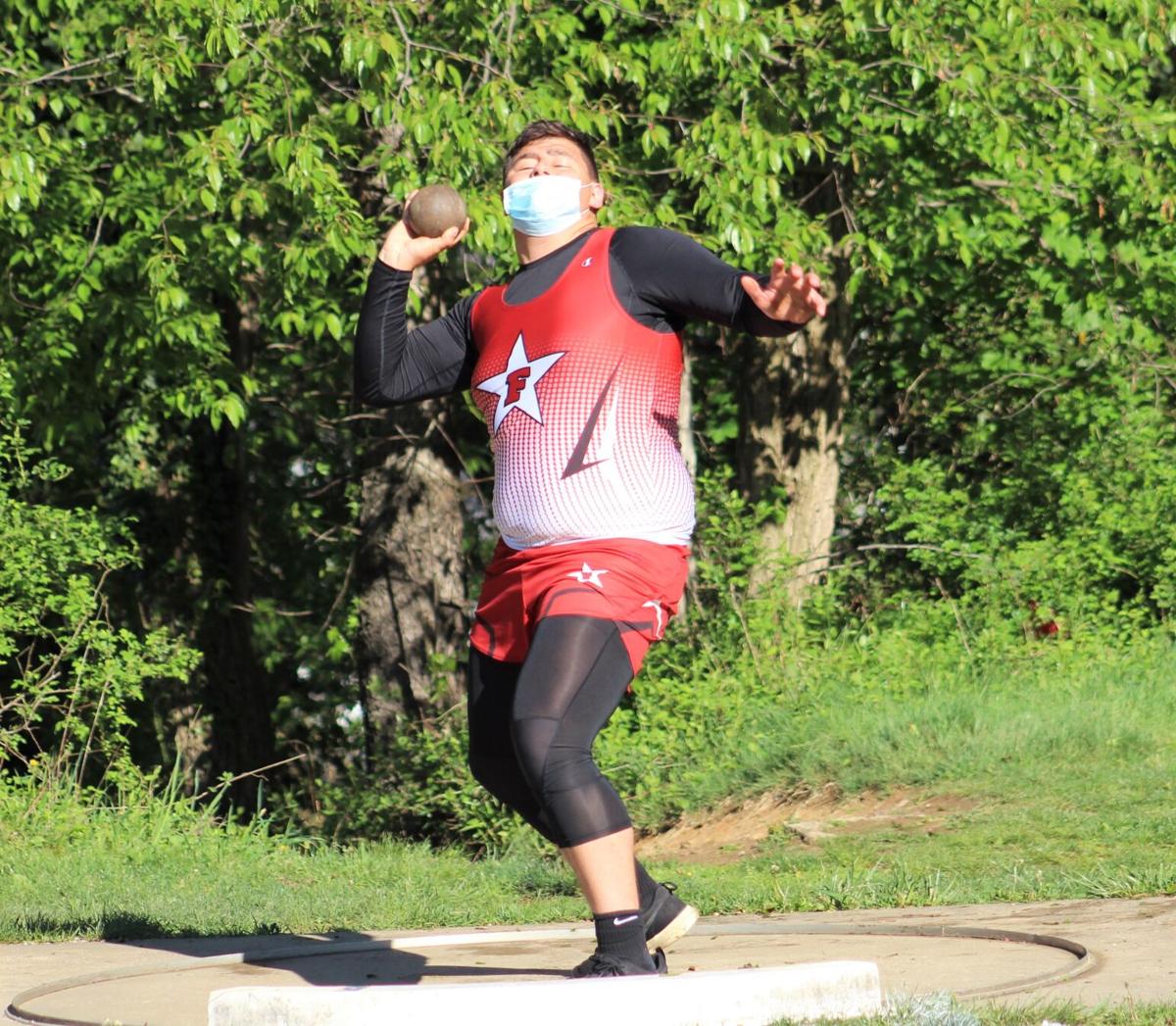 Frazier's Matthew Kordich releases the shot put during Saturday's FCCA Track & Field Championship held at Connellsville Stadium. The senior finished fourth in the shot put and was second in the javelin. 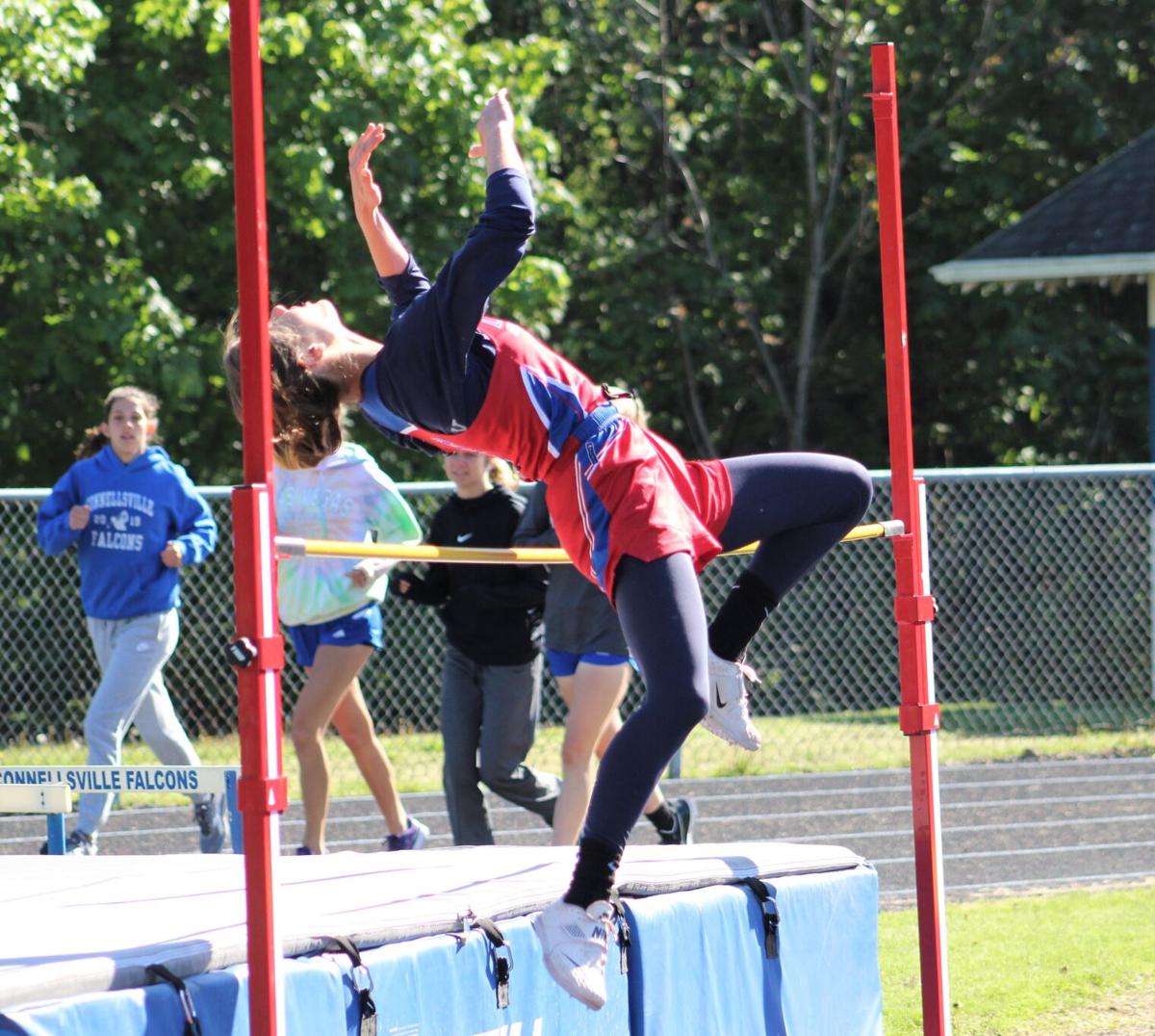 Laurel Highlands' Annika Tajc arches over the bar for a successful attempt in the high jump during Saturday's FCCA Track & Field Championship held at Connellsville Stadium. 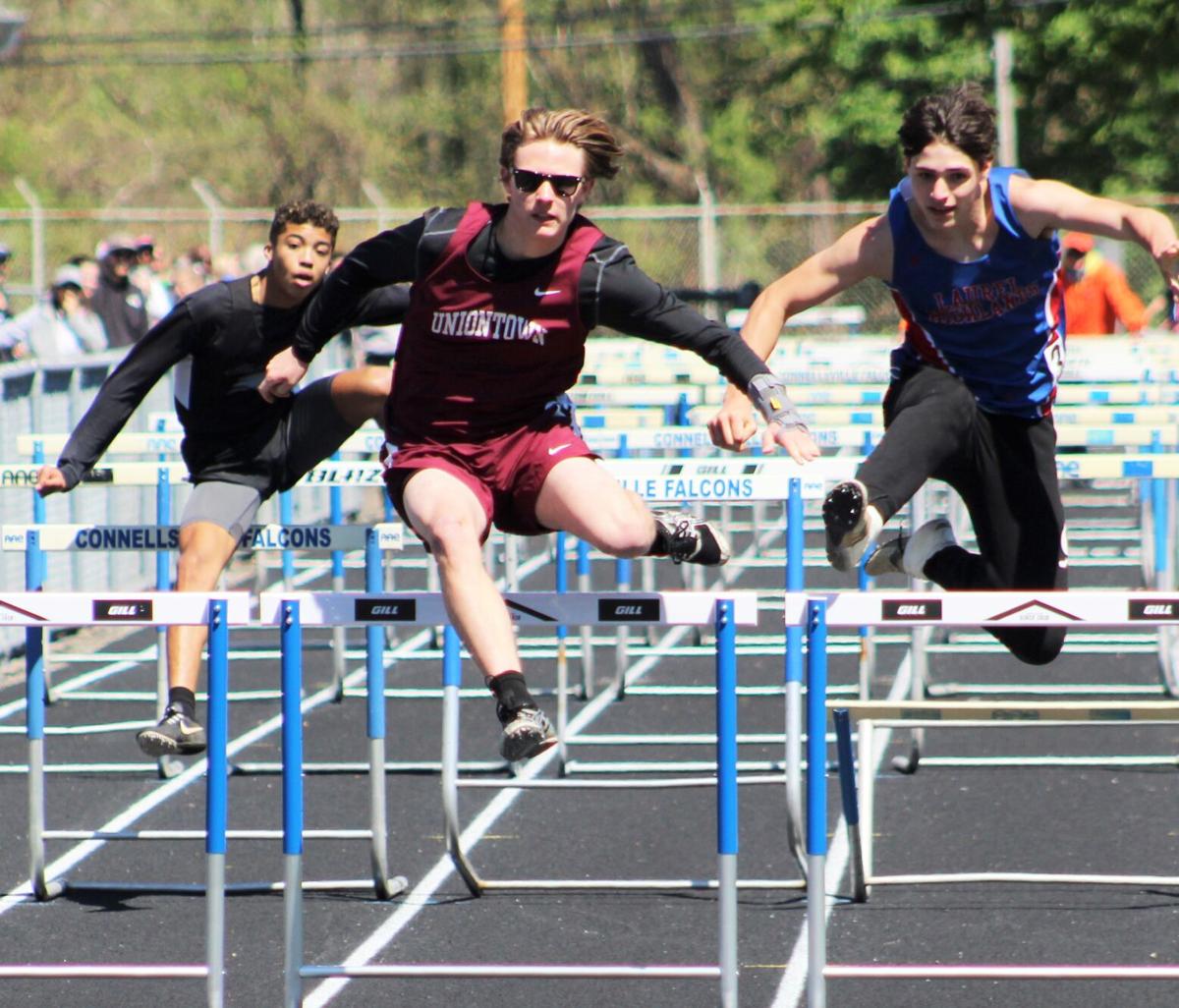 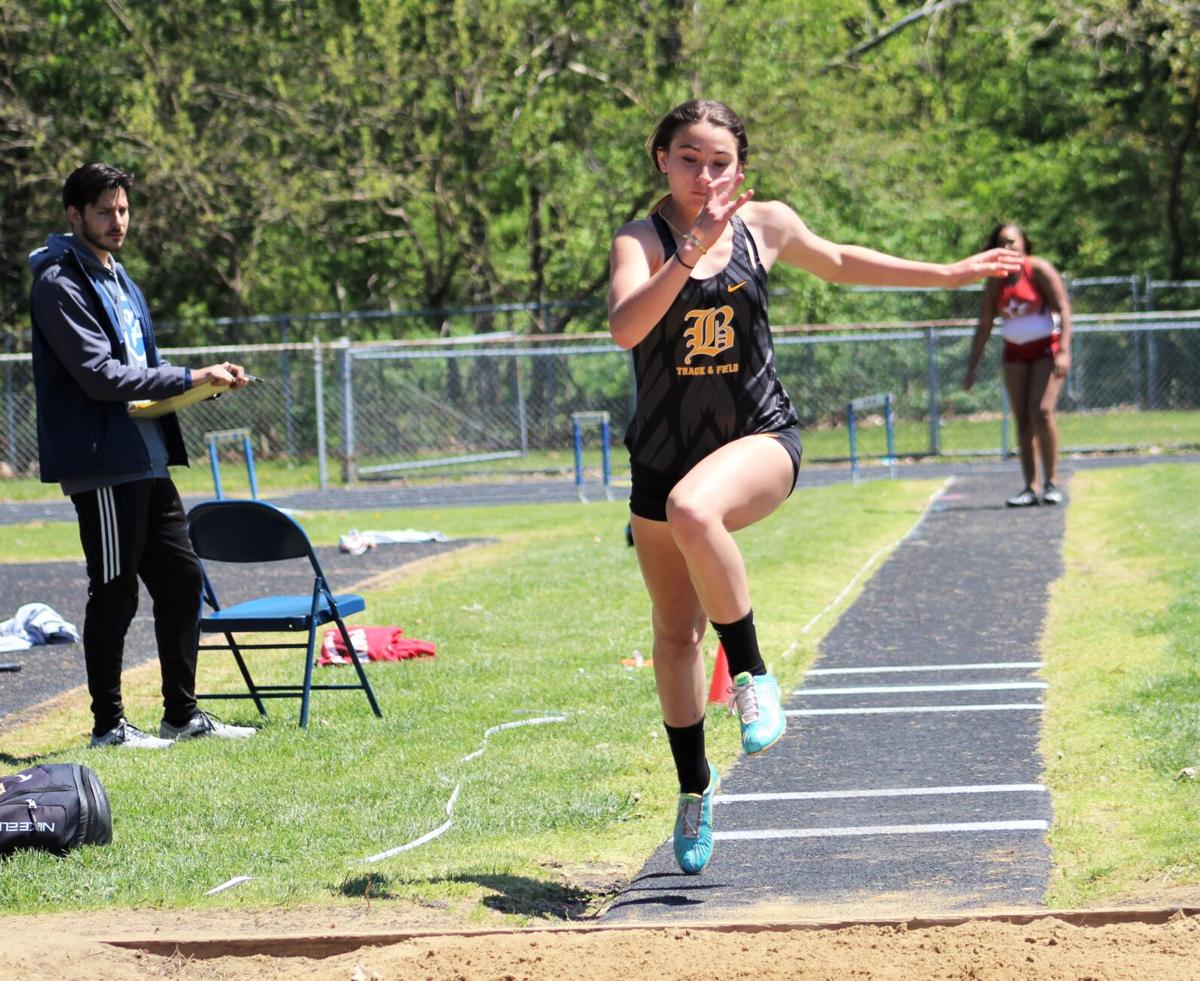 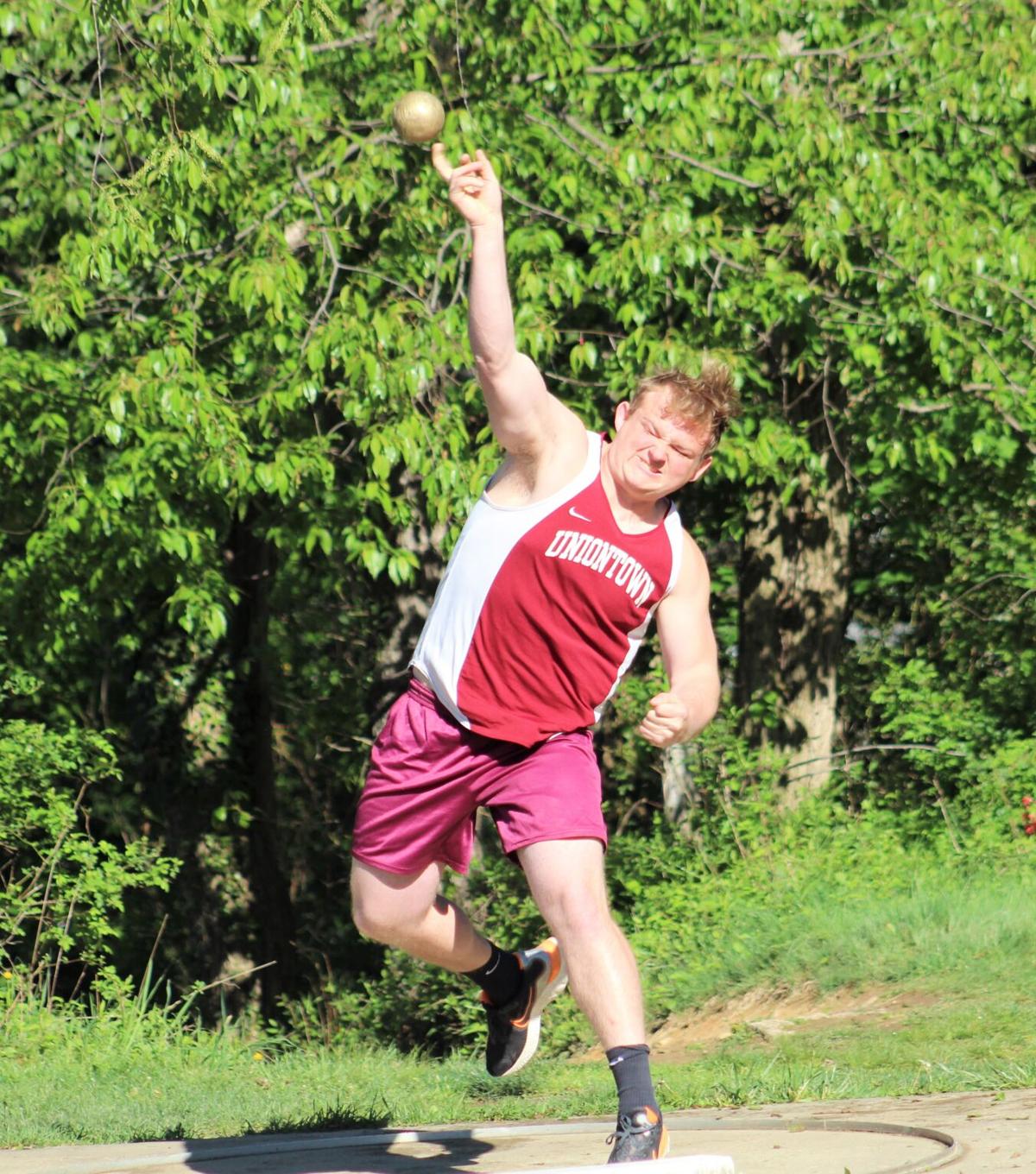 Uniontown's Sam Jubin easily clears the bar in the high jump during Saturday's FCCA Track & Field Championship held at Connellsville Stadium. Jubin won the gold medal with a jump of 5-10.

Laurel Highlands' Hunter Kooser flies through the air before landing in the pit in the long jump during Saturday's FCCA Track & Field Championship held at Connellsville Stadium.

Frazier's Matthew Kordich releases the shot put during Saturday's FCCA Track & Field Championship held at Connellsville Stadium. The senior finished fourth in the shot put and was second in the javelin.

Laurel Highlands' Annika Tajc arches over the bar for a successful attempt in the high jump during Saturday's FCCA Track & Field Championship held at Connellsville Stadium.

Brownsville sophomore Jolena Quarzo had won the 1,600 and 800 in record-breaking times, and was the prohibitive favorite to win the 3,200. She also had a share of the Lady Falcons’ points secured with a third-place in the 3,200 relay.

But, the busy day on the track seemed to catch up with Bosnic and the freshman was not able to secure a place in the final sprint. Still, Bosnic’s first county meet produced 28 points to finish second to Quarzo’s 31½.

Connellsville teammate Isabella Roebuck was also in contention for the Field MVP with first-place finishes in the shot put (28-11) and discus (105-1).

However, Laurel Highlands’ Mia Pierce edged out Roebuck with a first-place finish in the javelin (92-1), a silver medal in the discus, and bronze in the shot put for a total of 24 points.

Roebuck was looking for longer throws in the shot put and javelin, but was very happy with her effort in the discus.

IN THE RUNNING: Uniontown’s Brandon Hebda was is contention for Track MVP honors after running down Connellsville’s Zach Bigam to win the 1,600 in 4:47.21 and holding off teammate Dalton Grimes for first place in the 800 with a time of 2:09.35. He also ran a leg on the Red Raiders’ victorious 3,200 relay for 22½ points entering the final relay.

Connellsville’s Ky’ron Craggette also had 22½ points entering the 1,600 relay after winning the 100 and 200, and anchoring the Falcons’ 400 relay to a first-place finish.

The Falcons came through for Craggette to give the senior 2½ more points to secure the individual title.

HISTORY MAKING: Brownsville’s Jolena Quarzo etched her name in the annals of county meet history by winning the 1,600, 800 and 3,200 in record-breaking times. The 800 record was set in 2003 by Uniontown’s Scarlett Graham, and the other two distance marks were held by her older sister Gionna, from 2019.

Teammate Malaree Duggan-Hudock made her mark on the Brownsville program after she cleared 6 feet in the pole vault for fifth place, the first medal in the event won by a Lady Falcon.

Duggan-Hudock later leapt 32-2½ for the gold medal in the triple jump.

UP AND OVER: Annika Tajc spent her day at the county meet by jumping over obstacles, and did a pretty good job doing so.

Tajc didn’t have to jump over anything in the 400 relay, but did have to safely secure the baton as she helped the Fillies finish first.

“My goal wasn’t really to win. I just wanted to come out and score points for the team,” said Tajc, who helped the Fillies win the team title. “I wanted to finish top three in all my events, which I did.

“This was my first county meet ever and it was very successful for us.”

YOUNGBLOODS: Uniontown freshman Dominic Scott also spent his afternoon jumping over obstacles, and did so successfully with a first-place finish in the 110 high (17.97) and a silver medal in the 300 intermediate hurdles (44.84).

“My time in the high hurdles was better in the prelims, but it was still where I wanted it to be,” said Scott.

Scott finished second to Laurel Highlands’ Vincent Blout in the 300 intermediate hurdles by the slimmest of margins, .01 seconds.

“He got me after the last hurdle,” said Scott.

“I wanted to hopefully get a PR in both hurdles and have a good first county meet,” Scott said of his approach to the meet. “It’s good I got a county championship in the high hurdles and second in the 300 (intermediate hurdles).”

Brownsville freshman Aziya Dade placed fourth in both the 100 and 200, and helped the Lady Falcons’ 400 relay win the silver medal.

“I could’ve done better. I just wanted to win and do better than I did,” said Dade.

“That was a PR by 15 feet,” said a smiling Larkin. “I felt so good coming into today. As soon as the javelin left my hand, I knew it was first.”

Looking forward to the WPIAL finals, Larkin added, “Does this set me up for the WPIALs? Yes, yes.”

“Jolena is crazy fast,” complimented Angelo. “She helped push me a lot. She’s just great overall. I can’t be upset about that.”

Angelo had a cheat sheet, of sorts, with her for the race.

“I wrote my split times on my hand,” Angelo said with a smile.

GRIZZLED VETERANS: Kordich had a solid day in the throwing events with a silver in the javelin and fourth-place finish in the shot put.

“It’s been a good week,” said Kordich. “I just wanted to place. My best finish in the javelin before was third.”

“I was really nervous in the 100. I was not an okay time,” said Sanders. “I did worse in the 300 hurdles than I expected. I’m glad it was here than at Baldwin or the WPIALs.

“I need to work on the straightaway in the 300 hurdles. I was stuttering right after the curve. Once I start, it’s hard to get it out of your head.

RUN ANGRY: Connellsville’s Zach Bigam seemed upset after Hebda caught him by surprise to win the 1,600.

Bigam didn’t leave anything to chance in the 3,200, pulling out into the lead and holding off the field for the gold medal in 10:29.63. Uniontown’s Mason Stewart finished second in 10:33.62.

THE GANG’S ALL HERE: All seven county schools were represented in the meet with all seven girls teams scoring at least one point.

ON THE SCHEDULE: The Laurel Highlands and Brownsville girls, along with the Connellsville boys, will compete in the WPIAL team semifinals on Tuesday.