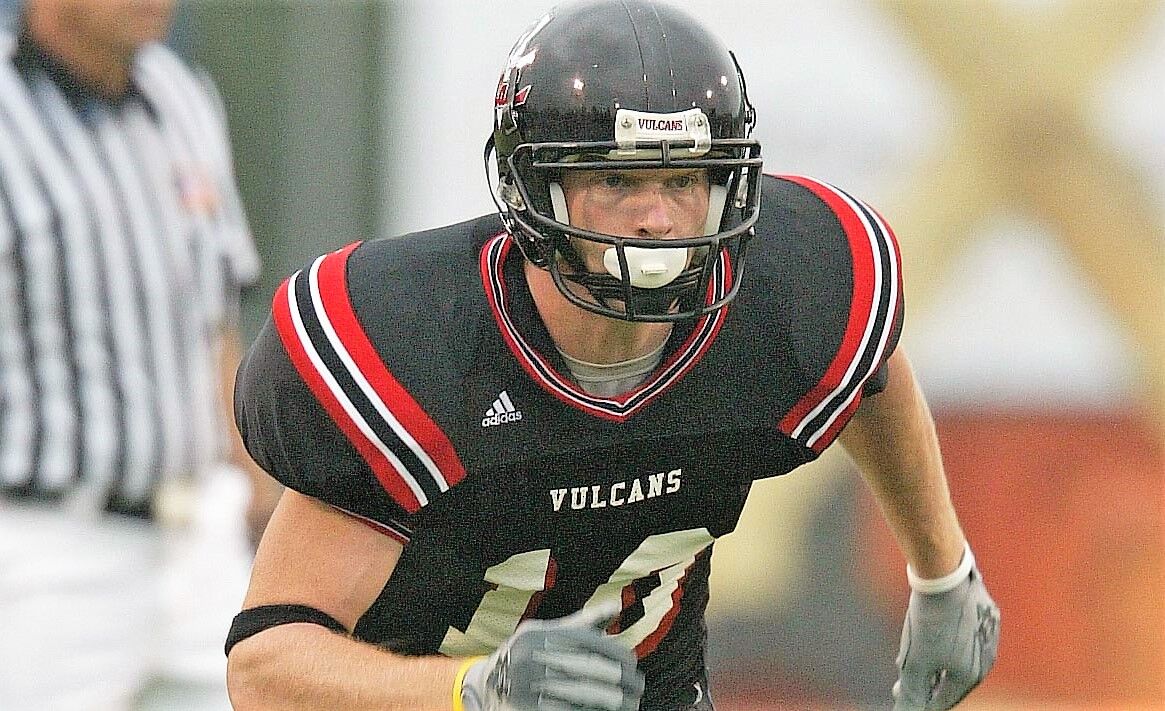 Laurel Highlands graduate Nate Forse is shown during his playing days at California University of Pa. Forse finished his Vulcans career with 148 receptions for 2,068 yards and 15 touchdowns. 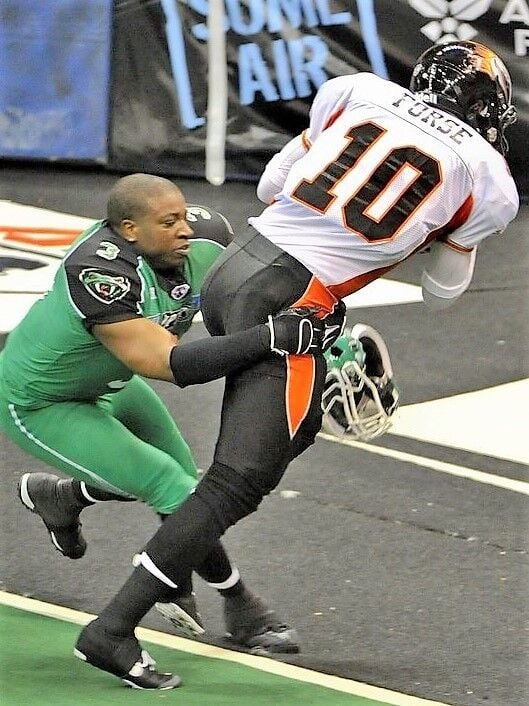 Laurel Highlands and California University of Pa. graduate Nate Forse (10) is shown during his arena football playing days with the Milwaukee Iron. 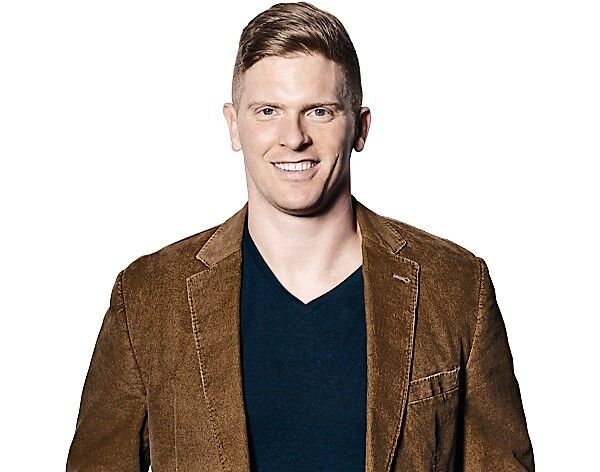 Laurel Highlands graduate Nate Forse is shown during his playing days at California University of Pa. Forse finished his Vulcans career with 148 receptions for 2,068 yards and 15 touchdowns.

Laurel Highlands and California University of Pa. graduate Nate Forse (10) is shown during his arena football playing days with the Milwaukee Iron.

Nate Forse was a force on the football field and basketball court at Laurel Highlands High School and later on the gridiron at California University of Pennsylvania.

Growing up in Hopwood, Forse got an early start in athletics.

“I started playing baseball with Tee Ball at Clark,” Forse recalled. “We won three championships in a row. I then developed a love for basketball and I played soccer in fourth or fifth grade and literally was the worst kid on my soccer team. I wanted to quit, but my dad said you finish what you start. That taught me a powerful lesson for life and for sports.

“I always laugh about only winning six games when I was in high school and when I was at Cal U I only lost six game,” Forse said. “We had talent at LH, but we just couldn’t put it in the win column. I cracked the starting lineup as a sophomore and was a three-year starter.”

“I had a good quarterback in Humbert, one of my good buddies, and I had Bosnic as a sophomore,” Forse said. “The offense really evolved and the coaches trusted me a little more and I steadily improved. We had good receivers like Garrett Brain and Santino Sloboda. We were the big three.”

Jack Buehner was the head coach at LH when Forse was in school.

“Coach Buehner and I had a good player-coach relationship,” Forse said. “He was a guy I looked up to a lot because he played at Penn State.”

At 6-foot-5, 220 pounds, Forse captured all-section honors three years in a row and tallied 976 points in his career for the Mustangs.

“It was a toss up between football and basketball,” Forse said. “Basketball was my first love and I think a lot of people thought I would play basketball in college, but I realized as a sophomore that I had a better shot at playing at a bigger school for football.

“I enjoyed playing basketball for Mark John. He was great. He even came to one of my Arena League football games years later. He was a great guy and I really appreciate his spirit and his love for his old players.”

Forse was on the LH track team and his events were the triple jump and 400 meter run.

“Track was just something I wanted to do to compete and try and get faster,” Forse said. “I didn’t want to just spend time in the weight room during the off-season.”

When Forse graduated from Laurel Highlands in 2002 he sifted through some college scholarship offers.

“I would be lying if I didn’t say I was frustrated,” Forse explained. “Being that we didn’t win many games in football I didn’t have a lot of schools looking at me, but I had my heart set on playing Division-I and thought I was going to get offered a scholarship coming out of high school, but that didn’t come through and I committed to be a preferred walk on at West Virginia.

“I didn’t get many basketball offers, most were Division-III and I wanted to go Division-I for football.”

As a freshman at WVU, Forse caught a touchdown pass in the Blue Gold game and was competing for a wide receiver spot.

“I was promised my scholarship after my first spring game, but that scholarship never came,” Forse said. “This led me to a very dark place because my whole identity and self-worth was wrapped up in my success on the field. I contemplated quitting for two weeks, but decided that transferring schools was the better option.”

He decided to join his old high school teammate Humbert at California University of Pa.

“Jermaine Moye from Rochester also transferred from WVU,” Forse pointed out. “Humbert was in the program, but coach Mike Kellar, the offensive coordinator, was the main reason I wanted to go to Cal. U. The style of offense was perfect for me.”

It was a great situation at Cal as coach John Luckhardt was turning the Vulcans around. During Forse’s three seasons, the Vulcans won 29 of 35 games with a 16-2 PSAC West mark.

Football success was immediate for Forse at Cal U, where he led all receivers with 39 catches for 496 yards and two touchdowns in 2005. The offense averaged a school-record 42.1 points per game that season and the Vulcans won eight games and their first PSAC West title in 21 years. Cal U tied the 1920 team with a school-record 88 points in a victory at Mansfield.

In 2007, Forse caught 59 balls for 804 yards and 10 touchdowns as the Vulcans compiled a 13-1 overall record and earned the team’s first-ever NCAA Division-II playoff appearance. After achieving the program’s first undefeated regular season in 49 years, Cal U won two playoff games and advanced to its first of three straight national semifinal appearances. Forse earned his third all-conference accolade at season’s end.

“I regret we did not make the national title game because we had the team to do it, but that’s football,” Forse said. “You don’t get a second chance in games, and you have to be grateful for what you have and take in the most of every single day. Those are big lessons I’ve learned from football.”

He finished his collegiate career with 148 receptions, 2,068 yards and 15 touchdowns. His career receptions and yards still rank fifth and 10th, respectively, in the school record book. Forse played in the Division-II Cactus Bowl All-Star game after his senior season.

Forse wasn’t drafted or invited to an NFL camp and was living at home selling cars and doing workouts for different teams.

Selling cars was so bad that that he took a job coaching girls basketball at Ringgold High School just to be around sports again. He then coached boys basketball for two seasons. He still wanted to play and he signed with the Arena 2 Green Bay Blizzard in 2009. He earned All-af2 First Team honors with 131 catches for 1,875 yards and 28 touchdowns. His strong performance led to a private workout with the NFL’s Pittsburgh Steelers.

“Trying out with the Steelers was a lot of fun,” Forse said.

Forse went back and played more Arena Football. Forse played from 2010 to 2013 during his career with the Milwaukee Iron, Arizona Rattlers, Orlando Predators and Chicago Rush. Forse caught 199 passes for 2,332 yards and 38 touchdowns in his career.

After selling insurance, Forse Lifestyle Coaching was launched in June of 2013. Over the next seven years Forse built the company up focusing on personal training, group fitness, and corporate wellness. Forse lived in Los Angeles and now resides in Denver.

In 2019 Forse was inducted into the Cal U Sports Hall of Fame.

“Cal U was a huge influence on me and I could not be more grateful for my time there,” Forse stated.

“It’s been a crazy journey,” Forse said. “I didn’t plan most of this stuff, but I’ve been along for the ride and trusted and had faith that it would work out.”

Who do you think won the final presidential debate last week?