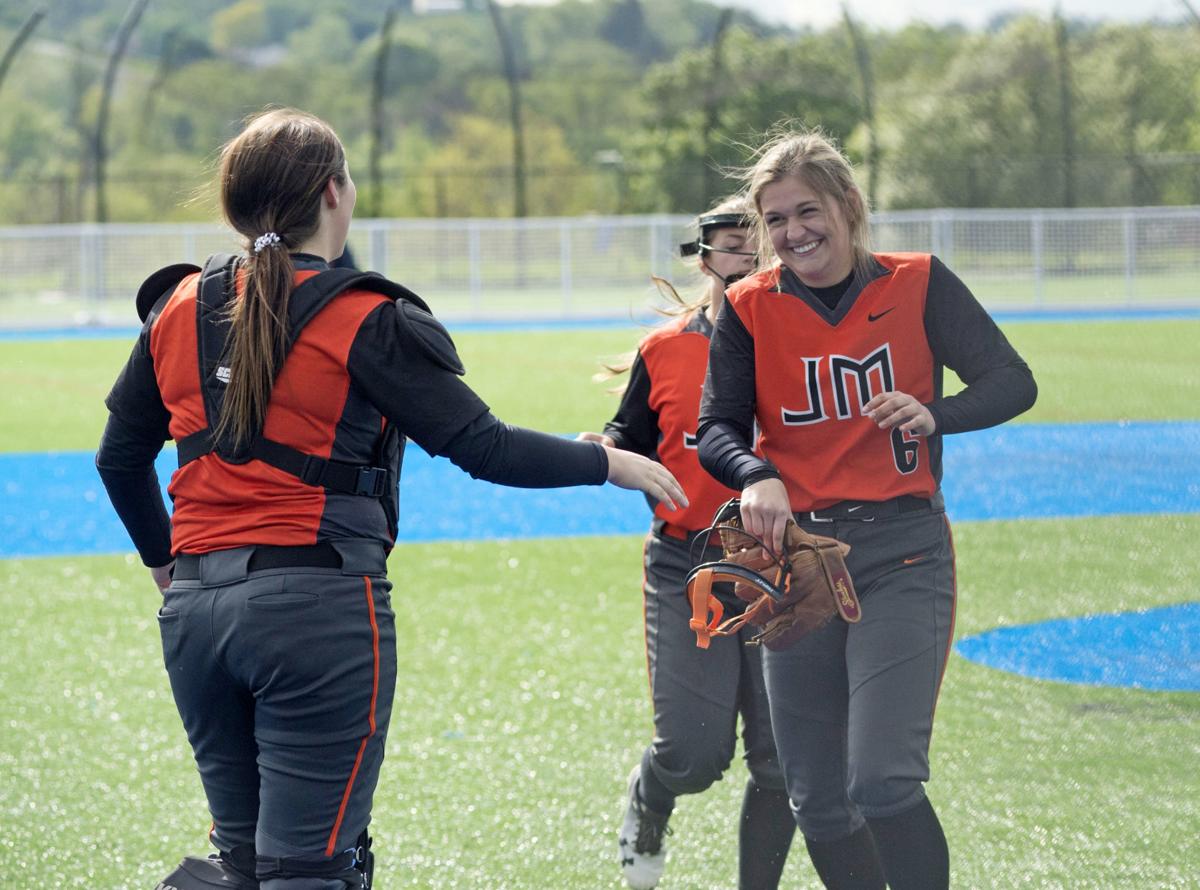 Jefferson-Morgan pitcher Caitlyn Dugan (right) is all smiles as she’s greeted by catcher Autumn Gustovich after the Lady Rockets’ 15-1 win over Rochester in their WPIAL Class A first-round playoff game at Trinity Middle School, May 14, 2019. The Lady Rockets, who reached the semifinals where they lost to West Greene, had high hopes again in 2020 before their season was wiped out by the coronavirus pandemic. (Photo by Celeste Van Kirk) 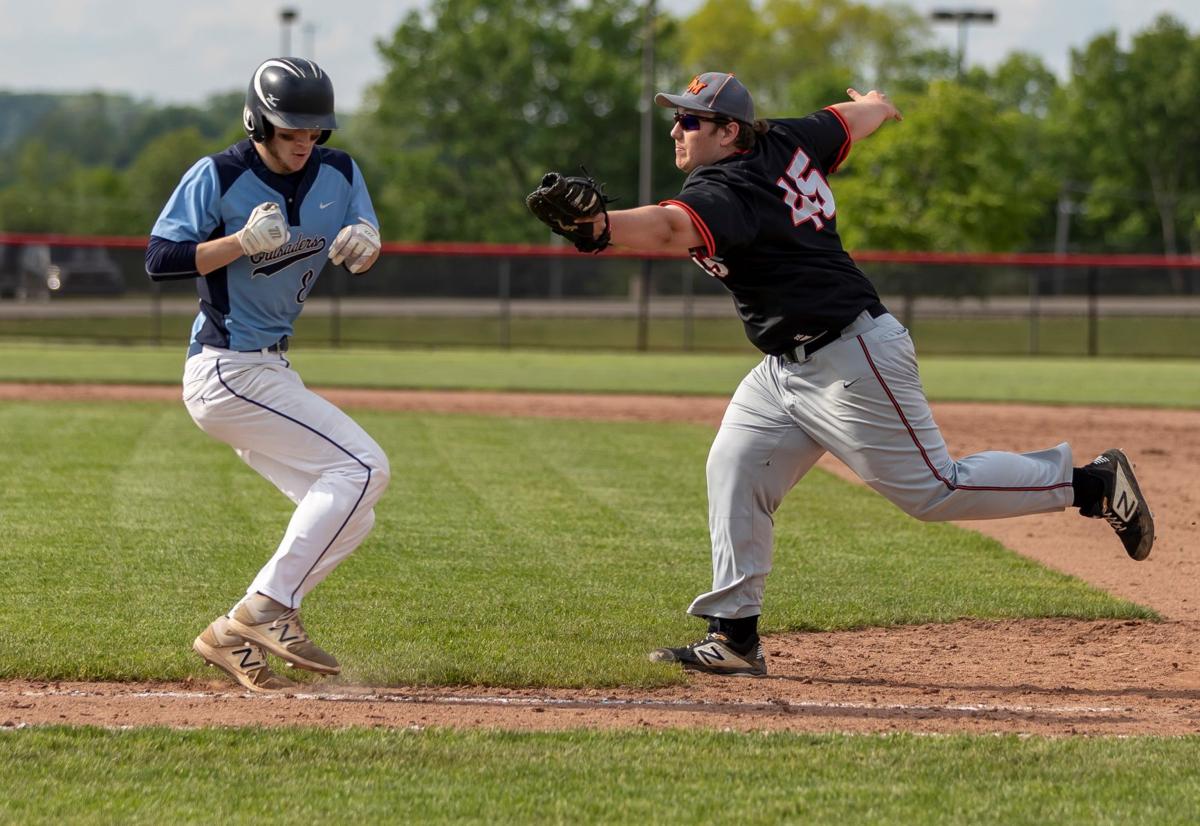 Jefferson-Morgan first baseman Cole Tretinik prepares to tag out Bishop Canevin’s Mike Seitz during a WPIAL Class A first-round playoff game at Boyce-Mayview Field, May 15, 2019. The 3-0 loss wound up being the final game for Tretinik as he and the Rockets’ 2020 season was canceled due to the coronavirus pandemic. (Photo by Darnell Graham)

Jefferson-Morgan pitcher Caitlyn Dugan (right) is all smiles as she’s greeted by catcher Autumn Gustovich after the Lady Rockets’ 15-1 win over Rochester in their WPIAL Class A first-round playoff game at Trinity Middle School, May 14, 2019. The Lady Rockets, who reached the semifinals where they lost to West Greene, had high hopes again in 2020 before their season was wiped out by the coronavirus pandemic. (Photo by Celeste Van Kirk)

Jefferson-Morgan first baseman Cole Tretinik prepares to tag out Bishop Canevin’s Mike Seitz during a WPIAL Class A first-round playoff game at Boyce-Mayview Field, May 15, 2019. The 3-0 loss wound up being the final game for Tretinik as he and the Rockets’ 2020 season was canceled due to the coronavirus pandemic. (Photo by Darnell Graham)

The following is one in a series of stories featuring local high schools which lost their spring sports seasons due to the coronavirus pandemic.

Jefferson-Morgan’s softball team marched to the final four in the WPIAL playoffs last year and came within a 3-2 loss to Leechburg of qualifying for the PIAA tournament.

Coach Rich Rush’s Lady Rockets, led by senior pitcher Caitlyn Dugan, were looking to match that feat and possibly surpass it in 2020.

On the baseball diamond, J-M’s baseball team, guided by veteran coach John Curtis, was seeking to reach the postseason for the third time in four years.

Then the coronavirus pandemic took all those aspirations away.

“I don’t think anyone really expected it to be what it is today,” Jefferson-Morgan athletic director Scott Moore said when assessing the COVID-19 situation. “I thought six or seven weeks maybe, but obviously that wasn’t the case.

“The Jefferson-Morgan community is pretty close-knit. I see these kids a lot, the seniors, especially the ones in spring sports during that time because they’re the ones that really got cheated out of everything. I saw Caitlyn, I saw Autumn (Gustovich), those girls in particular. It was so hard. Your heart breaks for Caitlyn. That kid’s been through so much.

“That group of girls really had an outstanding chance to make some noise this year. We had a lot of those girls back and we were real excited about that. I don’t want to take anything away from the boys because they made the playoffs last year and they were probably going to make it again this year.”

Moore recalled how the postponement and then the cancellation of the spring season evolved.

“It was right after the state wrestling tournament, we were out at Hershey for that, then when we came back it was just the following week,” Moore said. “We’d just started softball and the kids were real excited. I think we got a first scrimmage in and then that following weekend we got the word of everything being canceled. I talked to Rich, I talked to John. We just had to wait ... and then we just kept waiting and it all ended.”

Even the future is in doubt, as Moore pointed out.

“Something like that happens, it’s so bizarre,” he said. “I’m still worried about this coming year. I’m worried about football, golf and volleyball.

“We’re having meetings right now. We’re taking every precaution that we can to make things safe for our kids. We started our summer programs and we’re very diligent on what we’re doing.”

“We had gotten in one scrimmage and then everything happened so fast,” Rush said. “It went from it was a worry to no more school.

“After the first two weeks it didn’t take too long after that where I felt school was probably done for the year, and I figured if school was done, sports was done.”

Jefferson-Morgan won the WPIAL championship in 2015 and Rush felt a second title wasn’t out of the question this year.

“Honestly, I thought we had our strongest team since ‘15, top to bottom,” Rush said. “I felt we had one of the top three or four teams in the WPIAL. Cait was my warrior pitcher who was finally coming around and peaking heading into her senior season. I think she had put it all together and it sort of clicked. She was firing on all cylinders.”

Gustovich behind the plate gave J-M one of the best batteries in all of Class A.

“It would’ve been Autumn’s third year of catching so she was pretty experienced back there,” Rush noted.

Wright had taken over the hot corner.

“Payton had been through a lot of injuries but she was finally healthy going into this year and was going to be my third baseman,” Rush said.

The Lady Rockets had some talented underclassmen, including Jasmine Demaske, who sparkled as a freshman shortstop last year, and junior Abby Ankrom.

Rush still has a positive outlook for 2021.

“We’ll still be strong,” he said. “We’re going to drop down a little bit, obviously, when you lose a four-year pitcher like Caitlyn. But we’ll have a nice team. We’ll contend for a playoff spot. Jasmine will probably take over as my pitcher next year and I’ll probably have one freshman who’ll do some pitching as well. We have a few nice freshmen coming up.

“Hopefully, by the time we hit next spring we’ll be operating normally again.”

Curtis was coming off a half century of coaching baseball and was heading into his 37th year at Jefferson-Morgan and 51st overall.

If there was one good thing that came out of the cancellation of the season it’s that it made the popular coach put off thoughts of calling it a career on the baseball diamond.

“This put a stop to any retirement plans I might have had from baseball, because I can’t stand this,” Curtis said with a laugh. “I miss it so much. I’d even go up to the ballfield and work in the shed and clean it up. After awhile they said you can’t even do that anymore.

“I really missed it and I know my coaches did, too.”

The Rockets had two seniors, Cole Cole Tretinik and Jared Murray, plus a slew of talented underclassmen.

“This was Jared’s first year out for baseball,” Curtis said. “He had played basketball all throughout his high school career.

“Cole was my first baseman who was a returning starter from last year. He was a big kid, about 6-1, 280 pounds. He was a golfer, too. He had good feet around the bag at first base.”

Tretinik had put in a lot of time preparing for his final year of baseball.

“We worked hard up at the rec center all winter,” Curtis said. “I was really disappointed that he didn’t get the chance to play. I thought his bat was really going to come around this year and that he was going to help us with a lot of RBIs.”

Curtis looked back on the way the season came to and end.

“We were coming to the gym, we had some practices, we got in a scrimmage with Charleroi and we looked pretty good,” said Curtis, who could sense the situation was getting serious. “I kind of did but I didn’t know to what extent. I thought well, we’ll probably still play. It was Friday the 13th and I was subbing that day. Scott Moore comes in and says everything is off.

“We had a second scrimmage scheduled against Leechburg the following Tuesday and I had some things I wanted to correct following the first scrimmage, but that was called off. I’m waiting, waiting, waiting ... when are we going to get back? It just never happened.”

Even a coach who’s been around more than five decades was caught off guard by the pandemic.

“This is a first-time thing for everybody, me included,” Curtis said. “It was a shock.

“My juniors missed a big year this year and you hate to see that. We’re pretty well loaded with guys like Bryce Bedilion, Kyle Clayton, Ayden Pratt, Logan Rhodes and Owen Maddich, who were all juniors this year, and Liam Ankrom and Easton Hanko, who were both sophomores. This would’ve been a good year for that group to start growing into their shoes, and give us a really good year next year.

“I’m just sad they had to miss the high school season.”

But Curtis is pleased now to see some of his players playing in summer leagues and travel leagues.

“They’re getting some time now, and I’m just happy to be able to go back to the ballfield again. It’s awesome being back out there.”

Curtis then turned his attention to fall for a moment and pondered about the other sport he coaches at Jefferson-Morgan.

“Hopefully, we’re going to have a golf season,” he said.