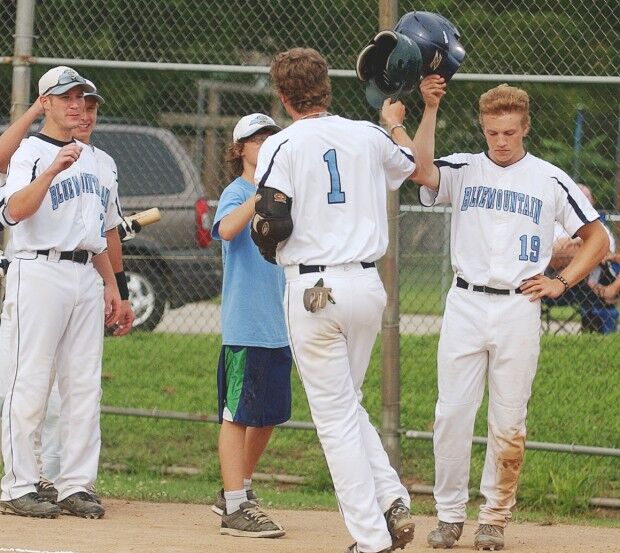 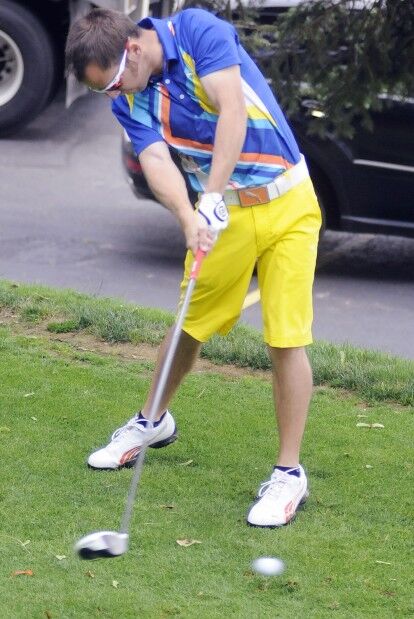 Santino Marchitello hits a drive off the first tee at Uniontown Country Club in the second round of the 2013 Fayette County Open on Aug. 2, 2013. Marchitello shot a 6-under 65 to trail leader Jeremy Enslen by four strokes heading into the third round.

Santino Marchitello hits a drive off the first tee at Uniontown Country Club in the second round of the 2013 Fayette County Open on Aug. 2, 2013. Marchitello shot a 6-under 65 to trail leader Jeremy Enslen by four strokes heading into the third round.

2019 — Harison Laskey retained the top spot on the Fayette County Open leaderboard, but a pair of former champions were nipping at his heels after the second round. The defending champion shot a 2-over 73 at Uniontown Country Club for a two-day total of 1-under 141. Jeremy Enslen gained four shots by posting a 2-under 69 for a two-round total of 142. Santino Marchitello also sits at 142 after shooting a 1-over 72 in the second round. Also in the mix is another former champion with Pat Calvaresi alone in fourth place, trailing by three strokes with a 144.

2018 — Harison Laskey posted 5-under 66 for the first-round lead of the 30th Fayette County Open at Pleasant Valley Golf Club. Albert Gallatin senior Aaron Fetzner finished at 3-under 68, as did Marcus Oliverio, playing in his first county golf championship. Defending champion Jeremy Enslen was alone in fourth place with a 2-under 69. Pat Calvaresi was fifth with a 70, while Fred David, John Lenkey, Santino Marchitello and Mike Revak all posted an even-par 71.

2018 — Carmichaels broke a 1-1 tie with seven runs in the bottom of the sixth to claim its third-straight Fayette County Baseball League championship with an 8-1 victory at Mill Run in Game 3 of the best-of-5 series. The title was the Copperheads’ 13th overall. The Millers fell to Carmichaels in the last three finals. Ryan Minteer, the finals MVP, pitched a perfect seventh inning in relief of starter Nate Torbich with two strikeouts for the victory. Torbich pitched 5.1 innings, allowing one run on two hits with eight strikeouts and three walks.

2017 — Carmichaels jumped out to a 4-0 lead in the first and held on for a 6-5 victory over Mill Run in Game 2 of the Fayette County Baseball League championship series. The Copperheads (21-3) are now one victory away from their second straight FCBL title. Mill Run trailed 6-0 after three innings, but battled back with one in the third and four in the sixth, including Tanner Orndorff’s two-run single and Garrett Brooks’ bases-loaded walk. Winning pitcher Joby Lapkowicz pitched 5.1 innings, allowing five runs on seven hits and three walks. Ryan Minteer pitched 1.2 scoreless innings, including a perfect seventh, to pick up the save. Jimmy Malone pitched all seven innings, allowing six runs on 13 hits.

2016 — Carmichaels rallied from a one-run deficit with two runs in the bottom of the eighth to rally for a 5-4 victory over visiting Mill Run in the Game 3 to sweep the Fayette County Baseball League best-of-5 championship series. Tyler Delval walked to lead off the eighth and Eric Holt and Joby Lapkowicz walked with one out. Clay Roman drove Delval home with the winning run. Nate Torbich went the distance for the win, allowing four runs on nine hits. Mill Run’s Garrett Brooks had a no-decision, going seven innings and allowed three runs on four hits. Corey Fogle took the loss.

2016 — The Fairchance Little League softball team’s season came to an end with a 3-2 loss to DuBois at Fairchance Community Park. Shayla Reynolds had three walks, two stolen bases and a run scored for Fairchance. Teammate Kyleigh Polish-Angelo singled and scored.

2015 — Mike Finsterle was a first-time golfer in the Fayette County Open and he left Duck Hollow Golf Club Sunday as a first-time champion. Finsterle shot 7-over 80 in the second round of the seniors championship for a two-round total of 10-over 152 and a two-stroke advantage over John Kingora, who also shot 80. Dave Smithburger shot 80 to finish third with 155. Bernie Wydo had one of the better rounds on the final day with a 3-over 75 to finish fourth at 157. Roger Rantovich rounded out the top five with a 158 (76-82).

2015 — Jeremy Enslen gained separation from co-leader Pete Dzambo III on the third hole of Duck Hollow Golf Club with a birdie-2 and that’s all he needed to repeat as the Fayette County Open champion with a four-round total of 2-over 286. Enslen closed with a 1-under 71 to win his fourth title in the past six years. Dzambo finished with a four-day total of 10-over 294. Mercyhurst College-bound Harison Laskey shot 77 to move into third place with a 299. Mike Revak, a former champion with three second-place finishes, placed fourth after he carded 78 for a 300. Aaron Gizzi shot 72 and finished fifth in his first County Open with a 302.

2015 — Rachel Rohanna birdied two of her final four holes for a 1-over 73 in the final round to finish tied for 22nd place at the PHC Classic in Milwaukee, Wisc. The Waynesburg Central graduate had a three-day total of 5-over 221 for earnings of $1,012.

2014 — Two-time champion Jeremy Enslen maintained a comfortable lead in the 26th annual Fayette County Open after shooting 2-over 74 in the third round on his home course at Duck Hollow Golf Club. Mason Fordyce shot even-par 72 to move six strokes behind Enslen into second place. Pat Calvaresi and Santino Marchitello were tied in third place at 8-over 222. Kingora was alone in fifth place at 223.

2014 — Rachel Rohanna carded a bogey-free, 4-under 67 in the second round of the Symetra Tour Credit Union Classic presented by Wegmans in Syracuse, N.Y. Rohanna was tied for first place with Veronica Felibert at 6-under 136 entering the third and final round.

2014 — Former champion Bernie Wydo shot a 1-over 73 at Duck Hollow Golf Club for the early lead in the two-round Fayette County Open seniors tournament. Steve Superick, playing in his first seniors tournament, is a shot off the pace in second place, while defending champion John Kingora is alone in third place after shooting a 4-over 76. Ed Jobes (79), Dave Smithburger (80), and Tom Battaglia (81) round out the top six.

2013 — Jeremy Enslen shot an even-par 71 at Uniontown Country Club in the second round of the Fayette County Open to remain atop the leaderboard with a two-round total of 5-under 137. Santino Marchitello shot his best round to date, a bogey-free, 6-under 65 to trail by four strokes with a two-day total of 141 heading into the third round at Springdale Golf Club. Laurel Highlands junior Harison Laskey carded another 2-over 73 for a total of 146 to trail by nine strokes with 36 holes to play. Ron Jones, who had an eagle, and John Kingora were tied for fourth at 147.

2012 — Pete Dzambo III shot a bogey-free, 5-under 66 at Pleasant Valley County Club in the opening round of the Fayette County Open. Dzambo held a three-stroke lead over defending champion Jeremy Enslen and first-year player Cam Booth after the first round of the four-round championship.

2009 — Mitch’s Bail Bonds advanced to the FCBL semifinals with a 6-3 victory over visiting Bud Murphy’s. A.J. Kerr’s sacrifice fly gave Mitch’s a 3-2 lead in the third. Matt Dishong was the winning pitcher.

2009 — Mill Run advanced to the FCBL semifinals with a 6-2 victory over visiting Hopwood. Winning pitcher Travis Henry limited Hopwood to seven hits and struck out four.

2006 — Mario’s cruised to a 10-1 victory over visiting Wana B Heros in the opening game of their Fayette County Baseball League best-of-5 semifinal playoff series. Ryan Robowski’s two-run single capped a three-run opening outburst for Mario’s. Chris McManus and Scott VanSickle both hit solo home runs. Winning pitcher Todd Dunham allowed one earned run on five hits with seven strikeouts and two walks in six innings. Jim Kubina struck out one in the seventh for the save. Mark Edenfield had a double and two RBI in the win.

2005 — Jake Peavy pitched effectively for seven innings and helped San Diego’s slumping offense by driving in his first run this season, leading the Padres past the Pittsburgh Pirates, 11-3, for only their second victory in 14 games.

2005 — Scott VanSickle’s walk-off single lifted Mario’s to a 9-8 victory over the Redd Dawgs to advance to the Fayette County Baseball League semifinals. The Redd Dawgs’ Chris McManus finished with a pair of three-run home runs and a run-scoring single.

2005 — Uniontown lost in the first round of the Pennsylvania American Legion State Tournament to Nor-Gwyn, 4-1. Uniontown (31-9) dropped into the loser’s bracket against Bradford. Nate Fike allowed just one earned run in the complete-game loss. Josh Guittap drove in Uniontown’s lone run with a sacrifice fly.

2004 — Mario’s rallied from a 5-1 deficit for a 6-5 victory on Ron Dellarose’s walk-off home run to take a 2-0 lead in the Fayette County Baseball League best-of-5 semifinals against Mill Run. Jim Kubina went the distance for the win. Dan Gratchic had a three-run, inside-the-par home run for Mill Run. Bill Rouse belted a three-run home run for Mario’s.

2004 — Waynesburg Central graduate Coleman Scott added another title to his illustrious junior career and Connellsville’s Jarrod King also earned a spot atop the medal podium in the 2004 Cadet & Junior Greco-Roman/Freestyle Nationals held in Fargo, N.D. from July 24-30. Scott, a three-time state champion for the Raiders, defeated Jayson Ness, of Bloomington, Minn., 9-1, to repeat as junior national champion at 125 pounds. The Oklahoma State University recruit was the 2002 Cadet Greco-Roman national champion and a 2002 Cadet Freestyle All-American. King defeated Louis Socier, of Bay City, Mich., 8-3 to win the title at 171 pounds. The University of Oklahoma recruit was the 2004 High School Nationals runner-up and a 2002 Junior Greco-Roman All-American. King was a state champion his senior and junior years. Connellsville’s Steven Bell earned all-American honors by finishing eighth, losing to Reece Humphrey from Indiana by a technical fall, 12-1.

2004 — Bud Murphy’s shut out Rostraver, 6-0, to even the Fayette County Baseball League best-of-5 semifinal series at 1-1. Mark Riggin had three hits for Bud’s. Dale Eutsey was the winning pitcher.

2003 — Brian Galica and Brandon Katzeff, both recent graduates of Laurel Highlands, stood atop the Fayette County Open leaderboard after the third round at Duck Hollow Golf Club. Galica, who golfed at Indiana (Pa.), led with a three-round total of 219, while Katzeff, who was entering his freshman year at Marshall, was two strokes back in second at 221. Defending champion Pat Calvaresi was four strokes back in third place and John Kingora, a seven-time champion, was fourth with 224.

2002 — Bud Murphy’s took a 2-0 lead in the Fayette County Baseball League best-of-5 semifinals with a 2-1 win in eight innings over Masontown. Winning pitcher Nick Damico won his second playoff game with seven strikeouts and two walks in eight innings. Damico pitched out of bases-loaded jam in the bottom of the eighth. Josh Delawder drove in the winning run with a sacrifice fly in the eighth.