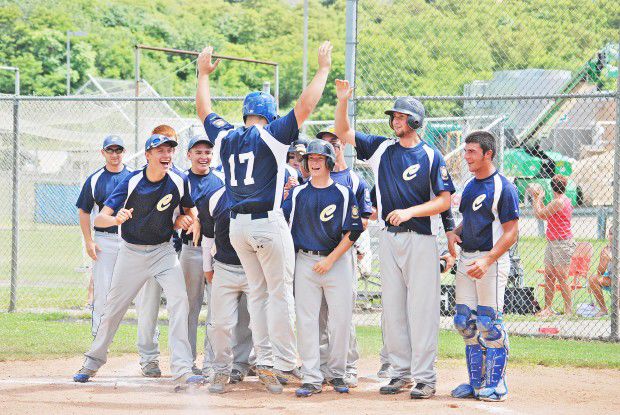 Connellsville’s Tyler Henry leaps onto home plate surrounded by his teammates after hitting a grand slam in the first inning in the Fayette American Legion Baseball League playoff game against visiting Uniontown at Connellsville on July 14, 2013.. Connellsville held on to defeat Uniontown, 12-10. 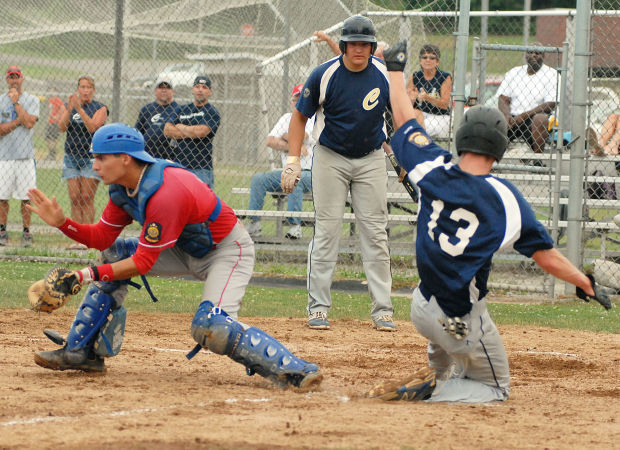 Uniontown catcher Zack Stashick waits for the throw as Connellsville’s Brock Bonadio slides across the plate for the second run of Game 2 of the Fayette American Legion Baseball League championship series played at Connellsville Area High School on July 14, 2014. Connellsville held off Uniontown for a 3-2 victory.

Connellsville’s Tyler Henry leaps onto home plate surrounded by his teammates after hitting a grand slam in the first inning in the Fayette American Legion Baseball League playoff game against visiting Uniontown at Connellsville on July 14, 2013.. Connellsville held on to defeat Uniontown, 12-10.

Uniontown catcher Zack Stashick waits for the throw as Connellsville’s Brock Bonadio slides across the plate for the second run of Game 2 of the Fayette American Legion Baseball League championship series played at Connellsville Area High School on July 14, 2014. Connellsville held off Uniontown for a 3-2 victory.

2019 — Caleb Dillon held visiting Belle Vernon to just three hits and drove in the game’s only run as Connellsville held on for a 1-0 Fayette County American Legion Baseball League playoff game victory. Connellsville opted not to play Uniontown later in the day in the finals, so Uniontown, the regular season champion, was declared the tournament champ. The game was error-free with a combined seven hits and eight walks. Cade Warrick walked with two outs in the bottom of the fourth inning to start Connellsville’s game-winning rally. Cole Shearer walked, moving courtesy runner Luke Warrick to second. Dillon then ripped a single up the middle. Warrick’s back-door slide into the plate avoided the sweep tag of Belle Vernon catcher David Szerszen for the lone run of the game.

2018 — Belle Vernon defeated Farmington, 6-2, to advance to the Fayette County American Legion Baseball League championship against Uniontown and qualify for the regional tournament. The title game against Uniontown was cancelled, though, due to a lack of players for Belle Vernon. Winning pitcher Cory Fleming scattered two hits with seven strikeouts in six innings.

2016 — Rachel Rohanna opened the Marathon Classic presented by Owens Corning and O-I with a 2-under 69. The Waynesburg Central graduate was in a 16-way tie in 16th place entering the second round.

2015 — Mitch’s Bail Bonds scored all five of its runs without a base hit for 5-3 win over Mill Run in a Fayette County Baseball League game. Winning pitcher Brian Fisher allowed three runs on six hits with eight strikeouts and two walks. Grant Wortman hit a solo home run and Garrett Brooks added a double and triple for Mill Run.

2015 — Pittsburgh’s Andrew McCutchen hit a home run, but it wasn’t enough to keep the National League from losing 6-3 to the American League in the MLB All-Star Game.

2014 — Connellsville scored early and then, behind the relief pitching of Ty Henry, held on for a precarious 3-2 victory over visiting Uniontown to sweep the Fayette American Legion Baseball League best-of-3 championship series. Guiseppe Schiano hit a solo home run to draw Uniontown to 3-2. Connellsville entered the regional tournament with an overall record of 37-8. Uniontown was 24-4 with two of the losses coming in the championship series.

2014 — Rachel Rohanna shot a 4-under 67 in the Monday qualifier at Sylvania Country Club to grab one of the two qualifier berths into the LPGA Marathon Classic presented by Owens Corning & O-I.

2013 — Belle Vernon made the most of a California defensive mistake in the sixth inning for a 7-4 victory and advance in the Fayette County American Legion Baseball League double-elimination playoffs. Winning pitcher Dylan Pietrantoni tossed a complete game, allowing four runs on 12 hits with 11 strikeouts and four walks.

2013 — Rachel Rohanna was back on the job on the Symetra Tour. The newlywed Mrs. Virgili shot a 2-over 73 in the final round of the Credit Union Challenge at Capital Hills at Albany in Albany, N.Y., to earn $289. Rohanna finished with a three-round total of 5-over 218 and a tie for 68th.

2009 — Greg Welsh was solid in the final three innings to save Connellsville’s 7-6 win over Uniontown to wrap up the Fayette County American Legion Baseball League championship series, 2-1. Sam Beucher hit a three-run home run for Connellsville.

2009 — Dan Thomas walked with the bases loaded to drive in Tim Madar to lift Mitch’s Bail Bonds to a 4-3 FCBL victory over Watson & Sons in eight innings. Brian Harewicz pitched a complete game, striking out eight and walking four in the win. Mitch’s Bail Bonds rallied from a 3-1 deficit with a single runs in the sixth and seventh innings.

2008 — Potter’s Clubhouse led 4-3 after three innings, but California rallied for seven runs in the top of the fourth inning and six more in the fifth for a 16-5 Fayette County Baseball League win. Jason Britton finished with three hits and three RBI and Jon Selby had a double, single and three RBI in the win. Teammate Rob Galis went 2-for-3 with 2 RBI. Aaron Brest pitched five innings for the win with seven strikeouts and seven walks.

2008 — With California trailing 4-1 in the third inning, Jeff Tarley hit a grand slam to give California a 5-4 lead on its way to a 10-5 victory over visiting Uniontown in Game 2 of a semifinal series to force a final game in the Fayette County American Legion Baseball League semifinals. Tarley was 4-for-5 with two singles, a double and home run, scored four runs and drove in five. Matt Hartman tossed a complete game for the win, allowing five runs on six hits with seven strikeouts and six walks. Ethan Mildren hit a solo home run for Uniontown.

2007 — Uniontown cruised to a 16-1 win at Belle Vernon to sweep the best-of-3 series and advance to the Fayette American Legion Baseball League championship. Nathan Fike had a bases-loaded triple in the win. Brett King’s solo home run accounted for Belle Vernon’s run.

2007 — Chris McManus had a busy day with a grand slam, two doubles, two singles and his first win on the mound as Blaney Farms swept a Fayette County Baseball League doubleheader, 7-0 and 22-6, over California. Scott VanSickle had a double, single and three RBI, and McManus went 3-for-4, including two doubles, in the opening-game win. Winning pitcher Chris Brunson (4-1) went the distance with three strikeouts and a walk. McManus blasted a grand slam and Shayne Busti added a solo home run in the second game. McManus (1-0) worked two innings with no runs, one hit and two strikeouts for the win. VanSickle went 3-for-6 with three RBI and Jason Greene was 3-for-5 with four runs scored in the nightcap. Busti was also solid at the plate in the second game with a double and three singles.

2007 — Jeff Francoeur hit a bases-loaded single with two outs in the ninth inning, giving the Atlanta Braves a 5-4 victory over the Pittsburgh Pirates.

2006 — Connellsville pounded out 19 hits and survived a rally from visiting Charleroi for a 14-7 win to even the Fayette County American Legion Baseball League best-of-3 playoff series. Chris Chacko hit a solo home run for Charleroi. Andy Schleihauf and Tyler Onusko both drove in three runs for Connellsville, and Josh Coffman and and Alex Kaper drove in two each. Dave Sumner had four hits in the win. Bobby Fulton came on in the sixth inning for the win.

2006 — Matt George scored the game-winning run in Uniontown’s 12-8 win over Carmichaels to advance to the Fayette County American Legion Baseball League championship. Carmichaels rallied with five runs in the bottom of the eighth inning to tie the game at 8-8.

2006 — Jason Bay drove in two runs and Jose Bautista homered among his three hits, helping the Pittsburgh Pirates to a 7-4 victory over the slumping Washington Nationals.

2005 — Bob Madison went 4-for-4 and earned the save as Uniontown completed its sweep of Charleroi in the Fayette American Legion Baseball League semifinals with a 9-8 victory. Nick Midlik had a key bases-loaded triple for Uniontown.

2005 — Mark Prior allowed two hits in eight innings and struck out 10 as the Chicago Cubs beat the Pittsburgh Pirates, 5-1.

2004 — Uniontown opened the Fayette American Legion semifinals with an 8-2 win over Connellsville. Bob Madison (8-0) went the distance for the win, allowing nine hits with five strikeouts and two walks, and added an RBI single. Brennan Dayton led the Uniontown offense with three hits and three RBI, and Paul Metz delivered a lead-off home run in the seventh inning to spark a four-run rally.

2004 — Tim Rastettler’s two-run, walk-off single lifted Carmichaels to a 10-9 win over visiting Colonial 3 in the first game of the Fayette American Legion best-of-3 semifinals series. Jeff Lapkowicz scored the tying run from third base. Jono Menhart came around from second and beat the throw with a feet-first slide at the plate. Drew Denham pitched five innings in relief for the win, scattering four hits with no strikeouts and one walk. Menhart also blasted a solo home run. Buck Erdely finished with two singles, a double and home run for Colonial 3.

2004 — Carmichaels stormed back from a 2-0 deficit to defeat visiting Connellsville, 14-2, for a Fayette County Baseball League victory in five innings. Brian Hilbert earned the win, allowing three hits with three strikeouts and no walks. Brad Baker had three singles, and George Taylor had a double and single for Carmichaels. Teammate Duane Dupont doubled and singled in the win.

2003 — Andy Mazur had a no-hitter through five innings in Carmichaels’ 7-1 win over California in the opening game of the first round of the Fayette American Legion Baseball League best-of-3 playoffs. Mazur scattered four hits in the win with five strikeouts and two walks. Jared Lapkowicz hit a two-run home run and Shayne Busti had a two-run double in the win.

2002 — Brian Shipley hit a grand slam and double and had five RBI to lead Bud Murphy’s to a 6-4 win over visiting Mill Run in a Fayette County Baseball League game. Tony Rose was the winning pitcher for Bud Murphy’s (20-3) and Matt Basinger picked up the last two outs for the save. Dan Gratchic belted a three-run home run for Mill Run.