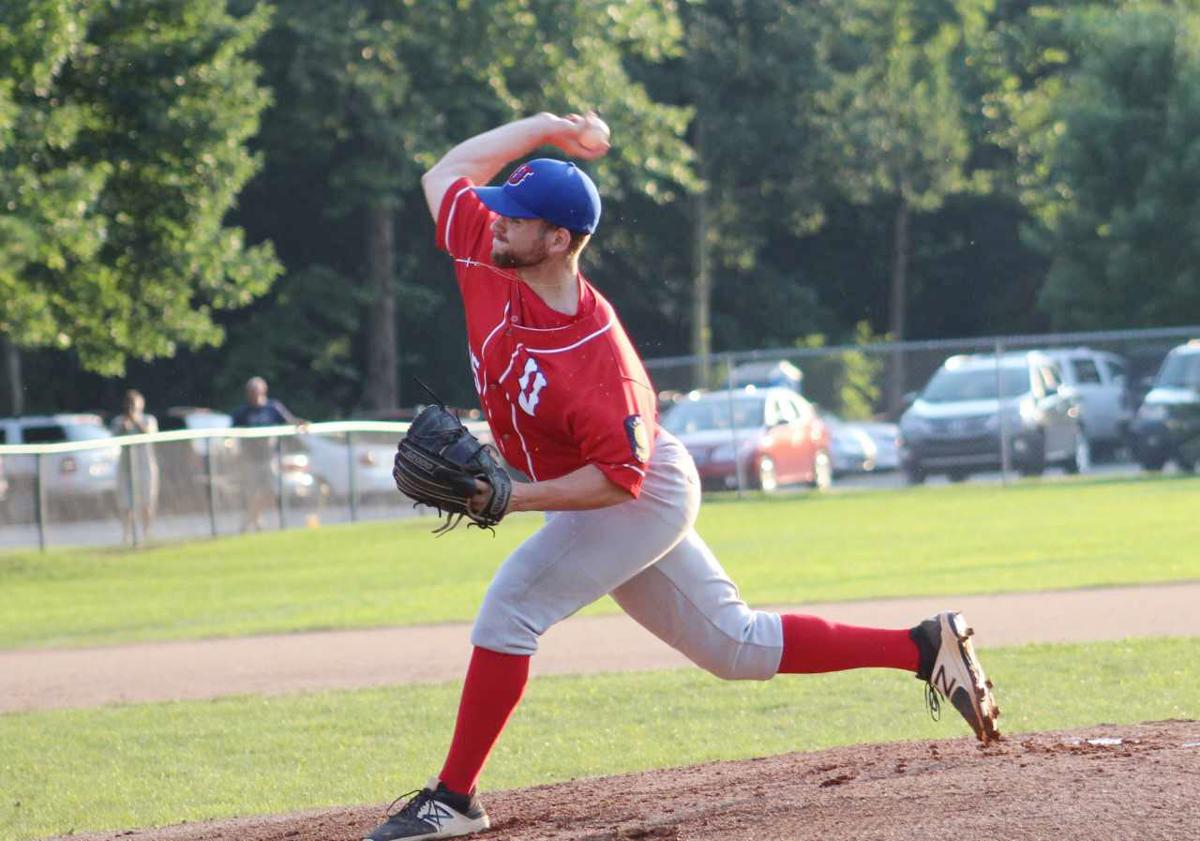 Uniontown starting pitcher Luke Paull fires a pitch in the first inning of a Pennsylvania American Legion Baseball Region 6 championship tournament winner’s bracket game against Blackhawk at Hutchinson Field on July 16, 2017. Paull allowed six hits, struck out 11 and didn’t walk a batter as Uniontown advanced in the winner’s bracket with a 6-3 victory. 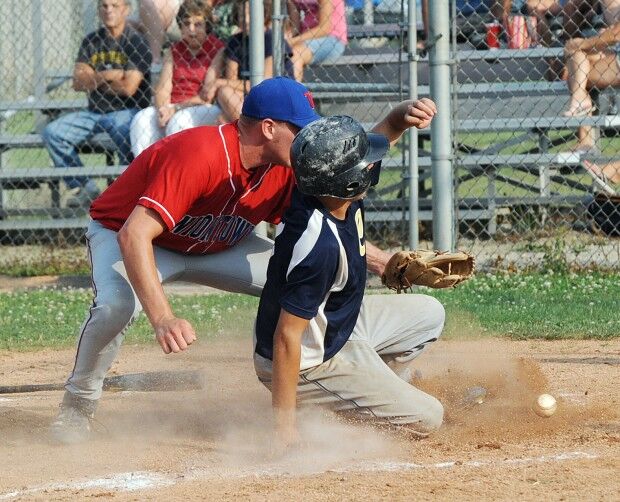 Uniontown starting pitcher Luke Paull fires a pitch in the first inning of a Pennsylvania American Legion Baseball Region 6 championship tournament winner’s bracket game against Blackhawk at Hutchinson Field on July 16, 2017. Paull allowed six hits, struck out 11 and didn’t walk a batter as Uniontown advanced in the winner’s bracket with a 6-3 victory.

2018 — Elizabeth Forward senior Angus McHolme said he was unable to consistently hit off the tee in the first round of the U.S. Junior Amateur and, as a consequence, finished the opening day at 7-over 78 at Baltusrol Golf Club, Upper course. McHolme was tied for 118th place with only the low 64 scores advancing to match play.

2018 — Mill Run, aided by a couple of errors, scored seven runs in the bottom of the fourth inning on its way to a 10-4 Fayette County Baseball League victory over visiting Mitch’s Bail Bonds. Mill Run sent 11 batters to the plate in the bottom of the fourth inning. Chris Firestone and Cole Shearer both had run-scoring doubles in the inning. Cade Warrick went 3-for-3 for the Millers. Alan VanSickle came on with one out in the fourth inning to earn the win, allowing one hit with with three walks and four strikeouts.

2017 — Ambridge-Baden advanced in the winner’s bracket of the Pennsylvania American Legion Baseball Region 6 championship tournament with a 12-0 victory over Colonial 3 at Hutchinson Field. Colonial 3 dropped to the loser’s bracket to play Robinson-Montour.

2017 — The Connellsville 10-12 Little League All-Stars dropped into the loser’s bracket in the Section 2 tournament with an 18-2 loss to North Allegheny. Beau Bigam hit a solo home run for Connellsville.

2017 — Joe Havrilak and Tyler Godwin both homered and doubled as Carmichaels cruised past host Little Joeys Pizza, 15-1, in five innings in a FCBL game. Havrilak drove in four runs and Godwin had three RBI. Winning pitcher Ryan Minteer allowed one run in four innings with three strikeouts and two walks.

2016 — Uniontown’s Luke Paull outdueled Hopewell’s Tim Sabo for a 2-0 victory in the opening round of the Region 6 American Legion Baseball Tournament at Chippewa Park. Paull (8-2) held Hopewell to five hits, struck out 11 and walked one.

2015 — Mitch’s Bail Bonds (15-2) scored five runs in the third inning for a 6-2 win over Economy Electric in a Fayette County Baseball League game. Steve McCaw finished with two hits and an RBI in the win. Travis Sanner went the distance for the win, allowing two runs on two hits with nine strikeouts and five walks.

2015 — Rachel Rohanna shot a 1-over 73 in the first round of the inaugural Toyota Danielle Downey Classic.

2014 — Carmichaels won its 39th-straight Fayette County Baseball League game with an 11-0 victory over New York Pizza. The Copperheads improved to 16-0. Brian Resnik (3-0) allowed two hits with five strikeouts and two walks in five innings for the win. J. Jay Paskert pitched a scoreless sixth with a strikeout, while Joby Lapkowicz struck out the side in the seventh inning. Ken Musko and Ed Dutkewycz had New York Pizza’s hits.

2013 — Rain in the afternoon made playing conditions on Connellsville’s high school field unplayable, leading to the postponement of the Fayette American League Baseball championship between Uniontown and Connellsville for 24 hours.

2013 — Ryan Bashour, a 2005 Brownsville graduate, shot 1-under 69 in the western qualifier to finish tied for fourth place and earn one of the 13 qualifying berths into the Pennsylvania Open. Belle Vernon’s Bo Lustig and Connellsville’s Pete Dzambo also made the cut. The trio joined Robert Rohanna, exempted into the Open, for the state championship at the Commonwealth National Golf Club outside of Philadelphia on Aug. 12-14. Lustig, a Belle Vernon graduate, finished tied for ninth place at 2-over 72. Dzambo, a Connellsville grad, was right on the cutline, finishing at 3-over 73 with five other golfers.

2012 — Scott VanSickle drove in four runs and Drew Denham finished with three RBI, including a two-run triple, to lead Caileigh’s to a 16-4 over visiting Dunbar in Fayette County Baseball League action. VanSickle belted a two-run home run to key a four-run third inning, and added a two-run single in the three-run second inning. Ken Musko finished with two doubles, two singles and two RBI in the win. Lou Pasquale went the distance for his first win of the season, allowing six hits with three strikeouts and four walks.

2011 — Uniontown found out the night before that it would represent Fayette County in the American Legion Region 6 playoffs at Shaler High School. The quick notification didn’t phase Uniontown, who opened with a 9-8 win over Monroeville. Trailing 8-6 entering the bottom of the ninth inning, Uniontown scored three runs for a walk-off victory. Bobby King’s RBI single and Adam Crayton’s two-run double were the key hits in the late rally.

2009 — A.J. Kerr drove in two runs with a double and a single, earned a save and recorded the last out of a triple play as Mitch’s Bail Bonds beat Watson & Sons, 3-1, in Fayette County Baseball League action. Watson & Sons had runners on first and second to open the first inning when A.J. Curtis hit a line drive to shortstop Jason Britton, who threw to second baseman Troy Speicher, who relayed it to Kerr at first base to complete the triple play. Ryan Encapara pitched the first six innings with two strikeouts and no walks for the win. Kerr worked the seventh inning with two strikeouts for the save.

2009 — The teams went to the seventh inning in a 0-0 tie, but Blue Mountain rallied for a 3-1 win over Hopwood in FCBL action. Blue Mountain’s first run scored on a wild pitch and the final runs came home on Aaron Thompson’s two-out, two-run single. Addison Scherich wne the distance for the win. Mike Klamerus had two hits for Hopwood.

2008 — Brian Muransky and Matt Bianco both hit two-run home runs to spark Blue Mountain to a 5-0 Fayette County Baseball League home win over Potter’s Clubhouse. Winning pitcher Justin Schrader had a perfect game going with one out in the sixth inning when Mike Ciarochi lined a clean hit off the pitcher’s glove to spoil the perfect game. Muransky also doubled for Blue Mountain (20-4-1).

2008 — Ethan Mildren pitched out of a bases-load situation with no outs in the top of the sixth inning as Uniontown won Game 3 of the Fayette County American Legion Baseball League semifinals against visiting California, 11-5, and advance into the championship series against Charleroi for the third straight year. Winning pitcher Kevin Gmiter (4-0) allowed three runs on five hits with two strikeouts and two walks in five innings. Mildren allowed two runs on two hits with two strikeouts and no walks in four innings for the save. Uniontown’s Nick Erminio finished with a single, double, solo home run and three RBI. Teammate Joe Eperjesi had a double, single, two RBI and two runs scored.

2007 — The Pittsburgh Penguins gave coach Michel Therrien a one-year contract extension through the 2008-09 season after guiding the team to the playoffs for the first time in six years.

2007 — Connellsville’s Andy Schleihauf hit the ball far, but just short of a game-winning home run as Charleroi survived a late-inning scare for a 6-4 win and a return trip to the Fayette American Legion Baseball League championship series in a rematch against Uniontown. Nate Helster’s double gave Charleroi a 5-3 lead in the seventh inning. Winning pitcher Matt Dishong went the distance, allowing four runs on 10 hits with four strikeouts and five walks. Charleroi’s Brendan Costantino went 4-for-5 with an RBI and a run scored. Andrew Spargur led Connellsville with an RBI and a run scored.

2007 — Matt Holliday drove in three runs and the Colorado Rockies held on for a 10-8 victory over the Pittsburgh Pirates. All but one of the game’s 18 runs scored in the first five innings, and there were five errors and a major league record-tying five sacrifice flies.

2006 — The Washington Nationals scored four runs in the top of the 11th inning, two scoring on Nick Johnson’s tie-breaking double, for an 8-4 win over the Pittsburgh Pirates.

2005 — Connellsville breezed to a 15-1 victory over Point Marion to advance to the Fayette American Legion Baseball League championship series against Uniontown. Andy Schleihauf had a two-run double and Kasey Eutsey added a two-run triple to spot Connellsville to a 6-0 lead in the first inning. Casey Shultz went the distance for the win, allowing one run on five hits with six strikeouts and three walks in seven innings. Wes Hughes, Chad Shroyer and Dave Sumner all hit home runs for Connellsville. Schleihauf drove in four runs, with two singles, a double and triple, and Eutsey finished with three RBI.

2005 — Lance Armstrong fought off challengers in the Pyrenees to with stage 14, taking another step towards winning his seventh Tour de France.

2004 — Todd Dunham went the distance, scattering six hits and striking out nine, as Mario’s defeated Carmichaels, 4-3, in Fayette County Baseball League action. Dunham also had the game-winning RBI with a sacrifice fly in the top of the seventh inning. Chris McManus led Mario’s with a double, while Ryan Encapera and Bill Rouse each had two singles.

2004 — Carmichaels cruised to a 12-3 victory over Colonial 3 to advance to the Fayette American Legion Baseball League semifinals against Uniontown. Carmichaels took advantage of Colonial 3 in the late innings with seven of the final 10 runs reaching base by either walk or error. Jamie Kowalczyk paced Carmichaels with four hits, while Justin Corso added three and two RBI. Jeff Lapkowicz allowed three runs on five hits with one strikeout and three walks in six innings.

2004 — Kris Benson limited Florida to two runs over 8.1 innings to lead Pittsburgh past the Florida Marlins, 6-2.

2002 — Chris Gallick and Dennis Show combined on a six-hitter to lead Mill Run to an 11-5 Fayette County Baseball League victory over Connellsville. Gallick allowed four runs on five hits in four innings. Show allowed one run on two hits with seven strikeouts in the final three innings. Dan Gratchic had a double and two singles for Mill Run (17-7-1). Teammate Brandon Bryner had three RBI. Bill Gabonay had a double and single for Connellsville.