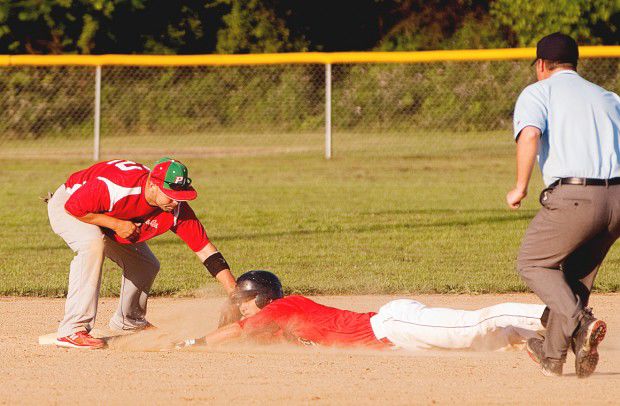 Pasta Lorenzo’s Ken Musko tags Belmont Inn’s Sam Beucher for the out at second base during a Fayette County Baseball League game on June 30, 2011. Evan Arison scored the first run and added a solo home run in Belmont Inn’s 3-0 victory. 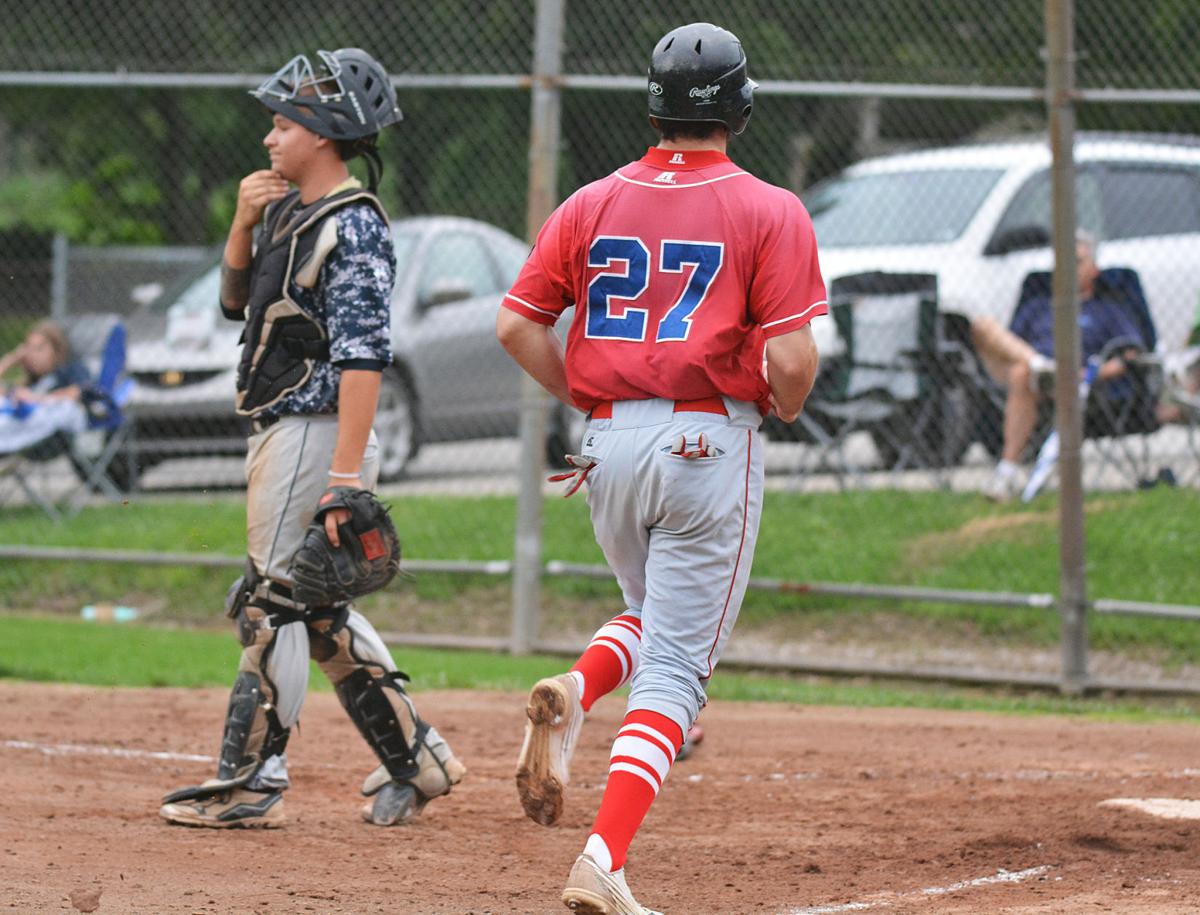 Pasta Lorenzo’s Ken Musko tags Belmont Inn’s Sam Beucher for the out at second base during a Fayette County Baseball League game on June 30, 2011. Evan Arison scored the first run and added a solo home run in Belmont Inn’s 3-0 victory.

2019 — Pitching and defense carried the day, as the National and American teams played to a 1-1 tie in the Fayette American Legion Baseball League All-Star Game at Hutchinson Field.

2017 — Waynesburg scored three runs in the first, and that was all the offense Luke Robinson needed in a 12-0 victory over visiting Carmichaels in Fayette American Legion Baseball League play. Robinson had six strikeouts and didn’t walk a batter in three innings to pick up the win. He also had a two-run triple and run-scoring single. Jesse Johnson was 3-for-5 with a double and two singles. Justin Goodman also had three hits and drove in two runs.

2016 — Ryan Minteer limited Mill Run to three hits and struck out 13 to lead Carmichaels to a 5-1 win in a Fayette County Baseball League game. Tyler Delval finished with a double and single for Carmichaels.

2016 — Kaitlyn Johnson was back in the pool for the 100-meter freestyle, her second event of the week-long U.S. Olympic Team Trials, and the Uniontown graduate finished third in her heat with a time of 57.28 seconds. Johnson finished 80th overall.

2016 — Belle Vernon football coach Matt Humbert added the title Athletic Director to his resume after he was hired by the Belle Vernon Area School Board. Humbert replaces Jesse Cramer, who resigned on Jan. 25. Humbert received a supportive 9-0 vote on a one-year supplemental contract that will pay him an additional $10,000.

2015 — Mitch’s Bail Bonds scored all its runs in the top of the fifth for a 5-4 win over Mill Run in a Fayette County Baseball League game shortened to five innings by rain. Josh Miller’s single plated the tying and winning runs. Sam Beucher’s two-run triple and Kris Firestone’s run-scoring single helped Mill Run grab a 4-0 lead. Brian Shaffer got the win and Steve McCaw pitched a perfect inning for the save.

2015 — The combination of Zach Uhazie’s pitching, timely hitting and a dousing rain shower proved too much for visiting Connellsville as Uniontown secured a 7-1 victory in Fayette American Legion Baseball League action. Jimmy Malone drove in Connellsville’s lone run. Uhazie continued his mastery of Connellsville, recording four of the final six outs by strikeout.

2014 — Troy Kifer and Giuseppe Schiano each hit a two-run double in a five-run first to spark Uniontown to an 11-4 win over visiting Carmichaels in a Fayette American Legion Baseball League game. Steven Salanick also contributed two hits and two RBI as Uniontown improved to 13-1 in league play and 19-2 overall. Winning pitcher Luke Wallace tossed a complete game, allowing six hits and just one walk with eight strikeouts. Michael Blasinsky had two hits for Carmichaels, including a two-run single.

2014 — Connellsville exploded for eight runs in the top of the seventh for a 13-6 Fayette American Legion Baseball League win at Smithfield-Fairchance. The game was called after seven innings due to darkness. Garrett Brooks led Connellsville with a double, two singles, three runs scored and two RBI. Colby Shipley went the distance for the win, allowing four earned runs on eight hits with four strikeouts and three walks. S-F’s Micah High hit a 3-run home run in the fifth inning.

2014 — Joe Leonard was back in Class AAA after starting the 2014 season with the Mississippi Braves (Class AA) of the Southern League. The Connellsville graduate, drafted out of the University of Pittsburgh in the third round of the 2010 Amateur Draft, played 36 games in Mississippi before getting the call back to Class AAA and the Gwinnett Braves of the International League.

2014 — Waynesburg Central graduate Robert Rohanna was tied for 11th in the Frank B. Fuhrer Jr. Invitational with a two-round total of 1-over 141. Geibel Catholic grad and Willowbrook Country Club pro Brian Dunaway finished at 19-over 159 (79-80) and sits in 40th place.

2013 — Uniontown’s American Legion baseball team swept a doubleheader over visiting Morgantown, 10-6 and 6-3. Zack Stashick won the first game. Drew DeBerry, Colin McKee and Steve Salanick had two hits each for Uniontown in the second game. Corey Dascenzo earned the win in the nightcap with two strikeouts and two walks.

2013 — Kris Firestone singled in Garrett Brooks in the 10th as Mill Run rallied for a 4-3 win over Dunbar in FCBL play. Bob Fulton pitched the final three innings for the win with four strikeouts and three walks.

2011 — Andy Schleihauf atoned for a run-producing error with a walk-off home run as Bud Murphy’s beat Mill Run, 2-1, in a Fayette County Baseball League game. Schleihauf’s error allowed Mill Run’s only run, but he made up for it with a double and his solo homer with two outs in the bottom of the seventh. Marty Fagler got the win with 10 strikeouts.

2009 — Waynesburg Central grad Zach Schloemer shot a 5-over 70 to finish tied for 20th in the 109th Amateur Championship hosted by Allegheny Country Club. Schloemer closed with a three-round total of 10-over 220. He opened the championship with a 6-over 76 in the morning round, but carded a 1-under 69 in the afternoon to finish with a 5-over 145 on the first day.

2009 — Zack Patterson hit a grand slam in the eighth inning to lift Mario’s to a 6-2 win over Watson & Sons in Fayette County Baseball League action. Joby Lapkowicz came on in relief to earn the win and struck out three batters for Mario’s (14-2). Scott VanSickle went 3-for-3 and doubled, and Josh Greene hit 2-for-3 in the win.

2008 — The Cincinnati Reds walked off with a 4-3 win over the visiting Pittsburgh Pirates on Ken Griffey Jr.’s two-run home run, the 603rd of his career.

2006 — Colonial 3 pounded out 17 hits for an 18-7 victory at California in Fayette American Legion Baseball League action. Nick Molchan went the distance for the win, allowing seven runs on eight hits with eight strikeouts and eight walks. Dan Guthrie finished with four hits and scored four runs in the win.

2006 — Uniontown won the first game, 6-1, while Connellsville avoided the sweep with a 10-4 win in the second game of a Fayette American Legion Baseball League doubleheader. Uniontown’s Cory Sawka had two hits, two runs scored and an RBi in the opening game. Connellsville’s Kasey Eutsey finished with three runs, two hits and three RBI in the doubleheader. Bobby Fulton picked up the win in the second game.

2004 — Point Marion won the first game, 11-7, and Carmichaels took the nightcap, 21-3, in a Fayette American Legion Baseball League doubleheader. Craig Hriblan pitched a complete game in the first game, allowing nine hits with three strikeouts and two walks. Carmichaels (15-2) scored 10 runs in the top of the first and 10 more in the fourth in the second game. Justin Corso (6-0) went the distance for the win, allowing two hits with one strikeout and one walk.

2004 — Bobby Hill drove in the winning run with a two-out, pinch-hit single in the ninth inning to lead the Pittsburgh Pirates over St. Louis, 6-5, completing their first three-game sweep of the Cardinals at home in nearly 15 years.

2004 — Uniontown slipped past Colonial 3, 13-12, for a Fayette American Legion Baseball League victory. Bob Madison and Nick Midlik hit solo home runs for Uniontown. Corey Watkins hit a pair of home runs for Colonial 3. Madison pitched out a jam in the eighth to preserve the win.

2004 — Bud Murphy’s defeated Carmichaels, 11-2, for a Fayette County Baseball League victory. Dale Eutsey went the distance to improve to 4-1, allowing five hits and two earned runs with three strikeouts and one walk. Brian Sankovich smacked a two-run home run and Dave Zimcosky hit a solo shot for Bud Murphy’s. Sankovich finished with three hits and three RBI. Brian Shipley had a pair of doubles and two RBI, while Greg Beucher had a double and single and two RBI in the win.

2003 — Rostraver scored eight runs in the bottom of the third and cruised to a 14-3 Fayette County Baseball League win over visiting Locker Room. Justin Murphy hit a two-run double and Ryan Russell, Brandon DePhillips and Bill Calcagni all had run-scoring singles. Russell finished with three hits, three runs and three RBI. Adam Dukate had a two-run triple and single for the Locker Room.

2003 — Chris McManus opened the bottom of the seventh inning with a double and Craig Kordich singled him home to lift Perryopolis to a 6-5 Fayette County Baseball League win over Mario’s which had tied the game with three runs in the top of the inning.

2003 — Uniontown defeated Waynesburg, 10-0, for a Fayette American Legion Baseball League victory called in the seventh due to the Mercy Rule. Joe Hoover (2-0) allowed only two hits, while striking out six and walking three. Nick Midlik went 5-for-5 with three RBI.

2003 — California’s Trevor Consavage allowed 10 hits and his defense had five errors, but he struck out 10 and walked only one to pick up his first win of the year with an 11-8 win over Charleroi in Fayette American Legion Baseball League action. Charleroi’s Dan Thomas hit a pair of home runs. Shane Tonkavitch went 4-for-5, including a double, with two RBI for California.

2003 — Ryan Caringola allowed one run on two hits in six innings in Masontown-Point Marion’s 7-4 win over visiting Colonial 3 in a Fayette American Legion Baseball League game. Chris Buncic had a three-run home run and single, and Josh Franks also homered for the hosts.

2002 — Kris Benson allowed one run and six hits in 6.2 innings, leading the Pittsburgh Pirates to a 6-2 win over the Detroit Tigers and giving him back-to-back wins for the first time since September of 2000.