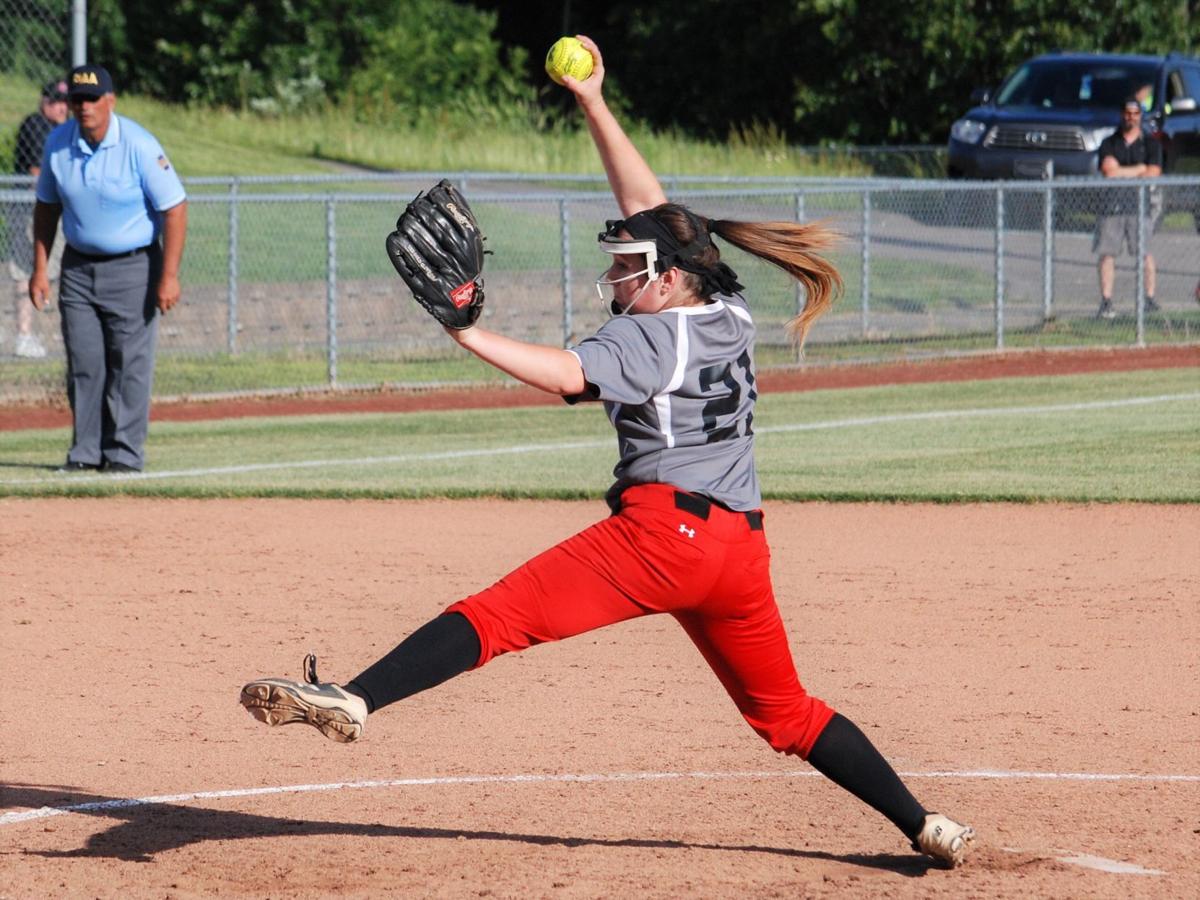 Lexi Klatt delivers a pitch during Southmoreland’s 10-7 victory in the first round of the PIAA Class AAA softball playoffs over Central Martinsburg at North Allegheny on June 4, 2018. The win was the school’s first in any sport in a state playoff game. 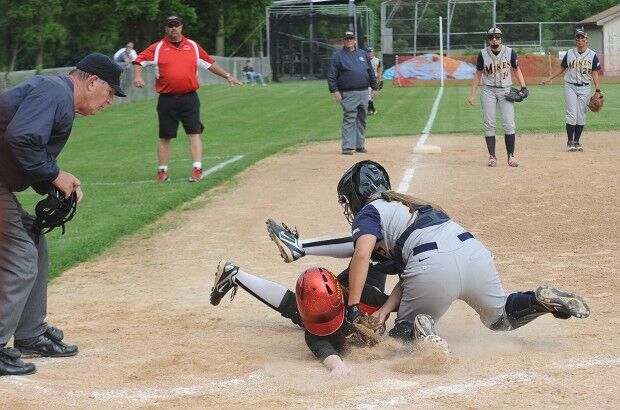 Carmichaels’ Lindsey Osborne (16) applies the tag on Fannett-Metal’s Melinda Hammond in the fifth inning of a PIAA Class A first-round playoff game in Everett on June 4, 2012. Fannett-Metal edged the Lady Mikes, 2-1.

Lexi Klatt delivers a pitch during Southmoreland’s 10-7 victory in the first round of the PIAA Class AAA softball playoffs over Central Martinsburg at North Allegheny on June 4, 2018. The win was the school’s first in any sport in a state playoff game.

Carmichaels’ Lindsey Osborne (16) applies the tag on Fannett-Metal’s Melinda Hammond in the fifth inning of a PIAA Class A first-round playoff game in Everett on June 4, 2012. Fannett-Metal edged the Lady Mikes, 2-1.

2019 — Luke Robinson yielded one hit over five innings in Carmichaels’ 8-0 victory over the Fayette Raiders in Fayette County Baseball League action. Robinson had 11 strikeouts and three walks. The Copperheads’ Joby Lapkowicz and Hunter Robinson each hit two-run home runs, and Chuck Gasti had two hits, including a triple. Brody Bonadio had three singles for Carmichaels.

2018 — D.J. Zimcosky and Dylan Brosky delivered clutch back-to-back, two-out doubles in the bottom of the sixth inning to break a 2-2 tie and lift the Brownsville Falcons to a 3-2 victory over Mercyhurst Prep in a PIAA Class AAA first-round playoff game at W&J’s Ross Memorial Park. Brosky battled through a line drive off his leg and a two-out infield error that allowed the Lakers’ only runs to score to throw a gutsy complete-game, two-hitter. The senior right-hander, who took a no-hitter into the sixth inning, struck out 15 and walked three.

2018 — WPIAL Class AAAA champion Belle Vernon bunted in three of their four runs for a 4-0 win over District 6 champion Bellefonte in a PIAA Class AAAA first-round softball playoff game at Peterswood Park. Winning pitcher Bailey Parshall struck out 10 batters and scattered three hits. The Lady Leopards improved to 22-3 and advanced to the quarterfinals against Mount Pleasant.

2018 — The West Greene softball team reached the 20-win mark for the third straight season with a 12-2 victory in six innings over Glendale in the opening round of the PIAA Class A softball playoffs. The Lady Pioneers pounded out 16 hits. Winning pitcher Jade Renner allowed seven hits with four strikeouts and no walks. She also went 4-for-4. Madison Renner had two doubles, a single and three RBI.

2018 — Gage Clark and Dalton Riggenbach combined on a 5-hit shutout Monday to lead Jefferson-Morgan to a 3-0 victory over visiting Waynesburg in Fayette American Legion Baseball League action. Clark started and went five innings for the win, allowing five hits with three walks and seven strikeouts. Riggenbach pitched the final two innings, striking out four and walking only one.

2018 — Andino Vecchiolla threw a no-hitter and walked one batter in Uniontown’s 1-0 victory over Connellsville in Fayette American Legion action. Vecchiolla struck out seven and the Uniontown defense committed one error. Connellsville’s Jake Ansell was also solid on the mound, allowing one earned run on six hits with one walk and eight strikeouts. Tanny Erminio drove in Dylan Bohna with the game’s only run.

2018 — Austin Bergman threw a no-hitter with three walks and nine strikeouts in Smithfield-Fairchance’s 6-0 win over visiting Carmichaels in Fayette American Legion Baseball League play. Nate Bricker had a double, drove in three runs and scored once for Smithfield-Fairchance. Dylan Rush drove in two runs and Jace Cappelinni went 2-for-3.

2018 — Punxsutawney ace Kylee Lingenfelter led the Lady Chucks to an 8-0 win over Elizabeth Forward in the opening round of the PIAA Class AAAA softball playoffs. Lingenfelter allowed two hits, struck out 14 and walked four.

2018 — The Mount Pleasant softball team needed 11 innings, but the extra work produced a 4-2 victory over Slippery Rock in the first round of the PIAA Class AAAA playoffs at Allegheny College. The Lady Vikings (18-1) advanced to the quarterfinals against Belle Vernon. Trailing 1-0 through three innings, Haylie Brunson’s solo home run tied the game in the top of the fourth inning. That was the last run scored until the game went into the international tie-breaker in the top of the 10th inning. Both teams scored a run in the 10th, but Mount Pleasant put two across in the top of the 11th inning on an error and ground out. Carolyn Alincic allowed one run on no hits with no walks and eight strikeouts for the win in relief of Meadow Uncapher. Uncapher allowed one run on seven hits with five strikeouts and two walks in her seven innings.

2018 — Ringgold coach Don Roberts called the PIAA Class AAAA first-round playoff game a “nail-biter,” but his Rams managed to hold on for a 4-3 victory over St. Marys at Kuntz Field in Punxsutawney. Trailing 1-0 after five innings, Ringgold scored twice in the top of the sixth inning and twice more in the seventh for a 4-1 lead. Chase Angotti’s double brought home the first run of the seventh inning and a perfectly-executed suicide squeeze by Koby Bubash plated the fourth run.

2018 — Mount Union scored seven runs in the bottom of the second inning and then held on for a 9-6 victory over Frazier in the first round of the PIAA Class AA playoffs at Penn State University. The Lady Commodores (16-7) led 2-1 after the first inning and 3-1 heading into the bottom of the second when Mount Union put up seven runs for an 8-3 lead. Frazier’s Logan Hartman allowed 14 hits and gave up five earned runs. She struck out two and walked one. The Lady Commodores’ Lauren Mastowski smacked a home run, and added a single for two runs scored and an RBI.

2015 — Juniata Valley rallied for the lead in the top of the ninth inning and then held off a late comeback by California for a 9-7 victory in the quarterfinals of the PIAA Class A baseball playoffs at First Commonweath Bank Field in Homer City. Juniata Valley (18-5) scored four runs in the top of the ninth inning. The Trojans (20-3) had the bases loaded with the tying run on second base, but the rally ended with a fly ball out to left field.

2015 — Connellsville scored 17 runs with 22 batters connecting for 13 hits in the first inning of a 22-2 Fayette American Legion win in five innings over Colonial 3. Dakota McWilliams allowed two earned runs on six hits with three strikeouts and one walk. Ty Henry hit a two-run home run, and John Przybylinski and Derek Orndorff both had two-run doubles.

2015 — A four-run fourth inning was the difference in Mill Run’s 5-3 win over New York Pizza in Fayette County Baseball League. Trevor Farrell was the winning pitcher and Grant Wortman collected a pair of singles in the win.

2015 — Trinity held off a late Belle Vernon rally for an 8-4 victory in the quarterfinals of the PIAA Class AAA softball playoffs. The Lady Hillers pulled away with seven runs in the fifth inning and increased the lead to 8-0 in the sixth inning. The Lady Leopards had the bases loaded with Emily Frederick at the plate, but the team’s home run leader flied out to left field. Belle Vernon ended the season with a 21-3 record.

2015 — Kenzie Freyermuth singled home the winning run in the bottom of the 10th inning to send Cochranton to the PIAA Class A softball semifinals with a 1-0 win over Jefferson-Morgan. The run scored with the international tiebreaker played.

2013 — Mill Run scored at least one run in each inning as it rolled past visiting Belmont Inn, 9-6, in Fayette County Baseball League action. Tyler Geary belted a triple and double for Mill Run, part of the 11-hit attack. Colvin Adey had a pair of doubles. In the bottom of the sixth inning with Mill Run leading by a run, Garrett Brooks belted a two-run home run for some insurance that put the game out of reach. Anthony Speeney picked up the win, recording five strikeouts and walking six batters.

2013 — Brian Resnik picked up the victory with Joby Lapkowicz recording his first save of the season as Carmichaels held off Mitch’s Bail Bonds in FCBL play, 4-1.

2012 — California suffered a 7-1 defeat to Bishop McCort in the opening round of the PIAA Class A baseball playoffs at First Commonwealth Bank Field in Homer City. The Trojans (19-2) stranded five runners in scoring position.

2008 — Zach Duke allowed two runs over 7.2 innings and Raul Chavez drove in three runs to lead the Pittsburgh Pirates to a 5-2 victory over the Houston Astros.

2008 — The Detroit Red Wings won the Stanley Cup for the fourth time in 11 seasons with a 3-2 victory over the Pittsburgh Penguins in Game 6 of the finals in Pittsburgh.

2007 — Ashley Nichols tossed a no-hitter as four Belle Vernon seniors had another reason to celebrate at the graduation ceremony later in the day with an 8-0 victory over Perry Traditional Academy. Nichols allowed only four runners, three on walks and the other on an infield error, but three were caught stealing.

2007 — The Pittsburgh Steelers signed Verron Haynes to a one-year contract.

2007 — The Los Angeles Dodgers held on for a 6-5 win over the Pittsburgh Pirates. The Dodgers took three of four games in Pittsburgh.

2006 — Chris Young held the Pittsburgh Pirates hitless through 5.1 innings to lead the San Diego Padres to a 1-0 win.

2005 — Wana B Heros and Waynesburg split a Fayette County Baseball League doubleheader. Adam Sadler pitched a two-hit shutout, leading Wana B Heros to an 11-0 win in the opener. Craig Hriblan had a big hit in the win with a bases-loaded triple. Andy Patrick pitched Waynesburg to an 8-5 win in the nightcap. J.W. Kayla sparked the winning effort with two singles and a triple.

2005 — Mill Run made the most of five Brownsville errors for a 5-1 win in FCBL action. Brandon Bryner, Justin Marcinko and Dennis Show all had two hits for Mill Run.

2004 — The Pittsburgh Pirates scored two runs on singles by Craig Wilson and Chris Stynes in the top of the ninth inning to rally for a 2-1 victory over the Chicago Cubs. Salomon Torres got the win and Jose Mesa pitched the ninth for his 14th save as the Pirates ended a five-game losing streak.

2004 — Pittsburgh manager Lloyd McClendon and St. Louis manager Tony La Russa were each suspended for two games after getting into a shouting match during a game that caused both benches to empty. McClendon and La Russa were also both fined undisclosed amounts by Bob Watson, baseball’s vice president of on-field operations.

2003 — First-round pick Troy Polamalu battled a left hamstring issue that kept him off the field during spring coaching sessions.