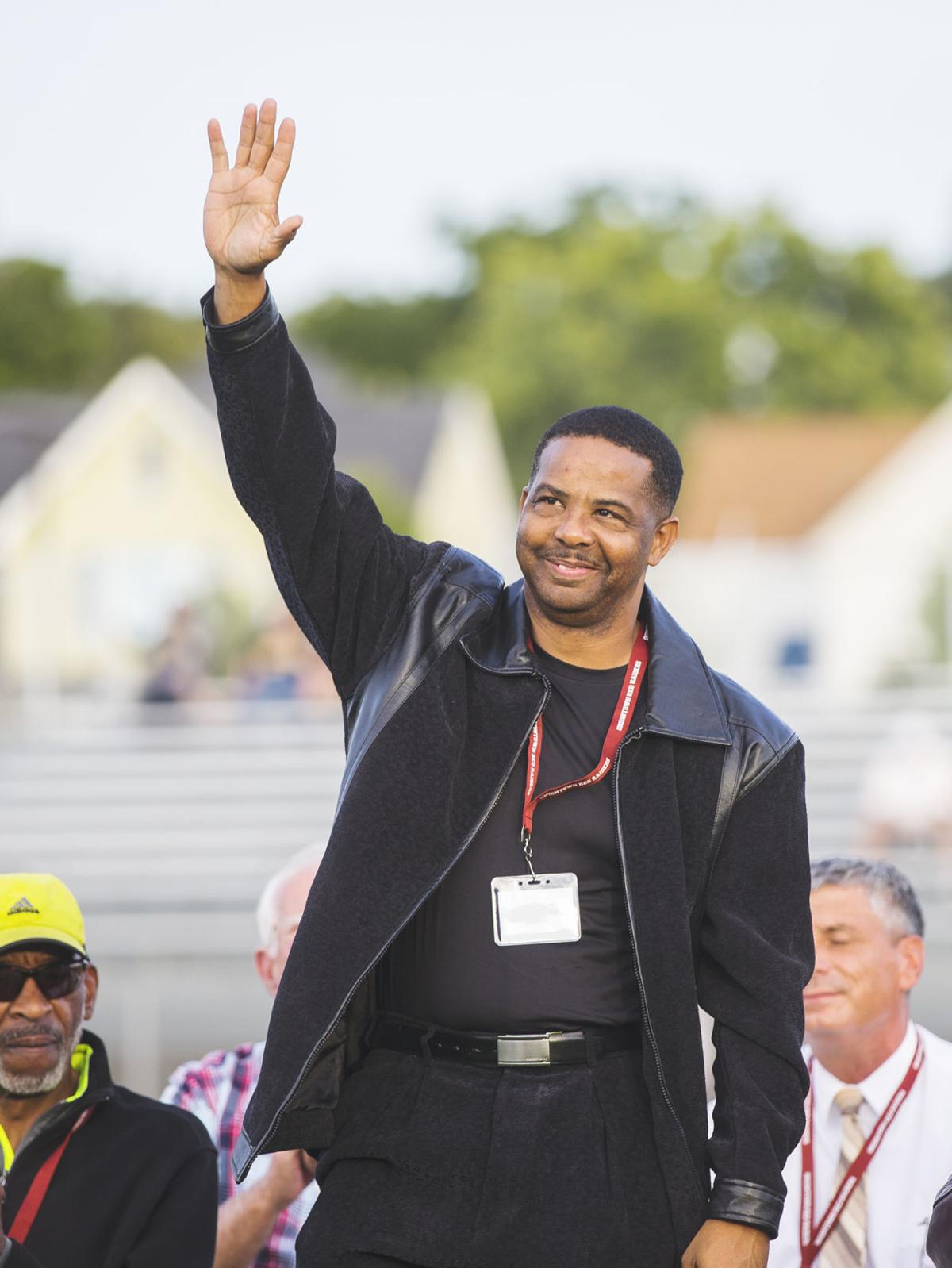 Terence Jackson was a three-sport athlete at Uniontown who still holds the WPIAL high jump record and was a member of the 1981 Red Raiders state championship basketball team. 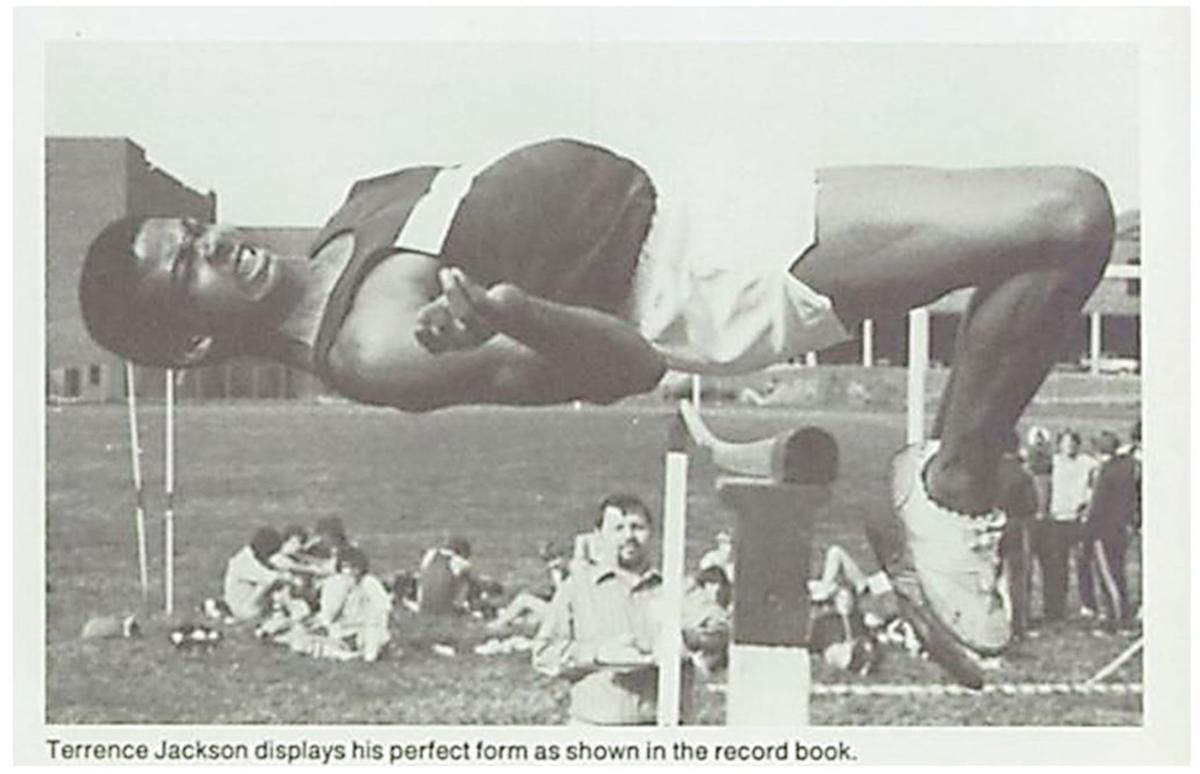 Terence Jackson is shown competing in the high jump for Uniontown. Jackson still holds the WPIAL high jump record at an even seven feet.

Terence Jackson was a three-sport athlete at Uniontown who still holds the WPIAL high jump record and was a member of the 1981 Red Raiders state championship basketball team.

Terence Jackson is shown competing in the high jump for Uniontown. Jackson still holds the WPIAL high jump record at an even seven feet.

Kids will do whatever they can to play a sport they love.

In the case of 1982 Uniontown graduate Terence Leon Jackson, it was he and a group of young friends putting together their own high jump pit. Years later Jackson would make an indelible mark in that event in the district and state record books.

Jackson, a three-sport athlete at Uniontown, is part of the 2020/2021 class of inductees for the Fayette County Sports Hall of Fame. He and the rest of the inductees and representatives will be recognized at a Hall of Fame Golf outing/Luncheon/Social starting at 9 a.m. on June 25 at Pleasant Valley Golf Club in Connellsville.

Jackson lettered in football and basketball for the Red Raiders but his best sport was track & field. In 1980 he set — and still holds — the WPIAL high jump record, clearing the bar at seven feet.

His beginnings in the event and track & field in general came long before that.

“When we were younger we would get neighborhood friends and we would get together, sometimes we would go to the track meets,” Jackson said while speaking recently about his induction on George Von Benko’s Sports Line Talk Show on WMBS Radio. “I remember seeing some previous high jumpers, Ray Thomas who used to do the Western Roll, Howard Wardell, I remember watching him jump, and, of course, Chuck Muncie held the record down there at 6-4 at Uniontown.

“Brian and Chris McLee were the two that participated in that. We were just close neighborhood friends. Sometimes we would have makeshift high jump pits. We’d make our own pits with boxes and pillows as kids.

“As we got older they participated (in the high jump) at Lafayette Junior High. Just from being friends and hanging around them I ended up taking that on as well.”

Jackson also was a good sprinter and hurdler at Uniontown but in the high jump he was in another world.

Jackson went to the Junior Olympics the summer after his ninth-grade year and cleared 6-foot-4 in the high jump. The following year as a sophomore on the Red Raiders track & field team he shattered Muncie’s school record by clearing 6-10. He went on to claim the WPIAL (6-8 1/2) and PIAA gold medals (6-10).

As he junior he set the still-standing WPIAL record by clearing the bar at 7-0 at Latrobe and also repeated as PIAA champion with a state-record jump of 7-1/2, which now ranks second all-time.

Jackson made it a WPIAL three-peat with a jump of 6-5 as a senior and finished second in the state by clearing 6-10.

Jackson preferred the newer Fosbury Flop method in the event, credited to Dick Fosbury, over the Western Roll that had been popular for years beforehand.

“I attempted the Western Roll but just learned with your momentum, you’re able to just maintain your speed and acceleration to advance over the bar and it was much easier with the Fosbury Flop,” Jackson explained.

Jackson even caught the attention of Sports Illustrated which included him in their April 5, 1982 edition.

“It was surprising. My sister notified me of that,” Jackson remembered. “It was in the Sports Illustrated Faces in the Crowd. I was named among the high school all-time list of high jumpers. I was actually seventh in the nation at the time.”

After high school Jackson continued to excel in the high jump at Hagerstown Junior College, advancing to nationals three times where he earned three silver medals all with jumps of 7-0.

“It was definitely a great experience,” Jackson said. “The program is really set up to help you be successful. The training was just a little more vigorous. Just to have that opportunity just to compete with some of the great athletes.

“I remember going to Franklin Field in Philadelphia in college for the (Penn) Relays. I even got an opportunity to run hurdles that year in the shuttle hurdle relay. We get there and we were running in the heat against the Pitt Panthers and at that time they had the hurdler who won the gold medal, Roger Kingdom, actually. We were a little concerned going to the meet but fortunately that day he didn’t participate. But just to participate on that level was a great experience for sure.”

From there Jackson went on to spend six years in the Navy.

Jackson also played football for the Red Raiders, participating as a sophomore when the team went 7-4.

Jackson was a junior on the Uniontown team that went 32-2 and won the WPIAL and PIAA championships in 1982. While he saw minimal playing time that season he scored 197 points the following year as a senior when the Red Raiders went 20-4 overall and 15-1 in section play. He scored a career-high 22 points in a regular-season win over Norwin but the Knights would defeat Uniontown in the WPIAL playoffs, 63-57.

Jackson credits many for his success in looking back on his career.

“Growing up we tried to stay active in sports and were always encouraged to keep our academics in tact,” Jackson said. “We did a lot of sandlot football and basketball and baseball.”

Jackson commended Ozzie Minor and Rich Bierbower for the roles each played in his life.

Jackson got to know Bierbower when he hit junior high school.

“He was very influential as well,” Jackson said. “Going to Lafayette he was not only your teacher but he coached all the sports there as well so you got a chance to spend a lot of time with him, very encouraging and very inspirational.

“Even in the summertime he would take his own time and take us kids to basketball tournaments. I remember going to Shaler. And these were things he would do just on his own time.

“We did have some great influences from people like that, Mr. Ozzie Minor and Mr. Rich Bierbower. There were others as well. I know there was Terry Jones, they called him Horse Jones, and Mr. Campbell, but we did have some great support as youth in the neighborhood and community, to mention just a few.

“I’m always grateful, I know growing up I always used to meditate and share on a scripture, Psalms 37:4 (“Delight yourself in the Lord, and he will give you the desires of your heart.”) Learning more about God, he did bless me with the desires of my heart to excel. So I do have to give a lot of credit or all credit to that, and my mother raising me that way.”

Jackson expressed gratitude to the Fayette County Sports Hall of Fame for selecting him to be enshrined.

“It’s very humbling,” he said. “I really appreciate it, being named among a lot of the great athletes that have come out of Fayette County. It’s truly an honor to be among that group. It’s definitely exciting.”

Jackson lives in Summerville, South Carolina, and works in Charleston.

“I’ve been working for the Department of State, the Passport Center, over the last seven years,” he said. “That’s part of what brought me to South Carolina, the Navy. I got out of the military and resided here and still continue to live here.”

Jackson hopes to be back in his hometown to celebrate his induction.

“I plan on coming in on the 25th just to have some good fellowship and participate,” Jackson said.

“It’s a great honor to be inducted into the Fayette County Hall of Fame. I appreciate the accolades and the opportunity to be a part of this great event.”

Congratulations Terry. Pride of the Raiders. Your teammates are still a great bunch of young men. Being a country bumpkin I didn’t get to see many games but football as part of band. You all brought Uniontown a great feeling and you deserve this recognition for exceptional effort. Congratulation and thank you for your service🇺🇸