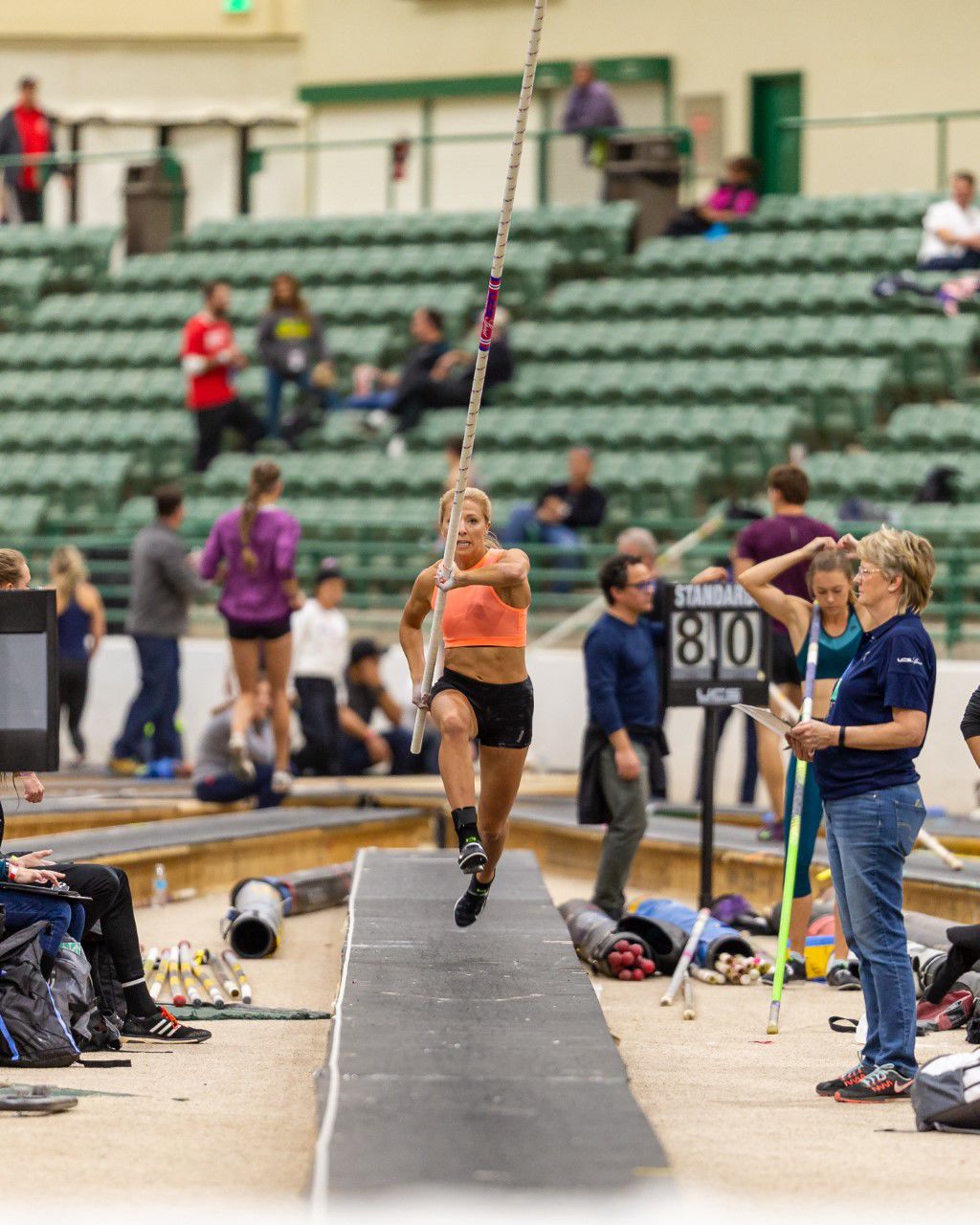 Marissa Kalsey sprints down the runway for a vault attempt at the Reno Pole Vault Summit in Reno, Nev., on Jan. 17. Kalsey finished fourth in the Elite Women 2 with a vault of 4.15 meters (13-7). (Photo by Brian Banks) 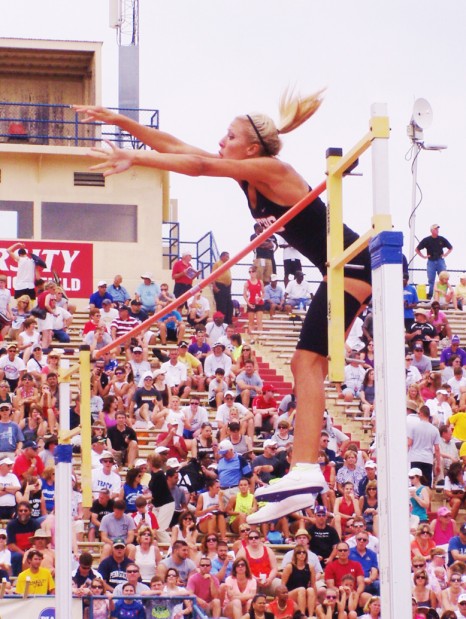 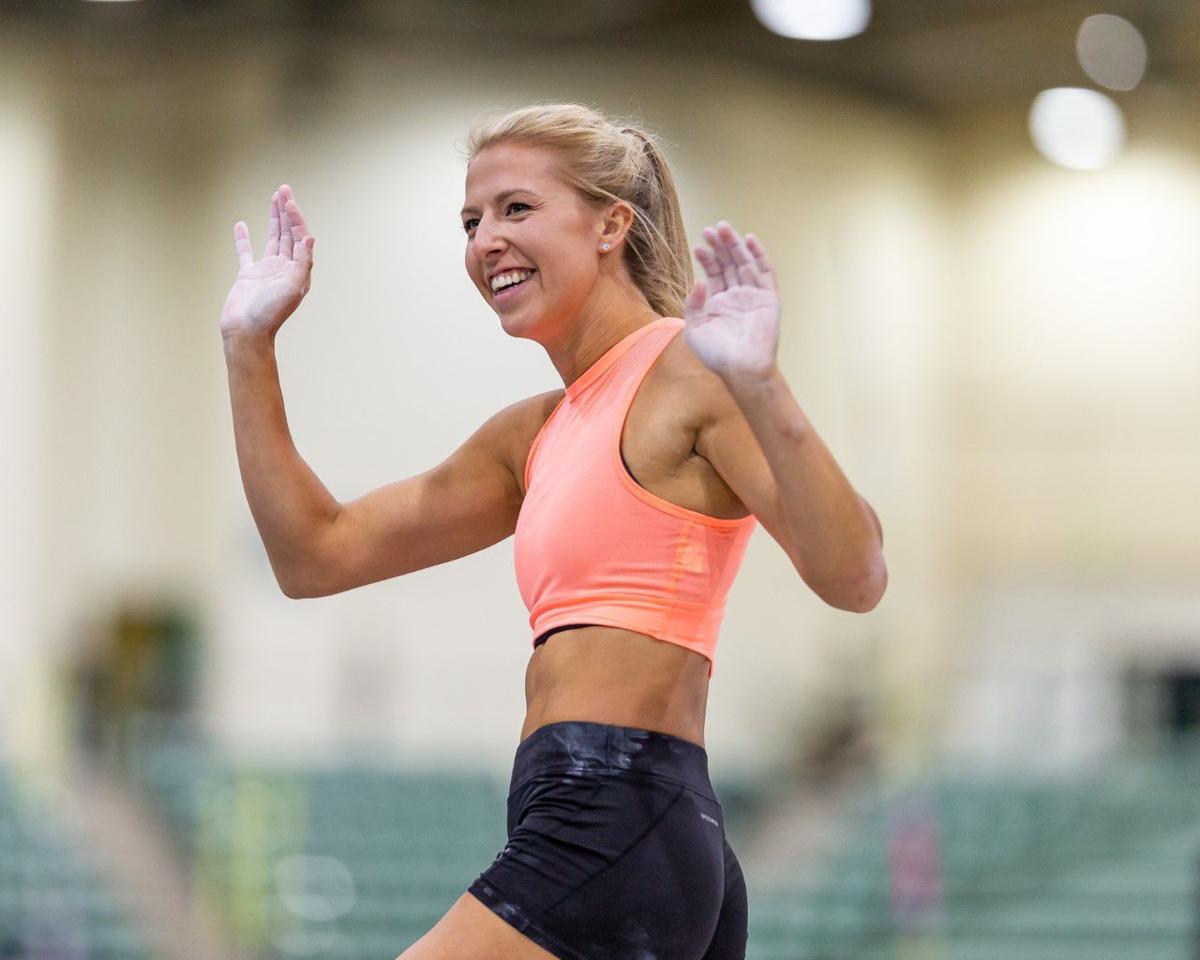 Marissa Kalsey acknowledges the crowd at the Reno Pole Vault Summit in Reno, Nev., on Jan. 17. Kalsey finished fourth in the Elite Women 2 with a vault of 4.15 meters (13-7). (Photo by Brian Banks) 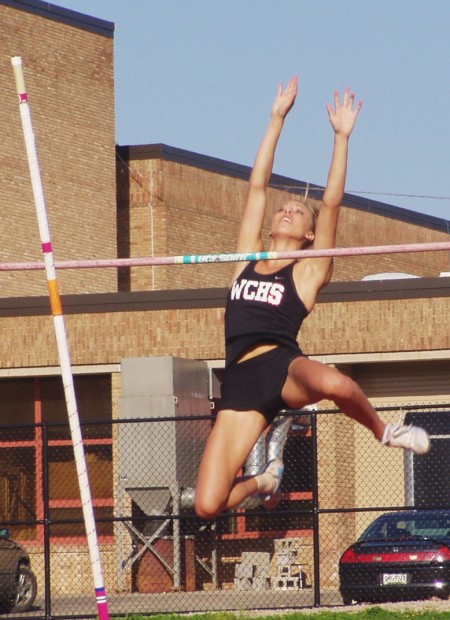 In this March 29, 2012 file photo, Waynesburg Central’s Marissa Kalsey easily clears the bar in the pole vault during a Section 6-AA triangular against Jefferson-Morgan and Beth-Center at Waynesburg.

Marissa Kalsey sprints down the runway for a vault attempt at the Reno Pole Vault Summit in Reno, Nev., on Jan. 17. Kalsey finished fourth in the Elite Women 2 with a vault of 4.15 meters (13-7). (Photo by Brian Banks)

Marissa Kalsey acknowledges the crowd at the Reno Pole Vault Summit in Reno, Nev., on Jan. 17. Kalsey finished fourth in the Elite Women 2 with a vault of 4.15 meters (13-7). (Photo by Brian Banks)

In this March 29, 2012 file photo, Waynesburg Central’s Marissa Kalsey easily clears the bar in the pole vault during a Section 6-AA triangular against Jefferson-Morgan and Beth-Center at Waynesburg.

Four years ago Marissa Kalsey was recovering from a serious ankle injury that derailed not only her bid to become an NCAA Division II outdoor pole vault champion, but any hope of making a run for the 2016 U.S. Olympic Trials.

Fast forward to 2020 and the Waynesburg Central and Westminster graduate was well into her quest for another attempt at securing a berth into the U.S. Olympic Trials when her training was dramatically altered because of the measures undertaken to curtail the spread of the COVID-19 virus.

“Today is the last day we can work out. We vault at a school,” Kalsey said of a text she received while being interviewed on March 16. “I definitely understand the precautions. Most of the public gyms shut down. We work out in the back of a little gymnastic place.”

It’s not as though Kalsey can go to the local park to vault, either. Nor, does she have the same resistance equipment at her disposal as she does at her training center.

“There’s not much I can do at home. I’ve changed the way I’ve done my running workouts. I’ve gotten a lot faster,” said Kalsey, adding, “The lifting gets tough without actual weights.

“All of this has thrown a wrench in it, a little bit. So, the unknown is what is going to happen.”

In the ever-evolving measures to deal with coronavirus spread, the USATF announced on March 17 all sanctioned events in the next 30 days would be canceled.

Then, the International Olympic Committee (IOC) announced on Tuesday the 2020 Tokyo Summer Olympics would be postponed for the first time for a reason other than war (1916, 1940, 1944). The IOC statement announced the Tokyo Games “must be rescheduled to a date beyond 2020, but not later than the summer of 2021, to safeguard the health of the athletes, everybody involved in the Olympic Games and the international community.”

Pressure was mounting on the IOC to delay the Games, especially after Canada and Australia said they would not send athletes to Japan and a number of national federations voiced their concerns.

“At first, a few weeks ago, I was disappointed it might be postponed or cancelled,” Kalsey said Tuesday from her family home in Waynesburg after hearing the news. “Things got worse, more serious. It’s more important to keep people safe.

“It’s disappointing. There might not be many opportunities for qualifying.”

“It’s been an awesome team approach,” said Kalsey. “I’m excited, but unsure. I’m in a better spot than ever to jump higher. I can get that standard, eventually.

“We have to come together for a plan for what we will do. Everything is still up in the air.”

Kalsey is just trying to do what she does through this difficult stretch.

“I’m trying to stay in shape. I’m doing the most I can do training-wise,” explained Kalsey. “I do the speed and fast-twitch stuff, but I might have to go back to hard workouts and sore muscles.”

Kalsey is adapting as best she can.

“I set up rings upstairs (for her gymnastics training) and I have some weights,” said Kalsey. “We have to come up with a plan to be ready for 2021. They don’t know a date yet. I just need to be ready.”

Still, even with all the speed training and work with gymnastics and in the weight room, Kalsey said she needs to vault.

“There are no pits to vault at,” said Kalsey. “It really becomes important when you’re competing to be able to vault and to have the confidence on the poles. It’s a whole different mindset when you’re vaulting.

“It comes down to vaulting.”

Also, Kalsey said it takes time to get moving back into competition mode after any layoff.

“After downtime, like after the indoor season, it takes time to kind of build back up,” said Kalsey. “It takes one, two months. I need a couple weeks to drill. Then, do short runs, long runs with short runs, and long runs (on the runway).

“It’s still a process to get back on your biggest poles.”

And, as with many Americans, the precautionary measures have affected some of her employment. Although, she does some work at home.

“I sub at a school, usually on Mondays,” said Kalsey. “I do have a job online. I teach English to Chinese kids. They’re adding classes. So, that’s a demand.”

Kalsey has recovered from two serious injuries over the past four years. She suffered a broken talus bone in 2016 and an unrelated injury to her right ankle last year in July.

Kalsey worked her way back from the first ankle injury to win the NCAA Division III outdoor championship in 2017 in her redshirt senior season with a record-breaking vault of 4.22 meters (13-10).

She vaulted in her first USATF Outdoor Championships last year in June and placed 12th with a vault of 4.30 meters (14-1¼).

Kalsey once again worked all the back from an ankle injury when she cleared 4.37 meters (14-4) at the Doc Hale Virginia Tech Elite Meet in early February. She cleared 4.32 meters (14-2) in the same meet, also a personal best.

“That was an all-time high PR for me,” said Kalsey, adding, “I jump 14 feet quite consistently.

“I have a confidence I’ve never had indoors. I’m getting on bigger poles. It’s unusual. I don’t peak indoors.”

Kalsey continued the thought, adding, “When you jump those heights, when I cleared 14-4, it was so rewarding.”

Understandably, Kalsey was looking forward to the outdoor season so she could clear the U.S Olympic Trials qualifying standard of 4.60 meters (15-1).

The Olympic Trials were to be at Hayward Field in Eugene, Ore., on June 19-28, but the USATF announced Tuesday the meet has been postponed.

The USATF release stated: “This morning, the International Olympic Committee announced its decision to postpone the 2020 Olympic Games due to the spread of novel coronavirus (COVID-19). TrackTown USA is now working with our partners at USA Track & Field and the U.S. Olympic & Paralympic Committee on rescheduling the U.S. Olympic Team Trials – Track & Field. Although it is not yet clear how long it may take to finalize a new date for the event, our Local Organizing Committee stands ready to welcome the best athletes in the country to the University of Oregon’s Hayward Field once a decision is reached.”

“I need as many meets as I can, as many opportunities as I can get. The top vaulters, not as much. They peak when they can,” explained Kalsey. “It’s disappointing there will be less meets, but it’s out of our control.”

Kalsey also has to consider her life outside of vaulting. She’s engaged, but has decided with her fiance Dylan Thomas to hold off marriage until their lives are situated.

“I’m happy we decided to do what we’ve done. We decided to wait until we’re for sure together. He still lives and works in Pennsylvania. I don’t want to be a distance relationship seven hours apart,” explained Kalsey, who trains in Tennessee. “We’re not in a hurry. We both know what we want.”

But, the chance to shine on the world stage still drives Kalsey’s training and approach to her sport.

“My goal, I would love to go to the Olympics, but I have to take it step-by-step. I need (to clear) 8, 9 more inches. I can still go up from what I’ve done,” said Kalsey. “I’m optimistic. I usually peak in outdoors. Now I feel 4.60 meters is there. Everything needs to line up. It feels I already have it in the bank.”

Kalsey hopes the IOC and organizing committee will soon determine an alternative date so she can plan out her training, but appreciates the difficulty of making such a monumental decision.

“Within the next three months would be ideal,” said Kalsey. “As soon as possible, of course.

“It’s not the easiest thing. It’s especially difficult for those who qualified and had the relief of making it. But, most of the athletes were on the same page (for a postponement) to keep everyone safe.”

Kalsey related sage advice from a teammate (and Olympian) on how to approach the whole process, especially given current national and international events.

“You have to remember every moment of it. It’s not so much about the destination, it’s the journey. Enjoy the moments,” said Kalsey, adding, “My life is not all about pole vaulting.”

Do you think people should be taking the stay-at-home order more seriously?