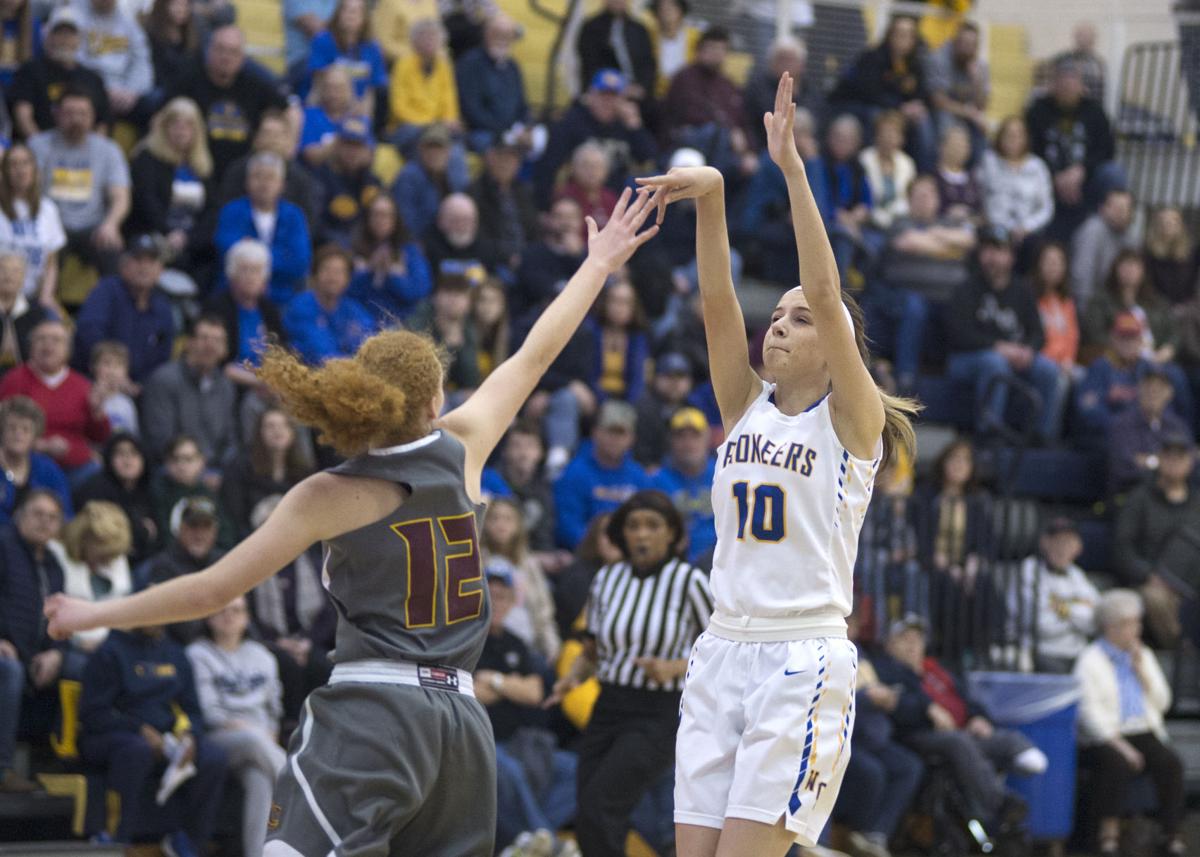 West Greene’s Kaitlyn Rizor (10) makes a 3-pointer over the defense of Kennedy Catholic’s Addie Flanders during their PIAA Class A first round playoff game at Canon-McMillan High School on March 9. (Photo by Celeste Van Kirk) 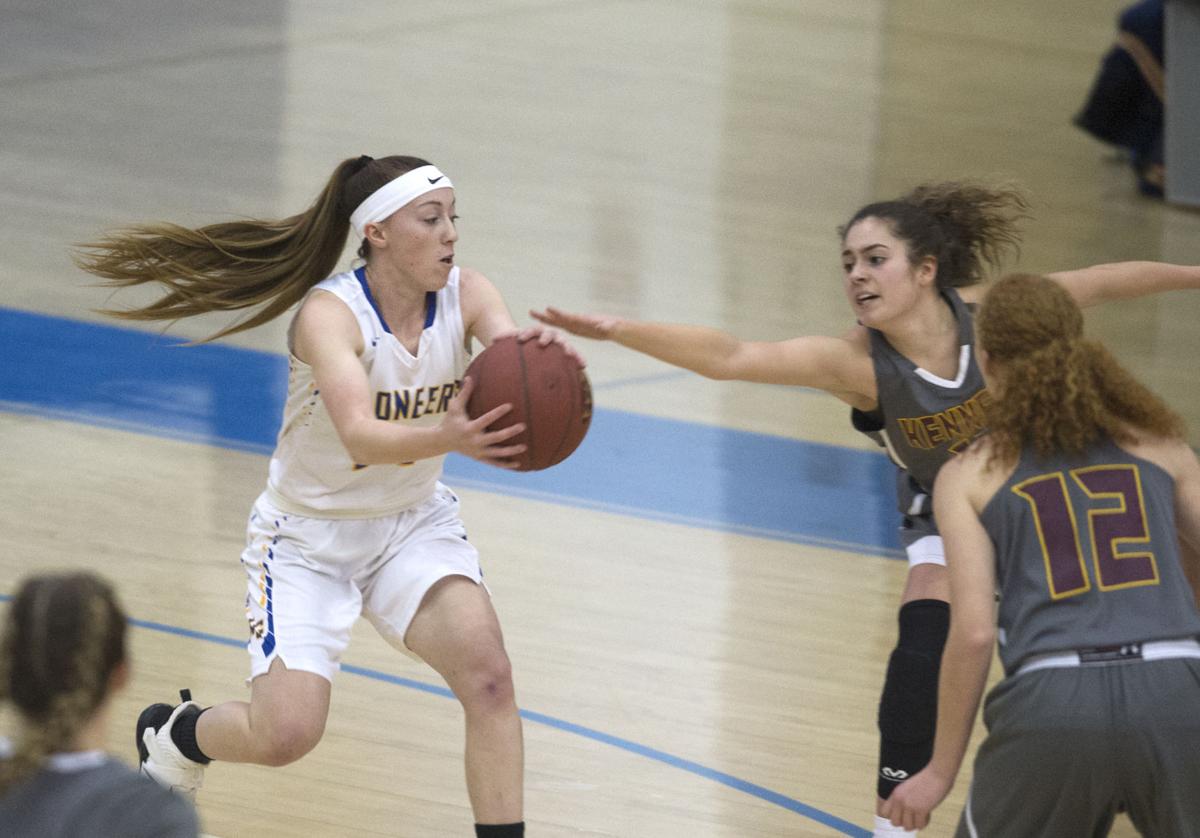 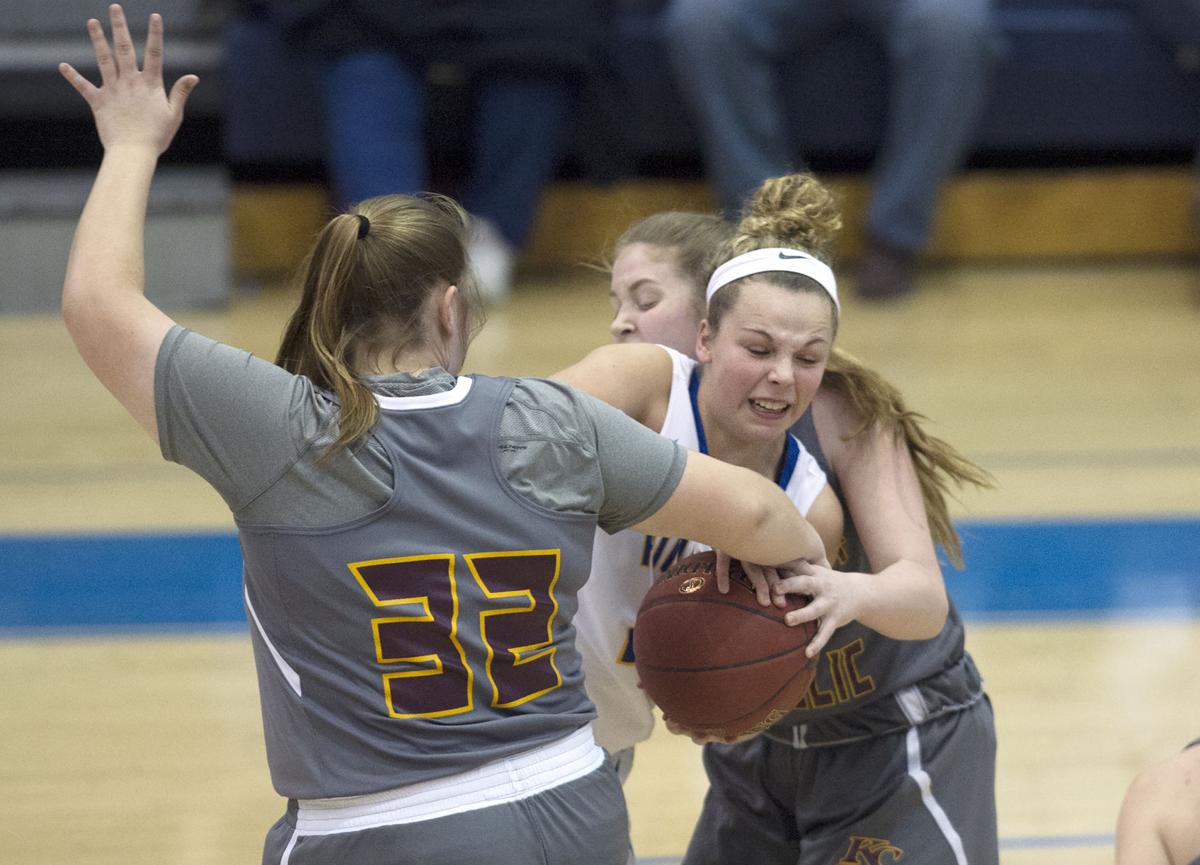 West Greene’s Brianna Goodwin fights for the rebound against Kennedy Catholic’s Andrea Suhar (32) and Bellah DiNardo in the first round of the PIAA Class A basketball playoffs at Canon-McMillan High School on Saturday. 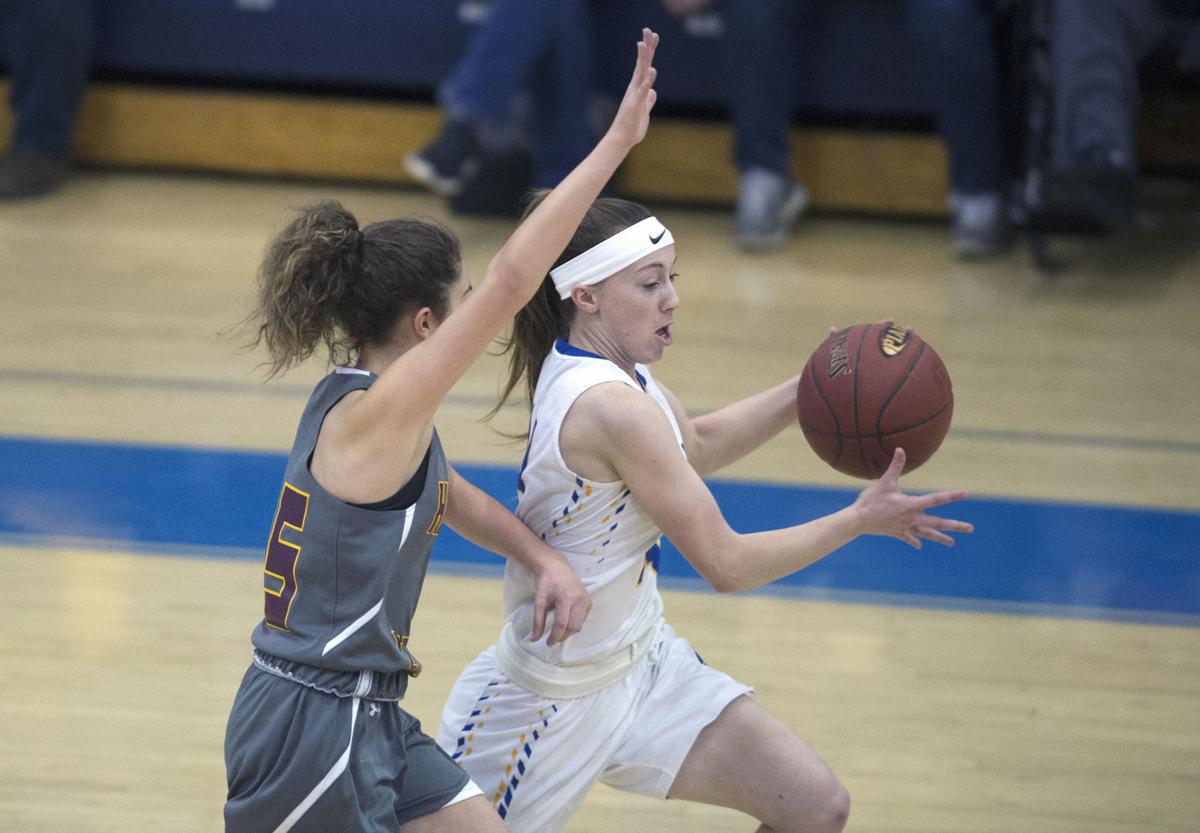 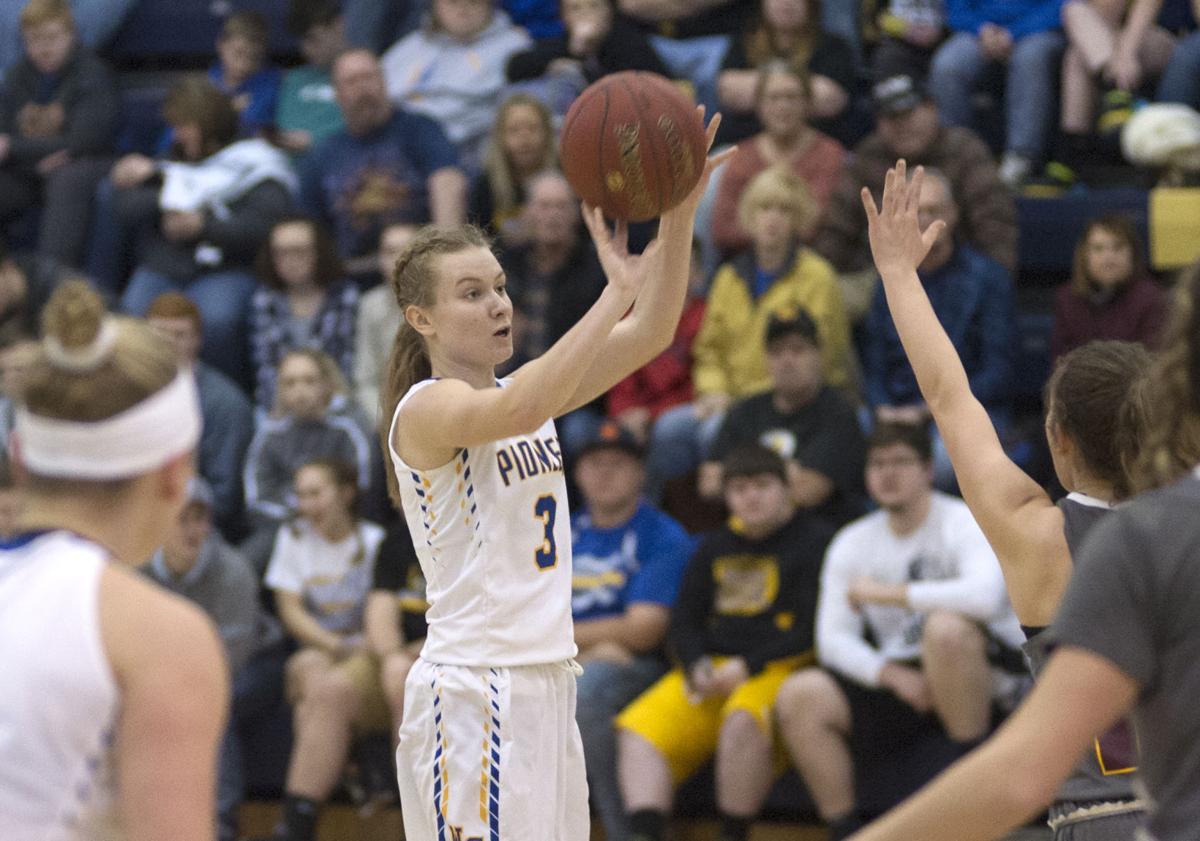 West Greene’s Kaitlyn Rizor (10) makes a 3-pointer over the defense of Kennedy Catholic’s Addie Flanders during their PIAA Class A first round playoff game at Canon-McMillan High School on March 9. (Photo by Celeste Van Kirk)

West Greene’s Brianna Goodwin fights for the rebound against Kennedy Catholic’s Andrea Suhar (32) and Bellah DiNardo in the first round of the PIAA Class A basketball playoffs at Canon-McMillan High School on Saturday.

CANONSBURG — The West Greene girls basketball squad had their worst quarter of the season in the opening eight minutes of their PIAA Class first round contest.

Despite a valiant comeback effort and making it a two-possession game twice late in the game, the Lady Pioneers saw their season and sensational run end with a 63-56 loss to District 10 champion Kennedy Catholic Saturday afternoon at Canon-McMillan High School.

The Lady Golden Eagles (18-6) scored the opening nine points of the game and led 16-3 at the end of the first period.

“It was our worst quarter of the year, by far,” West Greene coach Jordan Watson said. “We never shoot that bad and nothing was going in for us. We were stagnant on offense and settled for outside shots. I thought we defended well in the opening quarter, but our offense struggled.”

Malia Magestro came into the game as advertised for Kennedy Catholic, who will play the winner of Berlin-Avella game in the second round on Wednesday, finishing with a game-high 34 points.

The Youngstown State recruit entered the game averaging 28.8 points per game. She did most of her damage in the first quarter (11) and in the final quarter (15).

“She’s just a great player,” Watson said. “She can handle the ball well and she does a good job of moving without the ball. Once she’s pass that half-court line, she is able to shoot it. She’s probably the best player we faced all year. We tried to front her as much as we could and limit her touches, but she was able to get open and find her shots.”

Kennedy Catholic opened the third quarter with a 13-7 spurt to push its lead to the largest of the game, 44-25, but West Greene responded in a big way in the late stages of the quarter.

Kaitlyn Rizor and Brooke Barner hit 3-pointers, and Rizor added another late basket in the final seconds to cut deficit down to 44-33 heading into the fourth quarter.

Elizabeth Brudnock added a basket sandwiched between a pair of foul shots by Magestro to start the final quarter, but then West Greene rattled off a 7-3 run that was capped off by a trey from McKenna Lampe that made the score 49-42.

The Lady Golden Eagles countered with eight of the next 11 points, before a 3-pointer by Madison Lampe and a jumper by Rizor made things close once again.

After a free throw by Leah Lombardi, who finished with 13 points, stretched Kennedy Catholic’s lead to 58-50, Madison Lampe hit a shot from beyond the arc to make it a two-possession game with 1:09 remaining.

The Lady Golden Eagles made 3-of-4 shots from the free throw line, but Brudnock fired another three and West Greene called a timeout trailing 61-56 with 11 seconds left.

“I just love the fight of our girls in the second half,” Watson said. “We could have easily packed it in and put our heads down. They fought their way back into the game and showed so much effort in those final three quarters. They never gave up.”

McKenna Lampe scored 18 points for the Lady Pioneers and Rizor chipped in with 12.

Magestro scored the final two points of the contest from the free throw line to secure the state playoff win. Kennedy Catholic has won its district the last the nine seasons and has advanced to the quarterfinal round seven times in the span.

Kennedy Catholic went 13-for-24 at the free throw line in the final eight minutes, while Magestro made 11 of her 16 shots at the charity stripe in the fourth.

“I could never have imagine this type of run by those seniors four years ago,” Watson said. “They have done a lot on the court and they have all the talent in the world, but overall they are just good people. They have meant so much to this program and to this community.”

Despite losing those seniors, the future is still bring for the Lady Pioneers.

“We have no juniors, but a lot of our sophomores and freshmen this year saw playing time,” Watson said. “The cupboard is not bare by any stretch, and we have to work harder in the off-season. I like what we have coming back with our top four, we just have to work on our depth.”