Waynesburg Central players, including Clara Paige Miller (22), Josie Horne (20), Nina Sarra (3) and Brenna Benke (21), celebrate from the bench as their teammates finish off a 54-19 victory over visiting East Allegheny in a WPIAL Class 3A first round playoff game Wednesday. Waynesburg scored the game’s final 33 points. 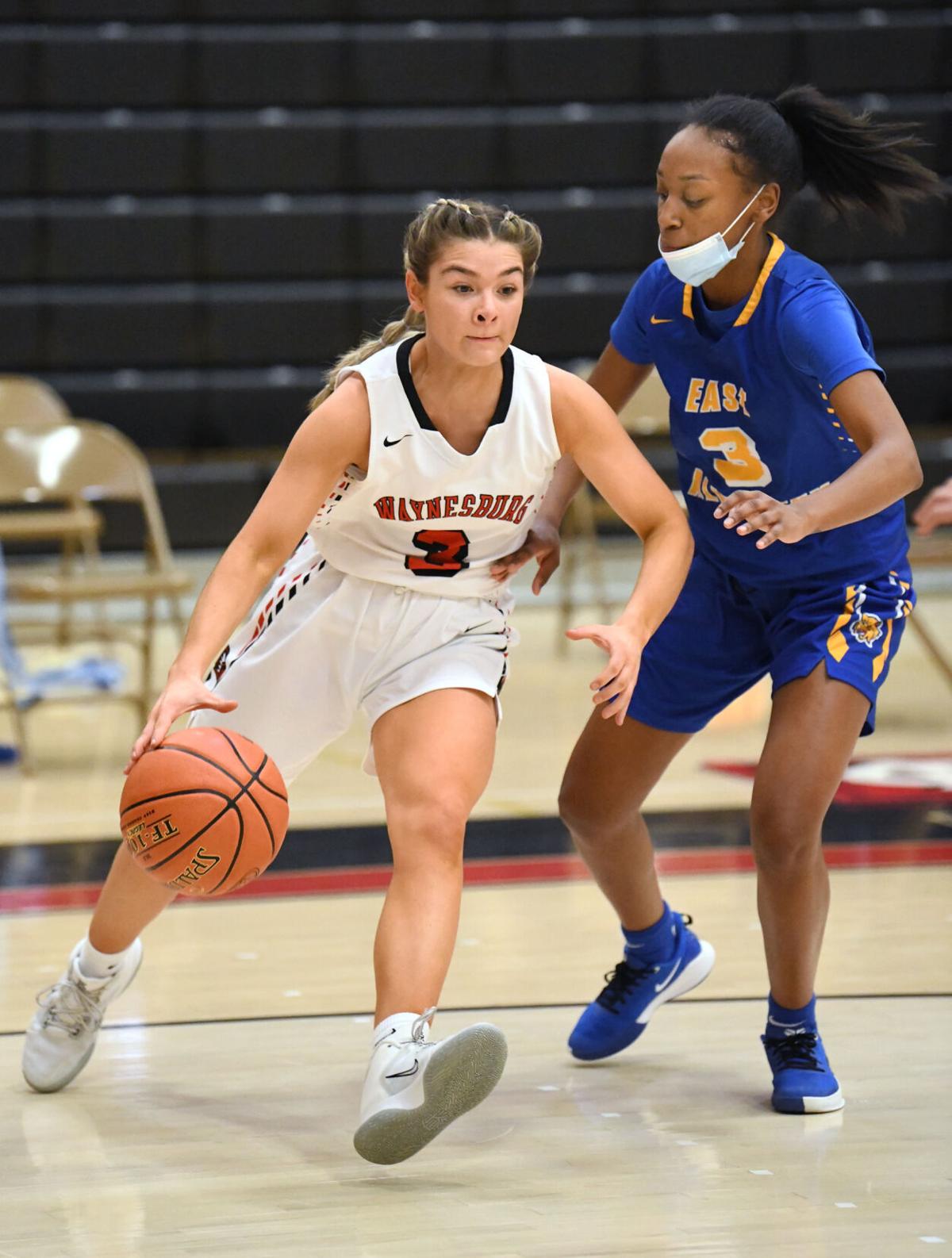 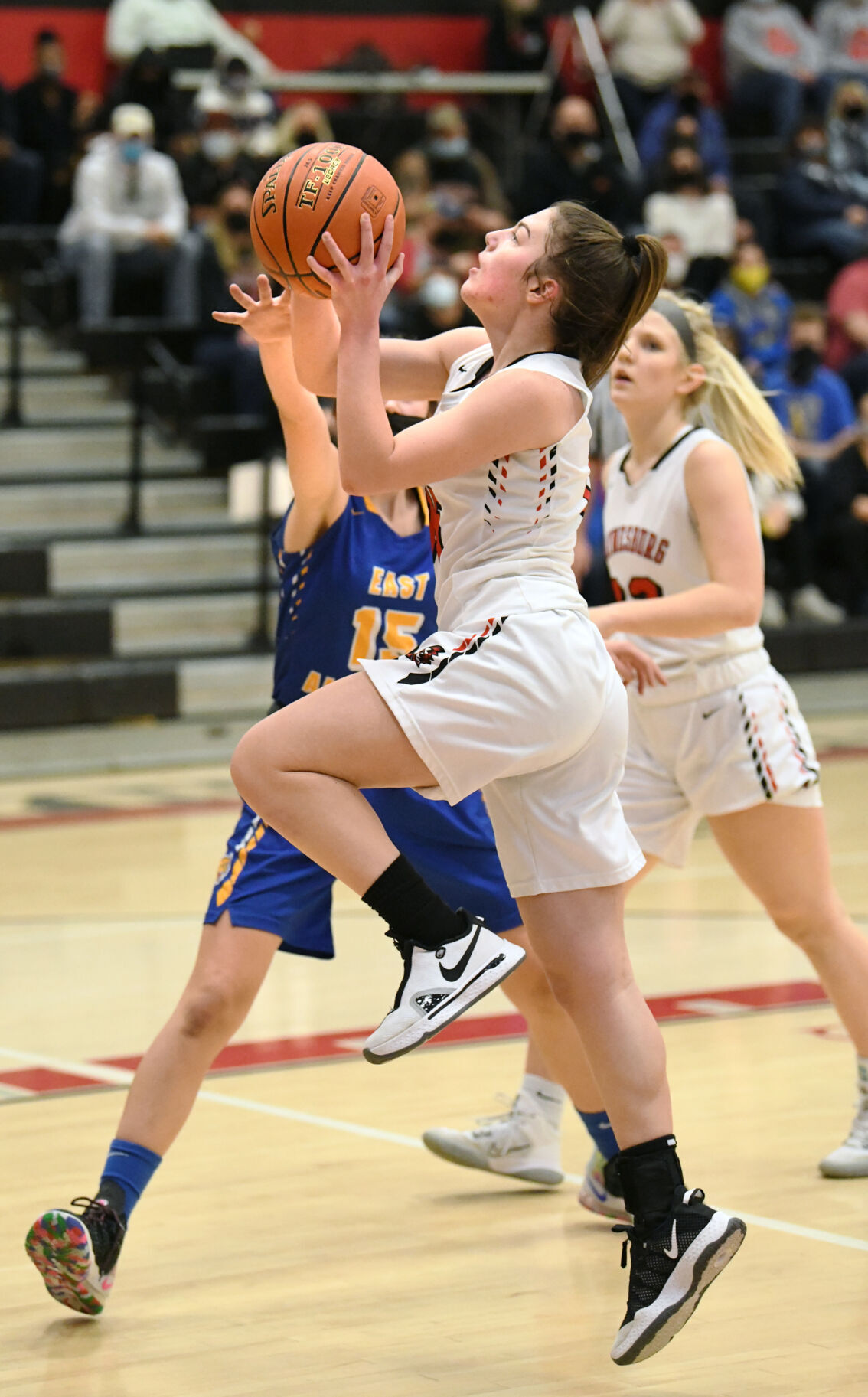 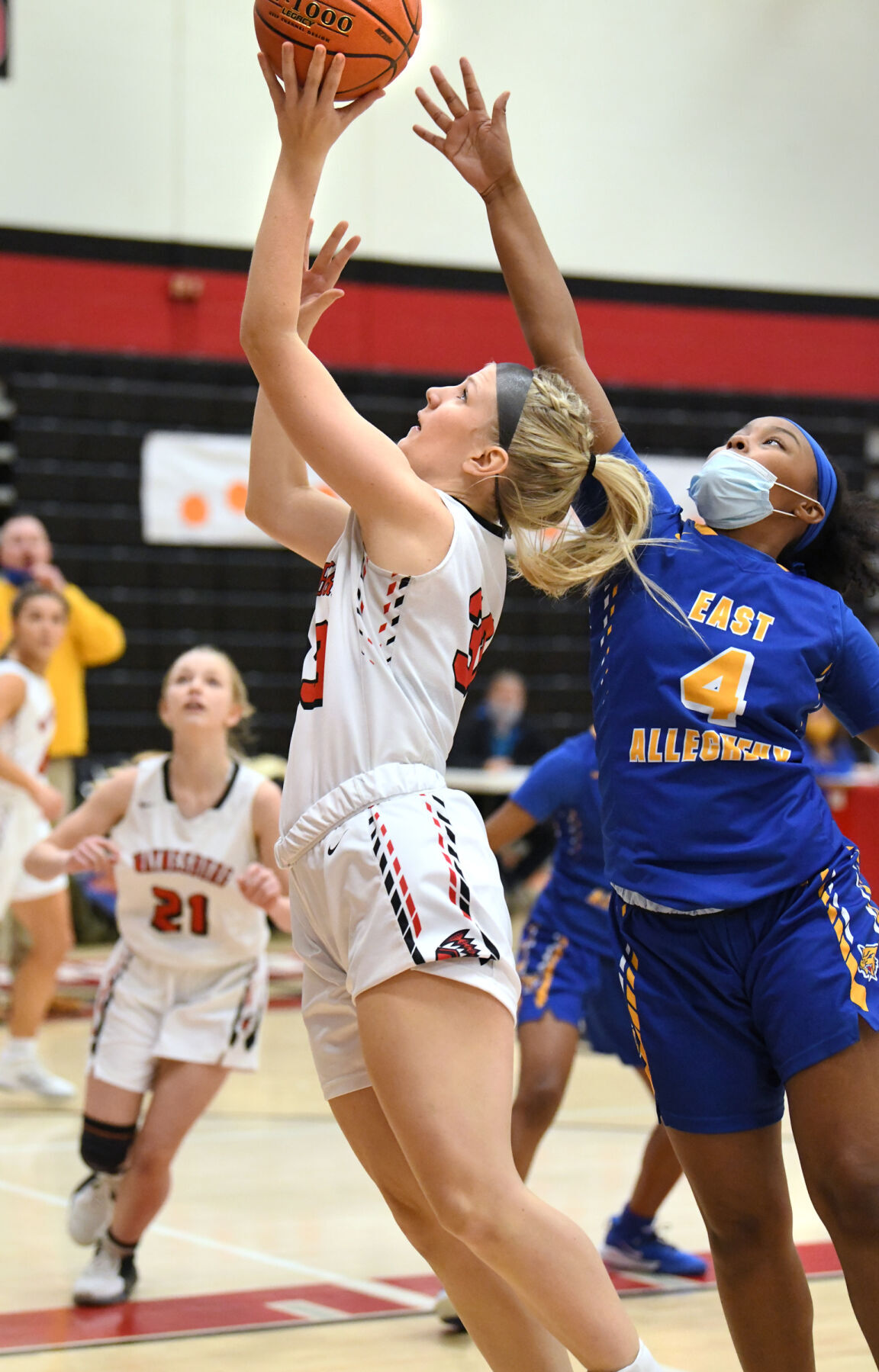 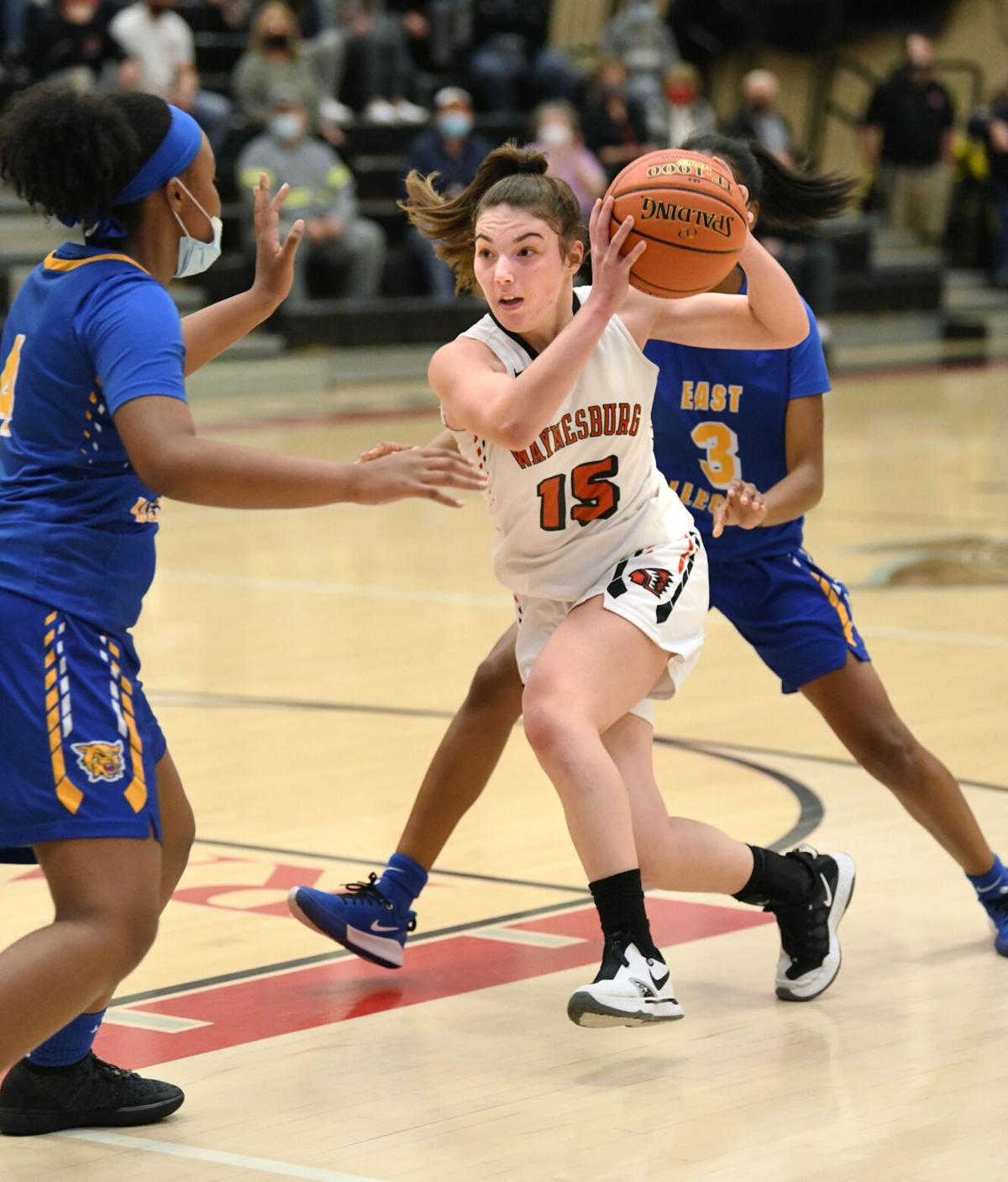 Waynesburg Cenral’s Kaley Rohanna looks for a lane as she drives through the East Allegheny defense during a WPIAL Class 3A first round playoff game at Waynesburg on March 3. Rohanna was named to the Greene County Messenger All-Country Girls Basketball First Team. (Photo by Mark Marietta)

Waynesburg Central players, including Clara Paige Miller (22), Josie Horne (20), Nina Sarra (3) and Brenna Benke (21), celebrate from the bench as their teammates finish off a 54-19 victory over visiting East Allegheny in a WPIAL Class 3A first round playoff game Wednesday. Waynesburg scored the game’s final 33 points.

Waynesburg Cenral’s Kaley Rohanna looks for a lane as she drives through the East Allegheny defense during a WPIAL Class 3A first round playoff game at Waynesburg on March 3. Rohanna was named to the Greene County Messenger All-Country Girls Basketball First Team. (Photo by Mark Marietta)

WAYNESBURG — Basketball coaches like to talk about the value of having a go-to player who can carry a team on offensive. That describes East Allegheny High School’s girls team and its talented senior forward Abby Henderson, who has almost 1,300 career points.

At Waynesburg Central, they don’t have a go-to player. The Lady Raiders value balanced scoring, ball movement, quality depth and grinding out victories.

In the first round of the WPIAL Class 3A playoffs Wednesday night, the grinders were too much for the team with the most talented player on the court.

Waynesburg took advantage of Henderson fouling out and ended the game on an unthinkable 33-0 run to beat East Allegheny, 54-19.

The win sends sixth-seeded Waynesburg (13-5) to the quarterfinals Saturday against 14th-seeded Beaver Falls (6-13), which upset No. 3 Brentwood, 47-44. The game will be played at Waynesburg. Tipoff is noon.

Against East Allegheny (7-7), Waynesburg was slowed to a crawl for three quarters while trying to stop Henderson, who scored 17 points — all but two of East Allegheny’s total and two under her regular-season scoring average. The Lady Raiders played both a straight zone and a diamond-and-one against Henderson, but the Wildcats were still within 18-15 at halftime.

“We knew what a tremendous player she is,” Waynesburg coach Dave Sarra said. “When she was a freshman, we played in the same section as East Allegheny. We knew she could play inside and outside. It was frustrating that we were playing in front of her and behind her and still couldn’t stop her.”

Waynesburg simply had to outscore Henderson, who was playing with a thigh injury. The Lady Raiders did that behind freshman Kaley Rohanna, who had a game-high 18 points, and Clara Paige Miller, who had another steady game and contributed 17 points. Josie Horne came off the bench and played some sticky man-to-man defense on Henderson, Riley Morehead snagged a team-high seven rebounds and eight different Lady Raiders were in the scoring column.

“I’ll take my team,” Sarra said when asked if he’d rather have one big scorer or a team with a balanced attack.

Waynesburg led 11-8 after one quarter before East Allegheny took its only lead of the game at 15-14 midway through the second quarter after a three-pointer by Henderson.

The Lady Raiders used a floater from eight feet by Miller and a 15-foot jumper by Rohanna to forge an 18-15 halftime lead.

Two baskets by Henderson in the opening three minutes of the second half pulled EA to within 21-19, but the Lady Wildcats would not score over the game’s final 13 minutes. Henderson drew her fourth foul with 1:02 left in the third quarter and Waynesburg leading 31-19. Her fifth foul came 66 seconds into the fourth quarter.

“We wanted to get her into foul trouble. That was out plan,” Miller explained. “She’s the tallest and most-skilled post player we’ve played against. We saw her on film and knew we couldn’t back down.”

East Allegheny had only seven players in uniform. The Lady Wildcats were without their starting point guard, who did not make the trip. Without Henderson there was nobody left to contribute points. With Henderson on the floor, Waynesburg held a 31-19 scoring edge. With Henderson on the bench, the Raiders outscored EA by a whopping 23-0 margin.

“Without our point guard, Abby had to bring the ball up the court, then we couldn’t get it to her in the places we wanted,” East Allegheny coach Mike Osiecki said.

With East Allegheny missing both its point guards and Henderson, Waynesburg turned up the defensive pressure in the fourth quarter, forcing a flurry of turnovers and a faster pace. The Raiders outscored East Allegheny 22-0 in the final period.

Sarra said he didn’t know when Waynesburg last won a girls basketball playoff game but was going to check the archives. Miller added that she likes the experience of winning in the postseason and knows a good thing when she sees it.

“This feels good. We’ve worked hard in the offseason the last two or three years and it’s nice to see all that hard work pay off,” she said.