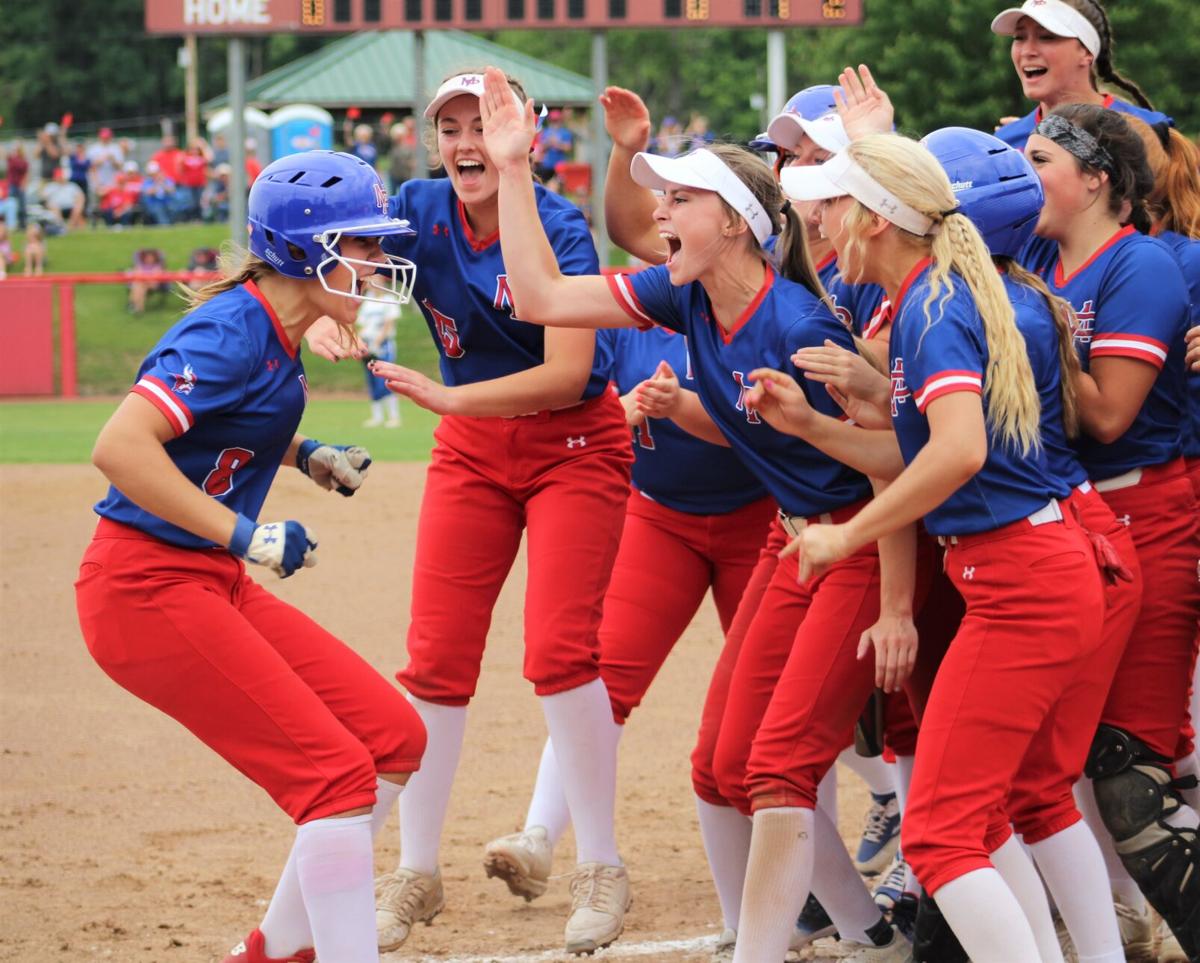 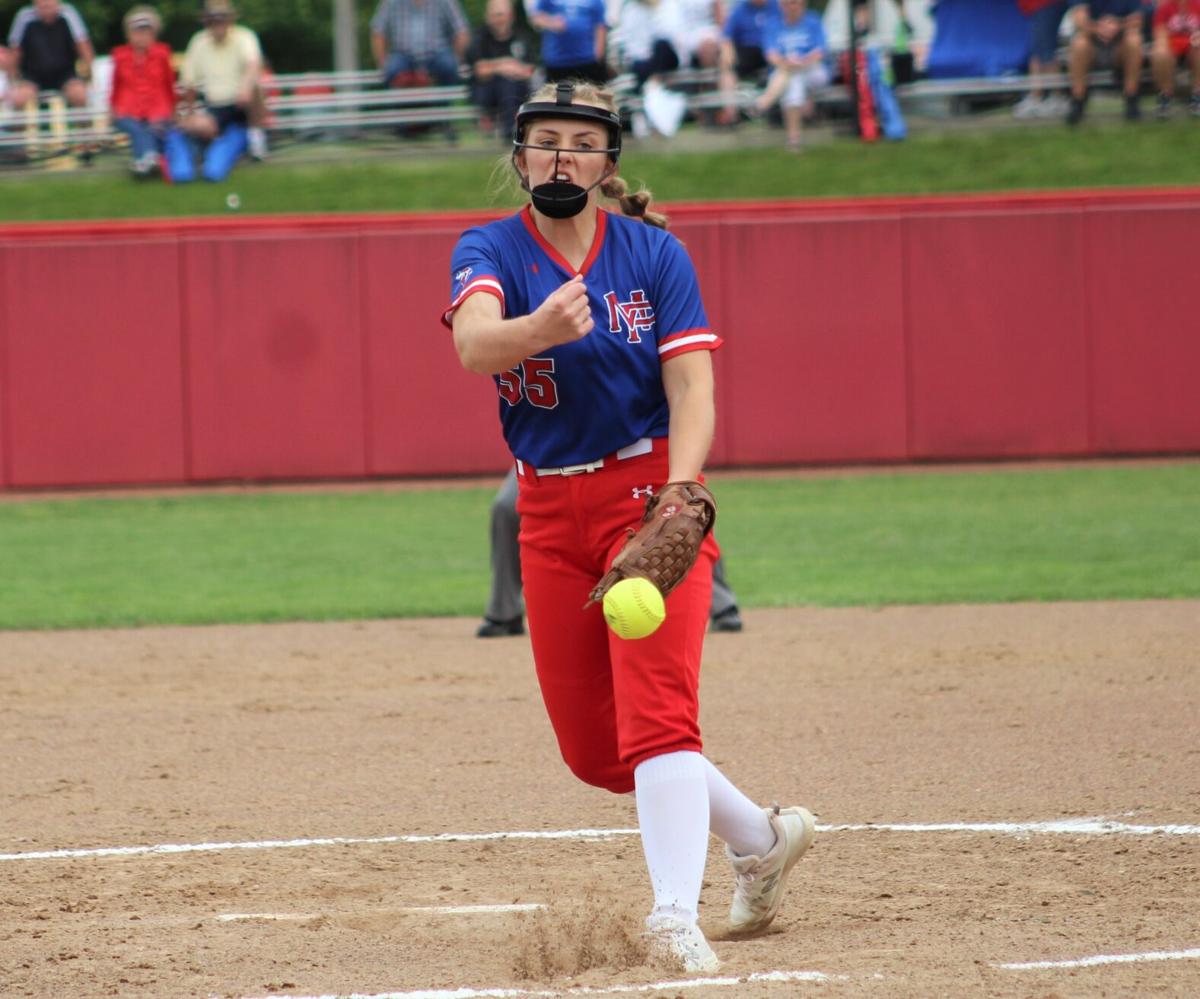 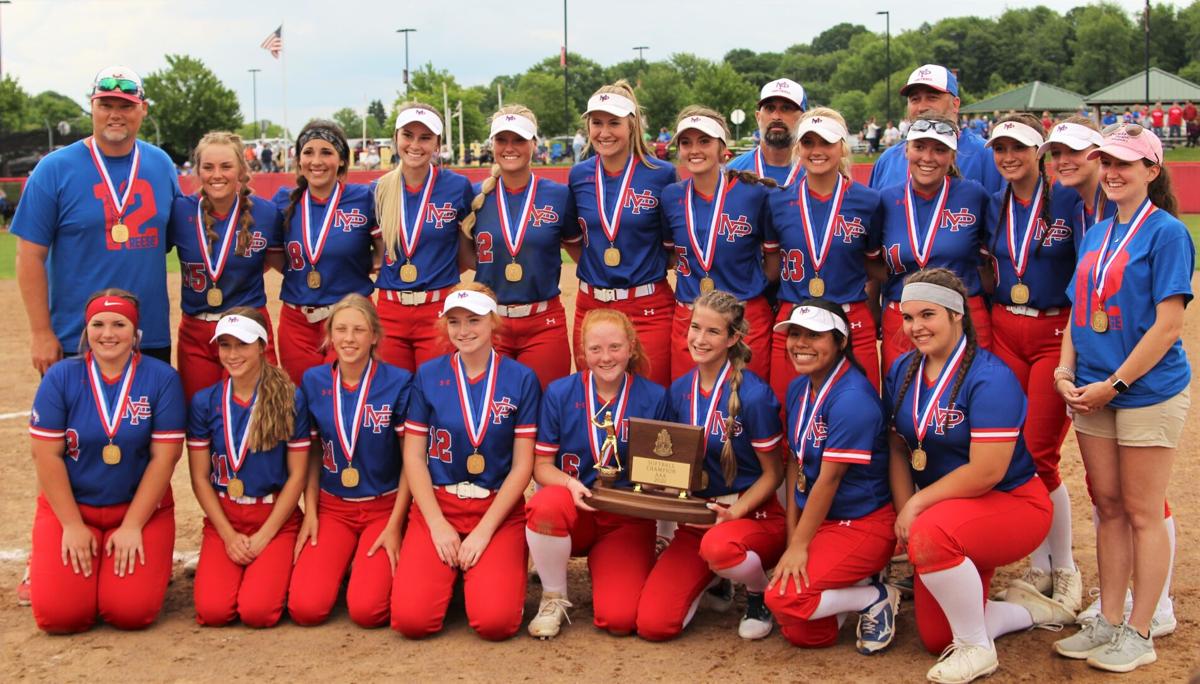 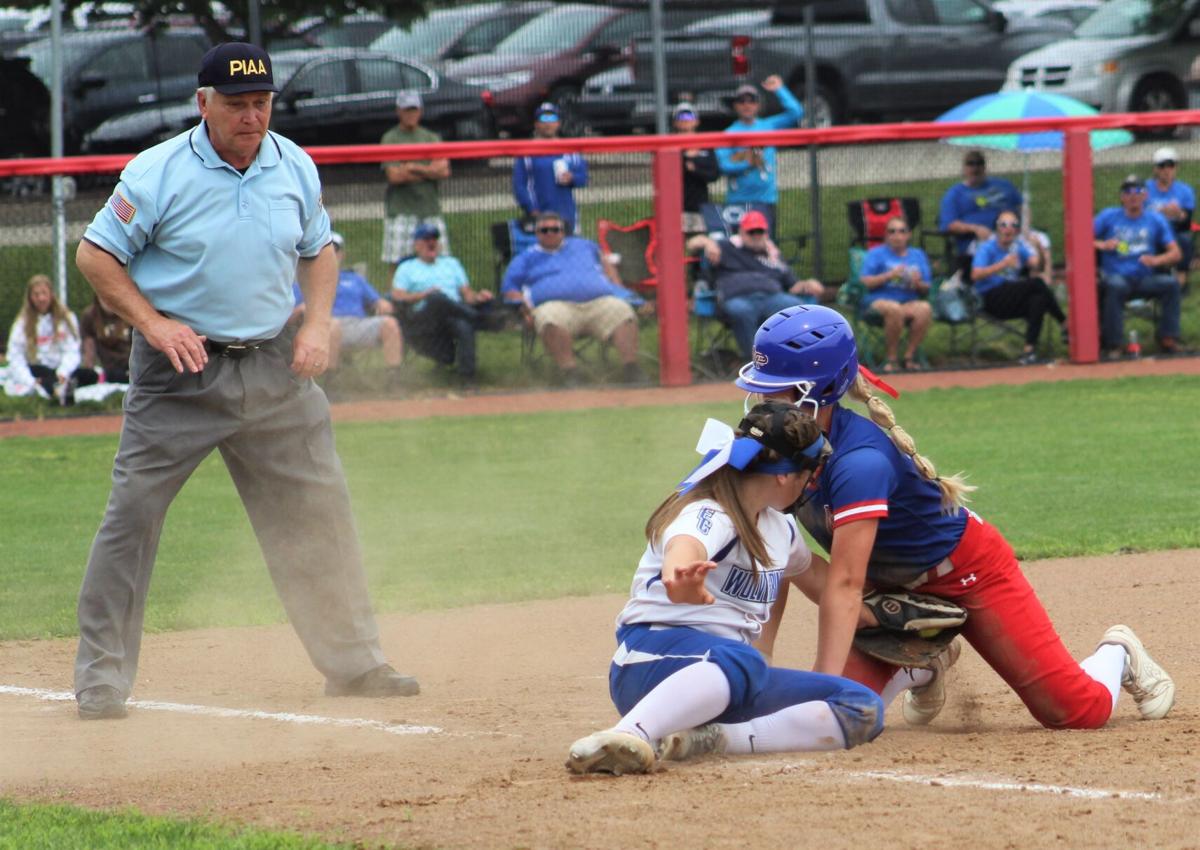 Mount Pleasant’s Haylie Brunson beats the tag by Ellwood City’s Aliya Garroway to take third base on a wild pitch in the top of the first inning of Wednesday’s WPIAL Class AAA Championship at Cal U’s Lilley Field. 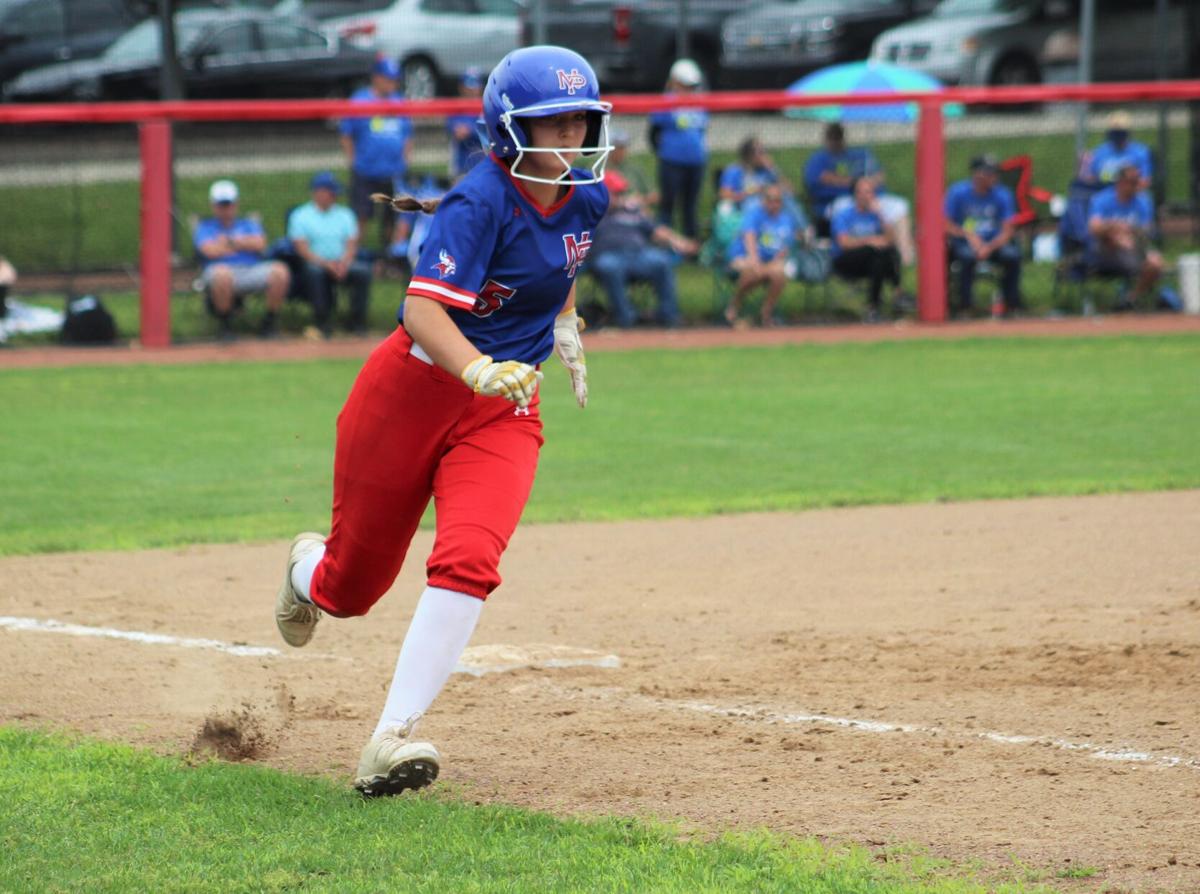 Mount Pleasant’s Sophie Smithnosky sprints for home to score a run in the top of the second inning during Wednesday’s WPIAL Class AAA Championship against Ellwood City at Cal U’s Lilley Field.

Mount Pleasant’s Haylie Brunson beats the tag by Ellwood City’s Aliya Garroway to take third base on a wild pitch in the top of the first inning of Wednesday’s WPIAL Class AAA Championship at Cal U’s Lilley Field.

Mount Pleasant’s Sophie Smithnosky sprints for home to score a run in the top of the second inning during Wednesday’s WPIAL Class AAA Championship against Ellwood City at Cal U’s Lilley Field.

CALIFORNIA — Mount Pleasant needed two seasons, but the Lady Vikings were able to come back from a tough loss in the 2019 district final to be on the right side of the score for the 2021 WPIAL Class AAA Softball Championship.

The Lady Vikings (17-3) advance to the PIAA playoffs as the top seed from District 7 and will play the second place team from Region 2 (Districts 5 and 6).

Ellwood City (14-5) will play either the top seed from District 8 or 9 in the first round of the state playoffs.

Mount Pleasant lost two playoff games in 2019, both to Elizabeth Forward. The Lady Vikings fell in the WPIAL Class AAAA final, 3-0, and lost to the Lady Warriors in the state semifinals, 2-1.

Those losses stuck with coach Chris Brunson and his returning squad, especially with the lost season to the coronavirus.

“The 2019 loss made them hungry,” said Brunson. “Losing two years ago really chewed on these girls. They weren’t going to lose.”

“(The lost season last spring) brought us closer. The friendships brought us so close,” said senior Courtney Poulich, who missed the 2019 final with a hamstring injury. “(Winning) means so much.”

“It hurt a lot to lose that game,” said Smithnosky. “We saw what the losing side was and we did not want to be there.

“I’m grateful for every one of my teammates.”

Mount Pleasant was the team to beat entering the playoffs.

“It’s really hard running out front the whole season. I was waiting for these girls to put it all together and show what they can do,” said Chris Brunson. “Today, we put it together. We played defense, pitched well and hit the ball.”

Well, the Lady Vikings showed early they had no intentions of losing this game by batting around in the top of the second inning to build a 2-0 lead into a 9-0 advantage.

Haylie Brunson’s double, one of 10 smacked by the Lady Vikings, and Mary Smithnosky’s run-scoring ground out gave Mount Pleasant the early lead.

Mary Smithnosky kept the run of doubles alive to drive home Brunson and advanced to third on an error. Poulich broke the doubles string with a long home run to center field.

“It was awesome,” Poulich said of her home run. “Everyone did such a great job to get on base ahead of me.

“I was just trying to get connected with the ball.”

Hannah Gnibus kept the inning alive with a single and a stolen base. Lexi Shawley grounded out, but Sophie Smithnosky’s single brought home Gnibus.

“When you get to this point, you play the best of the best. The game plan was to get to them early,” said Chris Brunson. “They are a young lineup.

“Our lineup is pretty deep, one through nine. We were waiting for it to happen.”

Brunson continued the thought, adding, “We stressed in batting practice to hit the ball the other way and in the gaps. Doubles are our thing.

“Everyone contributed offensively at different times.”

The Mount Pleasant lead grew to 12-0 in the fourth inning on an RBI ground out by Shawley, a run-scoring double from Sophie Smithnosky and an RBI double by Krista Brunson.

The Lady Vikings capped the offensive performance with three runs in the top of the fifth inning. A single and error put runners at second and third with one out, and both came home on Shawley’s single.

Sophie Smithnosky followed with an RBI triple to finish a home run shy of hitting for the cycle.

“Just give to the team whatever you role is,” said Chris Brunson.

Angie Nardone opened the bottom of the first inning with a single, but Mary Smithnosky then retired the next nine batters in order.

Kyla Servick broke the string with a single to start the fourth inning and moved to second on a passed ball. Servick stayed put with three consecutive fly ball outs to right fielder Krista Brunson.

Julie Nardone opened the bottom of the fifth inning by working Mary Smithnosky for her only walk of the game. Makinley Magill grounded into a force play at second base, and stayed at first with another catch by right fielder Brunson and a strikeout.

“Mary maybe was not as sharp as she has been in the last two games,” said Chris Brunson. “She did her thing, a shutout is a shutout, and a two-hitter.”

“I’ve been coming off hot the past two games. It wasn’t nerves today,” said Mary Smithnosky.

The Lady Vikings now look to keep the momentum rolling for a run through the PIAA playoffs.

“Obviously, we’ll take it game by game,” said Poulich. “We just have to keep winning. That’s the goal.”