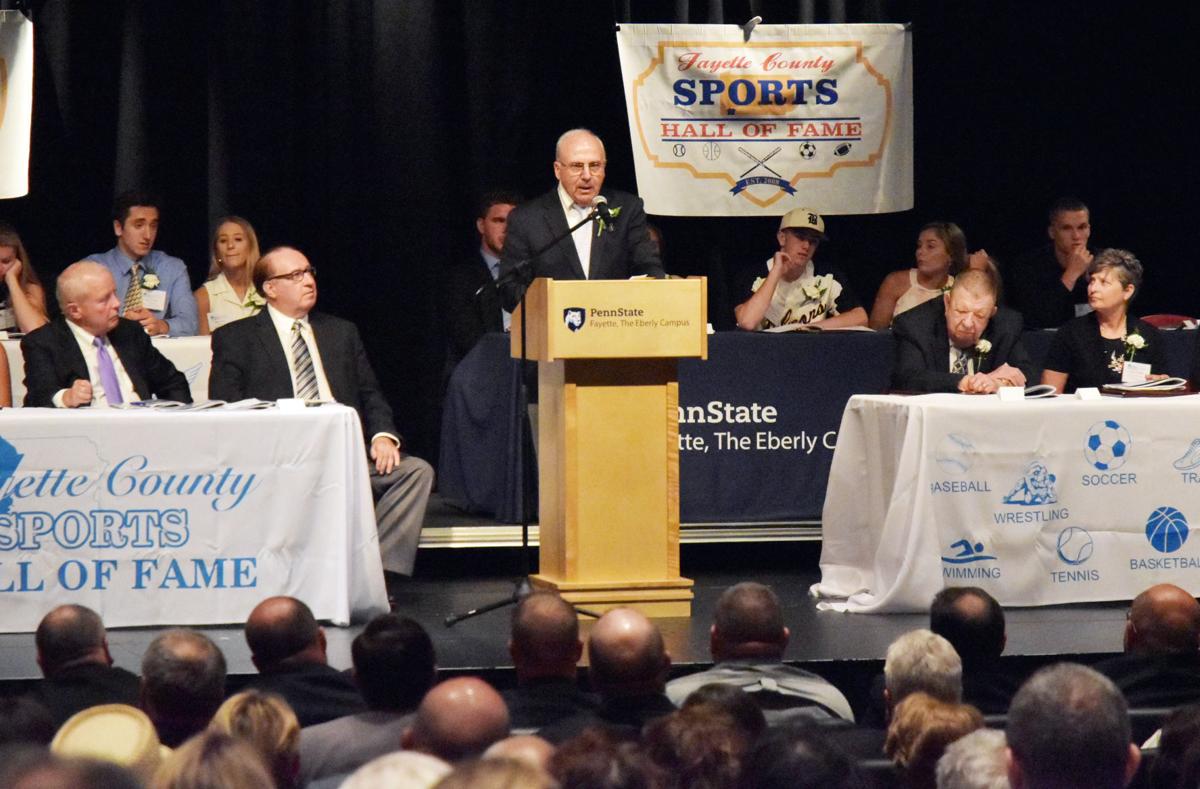 Dan Spanish delivers the acceptance speech on behalf of the 1991 Connellsville football team, which was inducted into the Fayette County Sports Hall of Fame during the 2018 banquet at Penn State Fayette, The Eberly Campus. Spanish coached the Falcons to the WPIAL Class AAAA championship. 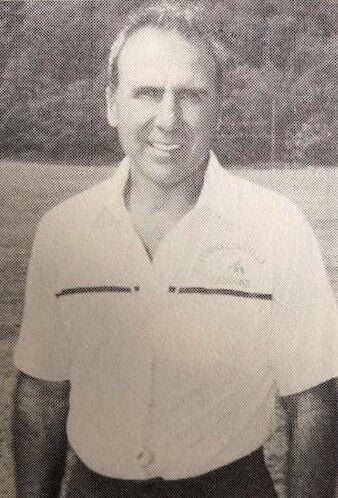 Dan Spanish had a record of 190-111-8 as head football coach at Connellsville. His teams made the WPIAL playoffs 16 times and won 10 conference championships and one WPIAL title. 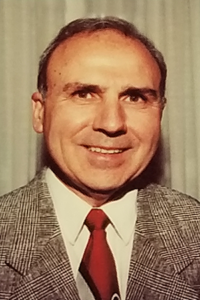 Dan Spanish delivers the acceptance speech on behalf of the 1991 Connellsville football team, which was inducted into the Fayette County Sports Hall of Fame during the 2018 banquet at Penn State Fayette, The Eberly Campus. Spanish coached the Falcons to the WPIAL Class AAAA championship.

Dan Spanish had a record of 190-111-8 as head football coach at Connellsville. His teams made the WPIAL playoffs 16 times and won 10 conference championships and one WPIAL title.

Spanish began his football journey as an outstanding player for Hall of Fame coach Lindy Lauro at New Castle High School. He was on squads that went 7-3 in 1961 and 9-0-1 1962. Spanish who played fullback and end for the Red Hurricane formed a dynamic passing combo with quarterback Ed James.

“I played football, basketball and baseball and also ran track at New Castle,” Spanish recalled. “I was on some good football teams. We had great passing numbers, especially at that time, the passing game was not a big thing back then.

“I was originally a running back and fullback. I switched to wide receiver my junior year and I made 3rd team All State as a junior and second team as a senior as a receiver. I was All WPIAL Class AA as a senior. We played well, but didn’t make the WPIAL playoffs my senior year because of a 19-19 tie against Aliquippa.”

Spanish had a great relationship with coach Lauro.

“He was a very, very good person both on and off the field,” Spanish said.

The 5-foot-11, 185-pound Spanish was nominated for the Big 33 game after graduating from New Castle in 1963. He wound up playing his college football at Kentucky.

“I guess because I made All State in football I backed off on baseball aspirations and I have no regrets on that,” Spanish explained. “I had several schools I visited, Maryland was on the list and I went to Arizona State, Oklahoma State and Kentucky. I decided on Kentucky because to me they were the school that was really interested in me.”

“My sophomore year we went down to Ole Miss and they were ranked No. 1 at the time and we beat them 27-21,” Spanish remembered. “The junior year we were 6-2 and looked bowl bound and lost to Houston and lost our quarterback, Rick Norton, and wound up 6-4.

“It was a good decision to go to Kentucky for a couple reasons. It gave me a learning experience that transferred later on into coaching and I met my wife there.”

When Spanish graduated from Kentucky in 1967 he started looking for coaching and teaching jobs.

“After graduating from UK my mother called and said coach Lauro wanted to talk to me,” Spanish stated. “At that point I had looked at several schools in the Kentucky, Indiana area and he called and asked me if I’d be interested in coming back home, he had an opening on the coaching staff. I thought I could learn from him and at the same time go back to a good program.”

He was an assistant at New Castle for seven years. New Castle won the WPIAL title in 1967 and 1973. The coaching job opened at Connellsville in 1974 and Spanish was picked to be the Falcons head coach and he taught physical education.

“When I was being interviewed at Connellsville, former coach Stan McLaughlin, who was athletic director at the time, I really believe he had a major role in me getting the job,” Spanish said. “I always respected him as a person.”

Spanish took over the Falcons and the rest is history.

He coached to a record of 190-111-8 and took his teams to the playoffs 16 times, winning 10 conference championships. His teams had four undefeated regular seasons and captured one WPIAL championship. He is the only Connellsville football coach to have an undefeated, untied regular season. He is the only coach to win the WPIAL football championship at Connellsville. A large number of his players received college scholarships.

“I think the biggest thing is you go into a school and you start a foundation,” Spanish stated. “The foundation is to get them to understand what you have to do to be successful and we started at square one, and for me that was always the weight room, and then you get into your conditioning.

“Ken Scheffler came with me from New Castle and I developed a good coaching staff. Tom Dolde was a good defensive coach and Dick Witt, Ron Marciante, Gene Cavalier. We built a foundation. We had 22 winning seasons. I enjoyed working with all the young men. They worked hard. I give credit to the players and assistant coaches.”

The 1991 team was special, winning a WPIAL championship. The Falcons finished the regular season 10-0 and wound up with an impressive 13-1 record and earned the school its first and only WPIAL championship. Along the way they picked up the nickname “Country Boys.”

“I think the nickname was more of the time and the music,” Spanish offered. “The Country Boys song and the schools that we played in the Pittsburgh area, the North Hills, we were to them country bumpkins and they just thought we were kids from down in Connellsville and we had a variety. Part of the area is the mountains and you had the city of Connellsville. But they all came together and they had one common goal to win.

“All 29 teams I coached have a special place in my heart.”

Spanish was ousted as Connellsville coach in a contentious 5-4 school board vote on April 9, 2003 after the Falcons had posted a 10-20 record in his final three seasons.

“I was disappointed and have my own ideas about what happened,” Spanish said. “But it happened and its over and done with.”

Connellsville football has paid a steep price since Spanish was dismissed. The Falcons have won 34 games since that time.

Spanish spent three years at California University of Pennsylvania as an assistant after leaving Connellsville.

“My wife retired from teaching and she is originally from Lexington, Kentucky,” Spanish explained. “We moved back to Lexington and the following year our maid of honor called and her grandson was asked to try out to be a kicker at Lexington Catholic High School and they didn’t have a kicking coach and she wanted to know if I’d be interested. At first I thought that I was retired and then I went ahead and called and I wound up coaching 13 years. The last two years I didn’t coach because of COVID-19.”

Spanish, 76, resides in Nicholasville, Kentucky with his wife of 52 years Brenda. They three children, Andrea, Todd and Jaime, and seven grandchildren.

“Football was very good to me,” Spanish stated. “It was a great run.”