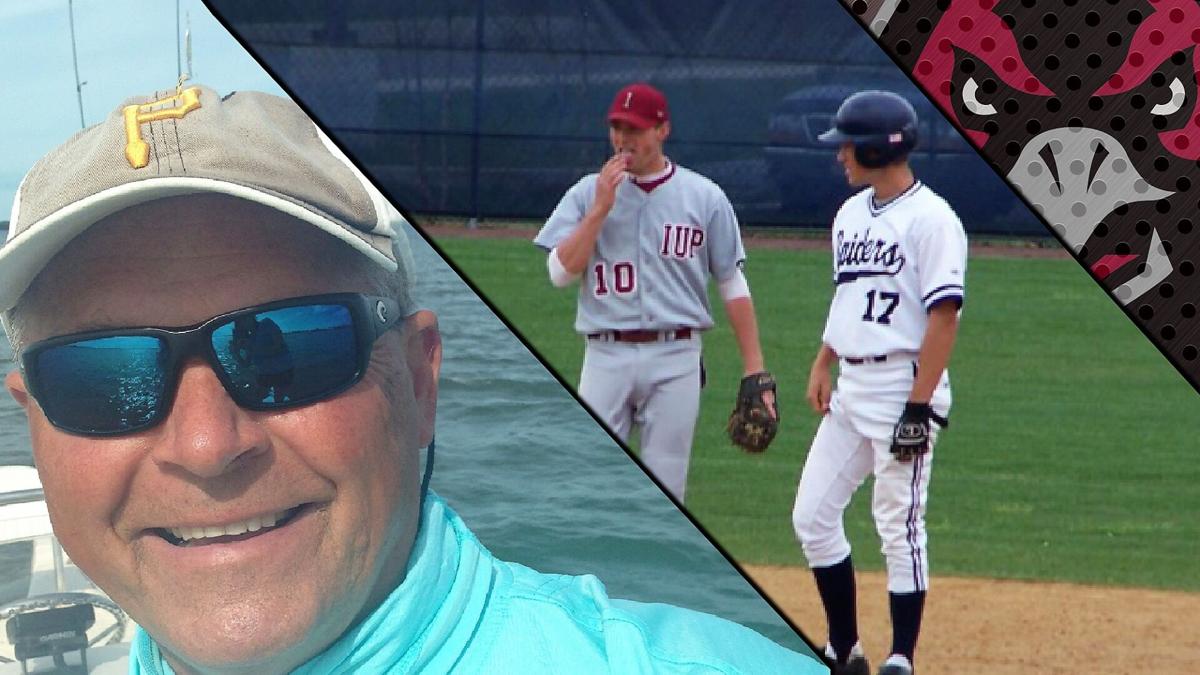 Dennis Miscik is shown in a composite photo presented for his induction into the Indiana University of Pa. Hall of Fame. 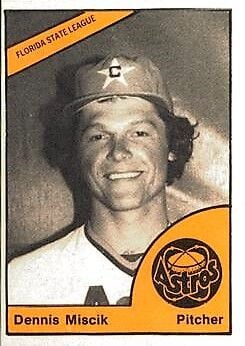 Dennis Miscik is shown on a baseball card during his playing days with the Cocoa Beach Astros.

Dennis Miscik is shown in a composite photo presented for his induction into the Indiana University of Pa. Hall of Fame.

Dennis Miscik is shown on a baseball card during his playing days with the Cocoa Beach Astros.

If you follow Mount Pleasant High School athletics the last name of “Miscik” will be a familiar one. Bob Miscik and his older brother Dennis were both outstanding athletes for the Vikings during the 1970s. We are going to focus in this Memory Lane on the elder Miscik brother Dennis.

“It good to think that we are synonymous with Mount Pleasant and IUP,” Miscik stated.

Dennis Miscik was on a Mount Pleasant football squad that posted a record of 6-3 in 1969. He sat out the 1970 season because of high blood pressure concerns. During Miscik’s senior season in 1971 the Vikings finished with a record of 6-3-1 and were in third place in the Foothills Conference.

“My junior year I had a short-lived problem with high blood pressure,” Miscik reported. “I would get very excited at certain times especially going to the doctor’s office. They eventually found out that it was nothing, but it cost me a year of football my junior year. It was just an unfortunate situation during a period of a couple of months that stopped me from playing my junior year.”

The 6-foot, 195-pound Miscik came back with a vengeance in his senior season and completed 97 of 213 aerials for 1,709 yards and 16 touchdowns. He also carried the ball 60 times for 99 yards ans five touchdowns. Miscik was the Vikings punter and averaged 32.6 yards a kick. He had a couple of monster games in 1971, throwing for 346 yards and three touchdowns against Southmoreland, tossing three more touchdowns against Latrobe and throwing four touchdown passes against Wilkinsburg.

“It was a good year,” Miscik recalled. “We were coached very well by Joe Arrigo and we had a ton of talent on that team. We had four other players in addition to myself that were offered Division-1 scholarships. Both tight ends were offered scholarships — Tom Kostelnik at Kentucky, Ron Fullman Indiana State — fullback Terry Throm, Richmond, and a junior that year, Terry Foriska, received an offer from Tennessee Tech. I was offered by Pitt. We had a lot of good players on that team.”

Miscik was All-Foothills Conference as a senior and honorable mention All-State.

“It was an honor to be recognized like that,” Miscik said. “I was also selected for the Big 33 Game, but I didn’t play because I played in the East-West American Legion All-Star baseball game.”

Mount Pleasant had a pretty sophisticated passing attack for that era of high school football.

“We threw the ball well,” Miscik stated. “Our offensive coordinator Dan Barton was an outstanding coach. We mixed it up and threw the ball 15 to 20 times a game, which was a lot back then.

“I enjoyed playing for the coaches we had. I invited coach Arrigo and Barton to my wedding and it was a good relationship. They were good mentors, coaches and role models.”

Miscik also excelled on the baseball diamond for the Vikings.

“We competed against schools two and three times our size,” Miscik said. “We held our own with them. I was a sophomore when we won the WPIAL title in 1970 at Forbes Field. We beat Bethel Park and their great pitcher Bob Purkey, 4-2. I was a first baseman and we had Bob Gorinski, who was a first-round pick in the baseball draft by the Minnesota Twins. I was the No. 2 pitcher on that team behind Terry Gesinski, who was a very, very good pitcher. I had a good game on the mound against West Mifflin North to get us into the semifinals. We had a really nice team and beat some good teams on the way to that title.”

Miscik has a great deal of respect for his old baseball coach at Mount Pleasant, Clarence Gorinski.

“Coach Gorinski was a no-nonsense, work hard, be at practice, do your best, keep your mouth shut, do the right thing, follow these instructions, and they were successful,” Miscik said. “He was a very good coach of hitting and a very good coach in general of all aspects of the game. We had some very good years playing under him.

“We got into the WPIAL playoffs when I was a junior and a senior. We were a little bit thinner than we were the sophomore year and we didn’t go as far.”

Miscik was sidelined with a broken collar bone at one point.

“That was the summer after my junior year,” Miscik recalled. “I had a very good junior year in baseball, probably my strongest year. That summer I fell and broke my collar bone and that hurt me for the American Legion season, but I came back for the last third of it and did well.”

“Legion baseball was huge, every bit as huge as high school,” Miscik said. “I was picked up by Bobby and Eddie Gorinski for all the games and practices and we played our games at Frick Park. All the kids who played high school baseball generally played legion ball.”

Miscik played in the American Legion East-West All Star game. He was MVP of the Western Final in Freeport before the East-West game.

Pitt was Miscik’s choice for a football scholarship when he graduated from Mount Pleasant in 1972.

“I had a number of football offers,” Miscik explained. “I visited Notre Dame, I visited Clemson and I was recruited by a number of schools and I liked both sports, football and baseball, the same. I thought I would have a better career and a longer career playing baseball. I was a left-handed pitcher and outfielder/first baseman and there aren’t a great many left-handed quarterbacks. I decided to go the baseball route.

“I wound up at Indiana University of Pennsylvania after I signed a national letter of intent to go to Pitt,” Miscik explained. “I would have had to step down a level if I wanted to play right away. I decided on IUP and coach Arch Moore was a former major league player with the New York Yankees and he had a nice program at IUP.”

His four-year career started with him posting a 5-2 record and striking out 51 to help the Indians win the Pennsylvania State Athletic Conference championship his freshman campaign. Elbow surgery caused him to miss much of his sophomore season.

Never losing more than two games in a season while winning 15, Miscik remains in the IUP record book to this day in top 10 categories in career wins (15), strikeouts (161), and earned run average (1.94). During his senior year, Miscik finished the season with a 0.53 earned run average, which led the nation in NAIA final statistics. That year he surrendered three earned runs, posting a 6-2 record on the mound.

“I came in as a freshman and started immediately,” Miscik said. “I had a nice career for coach Moore at IUP. He had professional contacts. I stayed local, I stayed at IUP and it was a smooth transition.

“I had a real good senior year. I had probably the best year of my career. I had four or five shutouts. I was happy with going to IUP and playing there, it worked out fine.”

Miscik was drafted out of high school by the Cincinnati Reds. Misick was offered a professional contract after his junior year by the St. Louis Cardinals (from scout Tommy Thompson), but turned it down to return to IUP for his senior year. Following his senior season, he was drafted a second time by the Houston Astros in 1976. After the completion of his first season in professional baseball, Misick was named to the Astros’ All-Rookie team. He pitched four seasons in Class AAA for the Astros before being traded to Philadelphia in 1980. After spending two seasons with the Phillies, Miscik signed a free-agent contract with the Pittsburgh Pirates in 1982, finishing his professional career with the Pirates.

He also had the opportunity to play winter ball in Puerto Rico on three separate occasions.

“I played seven years in the minors,” Miscik recalled. “Most of those years in Triple A, but my arm wasn’t what it was after nerve damage during my sophomore year. The Pirates doctor Albert Ferguson did that surgery. I came back at probably 95 percent of what I was. But when you are throwing 90 and now you are throwing 86 or 87 there is a big difference.”

Miscik in seven minor league campaigns compiled a record of 38-42 with a 4.28 ERA. He had two career saves and notched 467 career strikeouts.

“You give it all you have,” Miscik stated. “Not everybody can play in the Major Leagues.”

Miscik retired from baseball after winter ball in 1983. He got into real estate in Salt Lake City, Utah. Eventually he came to Mount Pleasant and took a teaching job in the fall of 1983. He taught health and physical education. He became head baseball coach at Mount Pleasant in 1985-86. He also became an assistant football coach with the Vikings a couple of years later and coached football for 11 years.

Mount Pleasant baseball flourished under Miscik. He had over 250 wins in 19 years and won 10 section titles and was runner-up five times. He had 85 players go on to play in college, 19 in Division I and 35 in Division II.

“I did the best I could and I tried to do the best job I could for my players, Miscik said. “We were successful.”

Miscik was athletic director at Mount Pleasant his last four years there and retired in 2011.

Miscik joined younger brother Bob in the IUP Hall of Fame. Bob was inducted in 1998 and Dennis in 2000.

“It was a great honor,” Miscik said. “Brother Bob got inducted before me. The induction was a thrill and an honor.”

Now 66 years old, Miscik resides in Venice, Florida with his wife of 40 years Karen. They have two sons, Ryan, 38, and Adam, 36. The Miscik’s are blessed with one grandson.

“I’m satisfied with what I accomplished, Miscik said. “I couldn’t do anymore, I gave everything I had. I have no regrets.”