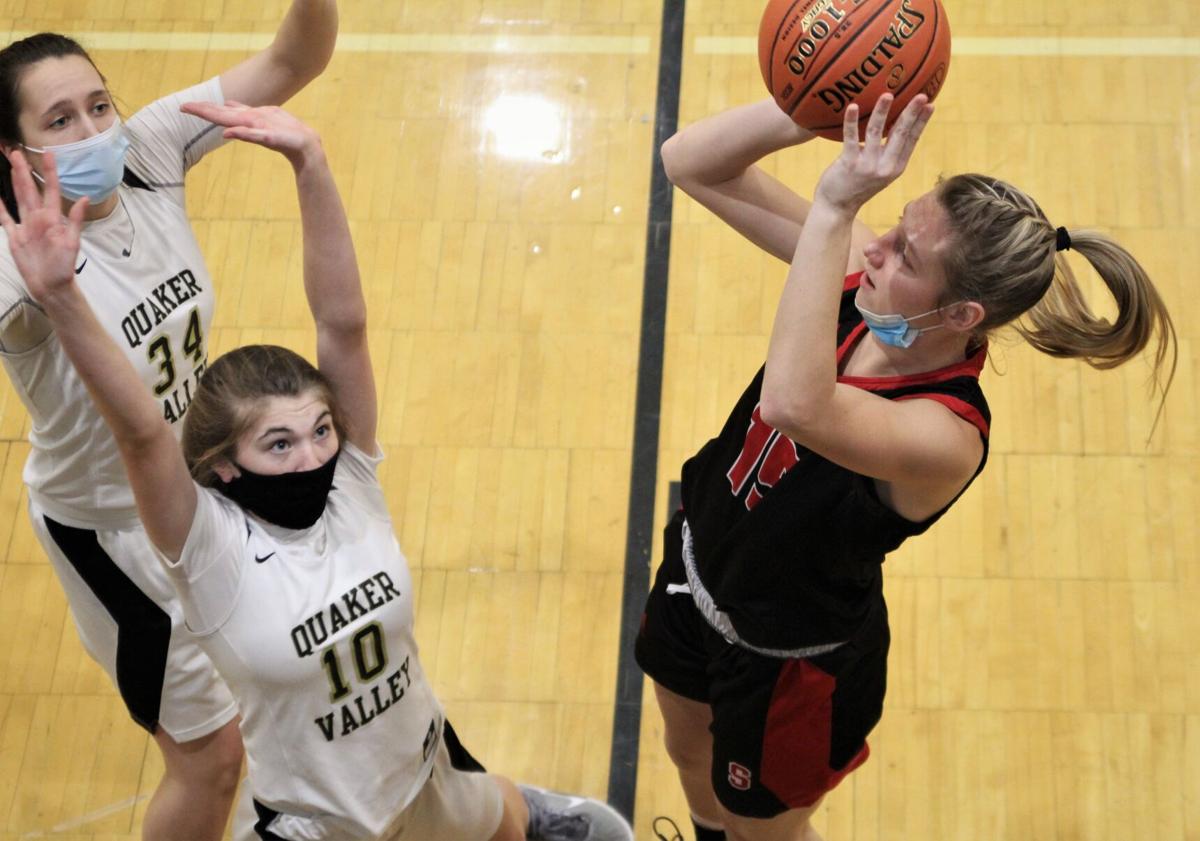 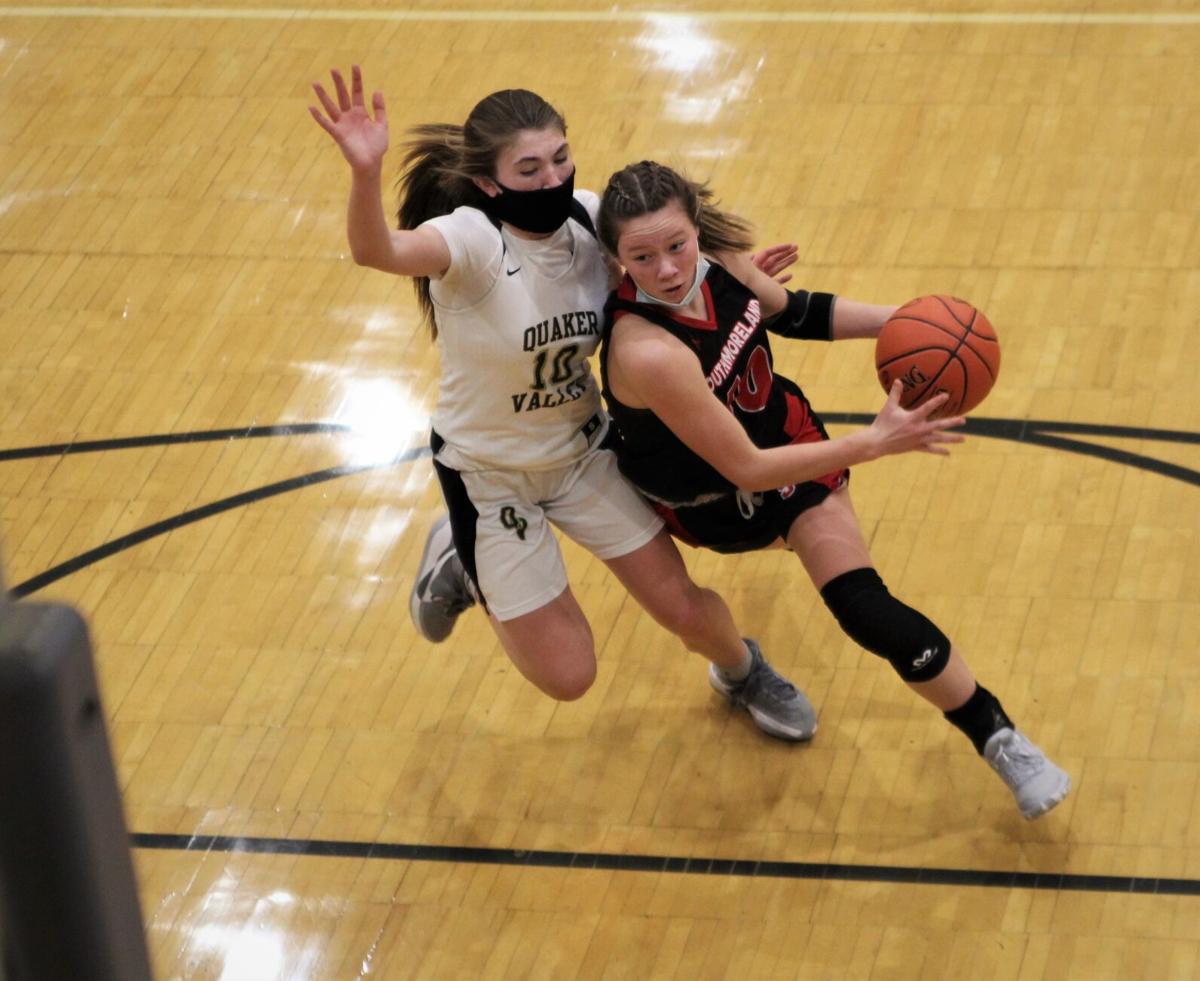 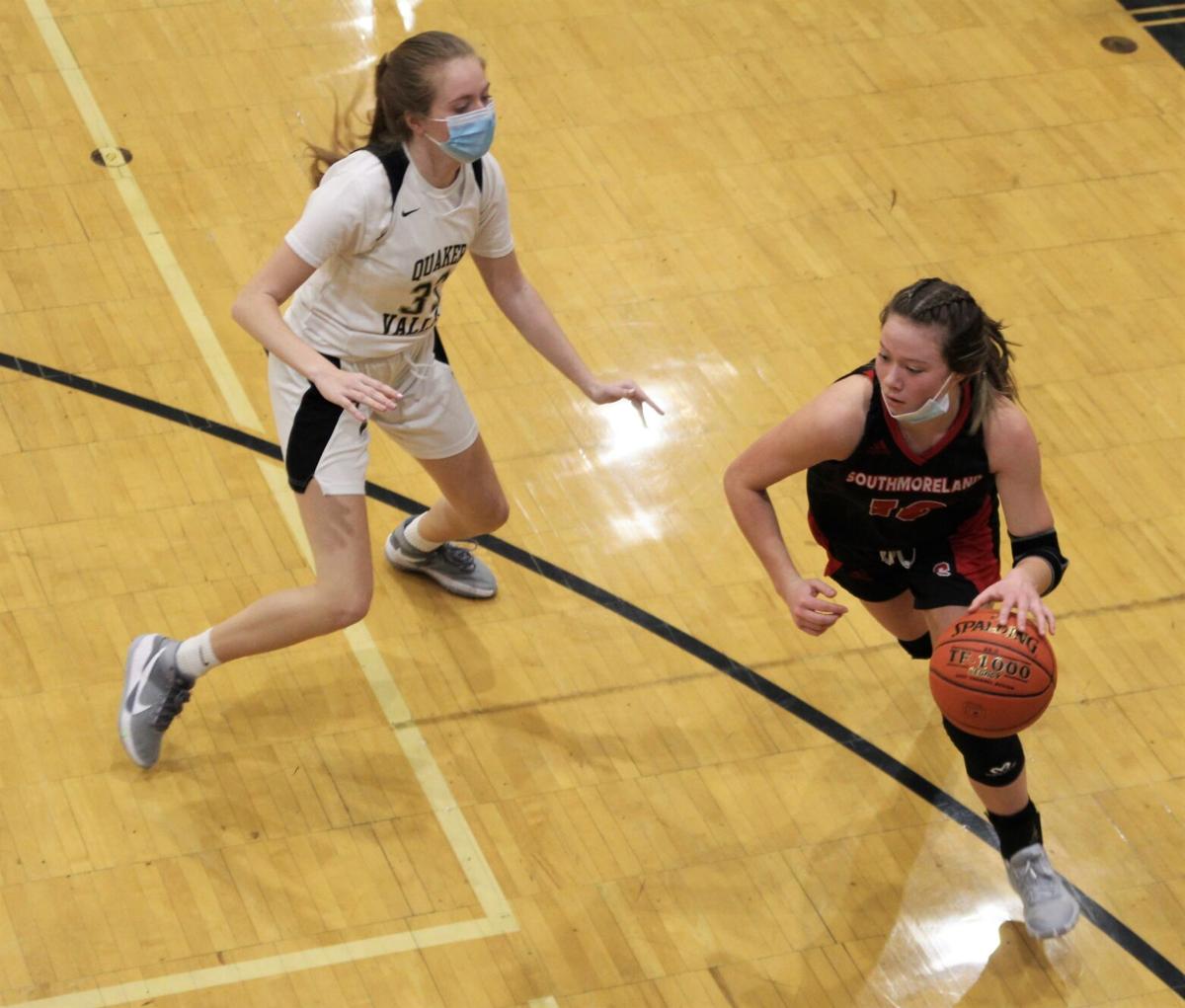 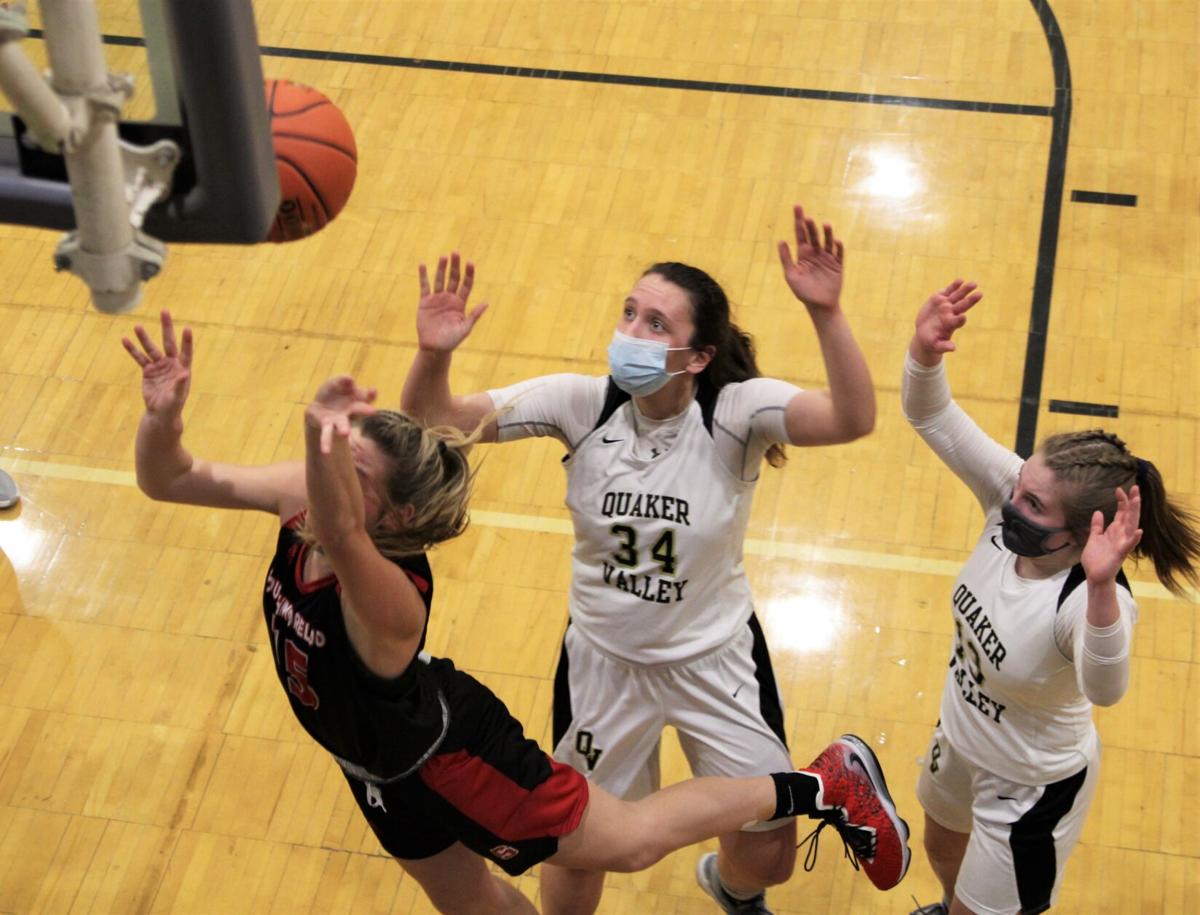 Southmoreland’s Grace Spadaro puts up a shot for two of her team-high 21 points over Quaker Valley’s Lily Johns (13) and Claire Kuzma (34) in the second quarter of Tuesday’s WPIAL Class AAAA semifinal playoff game at Quaker Valley.

Southmoreland’s Grace Spadaro puts up a shot for two of her team-high 21 points over Quaker Valley’s Lily Johns (13) and Claire Kuzma (34) in the second quarter of Tuesday’s WPIAL Class AAAA semifinal playoff game at Quaker Valley.

LEETSDALE — The Quaker Valley girls threatened to run away from visiting Southmoreland in the first quarter Tuesday night, but the defending champion Lady Scots fought back before eventually falling to the Lady Quakers, 60-50, in the WPIAL Class AAAA semifinals.

Southmoreland closes the season with an overall record of 16-5.

“I give our girls a lot of credit. They did fight,” praised Southmoreland coach Amber Weimer Cernuto. “We knew they were good. They have four seniors and we have all underclassmen.

“The girls really fought to the end.”

However, that was the last points of the quarter for the home team with the Lady Scots closing on a 9-0 run.

Maddie Moore, who scored nine points, started the run with a field goal. Gracie Spadaro added two more points, and Olivia Cernuto was fouled on a drive, making the layup but missing the free throw.

Cernuto again was fouled with 7.7 seconds left in the quarter as she sliced down the lane, making one of the two foul shots. However, Spadaro pulled down the errant free throw and made the putback with two seconds remaining to make the score 46-37 entering the fourth quarter.

Quaker Valley pushed the lead to 50-37 early in the quarter.

Southmoreland showed the grit of a defending champion as the Lady Scots rallied one last time.

Corinne Washington hit a pair of field goals, matched by two free throws from Spadaro and Moore’s field goal to keep the deficit at seven points, 54-47, with 2:04 remaining.

Delaynie Morvosh, who finished with eight points, made a 3-pointer with 50 seconds left to draw Southmoreland to 56-50, but Garbee hit four free throws in the final 45 seconds to secure the win.

“I saw some fire in their eyes,” Weimer Cernuto said of the late rally. “That’s what I hoped they would do. They got together as a team and were helping each other.”

Quaker Valley threatened to make the game a laugher in the early minutes of the game.

Lily Johns hit a 3-pointer to give Quaker Valley a 9-2 lead in the first quarter, leading Weimer Cernuto to call at timeout at 5:30.

The timeout settled the Lady Scotties down with the visitors outscoring Quaker Valley, 11-9, to trail 18-13 after the first quarter.

Spadaro was the go-to player on the offensive end in the first eight minutes with the forward finding open space in the Quaker Valley zone defense along the baseline to scored 11 of the Lady Scots’ first 13 points. Spadaro finished with a team-high 21 points.

“Gracie did her job,” said Weimer Cernuto. “It seemed we were getting good shots. They didn’t fall like they normally fall.”

Garbee scored her 1,000th career point early in the second quarter as the home team widened its lead.

Southmoreland held the ball for the last shot of the first half, but Spadaro had her shot blocked and Quaker Valley made the most of the defensive play with Nora Johns scoring a layup before the buzzer for a 33-20 halftime lead.

Weimer Cernuto was proud of how her defending champions played after entering the season as the team to beat and navigating through the pandemic.

“We were on top of the preseason polls. That gave the girls something to chase,” said Weimer Cernuto. “It was a crazy year. We were shut down early, but we were fortunate we got all of our games in. Every day, you wonder when is the hammer going to drop?