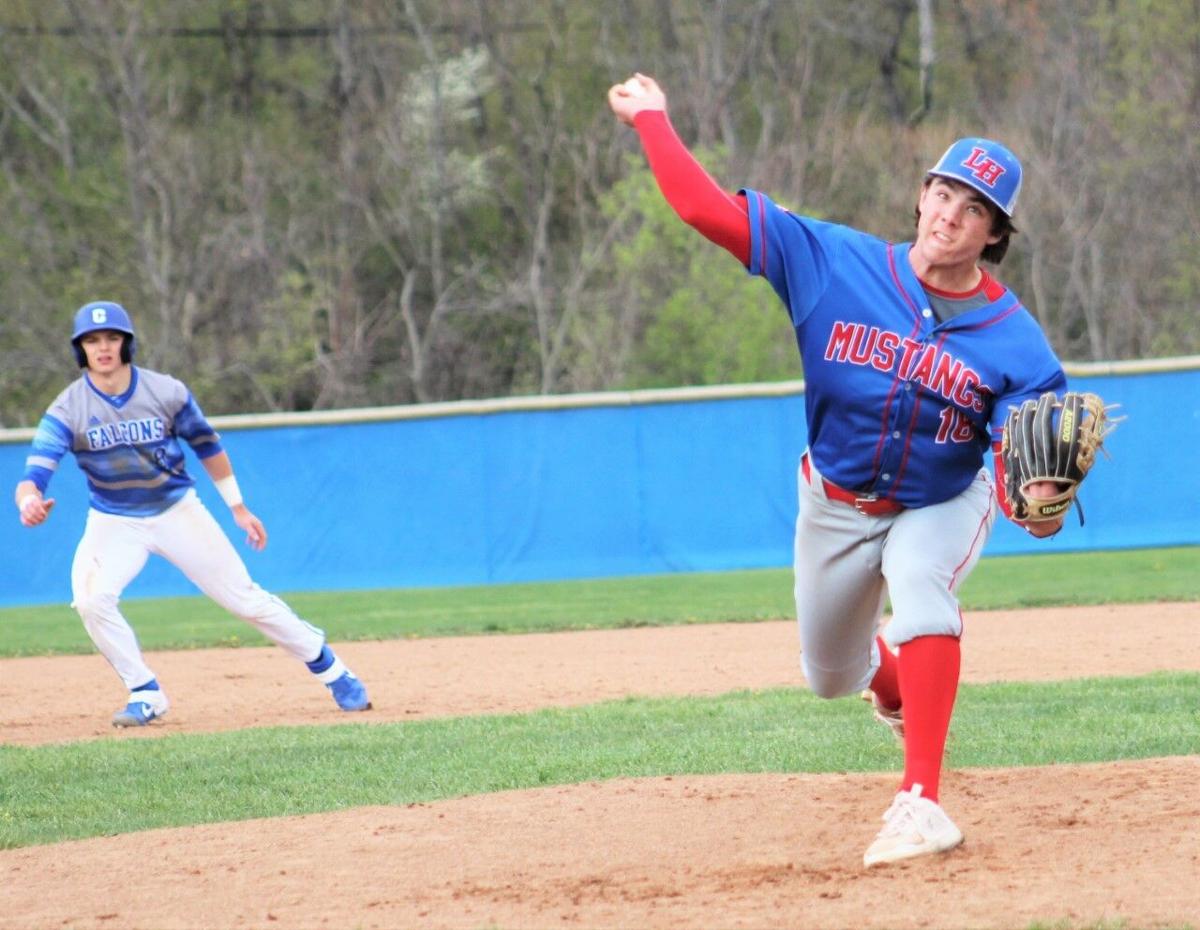 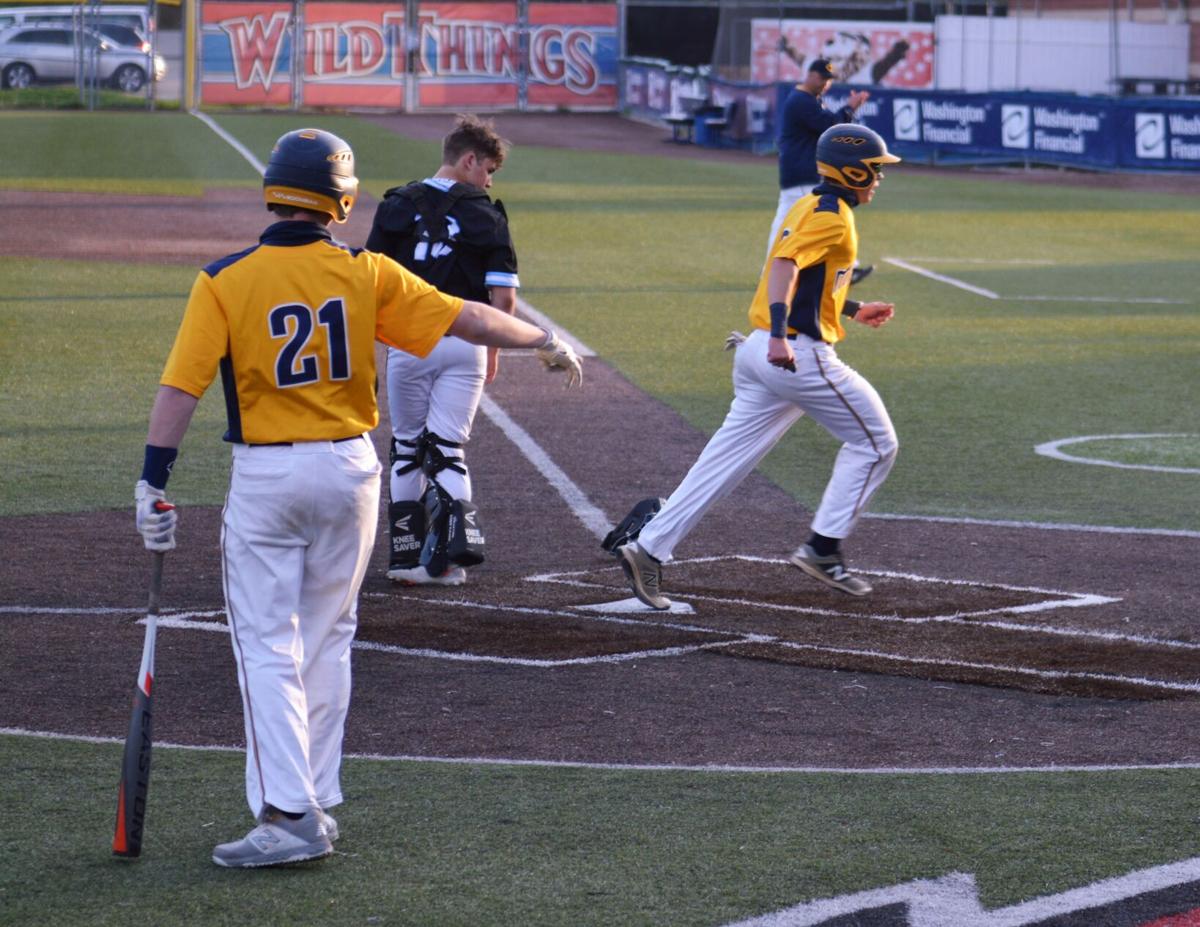 Carmichaels’ Jacob Fordyce (21) points the way as the Mikes’ Liam Lohr crosses home plate during the fifth inning of a game against Washington at Wild Things Park on May 2. The Mikes were the highest seeded local team at No. 3 in Class AA, according to the WPIAL baseball pairings released on May 14. (Photo by Rob Burchianti)

Carmichaels’ Jacob Fordyce (21) points the way as the Mikes’ Liam Lohr crosses home plate during the fifth inning of a game against Washington at Wild Things Park on May 2. The Mikes were the highest seeded local team at No. 3 in Class AA, according to the WPIAL baseball pairings released on May 14. (Photo by Rob Burchianti)

Laurel Highlands and Carmichaels are the highest seeded local teams and both will open the playoffs on Wednesday, according to the WPIAL baseball pairings released Friday afternoon.

The Mustangs were made the No. 5 seed in Class AAAA and are slated to play No. 12 Beaver in a 2 p.m. game at Washington & Jefferson’s Ross Memorial Park.

“I’m really satisfied with it,” LH coach Scott DeBerry said of the pairings. “We’ve lost a couple close games here and there that could’ve really made a difference. But overall I’m good with the bracket.”

The Mikes were slotted in at No. 3 in Class AA and are scheduled to play No. 14 Apollo Ridge in a 4:30 p.m. contest at Mount Pleasant.

"I'm excited about that," Carmichaels coach Dickie Krause said. "Every coach does some sort of projection and I thought we would be at least a four with a chance at being a three. It seems to be appropriate. Looking at the entire bracket it seems to be pretty well done."

Eleven other local teams found out their path in the postseason, including Connellsville in Class AAAAA, Belle Vernon and Elizabeth Forward in Class AAAA, Yough, Brownsville and Waynesburg Central in Class AAA, California, Beth-Center and Bentworth in Class AA and Jefferson-Morgan and West Greene in Class A.

Sites and times were only announced for first round games. All others will be determined when match-ups are set.

Laurel Highlands reached the WPIAL final in 2019 and the fact its loaded 2020 team never got a chance to get on the field has been well documented. DeBerry is proud of the way his team has roared back from that misfortune.

“It’s very satisfying what we’ve done,” DeBerry said. “I’m not going to say I didn’t expect it. I honestly did because they came together and played well in the fall and did well against some pretty good teams.

“I thought that we could carry it over. We’ve added Joe Chambers to the mix on the mound and he’s been spectacular so that has helped us a lot.”

If Laurel Highlands reaches the quarterfinals it will play the winner between No. 4 North Catholic and No. 13 Elizabeth Forward on May 24. The top three seeds in Class AAAA, in order, are Montour, West Mifflin (which LH split two games with, handing the Titans their worst loss of the season, 11-1, on April 3) and Blackhawk.

“Whenever they play the way they can play I believe they can compete with anybody,” DeBerry said of his squad. “It’s just every once in awhile one of those games creeps in on us where the defense falls apart, we can’t throw strikes, which is why we’ve lost a couple games I think we should’ve won. But I know this is a confident group.”

If Carmichaels advances to the quarterfinals, set for May 21, they would face a potential rematch with No. 6 Chartiers-Houston, which handed the Mikes’ their lone loss of the season, 7-6 on April 16. The Bucs play No. 11 Riverside in the first round.

When asked about his thoughts on possibly meeting C-H again, Krause said "There is zero percent chance that anybody affiliated with Carmichaels is looking ahead. We're all about one game at a time. When you start trying to figure out who you might play next it just distracts you and it bites you and you end up losing.

"Our complete focus is on Apollo Ridge."

The top four seeds in Class AA are, in order, Seton LaSalle, Shenango, the Mikes and Serra Catholic.

California, one of the hottest teams in the WPIAL with 11 wins in a row and a second-place finish behind Carmichaels in Section 1-AA, was only seeded ninth and will play No. 8 Shady Side Academy in a 4:30 p.m. game at Hempfield on Wednesday.

“I’m pretty heated, I’ll be honest with you,” Pasquale said. “I went through some possible scenarios on my own. Even some of those other places had us at least as a six or seven.

“We got beat up by Carmichaels early and were 1-3. Now we’re 12-3 and along the way we beat two triple-A playoff teams and Belle Vernon, a quad-A playoff team. So if strength of schedule had anything to do with it, you’ve got to think we’d be higher than a nine.”

If California can get by Shady Side it will play the winner of Wednesday’s 4:3- p.m. game between Seton LaSalle and Bentworth.

Also in Class AA, No. 12 Beth-Center meets No. 5 Laurel in a 2 p.m. game at Burkett Complex on Wednesday.

Connellsville was seeded 14th and plays No. 6 Penn-Trafford in a 2 p.m. game at Norwin on Wednesday. The Falcons narrowly lost to the Warriors during the regular season, falling 4-3 on the road on April 3.

Brownsville was seeded 14th and will play No. 3 South Park in a 2 p.m. game at West Mifflin on Thursday. The two were scheduled to meet during the regular season but the game was postponed.

“If I had to make the lineup right now I’m probably going to throw Zach Kutek, a senior left-hander against them.”

Roebuck was fine with Brownsville’s seed.

“I think that’s fair,” he said. “We’ve had our struggles. But our kids are excited for the playoffs. That’s something we expect to do every year. They get to play a good opponent on a nice turf field so they’re looking forward to it.”

The No. 6 Rockets will travel to Mount Pleasant to play No. 11 Leechburg in a 2 p.m. game on Wednesday. The winner of that game will play No. 3 Rochester on May 24.

J-M coach John Curtis, who registered coaching win No. 375 on Thursday to clinch sole possession of second place behind second-seeded Greensburg Central Catholic in Section 2-A, was hoping for a slightly higher seed.

“I think we had the fourth-best record,” Curtis said, “so I thought we’d have a shot to be a little bit higher.

“I haven’t seen Leechburg play. I got the names of the kids in their lineup, their batting averages and who their No. 1 pitcher is. It seems like they hit the ball pretty well.”

West Greene, which split two games with Jefferson-Morgan, fell in a tight battle with Rochester during the regular season, falling 5-3. Curtis declined to ponder a possible matchup with the Rams, however.

The Pioneers were seeded eighth and will clash with No. 9 Sewickley Academy in a 2 p.m. game at Peterswood Park on Wednesday with the winner meeting top-seeded Eden Christian on May 24.