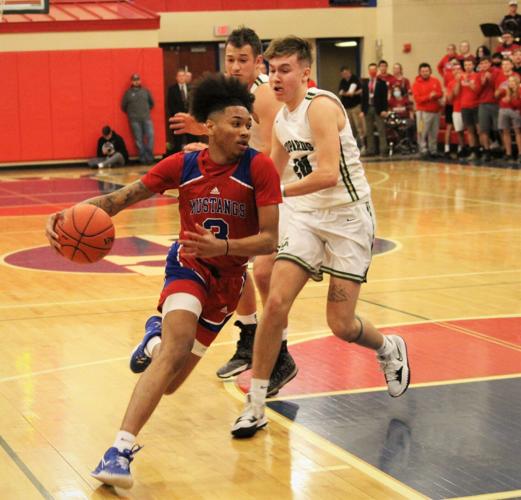 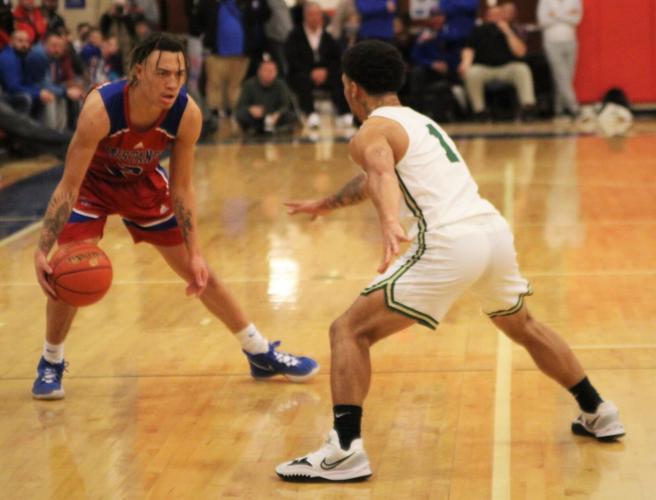 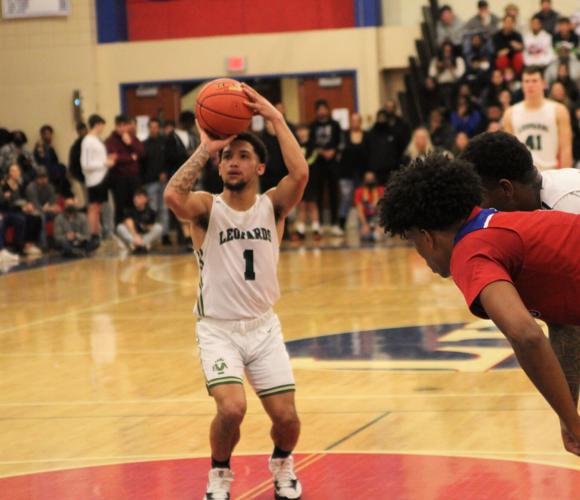 Belle Vernon’s Devin Whitlock shoots from the foul line during the second quarter of Wednesday’s non-section game at Laurel Highlands. 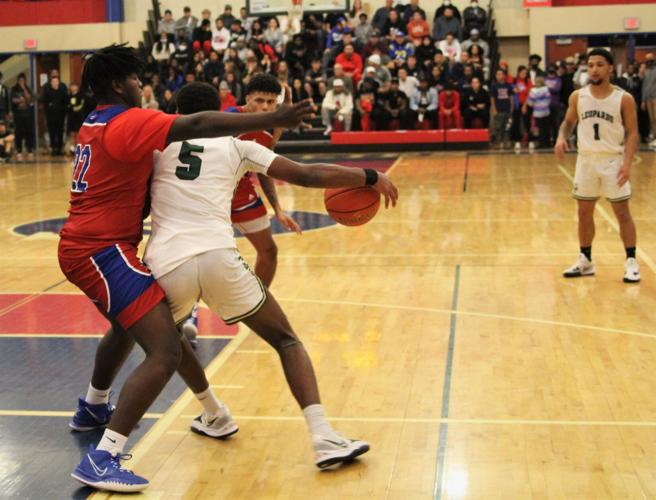 The Mustangs’ Ayanze Sumpter (22) bodies up on Belle Vernon’s Quinton Martin (5) in the second quarter of Wednesday’s non-section at Laurel Highlands. 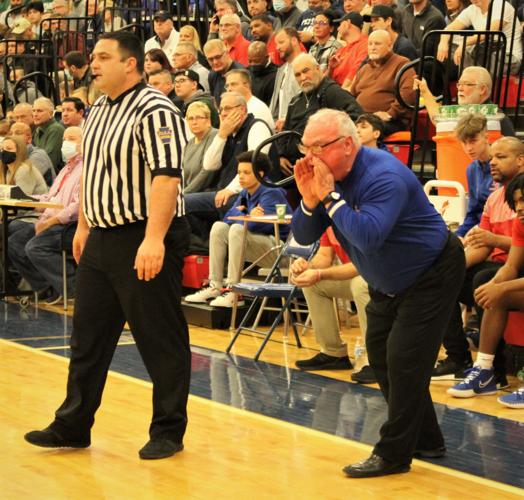 Laurel Highlands Rick Hauger yells instructions to his squad during the second quarter of Wednesday's non-section game against Belle Vernon at Laurel Highlands. 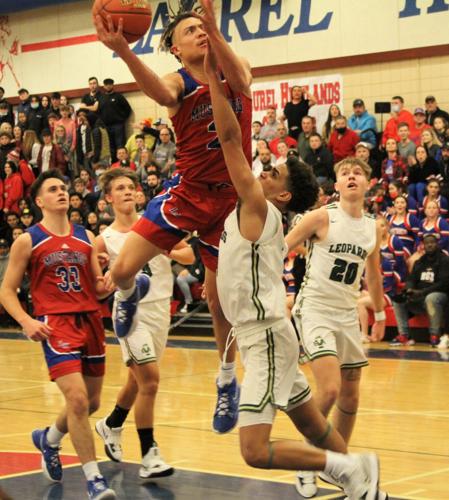 The Mustangs’ Rodney Gallagher (2) manages to put up a shot as he is fouled by Belle Vernon’s Alonzo Wade (4) in the first quarter of Wednesday’s non-section game at Laurel Highlands. 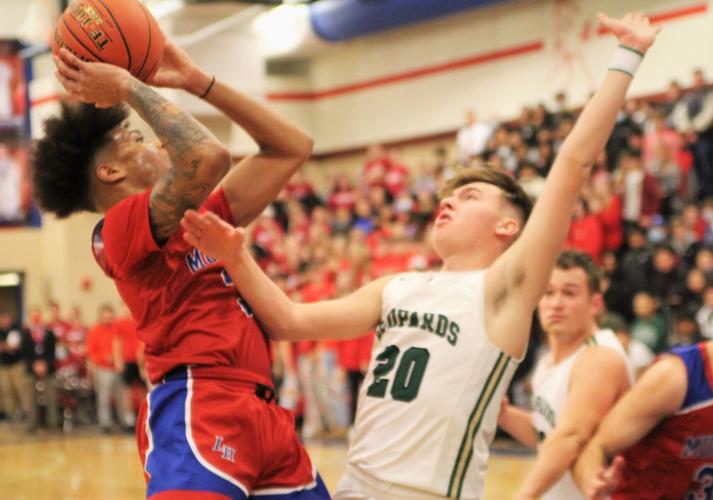 Belle Vernon’s Devin Whitlock shoots from the foul line during the second quarter of Wednesday’s non-section game at Laurel Highlands.

The Mustangs’ Ayanze Sumpter (22) bodies up on Belle Vernon’s Quinton Martin (5) in the second quarter of Wednesday’s non-section at Laurel Highlands.

Laurel Highlands Rick Hauger yells instructions to his squad during the second quarter of Wednesday's non-section game against Belle Vernon at Laurel Highlands.

The Mustangs’ Rodney Gallagher (2) manages to put up a shot as he is fouled by Belle Vernon’s Alonzo Wade (4) in the first quarter of Wednesday’s non-section game at Laurel Highlands.

However, even the hype didn’t live up to the contest the two teams put on with the Mustangs protecting their sold-out home court, 76-67.

“I think it lived up to the hype,” said LH coach Rick Hauger. “You go into the last quarter tied and no one could ask for more.

“We both got to see what we were doing well and things we need to work on.”

“It was a good game, there is no doubt about that,” said Belle Vernon coach Joe Salvino. “We got off to a slow start, but battled back and I could not be prouder of the team.

“Laurel Highlands is a good team, and we haven’t faced a team like them.”

The energy in the gym was electric and the players fed off throughout the entire game.

“We went out and played hard as a family in front of a big crowd,” said Laurel Highlands’ Brandon Davis, who finished with a game-high 29 points. “I loved the energy, they were talking, we were talking, and we were able to get the win.”

Davis led the Mustangs (12-0) in the first quarter by setting the tone with 11 points and the home team led 20-9 heading into the second quarter.

“He is an energetic guy, and his motor just keeps going,” Hauger said of Davis. “He energized us tonight.”

Belle Vernon (12-1) switched from its man defense to a zone in the second quarter in an attempt to neutralize the Mustangs’ athletic advantage.

The defensive switch cut down slashing opportunities to the basket, forcing the Mustangs into a jump-shooting team. The change allowed the Leopards to cut into the lead.

“They have some good players who can shoot, and I was worried about that,” said Salvino. “It worked out for us and got us back into the game.”

Belle Vernon slowly chipped away at the deficit in the third quarter and a Devin Whitlock 3-pointer gave the visitors its first lead at 49-47 with 2:04 to go in the quarter.

“We spent a lot of energy getting back into the game,” said Salvino. “Our guys were excited to play them and knew we could hang, but getting behind early like we did, it just didn’t work out.”

Rodney Gallagher scored with 12 seconds remaining in the quarter to tie the game at 49-49 heading into the fourth quarter.

The Mustangs went on a quick 5-0 run to take a 54-49 lead a minute in to the fourth quarter, but Whitlock and Daniel Gordon hit consecutive 3-pointers to give the Leopards a 55-54 lead with 6:58 to go.

Laurel Highlands went on an 11-0 run to take a 65-55 lead, and the Leopards would get no closer than six points the rest of the way.

“This was a great win against a great team,” said Gallagher. “They made us better today and their zone was super hard.

“They will have a chance to win a (WPIAL) title.”

Martin added 12 rebounds and five blocks, while DeShields had eight rebounds for the Mustangs.

Hauger commented on the environment in the gym and how Penn State football coach James Franklin, along with Pitt’s Pat Narduzzi and coaches from Notre Dame, Miami (Ohio), and others were in attendance.

“Everyone knows who they were here to see, but they saw a good game,” Hauger said with a smile. “And, coaches have big networks, so maybe they saw something they liked and will pass it along.”

Both teams return to play Friday with the Leopards hosting Mount Pleasant in a Section 3-AAAA game, while Laurel Highlands hosts Norwin in a non-section game.

The Mustangs lead the all-time series, 43-26. The last time Belle Vernon opened the season with a 12-0 record was in the 1973-74 season. The Leopards’ streak that season was halted in the 13th game with a loss to Ringgold.