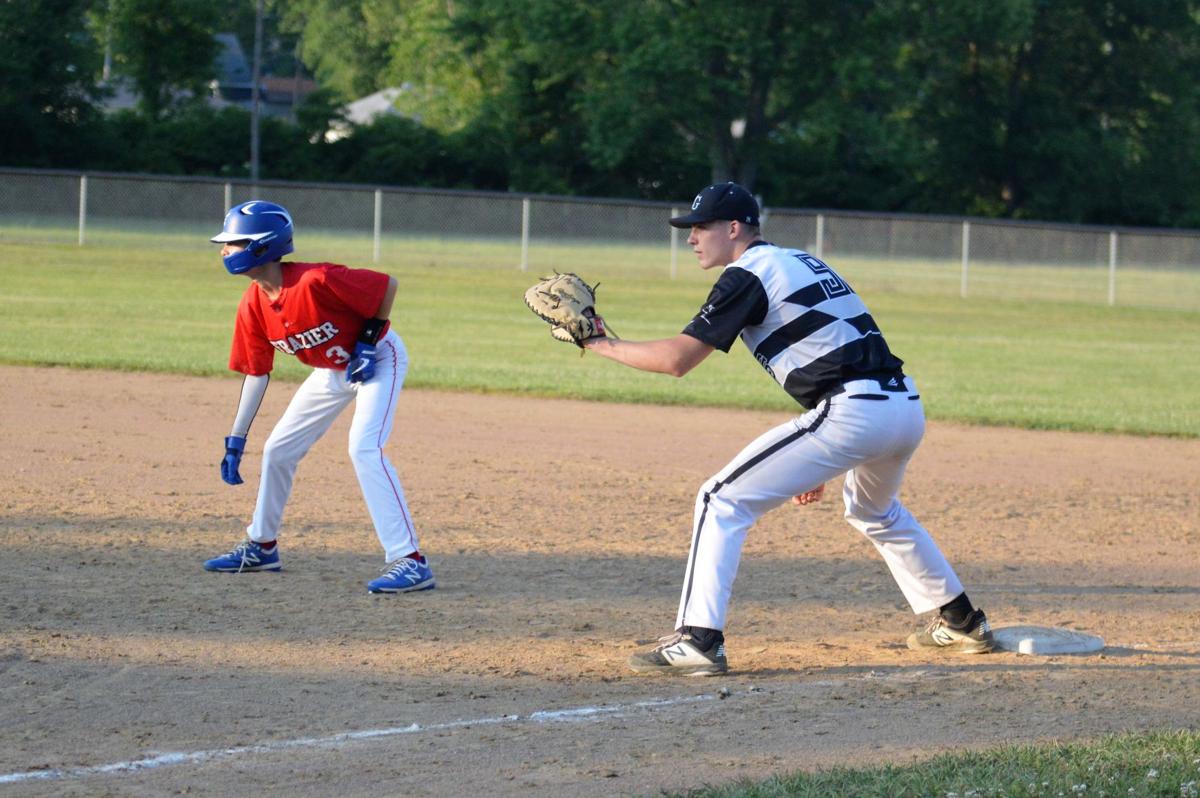 Smithfield-Fairchance first baseman Nick Pegg holds on Frazier runner A.J. Dominick during a Western Pennsylvania Summer Baseball League game at Perryopolis Ball Field on June 30. Both teams are scheduled to begin the playoffs today although circumstances may result in Smithfield-Fairchance, which went 7-3 during the regular season, not having enough players to participate. 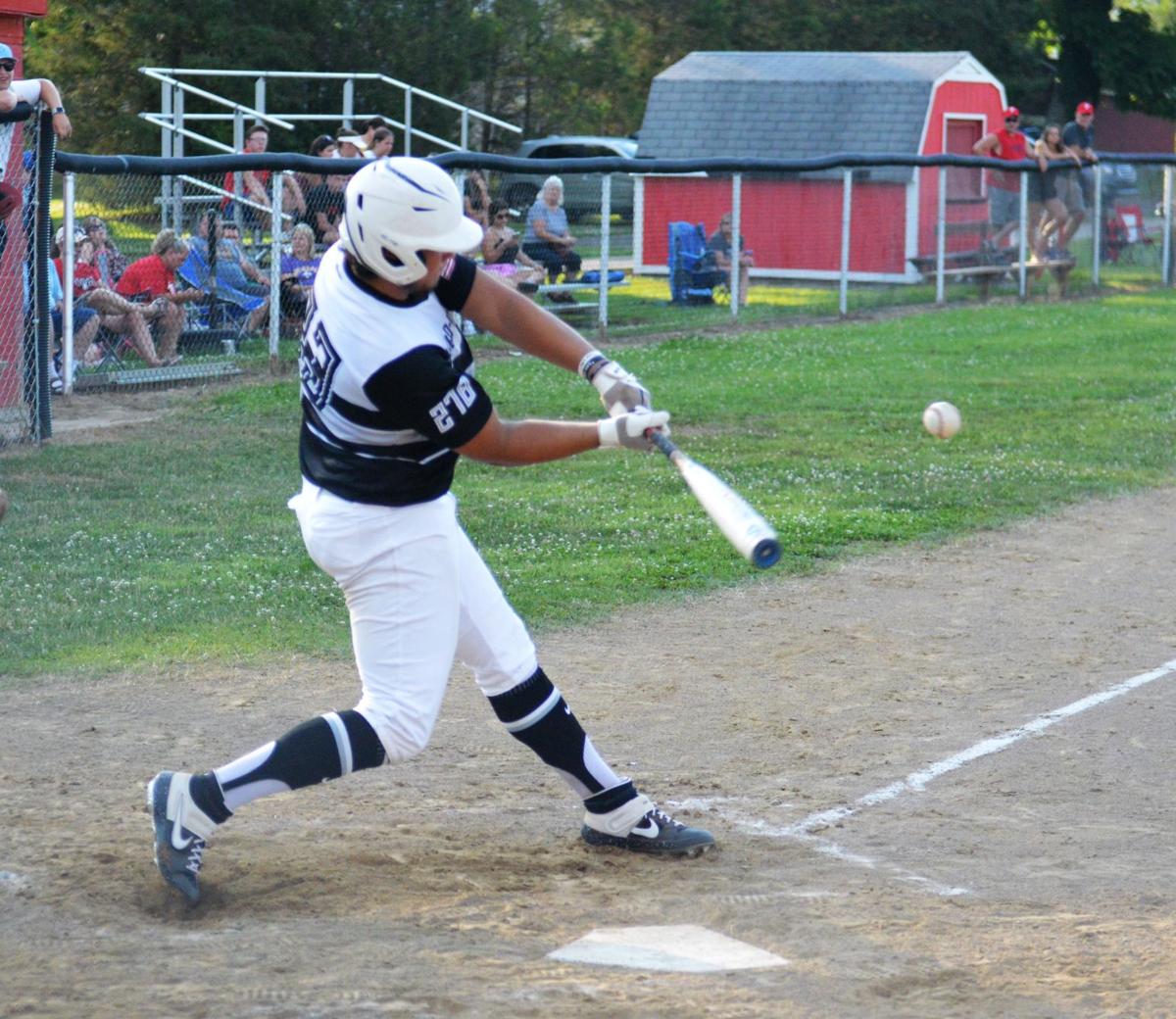 Smithfield-Fairchance’s Dylan Shea connects on a swing against Frazier during a Western Pennsylvania Summer Baseball League game at Perryopolis Ball Field on June 30. Both teams are scheduled to begin the playoffs today although circumstances may result in Smithfield-Fairchance, which went 7-3 during the regular season, not having enough players to participate.

Smithfield-Fairchance first baseman Nick Pegg holds on Frazier runner A.J. Dominick during a Western Pennsylvania Summer Baseball League game at Perryopolis Ball Field on June 30. Both teams are scheduled to begin the playoffs today although circumstances may result in Smithfield-Fairchance, which went 7-3 during the regular season, not having enough players to participate.

Smithfield-Fairchance’s Dylan Shea connects on a swing against Frazier during a Western Pennsylvania Summer Baseball League game at Perryopolis Ball Field on June 30. Both teams are scheduled to begin the playoffs today although circumstances may result in Smithfield-Fairchance, which went 7-3 during the regular season, not having enough players to participate.

Laurel Highlands joined the WPSBL after the league began play and is in the playoff field, while Smithfield-Fairchance is in danger of having to forfeit it’s preliminary-round game.

Local teams also in the WPSBL postseason are Frazier, Waynesburg and Elizabeth Forward, who play today, and Mon City and Leopard Nation.

Laurel Highlands, which is basically made up of players on the Mustangs team that has romped through its HARC Teener League schedule, has a bye into the quarterfinals after the WPSBL held a random drawing to determine the 24-team playoff schedule. Manager Buddy Marra’s squad will play the winner of today’s 7 p.m. match-up between Monroeville and Kittanning-Worthington on Wednesday at 7 p.m. Both games are at Gateway High School.

LH players also have played on the Patriots travel league team which recently won a tournament in Bridgeport, West Virginia.

“It’s been good to get the seniors out and playing some games after losing their high school season when they had such high expectations,” Marra said. “These kids are playing a ton of baseball right now. They’ve definitely made up for some lost time.”

The LH seniors haven’t lost a game this summer in any league or tournament, but Marra is wary of the competition in the WPSBL.

“There aren’t going to be any easy games,” Marra said. “Not at all. There are some 6-A schools, a lot of talented teams. It’s not going to be a cakewalk, that’s for sure. It should be interesting.”

The Mustangs of the HARC League play California at Hutchinson Field in a 6 p.m. playoff game today.

Smithfield-Fairchance, which is managed by Albert Gallatin head coach Ron Popovich and consists of AG players, is scheduled to play EF in a 4:30 p.m. preliminary round game today at DiVirgilio Field. Popovich’s squad is short-handed, though, and may not be able to participate.

“We had a coach and a player test positive for COVID-19 and another who was tested and won’t know the result until later this week,” Popovich said. “So we now have some parents who are concerned about the virus and may not be comfortable letting their kids play, which I fully understand. Then I have another kid who’s out with an injury.

“I’m still not sure if we’ll have enough to field a team or not. We’ll have to wait and see.”

Popovich said his team has practiced social distancing and taken all the precautions required of them under the league rules.

“We’ve done everything we can to be safe,” he said.

Smithfield-Fairchance had a solid season, going 7-3.

“I think we’ve played well,” Popovich said. “We only have two seniors (from 2020) so a lot of underclassmen got plenty of playing time and when we had a nice, full roster, I made sure everybody got to play. So it was a successful season.

“I just don’t know, under the circumstances we face now, if we can finish it.”

Waynesburg, which opted to suspend play for a while after a student in the Central Greene School District had a positive coronavirus test, is back in action. Manager Jamie Moore, who is the head coach of the Raiders high school baseball team, will send his squad up against Baldwin at DiVirgilio Field at 7 p.m. today.

Frazier manager Rob Dorcon, whose team went 4-4 in the regular season, is familiar with his opponent.

“They’re a good team,” said Dorcon, who is an assistant coach with the Commodores high school baseball team. “They have a couple decent pitchers and they hit the ball pretty good. We play them a lot during travel season and other leagues.”

Dorcon is just happy his players got a chance to participate in some games.

“Since their high school season got cancelled it was nice these guys put this league together for them,” Dorcon said.

If Frazier wins it would move on to play at Mt. Lebanon in the quarterfinals on Tuesday at 6 p.m.

The Waynesburg-Baldwin winner plays Ingomar, a team made up of North Allegheny players, at a date, site and time to be determined.

Mon City, which is made up of Ringgold players and is managed by Rams head coach Don Roberts, will play the winner of today’s 5:30 p.m. game at Haymaker Park in Murrysville between Franklin Regional and Jeannette, on Wednesday at 4:30 p.m. at either Gateway High School or DiVirgilio Field.

Leopard Nation, which is made up of Belle Vernon players and is managed by Leopards head coach Tony Watson, will host the winner of today’s 6 p.m. Seneca Valley at Kiski Area game, in the quarterfinals Wednesday at 7 p.m.

The league championship game will be held at Wild Things Park on Aug. 3.