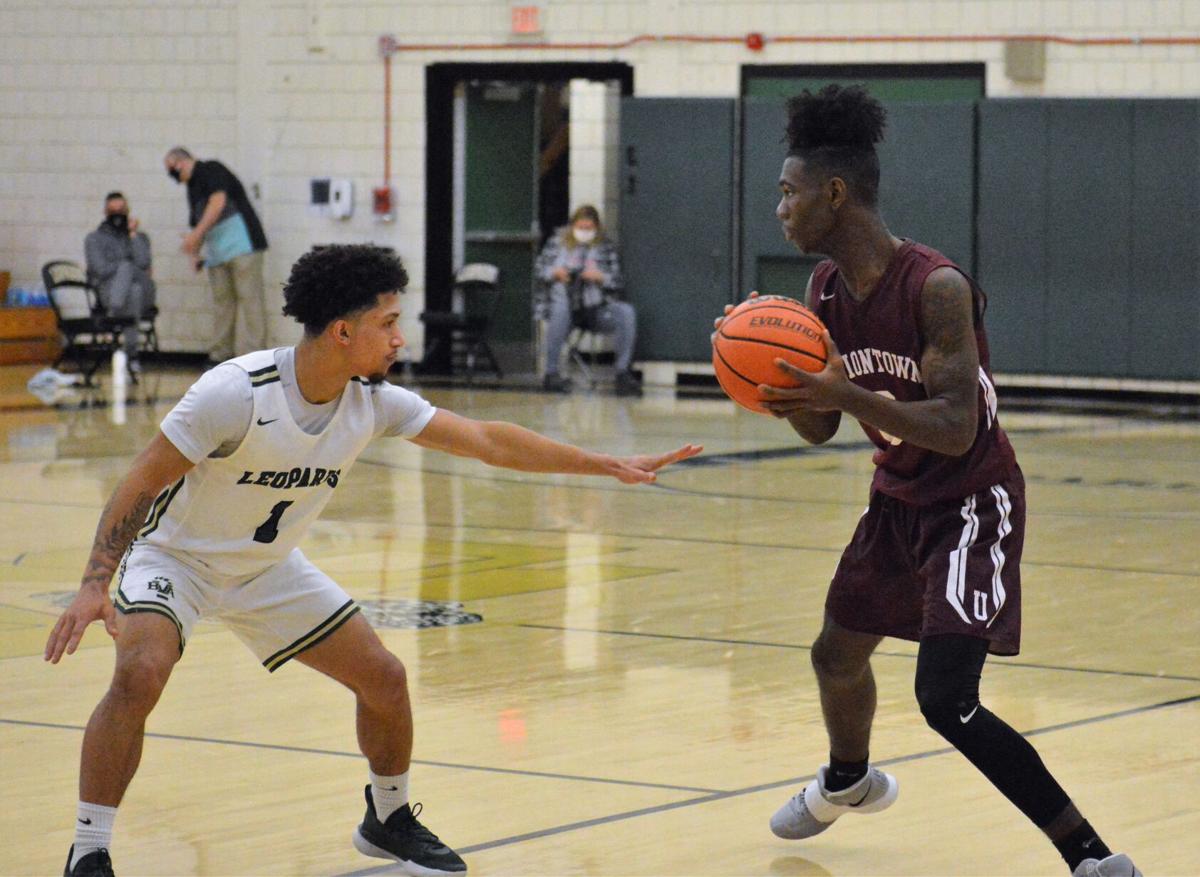 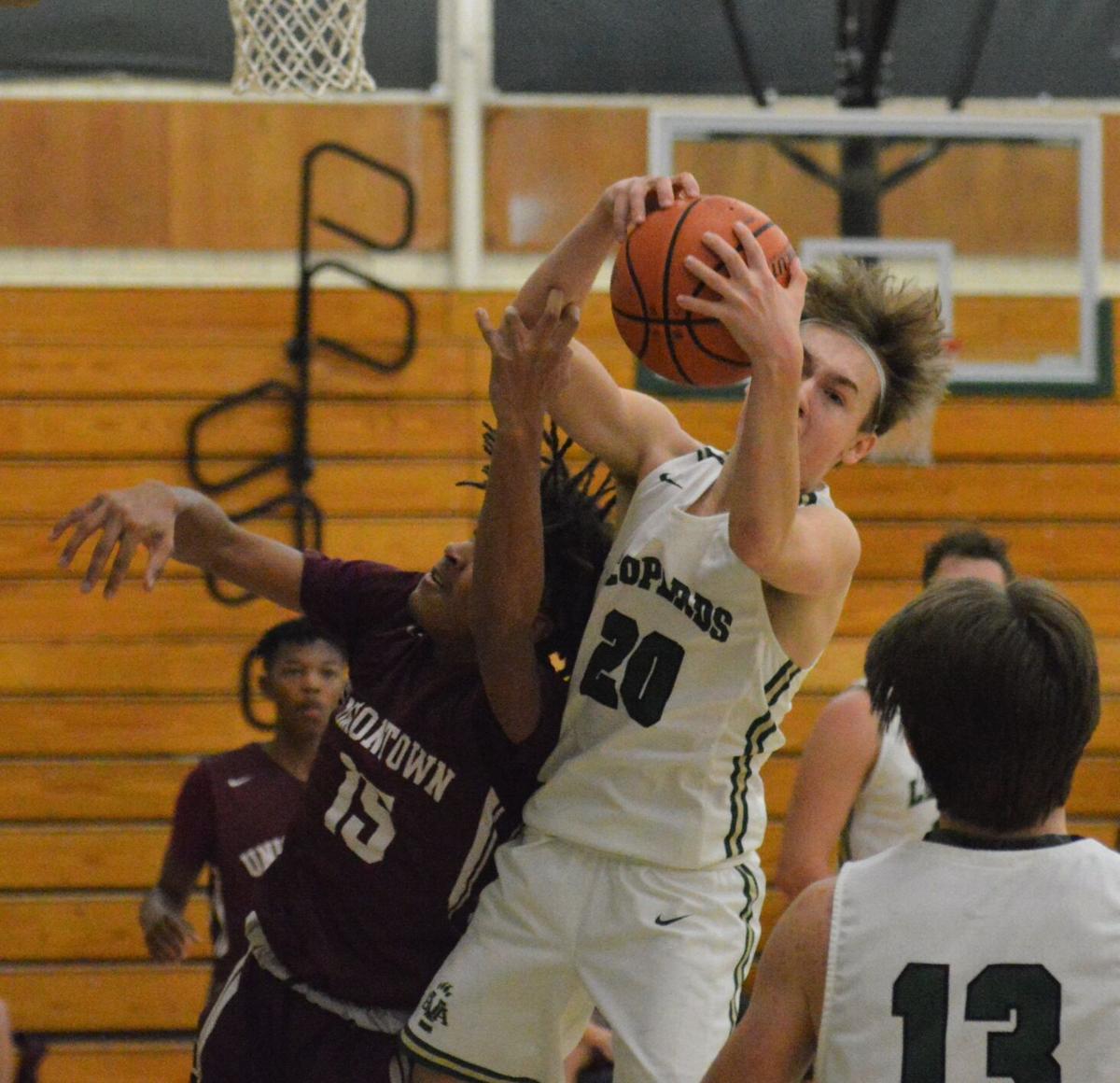 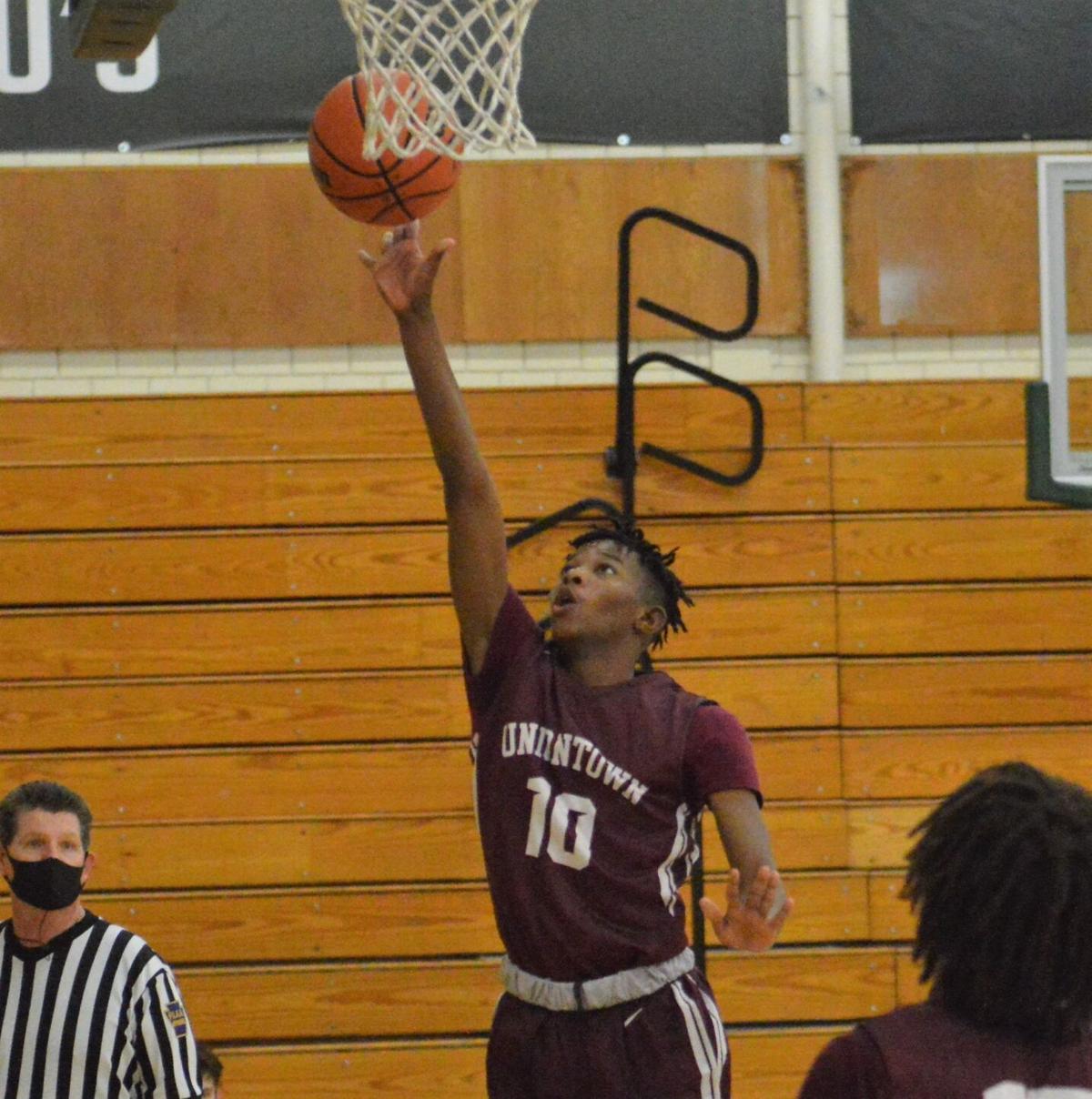 Uniontown’s Brian Sykes puts in two of his 10 points during Friday night’s game at Belle Vernon. 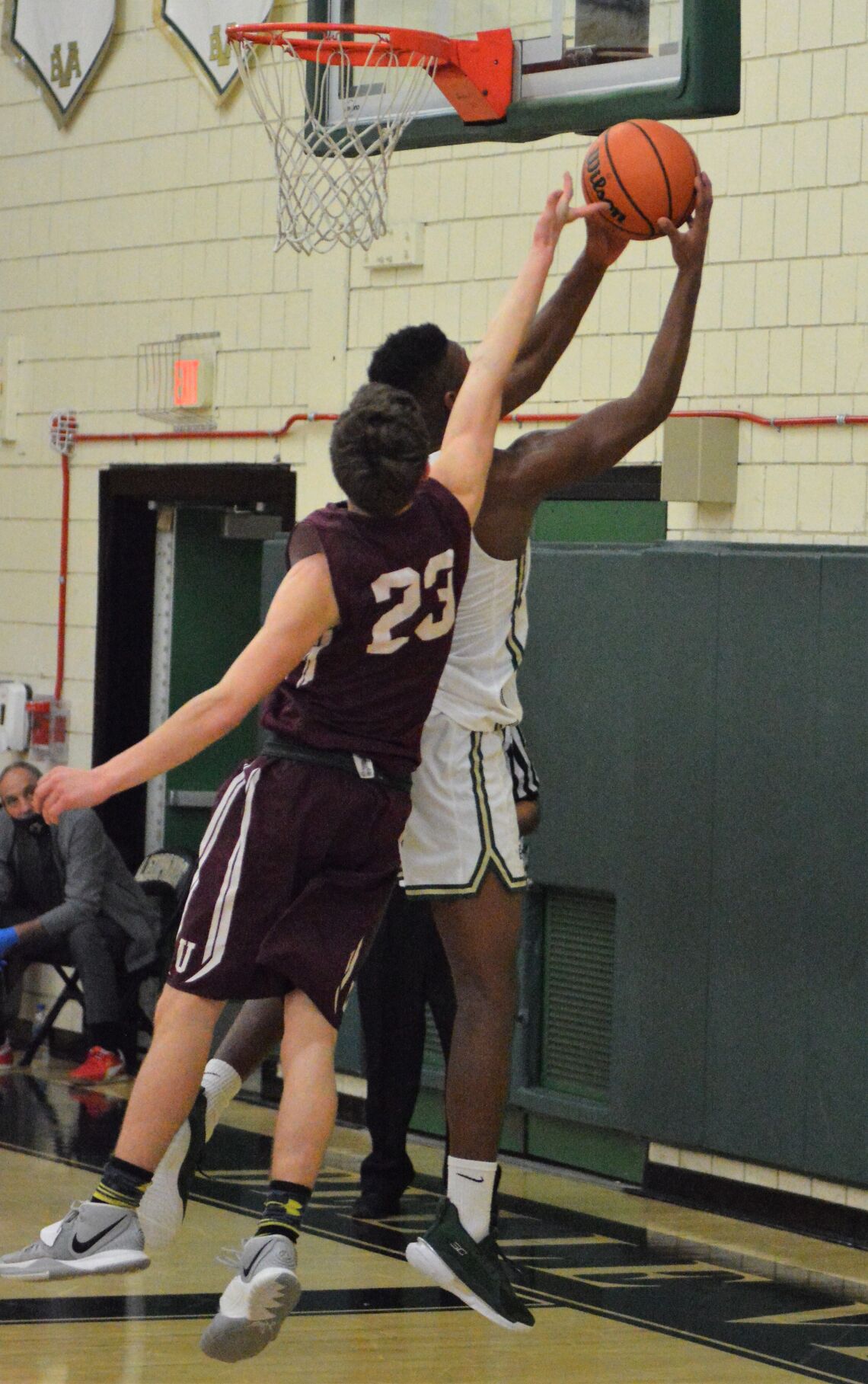 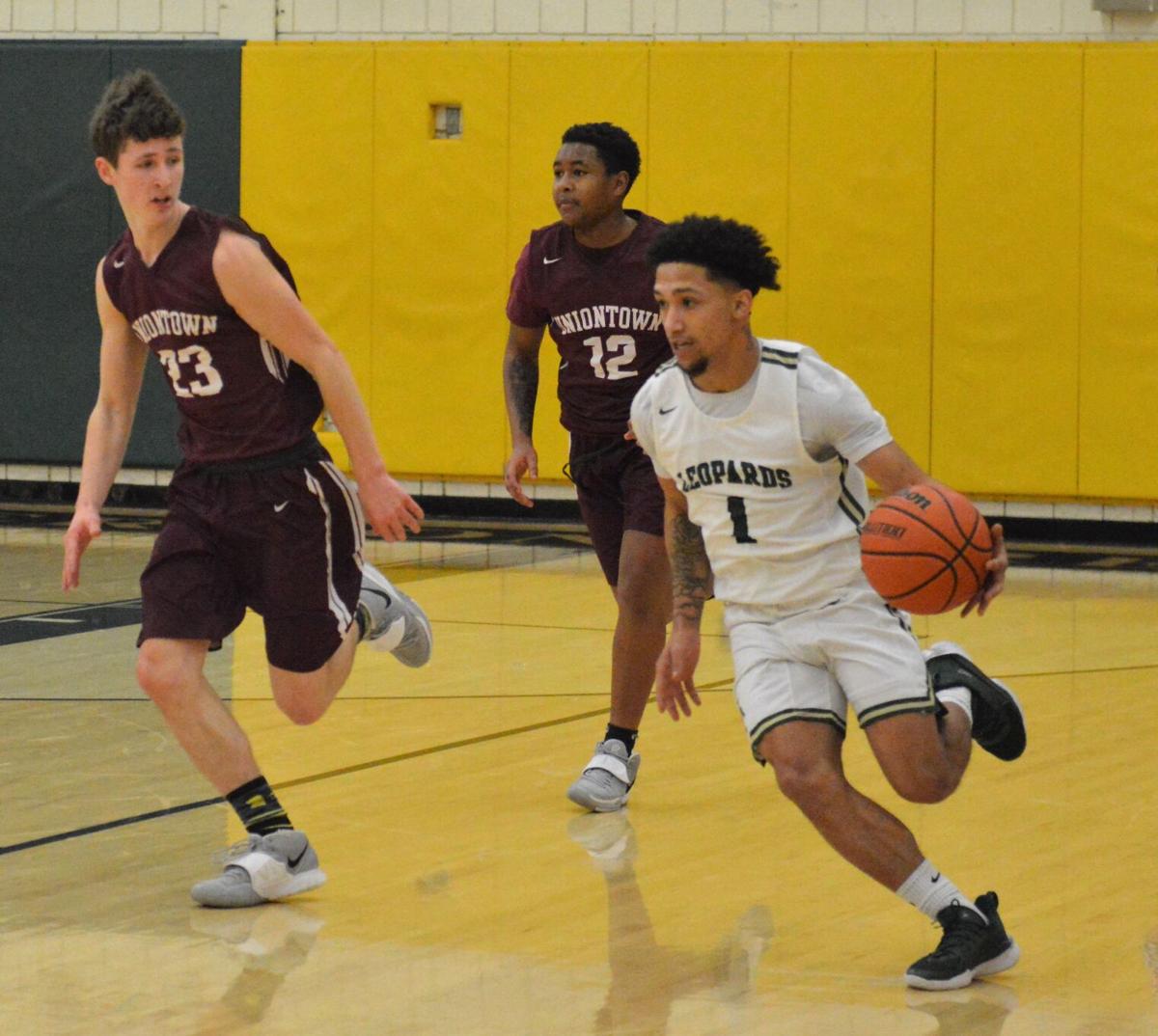 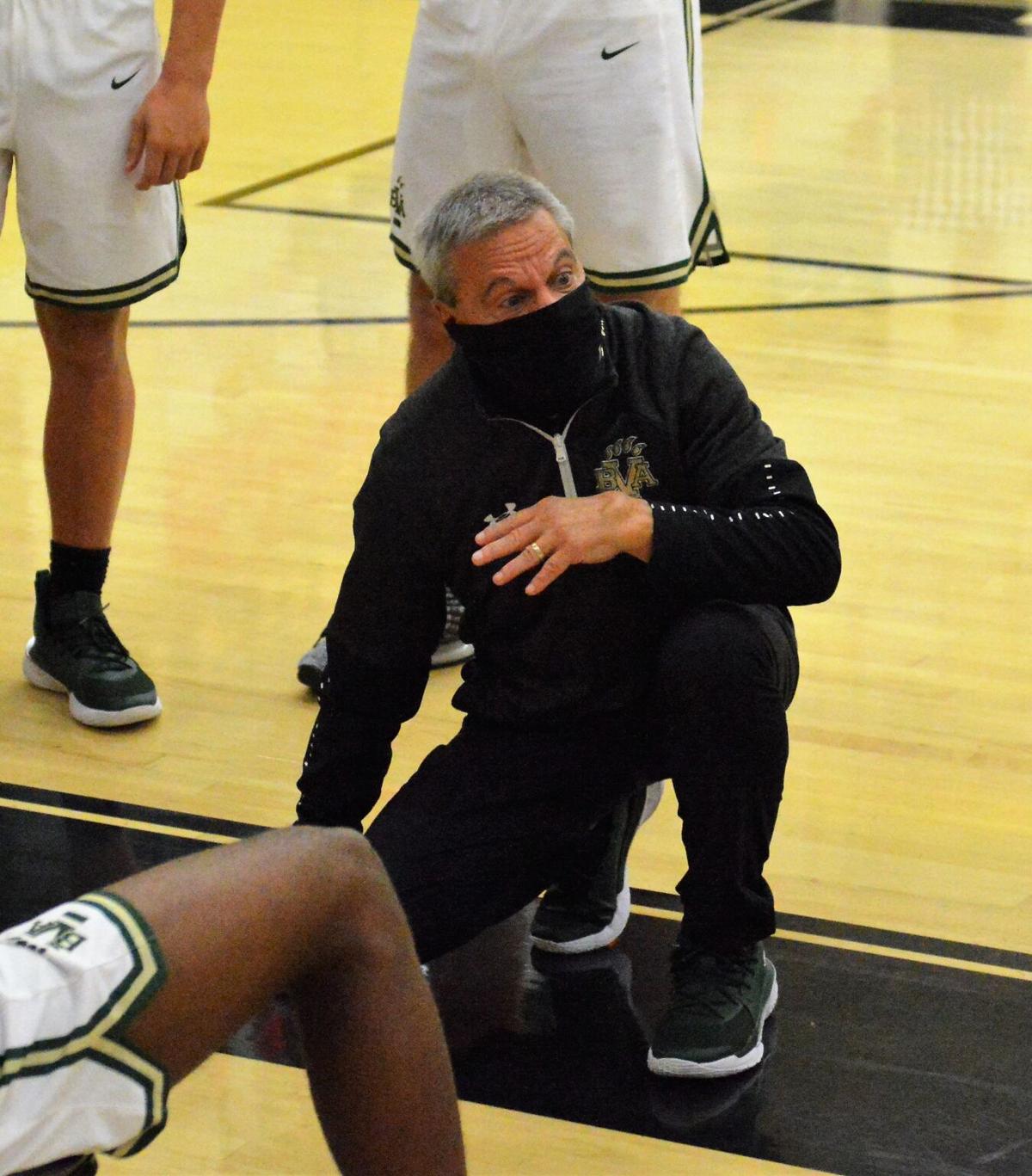 Belle Vernon coach Joe Salvino talks to his players during a timeout in Friday night’s game against Uniontown at Belle Vernon. 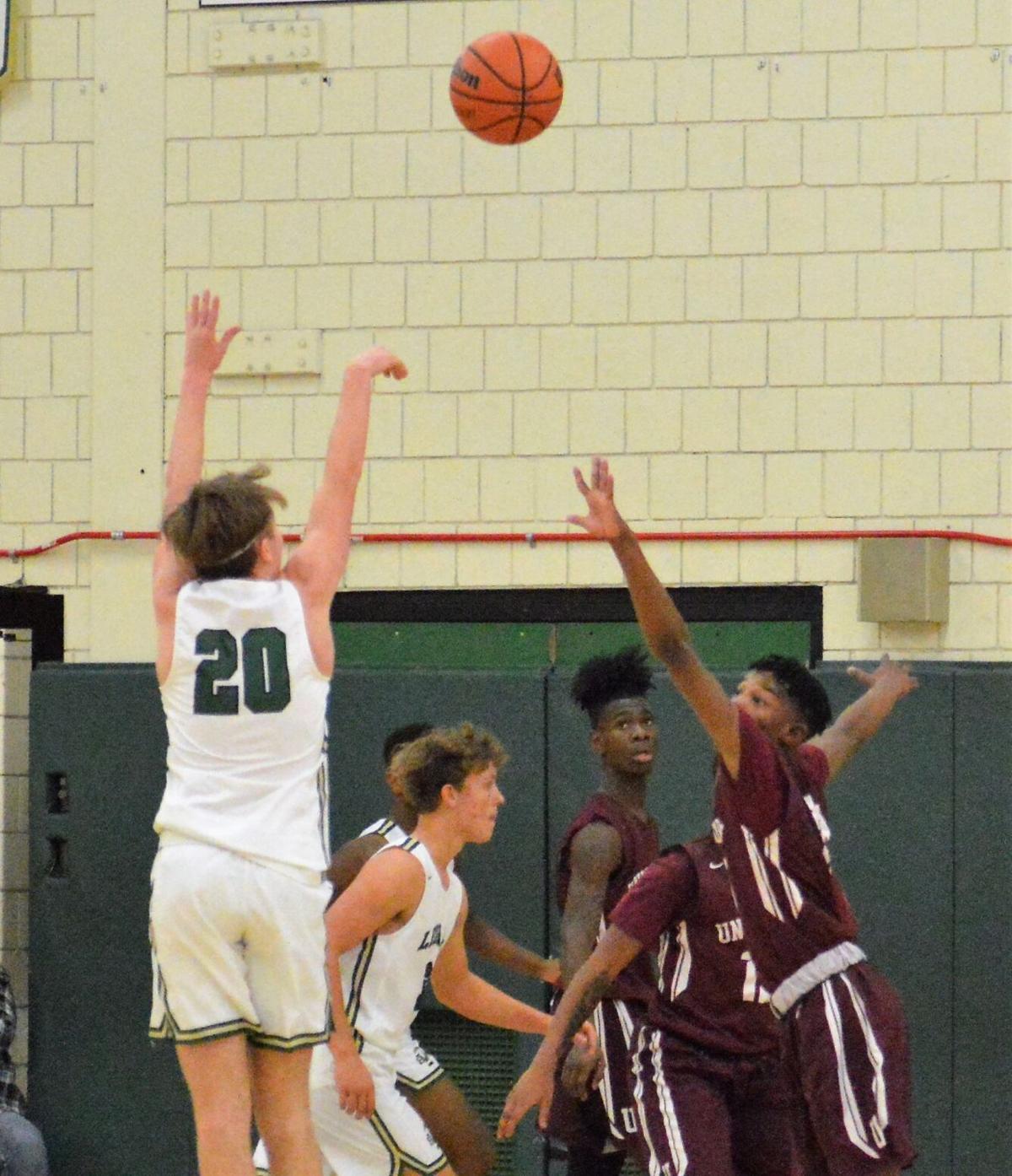 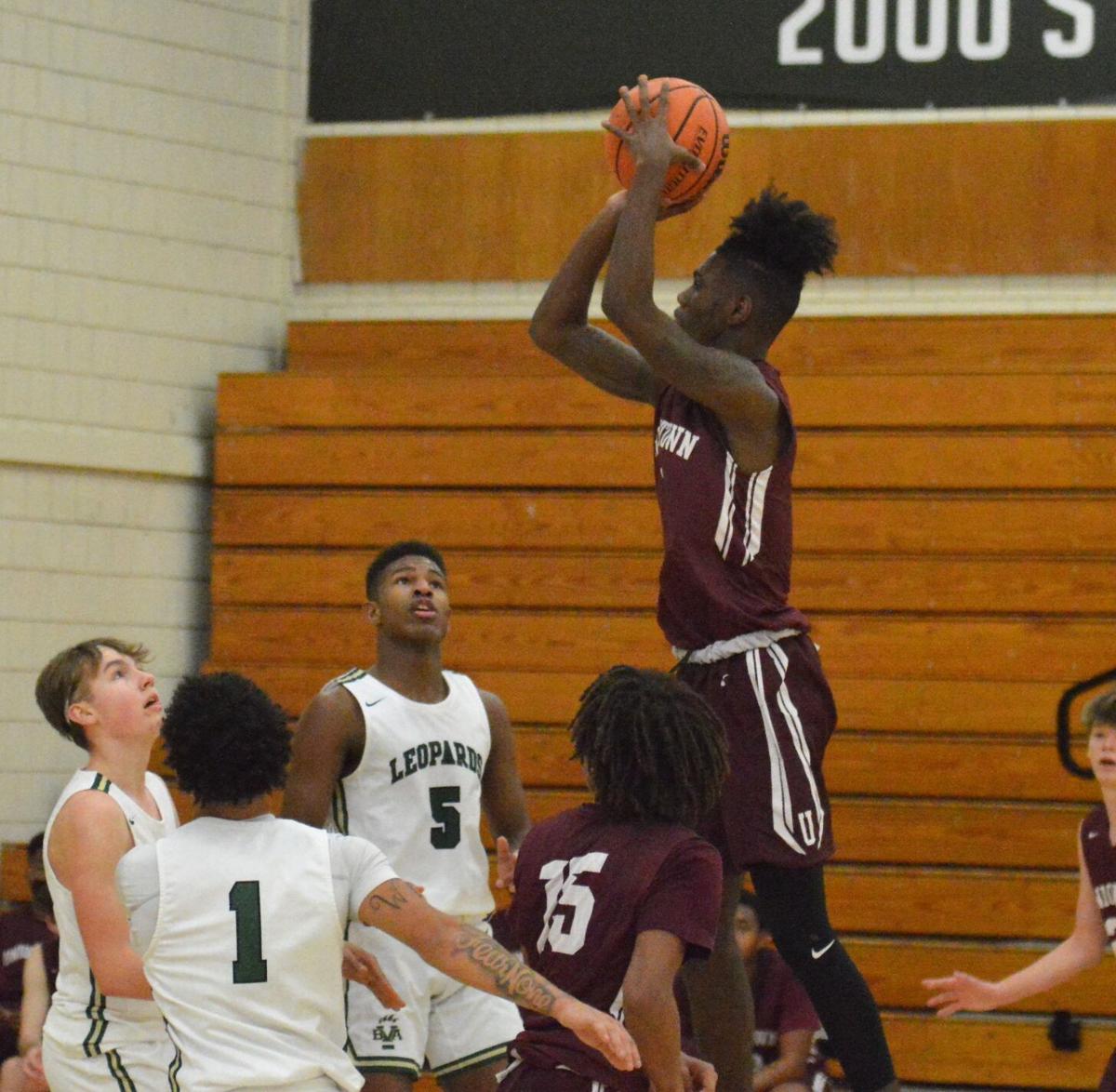 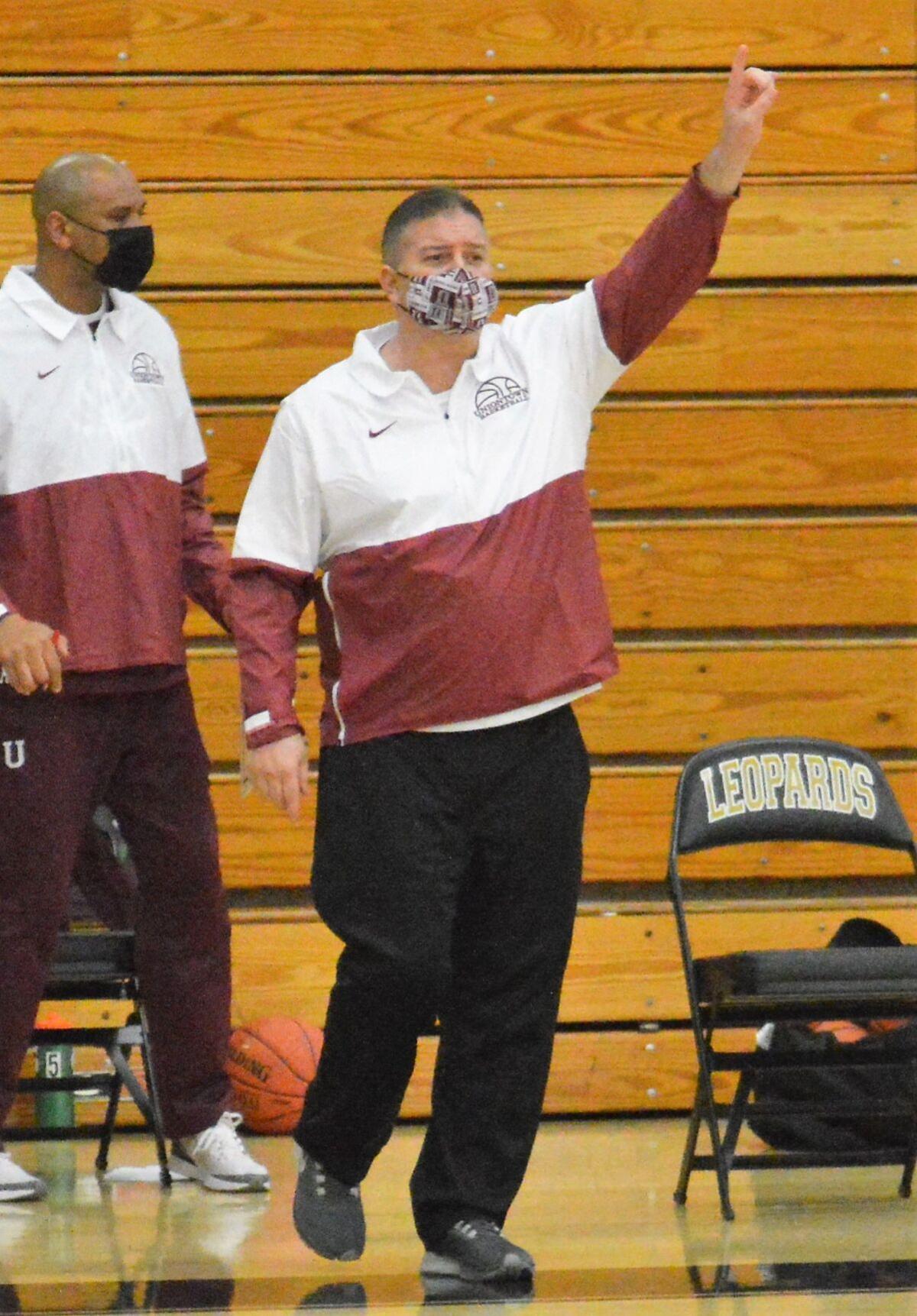 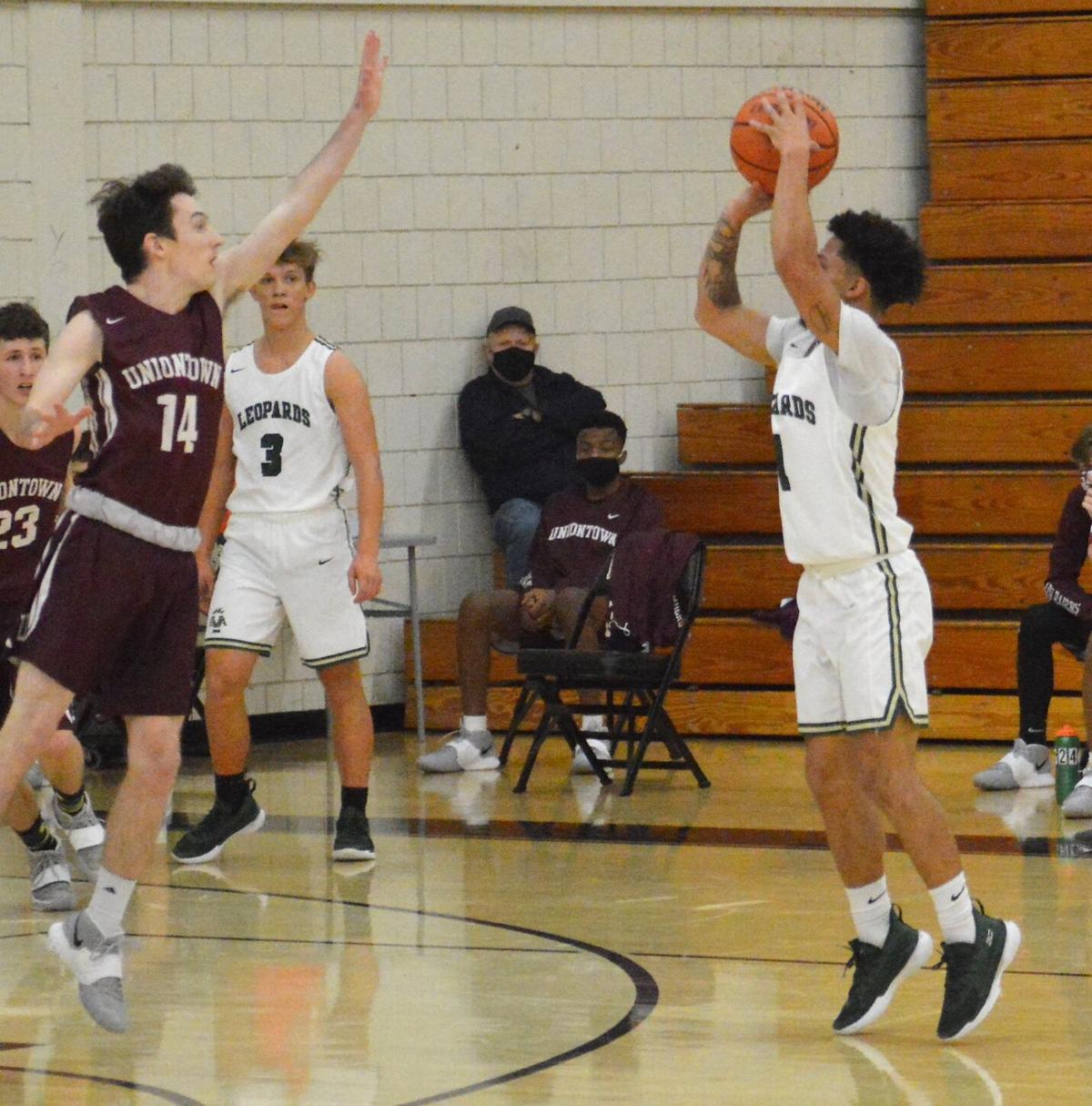 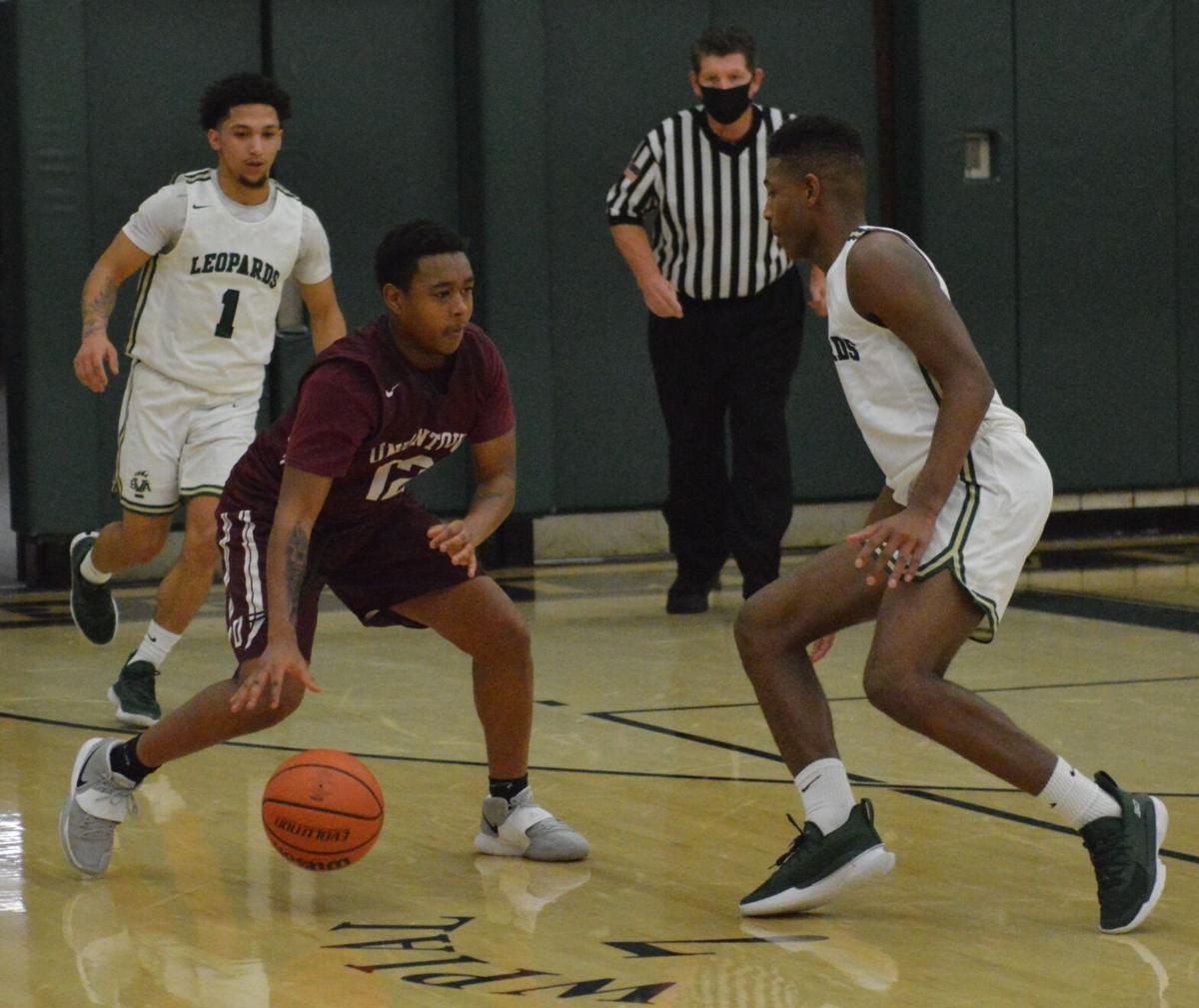 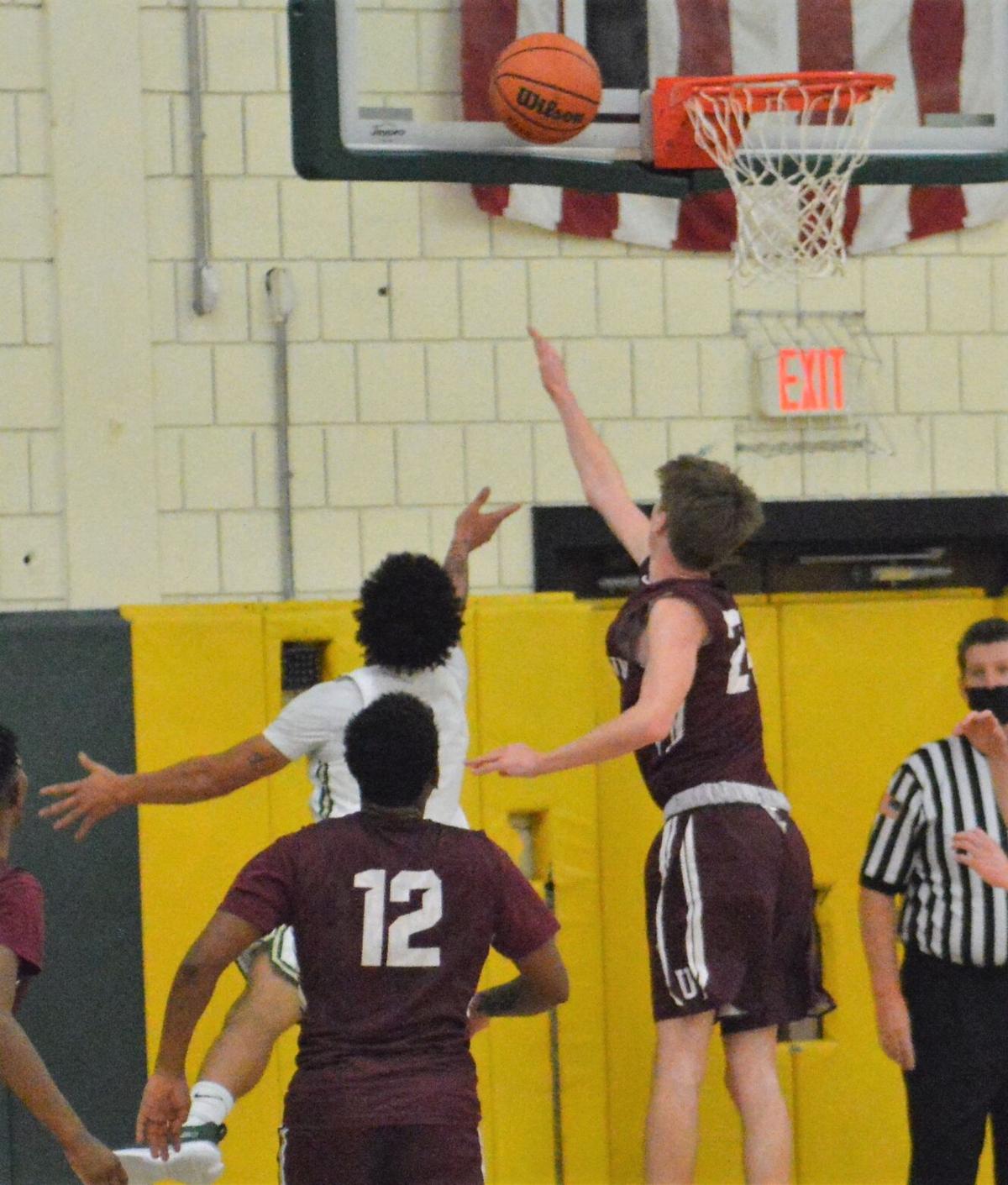 Belle Vernon's Devin Whitlock scoops in a shot in the final seconds of the first half despite the defense of Uniontown's Tanner Uphold during Friday night's game at Belle Vernon.

Uniontown’s Brian Sykes puts in two of his 10 points during Friday night’s game at Belle Vernon.

Belle Vernon coach Joe Salvino talks to his players during a timeout in Friday night’s game against Uniontown at Belle Vernon.

Belle Vernon's Devin Whitlock scoops in a shot in the final seconds of the first half despite the defense of Uniontown's Tanner Uphold during Friday night's game at Belle Vernon.

ROSTRAVER TWP. -- Uniontown had the unenviable task of opening its boys basketball season with an all-new starting lineup on the road against one of the top-ranked teams in Class 4A on Friday.

To make matters worse for the Red Raiders, starting center Christian Perkins was unavailable and senior leader Damarr Lewis was forced to sit out the entire second quarter due to foul trouble.

Belle Vernon took full advantage as Devin Whitlock scored a game-high 23 points and the Leopards rolled to a 67-41 victory in the Section 3-AAAA opener for both teams.

The Red Raiders are coming off back-to-back section championships. The loss was their first in section play since Feb. 6, 2017, also to the Leopards at Uniontown, 62-61.

Belle Vernon finished second in the section last year but soared in the postseason as it reached the WPIAL final and also won a PIAA game.

"They have a lot of guys back and Whitlock is one of the better guards around," Kezmarksy said. "They have some other good players, too. They hurt us defensively inside. We weren't full strength size-wise.

"Besides Damarr, that was the first varsity game for a lot of our players. We started two sophomores (Bakari Wallace and Tanner Uphold) and seniors Brian (Sykes) and Josh (Currey Jones) played as hard as they could. We just have to get a little stronger defensively inside."

The Leopards (1-0, 1-1) never trailed and jumped out to a 7-0 lead on a basket off a rebound by Daniel Gordon and a layup and 3-pointer by Whitlock.

Sykes got the Red Raiders (0-1, 0-1) on the board with a short jumper 1:47 into the game but Belle Vernon pushed the lead up to 11-4 after another Whitlock layup.

Evan Townsend's 3-pointer pulled Uniontown within 15-11 and Lewis scored with a rebound to make it 18-15 before Whitlock hit one of two fouls shots to put the hosts up 19-15 after one quarter. The foul on Whitlock was the third on Lewis and sent him to the bench for the rest of the half.

"We're a different team when he goes to the bench," Kezmarsky said.

Belle Vernon pushed its lead up to 28-17 in the second quarter before Uniontown's Tanner Uphold hit a 3-pointer from the corner to make it 28-20. A basket by Logan Cunningham put the Leopards ahead 30-20 and they would keep the margin in double digits the rest of the game.

The Leopards extended their lead to 49-30 in a slow-paced third quarter and they pulled away with an 18-11 edge in the final frame.

Lewis led the Red Raiders with 15 points and Sykes followed with 10. Curry Jones had five points and Wallace and Uphold both added four points.

It was the second game for Belle Vernon, which lost at home to Thomas Jefferson, 65-59, in a non-section clash on Dec. 11 before Gov. Tom Wolf halted the season due to concerns about the COVID-19 pandemic until Jan. 4 when practices started up again.

"Against Uniontown it's a good win to start off section play," said Leopards coach Joe Salvino, who discussed getting his team back into the flow after the long layoff.

"The first couple days were really hard," Salvino said. "We had some Zoom meetings, went over some film but other than that we didn't do anything (during the break). So our first couple of practices were a little bit lax."

Even so, Salvino was impressed with Whitlock's improvement from the opener.

Salvino also commended Kovatch and Gordon for their performances.

"Tyler did a very good job," Salvino said. "He worked hard on the boards. Daniel didn't shoot the ball very well from the outside but he also rebounded and played good defense."

Salvino saw a stark improvement overall since his team's opener.

"In this game there were a couple lapses here or there but for the most part I thought we played four quarters," Salvino said. "Our intensity was a lot better. The TJ game, we came out strong but we didn't score in the third quarter and our confidence went right downhill so we stopped playing defense. That's what really hurt us.

"I keep on telling them sometimes the ball is going to go in the hole, sometimes it's not but defense is nothing but hustle. So if you can play defense, good things will happen."

Kezmarsky expects his inexperienced team to improve throughout the season.

"We as a team are capable of playing a lot better," he said. "We're looking forward to getting into the gym tomorrow. Our kids will work hard. We're not going to over-react to one game. We'll be OK.

"I told my players, last year we beat them by 27 early in the year but we only beat them by two the second time. So maybe we can reverse that this year and get them when we meet again."

Kezmarsky was just glad to have his players out on the court competing for the first time during the ongoing coronavirus pandemic.

"Tonight's a good night for Uniontown and Belle Vernon just to play a game," Kezmarsky said.

Salvino agreed, adding, "God only knows how many of these games we're going to get to play."

Do you think Republicans and Democrats will work together in the new Congress?