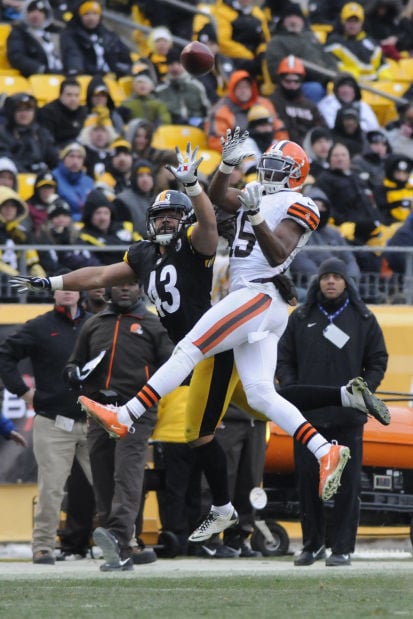 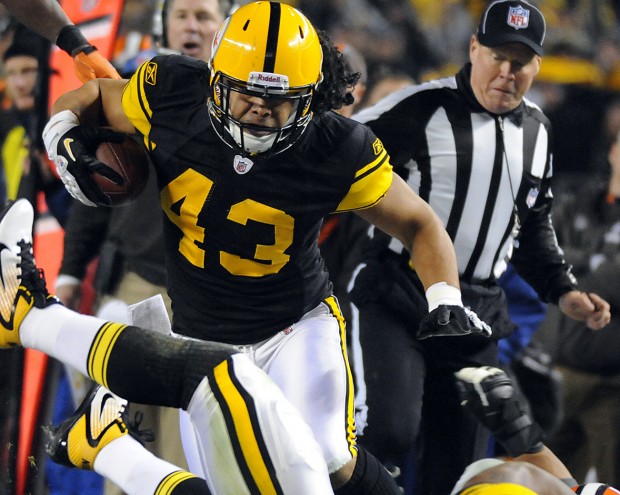 The Steelers’ Troy Polamalu is stopped short of the end zone on an interception return against the Cleveland Browns during a Thursday night game, Dec. 8, 2011, in this Herald-Standard file photo. Polamalu was recently elected to the Pro Football Hall of Fame.

The Steelers’ Troy Polamalu is stopped short of the end zone on an interception return against the Cleveland Browns during a Thursday night game, Dec. 8, 2011, in this Herald-Standard file photo. Polamalu was recently elected to the Pro Football Hall of Fame.

Mike Logan was the starting strong safety in front of Troy Polamalu throughout Polamalu’s rookie season, and then Logan became Polamalu’s primary backup for the next three years with the Pittsburgh Steelers.

Logan was older and more experienced, but found himself checking in — even spying — on how Polamalu was going about his job.

“I used to peek into the room where he was watching film,” Logan said. “I finally went in and asked him, ‘Troy, why are you watching tape of the offensive line?’ He told me he watches all of the tape from all of the angles and that’s how he gets a feel for when, say, to time a jump over the line and stop a quarterback sneak. He just saw how it all was going to happen before it happened. His mind was just amazing.”

Was Polamalu a savant? A genius?

Or did he just watch that much tape?

“Both,” said Logan, who went on to explain Polamalu’s football angles before coming to the important stuff of our 90-minute interview.

Logan explained how Polamalu changed Logan’s life, about how Logan — who grew up in the rougher neighborhoods of Pittsburgh — began taking after Polamalu by first changing his associations, and then changing his habits. Logan said he wasn’t the only one on the team who fell under Polamalu’s spell, either.

Logan experienced some difficulty transitioning out of football “and Troy was the first one to reach out to me.” Logan said Polamalu made him a better person, and that even at age 45 Logan finds himself asking, What would TP do here?

Polamalu was elected into the Pro Football Hall of Fame because of his football genius, but those whom he’s touched rave — absolutely gush — about his humanity.

And Troy was right, because he always had a bit of an edge to him that Heath hadn’t.

When I see the old documentary about a young Bob Dylan with his soft, high-pitched voice mocking journalists, I think of Troy mocking us, taunting us, by throwing out lines like he was going to cheat on his wife, or something similarly absurd. He wanted to see if any of us would bite. Yep, that was his opinion of us — and probably the stereotype fits.

Of course, no one did. The idea of Troy stepping out on his wife just made us chuckle a bit, so his ruses never had a chance of becoming clickbait.

I do remember talking with Troy after Super Bowl 43, the one in which the Steelers beat the Cardinals. I had left a room that Snoop Dogg had just entered. He walked on stage, called Mike Tomlin up, the drum started to beat and the crowd became excited as the players and their entourages closed in for a performance.

Not knowing much about Mr. Dogg’s music, I went outside for some fresh February Florida air. I ran into WDVE’s Randy Baumann, and then Troy happened along. I asked him a football question about Larry Fitzgerald’s late touchdown and Troy began explaining the details — rare for him this far out of the locker room. But they did just win their second championship, so Troy didn’t mind discussing a football play one more time that night.

Baumann was taking it all in, and I’m so thankful because he still has those details in his head for my future reference. I, meanwhile, was watching behind Troy the most beautiful woman in the room. She was wearing blue. Dark hair. Elegant. Young. Sweet. She was waiting patiently for Troy to stop talking so she could say hello. When she got her minute, she told him what a fan she was, and asked for a hug. Troy said no thank you.

I may have been more surprised than this young woman, who looked like she had just been told no for the first time in her life. She did a c’mon-just-a-hug thing, but Troy smiled and said quietly, “My heart belongs to another.”

Oh, don’t get me wrong. Troy has snapped at me. One time fellow DB Anthony Smith hit Chad Johnson so hard during a game in 2007 that Johnson’s gold teeth tumbled onto the field. Polamalu bent down, gathered them up off the turf and handed them to Johnson after he got up.

I watched through binoculars from the pressbox, received confirmation from Smith that it was teeth, and asked Polamalu about it.

What did you pick up for Chad? Were those teeth?

“Well, why did you ask me then?” Polamalu bit as he curtly cut me off.

He was caught in a white lie because, as he explained, “I don’t want it to be a part of a big story, no.”

We staggered through a few more questions and Polamalu apologized. “Sorry. Bad interview,” he said.

I just chuckled because no matter how dull and honest some football interviews can get, Troy Polamalu never gave a bad interview. There was always something interesting in his words, no matter how much he dumbed them down.

Of course, in football, in sports, lying to the press becomes part of a player’s job, and that’s why Troy hated talking about injuries. He would have to tell a white lie at some point, for tactical reasons, and the pain on his face always gave him away.

I figure that’s why I could never get him to talk about the deep details of his life, about his father who left him the day he was born for his other family, about how his mother took him to Oregon and abandoned him at a young age, about his older, taller, equally athletic brother who couldn’t successfully navigate the streets of Santa Ana outside of Los Angeles and came to know more about gang life than team life.

Troy’s not going to lie about them, nor is he going to speak ill of them, so it’s understandable that he doesn’t speak publicly about any of it.

Hey, we’re talking about a descendant of Samoan royalty here. In the new book “Tropic of Football,” author Rob Ruck traced Troy’s lineage back to the “tui Manu’a,” Samoa’s supreme title-holder whose own lineage is linked to “the origins of the Samoan people.”

Not that we’re surprised Troy Polamalu can be traced to mythological gods, but he would probably snap back at me were he to hear those words. After all, the true Samoan warrior strives for the concept of fa’a Samoa, the gentlemanly behavior old-school islanders seek to achieve. Nor would Troy allow any of that talk of lineage to penetrate his impenetrable faith in Jesus Christ as his savior.

This Hall of Fame stuff no doubt wreaks havocs with Troy’s personal rhythms of fa’a Samoa and Christianity. All he really wants to do is love his family and work in his garden back home in Southern California.

Will he ever return to Pittsburgh?

I have no doubt. He was upset about being released following the 2014 season. He was still sore at ownership about how the previous contract negotiation had been handled, and the release — before he felt his football shelf life had been used up — added to that soreness.

“And don’t expect me to come back for any of your stuff!” Troy told Art Rooney II the day he left Steelers headquarters for the final time.

Troy told me the back story when he called with the news of his retirement. One of his mentors, Dick LeBeau, had done something similar a month or so earlier. LeBeau called a hometown reporter to let him announce LeBeau’s retirement. It was a classy move by a classy guy, and I’ve always believed that’s why Troy called me to announce his retirement.

But he didn’t just dump the news on me. He worked with me to ensure that I could hold the story until the time was just right. Troy even called Dan Rooney and asked that he not tell anyone until I released my story.

Yes, THAT’s the kind of person we’re talking about here.

But the beauty of Polamalu is that he sees his flaws. He knows he doesn’t possess the pure humility of a Heath Miller, that he does have angry voices in his mind that must be tamed.

Of course, Heath Miller never became the conscience — the Holy Spirit, if you will — of a football dynasty.

In leading the Steelers to the biggest stage in sports three times during his career, Polamalu also sparred publicly with ownership for letting his first partner, Chris Hope, go. He also sniped publicly with the coaching staff for allowing the offense to change its physical approach into a passing fancy run by young Ben Roethlisberger. Polamalu insisted that it hurt the defense, because, frankly, the defense couldn’t receive the rest required to go back on the field and utilize its Blitzburgh-style mentality on every single snap.

Troy also barked about Alan Faneca not receiving a better contract offer before the greatest guard in team history left in free agency.

But Troy was also the voice who told me to withhold judgment on Roethlisberger after those awful allegations in 2010. It wasn’t that Troy wondered about the truth; he was just “excited” to see how Roethlisberger would use this crossroad to change his life for the better. And I have no doubt that Troy’s proud of the direction Ben has since taken and the family he’s raised.

Troy Polamalu was about winning, of course, but he was also about humility, redemption, admitting his own flaws, working to fix them, and so much more.

Troy Polamalu wasn’t just the key playmaker of a great team, he was the conscience of a dynasty. He made those around him better players AND better people.

What more can a football player do?