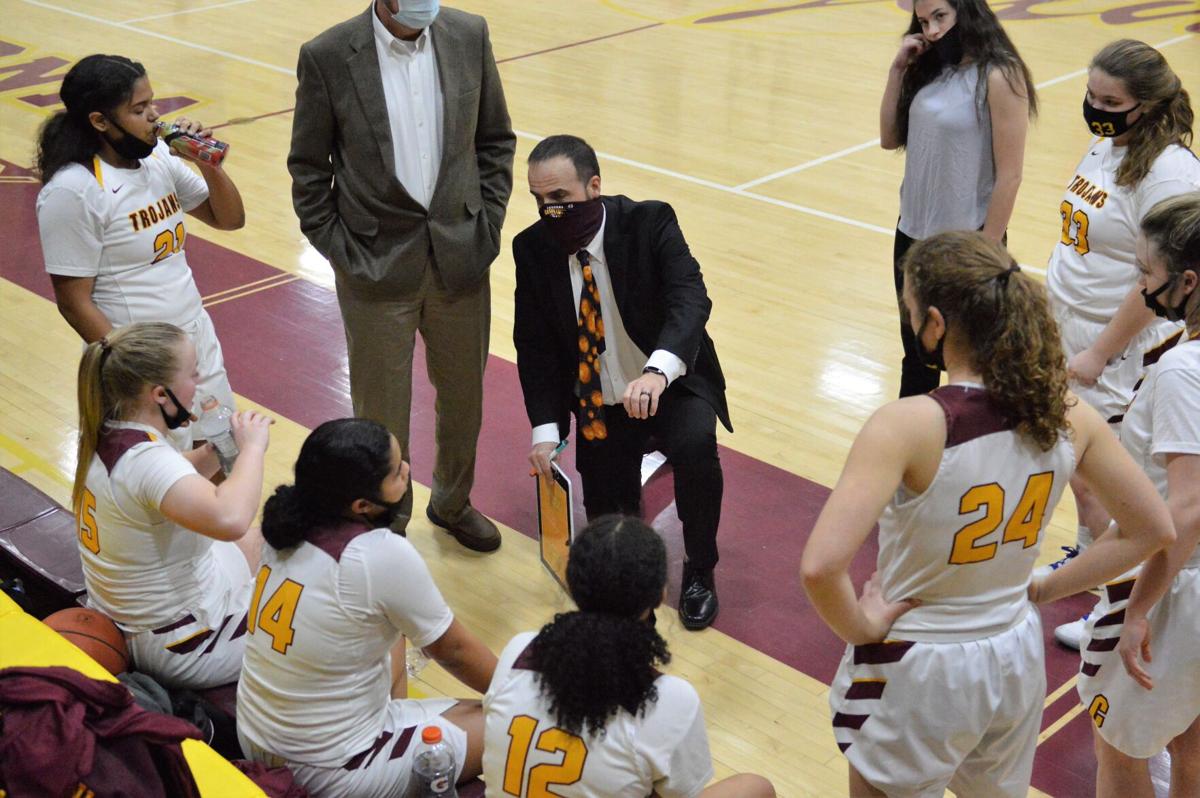 California coach Chris Niemiec talks to his player during a timeout in a WPIAL playoff game against Fort Cherry at California on March 2. The Lady Trojans won, 50-43. Niemiec has decided to step down as coach after three seasons. 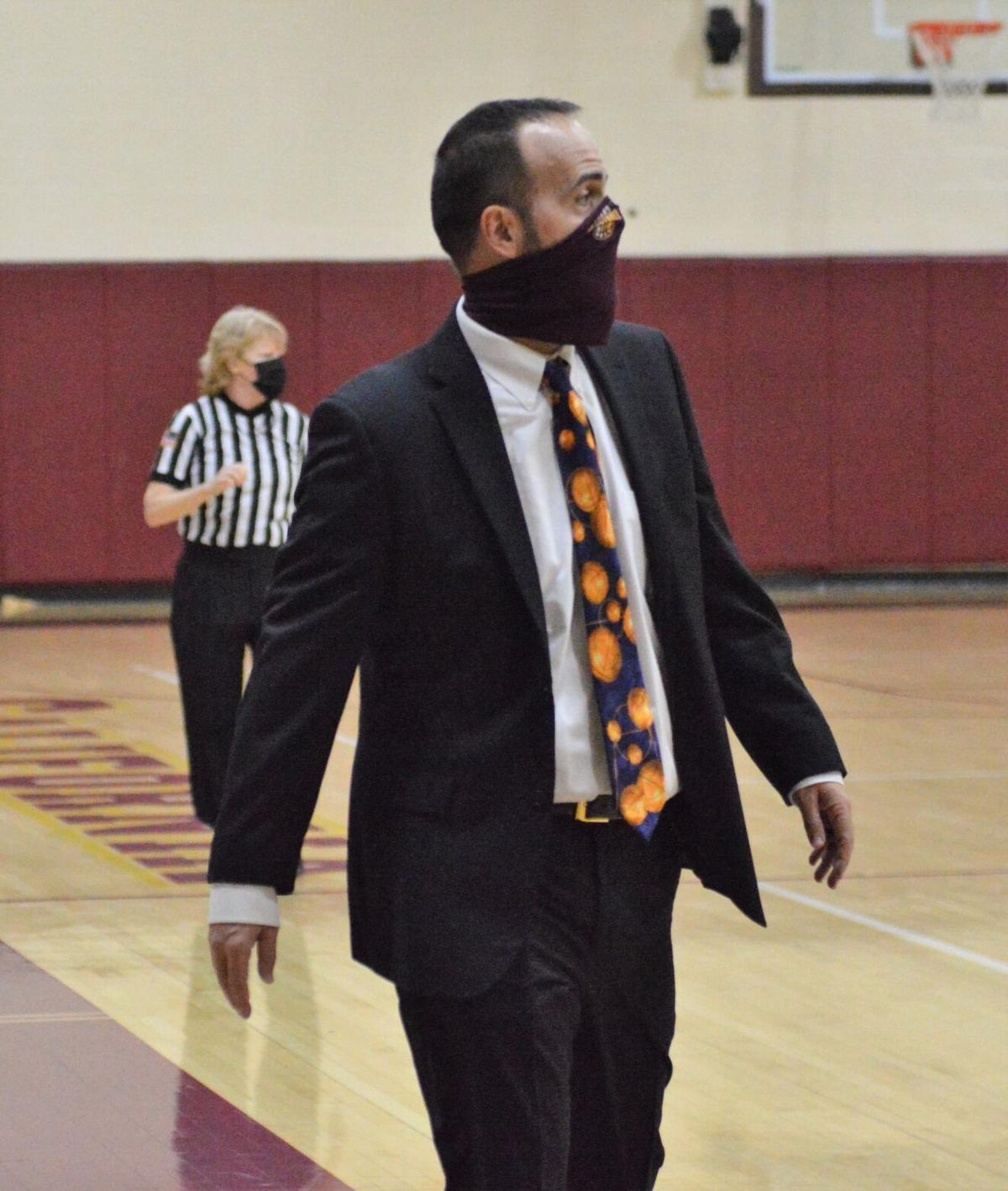 California coach Chris Niemiec, sporting the perfect tie for the occasion, watches the action as his Lady Trojans battle Fort Cherry during a WPIAL playoff game at California on March 2. The Lady Trojans won, 50-43. Niemiec has decided to step down as coach after three seasons.

California coach Chris Niemiec talks to his player during a timeout in a WPIAL playoff game against Fort Cherry at California on March 2. The Lady Trojans won, 50-43. Niemiec has decided to step down as coach after three seasons.

California coach Chris Niemiec, sporting the perfect tie for the occasion, watches the action as his Lady Trojans battle Fort Cherry during a WPIAL playoff game at California on March 2. The Lady Trojans won, 50-43. Niemiec has decided to step down as coach after three seasons.

The California Area girls basketball program is looking for a new head coach.

Wednesday afternoon, Chris Niemiec announced that he was stepping down after leading the team for the last three seasons.

He said several factors played into his decision, including his young family, work and the fact that he is dealing with a health issue.

“CJ turned four May 1st, he just started playing T-ball, was in swimming classes and his activities are growing,” said Niemiec. “During the season, Ashley had to handle the whole schedule, including events for Lauren.

“With me trying to help, I don’t believe I would have had the time to properly prepare the team’s day-to-day activities, strategize, do films and everything else that comes with being a coach, so it is time.”

Niemiec spoke about being the CFO for The Efficiency Network and the health issue he has quietly been dealing with.

“My normal job requires 50-plus hours a week,” he said. “I am also in an on-going battle with Non-Hodgkin’s Lymphoma that requires quarterly chemotherapy sessions, so there are plenty of factors involved.”

During his three years at the helm, the Trojans went 34-26 and won two playoff games.

Niemiec, who has also served as the head coach with both the Jefferson-Morgan boys and girls programs, said that coaching the Trojans meant the world to him and that he will miss the players.

“Taking over for Chris Minerd, who wanted me to take over for him, meant the most because he had confidence that he could step down and the tradition would continue,” he said. “Of everything I will miss, I will miss the girls the most because I have some strong connections to many of my old players.

“I will miss the day-to-day talks, the funny things players talk about, their nicknames, their responses, all of it, as well as the camaraderie with other coaches.”

This past season, the Trojans went 11-4, including 7-1 in Section 2-AA, where they finished second behind WPIAL runner-up Serra Catholic. The Trojans defeated Fort Cherry in a WPIAL first-round playoff game before losing to eventual WPIAL champion and PIAA runner-up Neshannock.

Niemiec joked about how the team was undefeated this year in their six home games and how there were limited fans in attendance at most games.

“Maybe having no fans was the secret ingredient,” Niemiec said through laughter. “It was a challenging year, with the start, stop and start again.

“But it was a great team and a great group of players. We lost four games, and three were to teams that played for WPIAL championships.”

While Niemiec said the 2020 playoff win over Greensburg Central Catholic was his highlight as the coach at California, he feels that he will be back on the sideline at some point.

“I think I will coach again someday,” he said before transitioning to next year’s California team. “They will be a playoff team next year if they work hard as there is plenty of playoff experience returning.

“I will be pulling for them.”