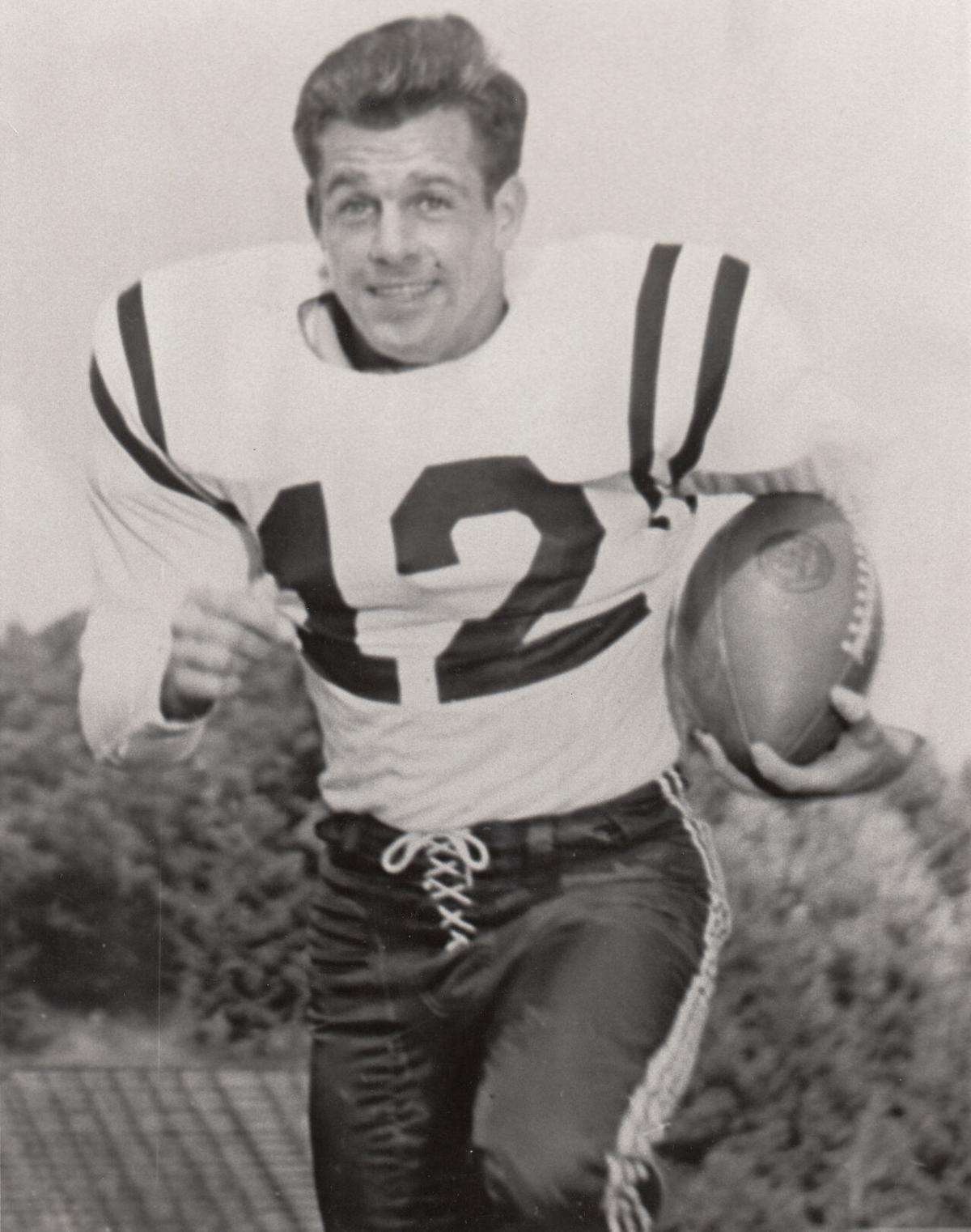 Uniontown graduate Jim Shaner is shown during his playing days at Fairmont State. 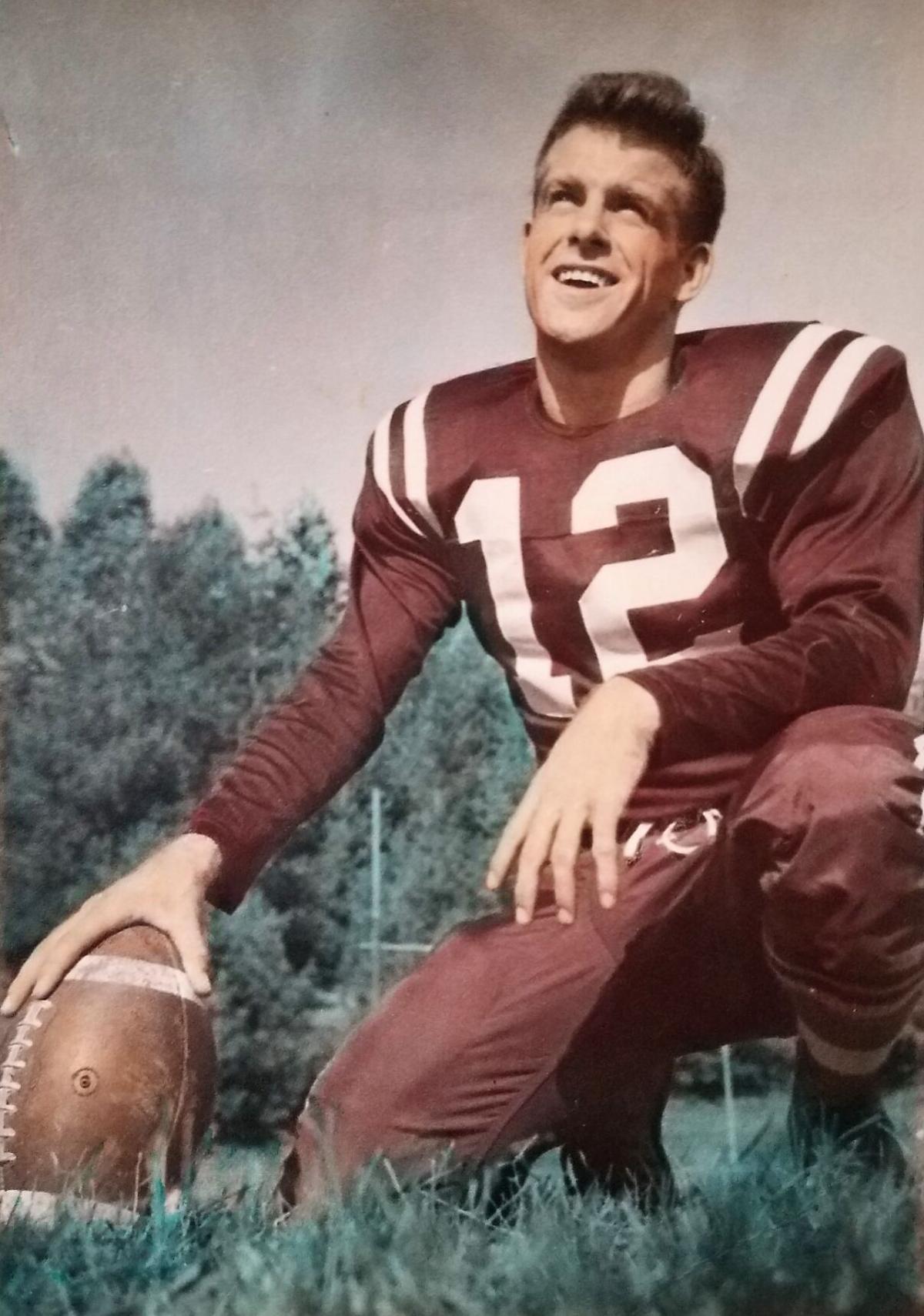 Jim Shaner was a football star at Uniontown and Fairmont State. He is part of the Uniontown Area High School Academics, Arts & Athletics Hall of Fame Class of 2021.

Uniontown graduate Jim Shaner is shown during his playing days at Fairmont State.

Jim Shaner was a football star at Uniontown and Fairmont State. He is part of the Uniontown Area High School Academics, Arts & Athletics Hall of Fame Class of 2021.

The Uniontown Area High School Academics, Arts & Athletics Hall of Fame was formed in 2013. After taking a year off due to the coronavirus pandemic, the organization has chosen a Class of 2021. Although there will be no ceremony held this year, the new inductees will be honored through the Herald-Standard in a series of stories.

In athletics size can sometimes be deceiving. A good example is the late Uniontown High School athletic standout Jim Shaner.

The diminutive Shaner was listed at 5-foot-6 and 155 pounds, but he cast at giant shadow for the Red Raiders in football and track and in The Fayette County Baseball League.

Shaner was on Uniontown football squads that were starting to emerge as a force to be reckoned with under the late Bill Power. He was on Red Raider teams that posted records of 5-5 in 1952 when Shaner won the starting halfback job late in the season.

Shaner had a knack for coming up with outstanding performances in big games. In his senior year he scored two touchdowns to keep the Raiders in the Class AA race in a 21-6 win over Washington. Shaner broke open a tight game with Monessen with a 67-yard TD scamper and rushed for 91 yards on 10 carries in a 33-13 victory. He scored touchdowns on a 31-yard run and a one-yard plunge in the Red Raiders’ 20-0 win over Monongahela. Shaner scored the winning touchdown in a hard fought 12-7 win over Dunbar.

In a Memory Lane story from 2011 John Meegan the outstanding Dunbar Mule singled out Shaner.

“Jim Shaner was a fine ballplayer for Uniontown and scored the winning touchdown to beat us in 1954,” Meegan recalled.

The Uniontown track team also benefited from Shaner’s athleticism. He was a standout performer helping to lead the Red Raiders to consecutive Fayette County Track & Field championships as a junior and a senior. Shaner’s events were the 100-yard dash, the 220 and 380 relay.

When Shaner graduated from Uniontown his size prevented many schools from looking at him for football. He turned up at Fairmont State after sitting out for two years and fashioned a Hall-of-Fame career for the Falcons. He lettered in football and baseball for the Falcons from 1957 to 1960.

Shaner led the team in scoring with 31 points and receptions with 12 in 1958. Fairmont State had two undefeated seasons, 1957 and 1959, and won two league championships during Shaner’s career.

In baseball, Shaner played shortstop and helped lead the Falcons to WVIAC championships in 1958 and 1960. He helped Fairmont State to a memorable 8-3 win over West Virginia. He clouted a home run and a single in that game his freshman year with the Falcons.

During his freshman year Shaner was called on to fill in on the track team when they were short a 100-yard dash man.

Coach Duval said, “Jim was reluctant to run the 100-yard dash since he hadn’t practiced the event for sometime, but agreed when asked and was told the regular century man was being saved for the 220.

“He went out and won the race and in the process outran a boy who had defeated him in the scholastic ranks.”

After he graduated from Fairmont State, Shaner went into teaching and coaching. He was an assistant at Kenton, Ohio. He returned to teach physical education and was an assistant at Uniontown High School. He was the backfield coach for the Red Raiders’ unbeaten 1965 WPIAL championship team.

Shaner taught for Intermediate Unit I at Connellsville High School.

He owned and operated the Ye Olde Inn, a restaurant in Dunbar Township.

Shaner, a Democrat, was elected to represent the 52nd Legislative District, which includes portions of Fayette and Westmoreland counties, beginning in 1994. Shaner underwent heart bypass surgery in October 2005. He announced his retirement in February 2006, citing health concerns.

In 2010 Shaner and the 1965 WPIAL champion Uniontown Red Raiders football team were inducted into the Fayette County Sports Hall of Fame. In 2014 he was inducted posthumously for Football and Baseball into the Fairmont State Athletic Association Hall of Fame.