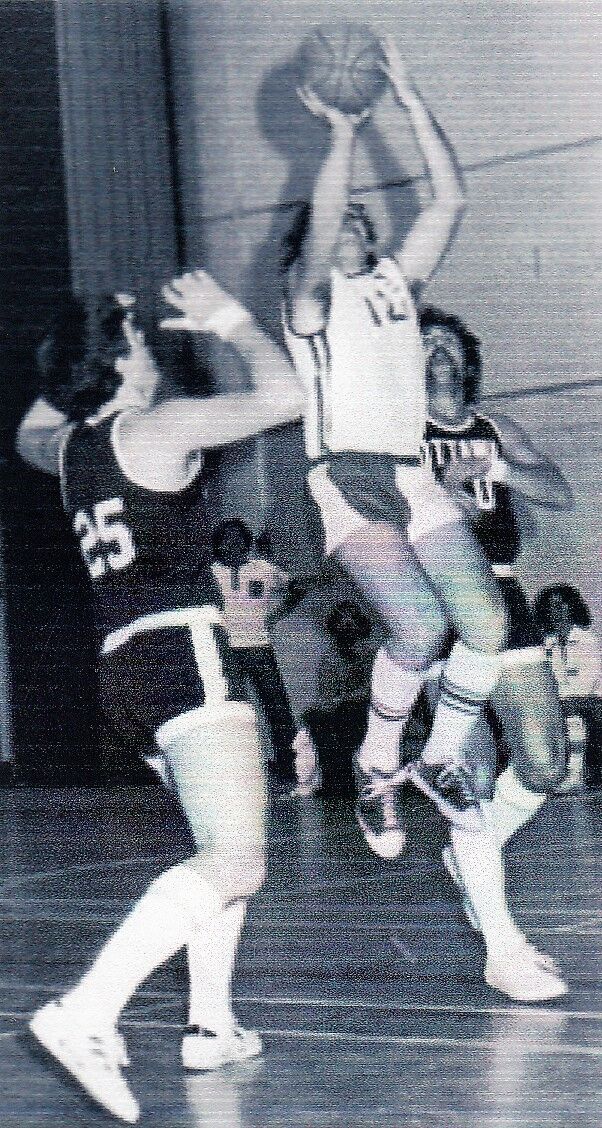 Joe Prah is shown during his playing days at McGill University.

Joe Prah is shown during his playing days at Saint Vincent College.

Joe Prah is shown during his playing days at McGill University.

Joe Prah is shown during his playing days at Saint Vincent College.

“He was like your All-American boy,” former St. John’s teammate Mel Robinson opined. “He was pretty clean cut and he had a real good attitude about things. He was an outstanding student.”

Prah was part of St. John’s PCIAA Class C State championship team in 1965, but did not see any varsity action that season. St. John’s posted a 15-9 record overall, but was 7-1 in Greensburg Diocesan League play. That left the Eagles and Connellsville Father Geibel tied for the top position. The Uniontown club won a playoff for the right to move into the PCIAA tournament.

St. John’s prevailed in the playoff game against Geibel, 74-63. Then came three of the most exciting, most heart-stopping tournament games any team ever played with St. John’s coming from behind in the fourth quarter in all three, 73-70 over St. Francis of Clearfield, 80-72 over St. Joseph’s of Mount Oliver, and finally 64-62 in the championship game with Williamsport St. Joseph.

Mark John, who was an assistant coach for his uncle, the legendary James “Lash” Nesser, remembers Prah well.

“Joe Prah had a great work ethic,” John said. “He was a great young man.”

Prah notched 165 points his junior season at St. John’s and tallied 267 points as a senior, including a career-high 24 points in a 76-54 win at arch rival Father Kolb.

“Joe wasn’t as tall as most of players we were competing with at that time,” former Eagles teammate Ken Boyle said. “He made up for it with endurance and he was a very good shot. He was a smooth shooter from far out. He was quiet and methodical.”

“He was a good floor general,” Woleslagle said. “He was the play-maker my junior year and he played a lot as junior. Prah was a listener and he had total control and he ran the team. He wasn’t a turnover machine. You could bet he would get the ball to you. He was a great little ballplayer.”

Reportedly Prah was a great teammate and friend.

“He was a sweetheart of a guy,” Boyle explained. “We used to shovel snow off the court when we were younger during the winter and play basketball.”

“He was a gym rat,” Woleslagle added. “He had keys to the gym, I don’t know how he got them, but he had a key to get into the gym and get into the cage where the equipment was and he would call me and several other guys and say do you want to go shoot around? We’d do it when school was closed or on the weekend. He was a gym rat and he ended up giving me those keys after he graduated.”

Prah played for the North squad in the Fayette County Coaches Association All-Star game on March 29, 1967. He had 10 points in the game as the North downed the South, 79-75.

Following his graduation from St. John’s Prah went to Saint Vincent College and played basketball for four years. He played on the freshman squad for coach Harry Miller in 1967-68 on a team that posted a record of 11-13.

In 1968-69 Prah spent most of the season on the JV team that finished 7-8. He scored 128 points. Playing off the bench on the Saint Vincent varsity in 1969-70 Prah notched 95 points as the Bearcats finished 9-15. Coach Bernie Matthews took over as head coach during Prah’s senior season and the Bearcats went 10-13 in 1970-71. Prah missed almost half the season with injuries, he got his first start against Waynesburg and responded with nine points. In 15 games Prah had a total of 44 points, 17 rebounds and 20 assists.

A Divinity student, Prah went to McGill University in Montreal Canada to pursue a master’s degree only to discover to his surprise he was eligible for further collegiate play. Prah was a key player on the 1971-72 McGill University basketball team, which operated on a shoestring budget after having been dropped the previous season.

As the story goes McGill Daily student reporter Ira Turetsky and future head coach Sam Wimsner decided to revive the program. Prah offered steady shooting — he rarely missed a free throw — and a sense of when to take control of a game. The duo uncovered some unexpected hoops talent on campus, including Prah and fellow Pennsylvanian John Naponick, a 6-foot-9 behemoth who was studying to be a doctor.

Naponick was the former Norwin star who helped engineer one the biggest upsets in WPIAL history when the Knights upset Uniontown in the WPIAL tournament.

Prah played two seasons at McGill before graduating in 1973. In his first season at McGill, 1971-72, Prah returned from a month-long layoff with a broken hand to help the Redmen upset the heavily-favored Loyola College Warriors, 73-71, in the Quebec University Athletic Association conference finals. That league title arguably saved the Redmen program. The Redmen finished that season with a stellar 18-7 record overall en route to becoming the first McGill basketball team to qualify for the CIAU national championship tournament (now known as CIS Final Eight), where they finished fourth overall.

The McGill players wore mismatched uniforms and personal warm up outfits, including one player who preferred a paisley kaftan while Prah was known for a Kentucky Fried Chicken T-shirt and Naponick for a wool uniform.

A 5-foot-10, 175-pound point-guard, Prah was described by teammates as a great floor leader, someone who could dissect opposition defenses with ease and often come up with big defensive stops. His presence made everyone else better.

“Joe was the ultimate teammate,” former McGill coach Wimisner said. “He’s such a lovable guy. He was that, and more.”

Prah became a high school counselor in Lennoxville, Quebec where he lived with his family and coached high school basketball. He also coached the Champlain College Cougars, a Cegep (junior college) team.

Prah died at a hospital in Montréal on April 11, 2014 after a lifelong struggle with common variable immunodeficiency. He was 63.