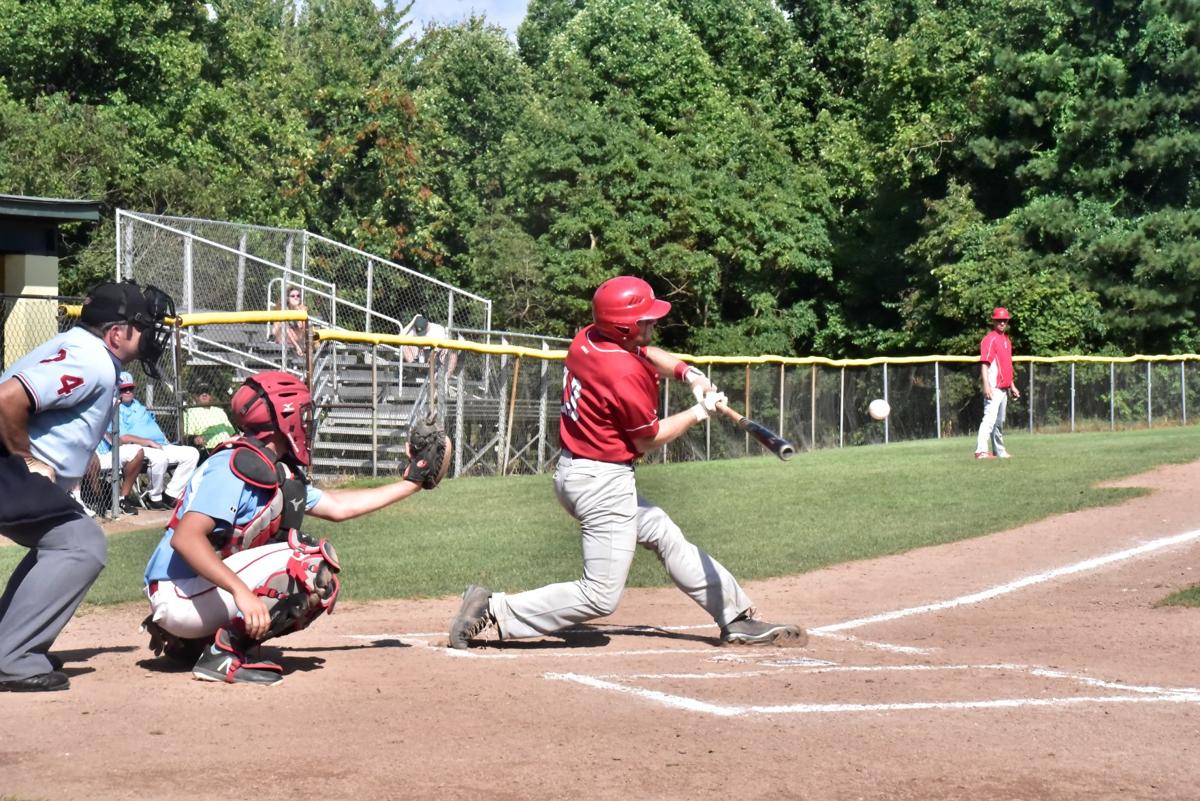 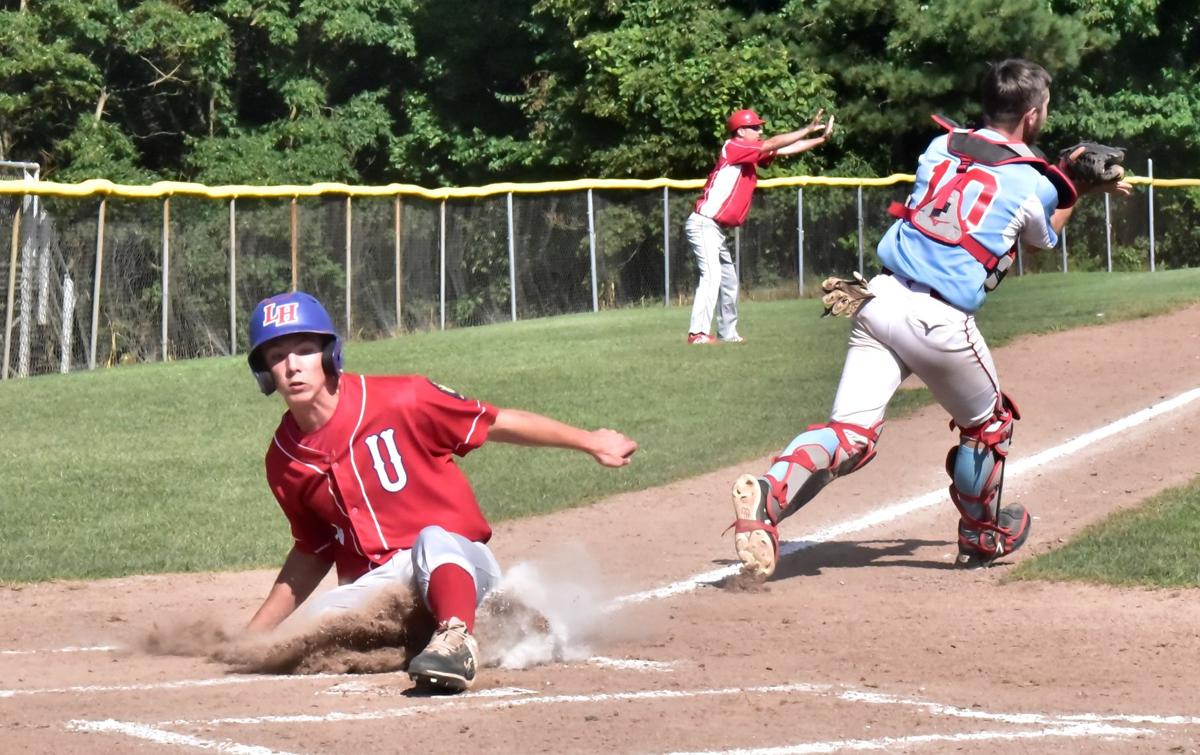 Nick Kumor scores the first run for Uniontown in its game against Hopewell on Tuesday in the Pennsylvania American Legion Region 6 Tournament at Chippewa Park. Uniontown saw its season come to an end with a 6-3 setback. 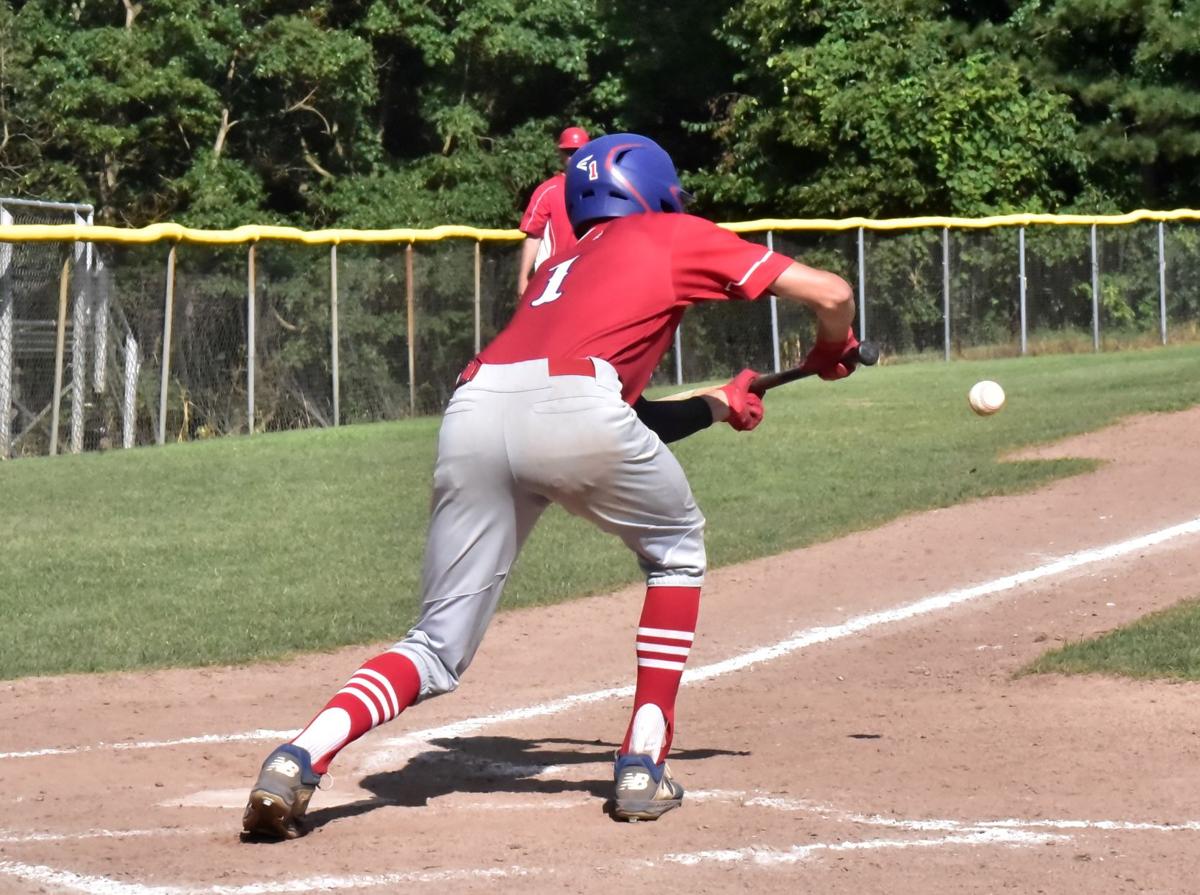 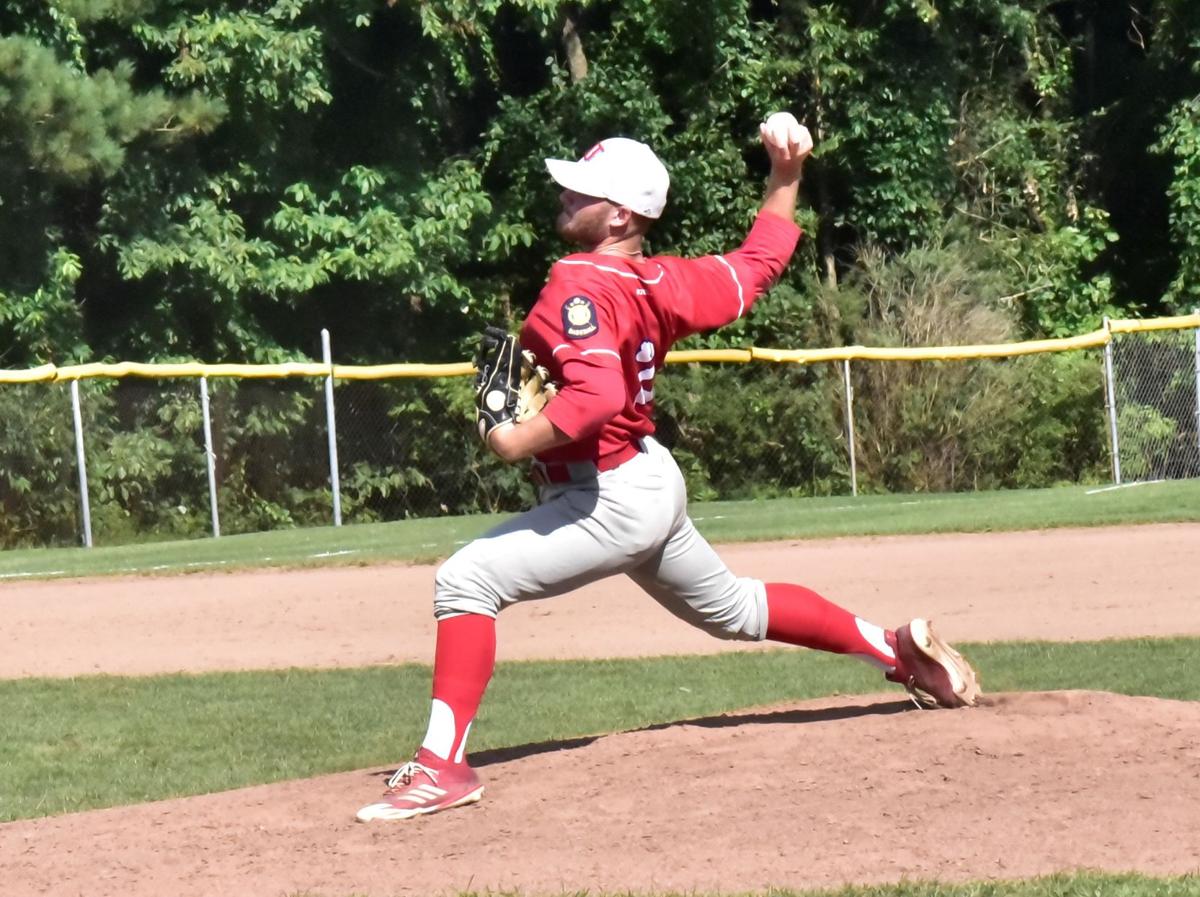 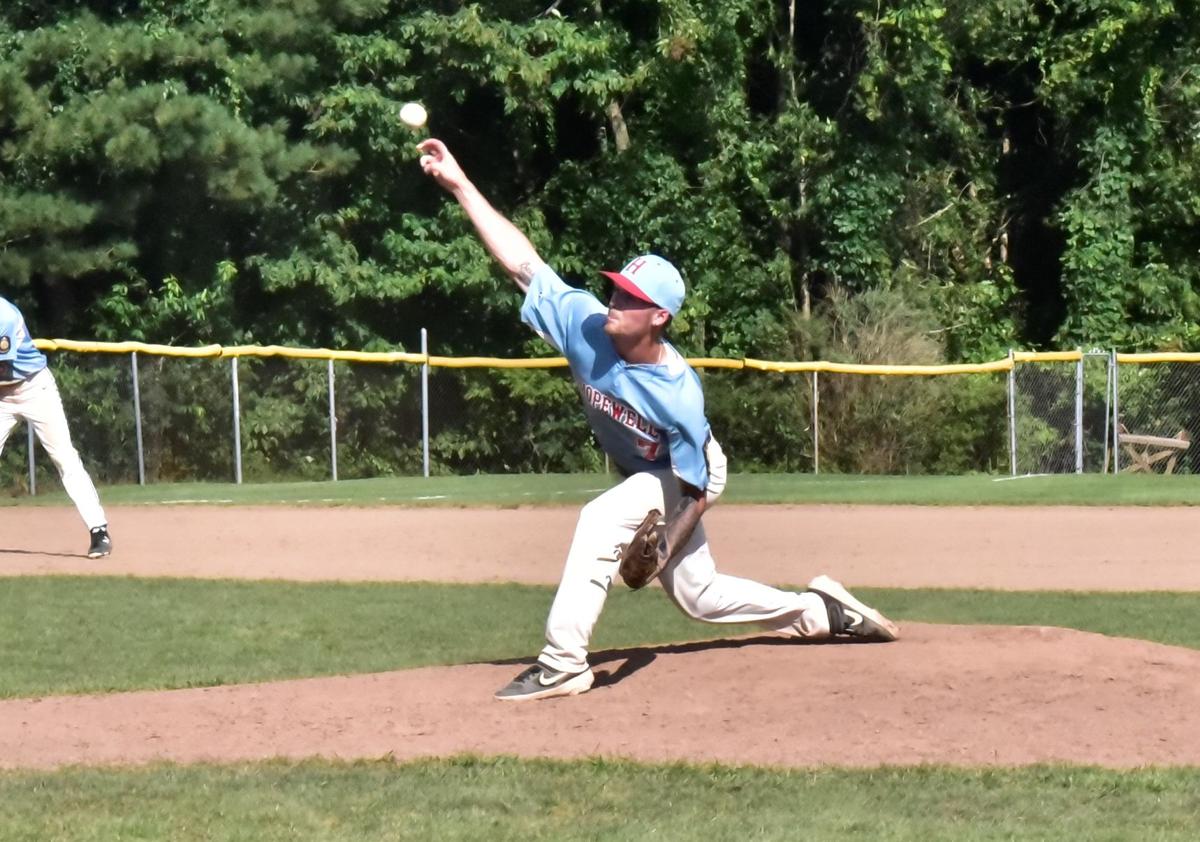 Hopewell’s Alex Kunzmann allowed one run over 5 1/3 innings in his team’s 6-3 victory over Uniontown on Tuesday’s in Pennsylvania American Legion Region 6 Tournament play at Chippewa Park.

Nick Kumor scores the first run for Uniontown in its game against Hopewell on Tuesday in the Pennsylvania American Legion Region 6 Tournament at Chippewa Park. Uniontown saw its season come to an end with a 6-3 setback.

Hopewell’s Alex Kunzmann allowed one run over 5 1/3 innings in his team’s 6-3 victory over Uniontown on Tuesday’s in Pennsylvania American Legion Region 6 Tournament play at Chippewa Park.

BEAVER FALLS — Uniontown’s opportunity to advance to the state tournament for the third time in five years ended Tuesday evening in a 6-3 setback to Hopewell at Chippewa Park in the Pennsylvania American Legion Region 6 Tournament.

Hopewell advanced to the championship game on Wednesday against host Blackhawk.

Uniontown’s season ends at 22-5 overall and 18-0 in league play. Uniontown was the Fayette County American League regular season and playoff champion, but fell short of its goal to get to the DuBois’ Showers Field and the state tournament.

“We go 3-2 in the tournament, and in two of the wins, we scored a combined 23 runs, the other one, we only scored two runs, but in a great pitchers’ duel, it’s baseball,” Uniontown manager Brad Yohman said. “We had three tough games in this tournament. We score two runs and won, one run and lost and three runs and lost.

“You really have to score probably five or more runs almost every game in this tournament. It’s really, really hard to win, I don’t care who you play, with less than four or five runs a game. It doesn’t allow us to put pressure on the other team. We hit the ball hard, but right at guys.”

Uniontown jumped out to a 1-0 lead on Hopewell starter Alex Kunzmann in the top of the first inning, but Kunzmann settled down and didn’t allow any more runs in his remaining 4 1/3 innings. He allowed one run (none earned) on three hits in 5 1/3 innings. He had two strikeouts and walked five in throwing 105 pitches.

Kunzmann was pulled in the sixth due to pitch-count restrictions and replaced by Anthony Lasala.

“When you are not scoring runs, there is probably a reason on the other side,” Yohman said. “Kunzmann stepped up and threw a great game for them. Sometimes, you just get beat. He shut us down and shut down a good lineup. That’s how baseball goes.”

Hopewell took a 4-1 lead with four runs on two hits in the fourth off Uniontown starter Greg Lancaster.

Kunzmann and Palumbo walked before scoring on Casey Jones’ double to center field for a 2-1 advantage. Nate Statler reached on an error, Mark Philippi was intentionally walked and Jones scored on Anthony Slate’s sacrifice fly to center for a 3-1 lead.

Josh Miklos was walked and Statler scored on Lasala’s base hit up the middle for the fourth run.

“Greg did his job and did everything we needed him to do,” Yohman said. “Once they put a couple of runs up, it allows their guy to get a little more relaxed on the mound, and it kind of shows.”

Hopewell extended its advantage in the fifth with two runs on one hit. Jones and Statler walked and Jones scored on a wild pitch. Statler scored on Slate’s run-scoring double.

Uniontown cut the deficit to 6-3 in the sixth inning when Dylan Bohna and Santino Marra scored on Alex Gesk’s double to right field. Gesk also singled. Bohna reached on a fielder’s choice and Marra singled in the sixth.

Brestensky sent down Hopewell in order in the bottom off the sixth inning, but Uniontown couldn’t score in the seventh after Brestensky reached on an error with two outs.

Uniontown took its early lead with two outs in the first when Nick Kumor reached on an error, Nate Zimcosky walked and Kumor scored on Chad Petrush’s single past the third baseman’s glove.

Yohman believes a bigger first inning may have turned the tied and put more pressure on Kunzmann. Uniontown also had the bases loaded in the second, but couldn’t score. Yohman’s team left 10 runners on base.

“I think we had the bases loaded and Nick (Kumor) hits a line drive, but it’s right at a guy,” Yohman said. “If we get a base hit in that situation, that may change the whole complexion of the game. I think that’s the story of how we lost these games the past couple of days.

“You hate to see it end this way. Obviously, we had higher aspirations and wanted to make another run at states. I feel for guys like Chad (Petrush), Greg (Lancaster) and Michael Brestensky. This is it for them; it’s the last game of their Legion careers.

“I feel for guys like Alex Gesk and Dylan Bohna. Senior guys that can come back, but you never know what happens in a year. We look ahead and we have a young group coming back, and we will make a run at it next year. We will keep working and keep coaching until we can get a state title.”