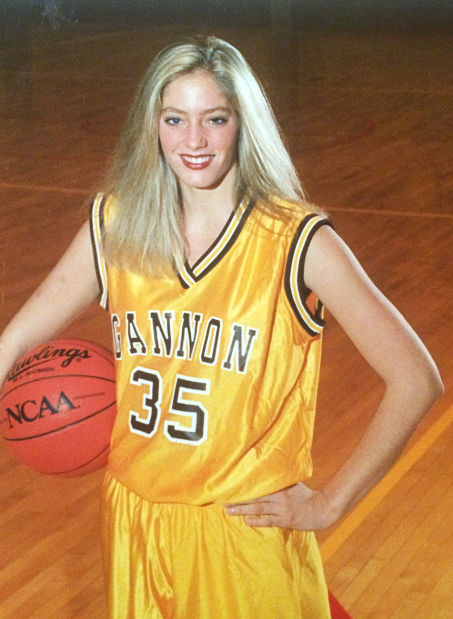 Geibel Catholic graduate Shelley Bortz is shown during her playing days at Gannon University. Bortz was the leading vote-getter in the Fayette County Sports Hall of Fame Class of 2020/2021 member voting and will be joined by 12 other new inductees. 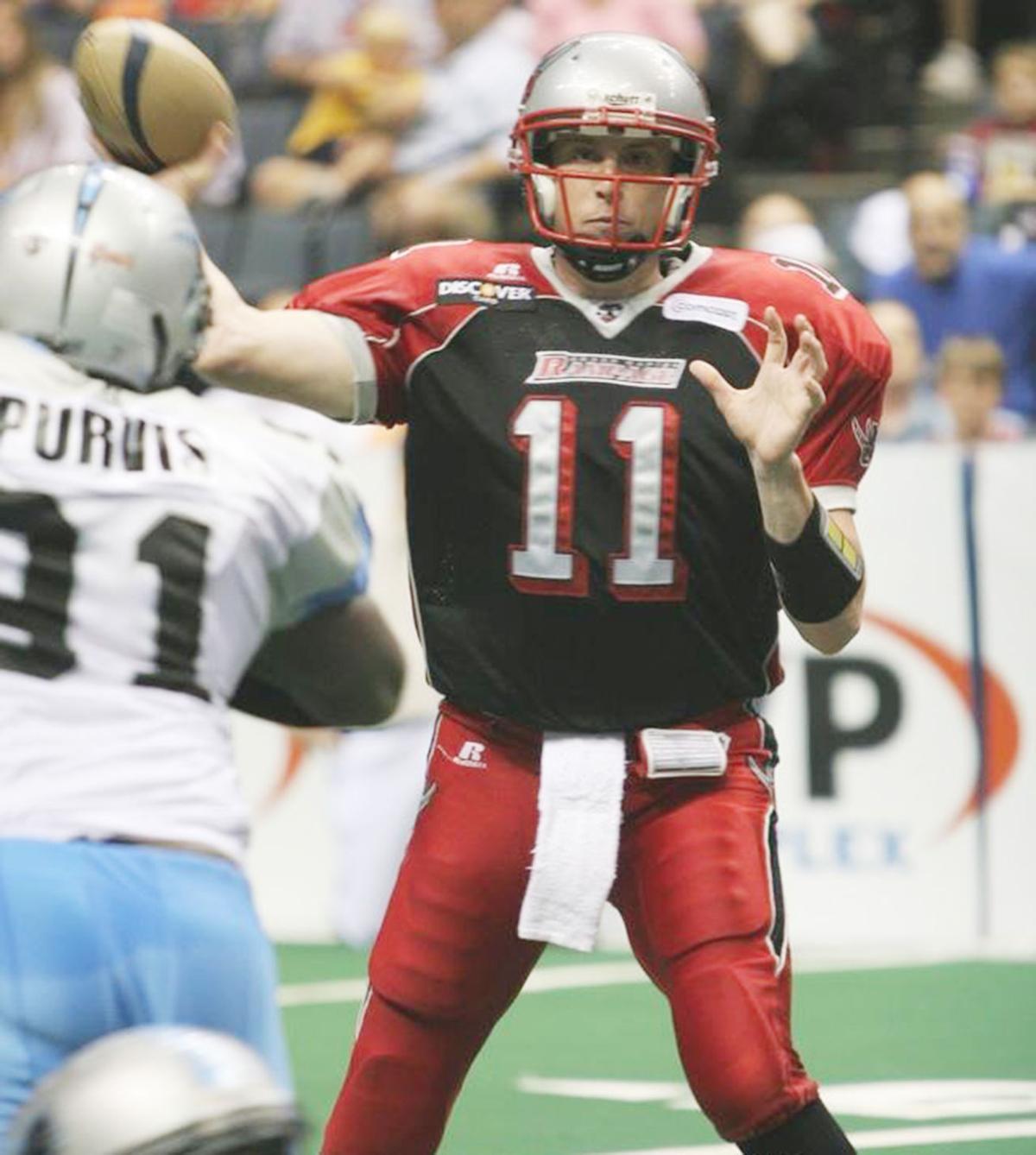 Frazier graduate Chad Salisbury is shown during his Arena League playing days. Salisbury is one of 13 members of the Fayette County Sports Hall of Fame Class of 2020/2021. 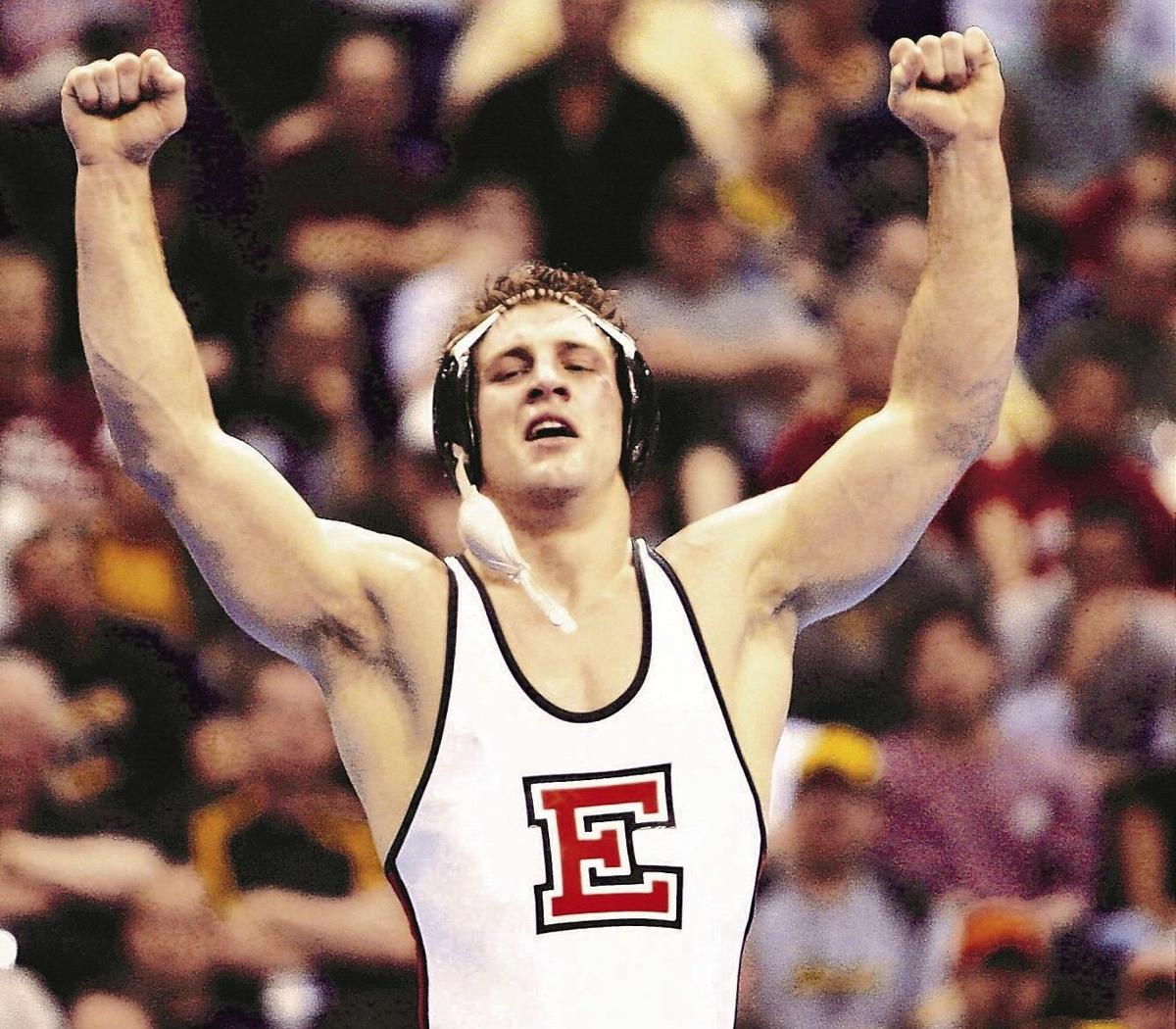 Connellsville graduate Jarrod King of Edinboro University raises his hands after winning the 165-pound title at the 2009 NCAA Division I Wrestling Championships.

Geibel Catholic graduate Shelley Bortz is shown during her playing days at Gannon University. Bortz was the leading vote-getter in the Fayette County Sports Hall of Fame Class of 2020/2021 member voting and will be joined by 12 other new inductees.

Frazier graduate Chad Salisbury is shown during his Arena League playing days. Salisbury is one of 13 members of the Fayette County Sports Hall of Fame Class of 2020/2021.

Connellsville graduate Jarrod King of Edinboro University raises his hands after winning the 165-pound title at the 2009 NCAA Division I Wrestling Championships.

The Fayette County Sports Hall of Fame is back with another stellar group of inductees and uplifting news for next year.

The Class of 2020/2021 has been introduced and is headlined by Geibel Catholic graduate Shelley Bortz, the leader among Hall of Fame membership voting.

“We’re off and running again,” said Hall of Fame Executive Chair/Co-Founder George Von Benko. “For our 12th year this remains a very, very strong class. There’s great quality in this group. If you look at the cross-section it’s a diverse class.”

Von Benko also announced that, although there will be no banquet this year due to COVID-19 restrictions, the banquet is already set to be held next year on June 18, 2022, once again at Penn State Fayette, The Eberly Campus.

“Inductees from this year’s class will be honored at next year’s banquet,” Von Benko said.

As for this year, the 13 new inductees and representatives will be recognized at the Hall of Fame golf outing/luncheon/social on June 25, starting at 9 a.m. at Pleasant Valley Golf Club in Connellsville (to attend, see details at the end of this story).

The group will be enshrined through Von Benko’s Sports Line Talk Show (heard every Saturday from 10 a.m. to noon on WMBS radio), the Herald-Standard, the Hall of Fame web page (www.fayettecountysportshalloffame.com) and the new Hall of Fame Facebook page.

Shelley Bortz joins George Bortz as the first father-daughter combo in the Hall of Fame. The only father-son combo is Gene Franks Sr. and Donald “Doc” Franks. Shelley Bortz was a standout basketball player for the Lady Gators and at Gannon University.

Bodnar was a track and cross country stalwart for the Mustangs and Pitt. Brooks was a basketball star for the Lady Falcons and James Madison.

George Clemmer is the first golfer to be inducted into the Hall of Fame. She played for the Lady Raiders and at Kentucky. Jackson was a track star for the Red Raiders.

Kershey was a Hall of Fame basketball and track & field coach at Coatesville High School. King was a standout wrestler for the Falcons and Edinboro University. Salisbury had a star-studded career with the Commodores and then at New Mexico State and Buffalo in college before moving on to arena football.

Donnelly was a successful football and basketball coach at German Township, winning a WPIAL title in the former. Kell was a star football player for the Uhlans who also played at Pitt. Lemansky was a trailblazing boys soccer coach for the Mustangs.

Following are additional highlights on each of the new inductees:

Basketball: Totaled 1,360 points and 900 rebounds at Brownsville. ... Earned all-section and All-WPIAL honors. ... Four-year letter-winner at James Madison where she was a team captain her junior and senior seasons. ... 642 points, 360 rebounds and 57 blocked shots in JMU career. ... Inducted into the first Brownsville Hall of Fame class in 2015.

Basketball: Tallied 1,534 points and over 1,500 rebounds in career at Frazier.

Basketball: Starter his junior season on team that lost to Aliquippa in the playoffs, snapping a 52-game winning streak. ... His senior season the Red Raiders lost to Schenley in the PIAA Western Finals in double overtime, 71-67. ... Uniontown won the WPIAL title, beating McKeesport 81-63.

Football: Standout tackle for the Uhlans. ... Went on to play at Pitt. ... 1938 All-City College Grid Team. ... Team captain his senior year and was again named to the PITT NEWS All-City Team. ... Named to several “All Opponent Teams” along with selection to the Eastern College All-Star Team. ... All-Star named to play in the first annual “Smoke Bowl Game.” ... Passed on pro football and became a dentist.

Track: As a senior at German he retained the county record set the previous year and also established a new discus record of 123 feet, 9 inches. ... Won two first-place medals at the WPIAL competition at Pitt Stadium in 1937, one for discuss (127-0) and one for shot put (47-1¾). ... Double gold-medal winner at the PIAA championships in both the discus and shot put. ... Also participated in track at Pitt.

Track/Cross Country: Captured WPIAL championships in 1988 in the mile and two-mile events. ... Won WPIAL title in cross-country in 1988. ... Ran track at the University of Pittsburgh. ... All-American at Pitt, ran in NCAA cross country championships. ... Ran in the Olympic Trial Marathon in 1996 and 2000. ... Was a member of the US National Cross Country team at the World Championships in 1998. ... Has run six Boston Marathons, several Pittsburgh Marathons, as well as New York and Chicago. ... Won a marathon in 2013 in Asheville, N.C.

Football/basketball: Also lettered in football and basketball for Red Raiders.

Coach: Started the Laurel Highlands High School soccer program in 1987. ... Coached the Mustangs until 2000. ... In 14 seasons, Lemansky compiled a coaching record of 120-113-11. ... LH made the playoffs in 1992, 1994, 1997 and 1999. ... Lemansky won coach of the year honors in 1992. ... The Mustangs pulled off one of the biggest upsets in WPIAL playoff history in 1992 defeating top-seeded Mt. Lebanon, 1-0. ... LH was the first soccer program in the county. ... Helped organize other high school and junior high teams in the county. ... Helped organize and coach the Fayette County Youth Soccer Association and YMCA. ... Coached a traveling team on Cup level, one of which qualified for the state playoffs and premiere status.

Those interested in attending the Fayette County Sports Hall of Fame golf outing may contact Katie Propes by email (kpropes@occluss.com) or phone (724-415-2211).