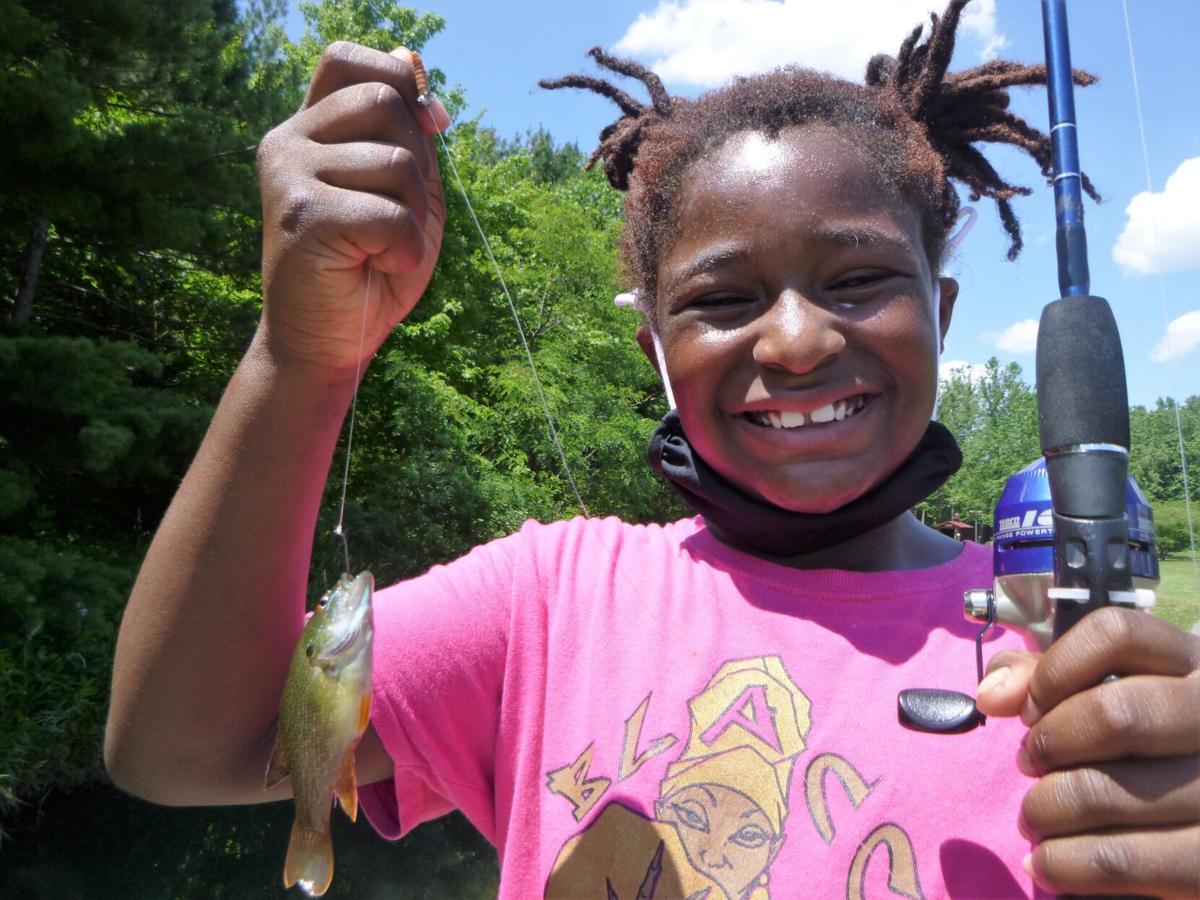 Kaliyah Marks, 8, of Uniontown, holds a pumpkinseed sunfish she caught during a trout-fishing outing organized by Chestnut Ridge Chapter of Trout Unlimited. 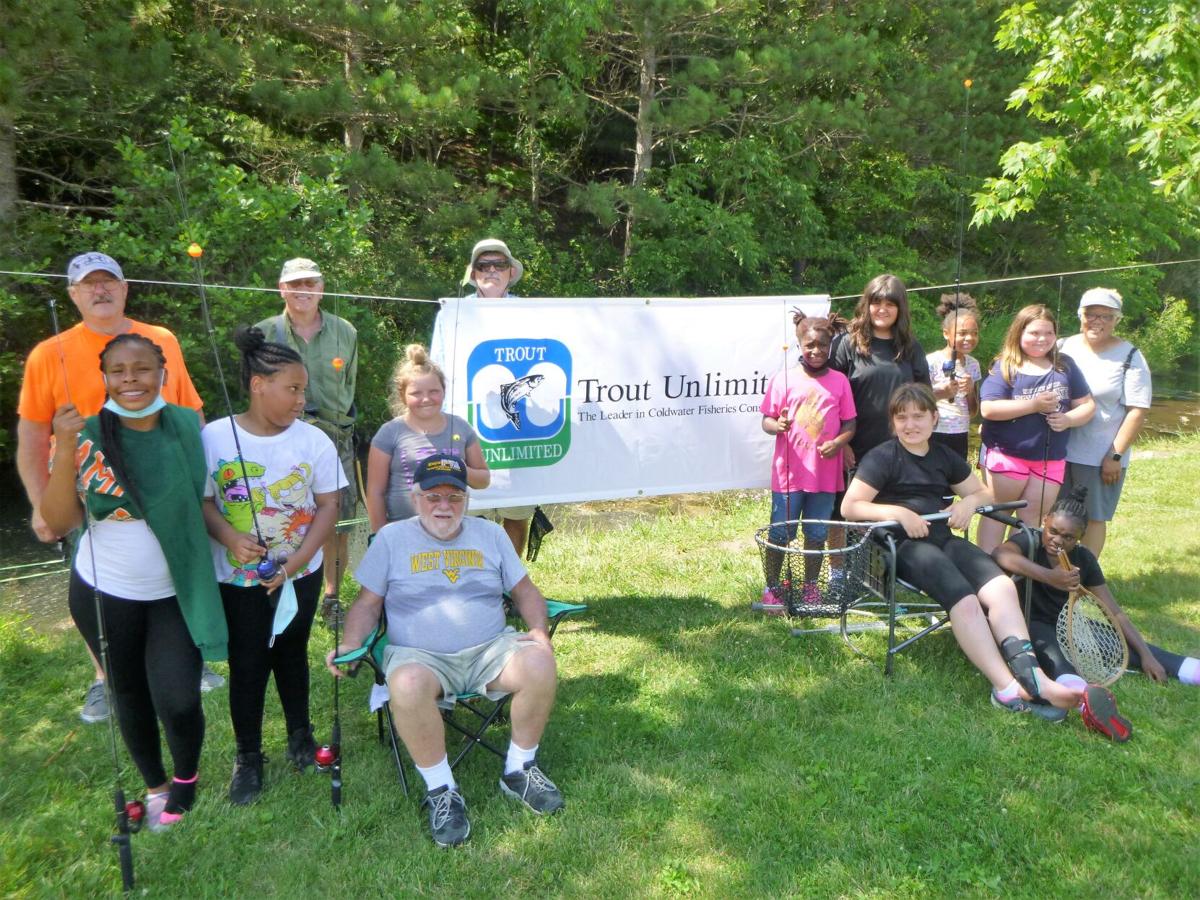 Kaliyah Marks, 8, of Uniontown, holds a pumpkinseed sunfish she caught during a trout-fishing outing organized by Chestnut Ridge Chapter of Trout Unlimited.

Nature is unpredictable, which means it is sometimes benevolent, offering up surprises that surpass the best laid plans of people. Nature was benevolent on June 28 at South Union Township’s Hutchinson Park when a group of kids enrolled with East End Community Center in Uniontown went trout fishing there.

The Chestnut Ridge Chapter of Trout Unlimited (CRTU) arranged the outing and invited the Center. The chapter views promoting kids’ fishing as part of its mission to conserve and restore streams in the Laurel Highlands region. If young people enjoy angling, reasons the group, they’ll be more likely to value clean water that supports fish and fishing throughout their lives.

Taking that logic further, CRTU offers fishing experiences to kids who might never have had a chance to fish before and might not fish otherwise. South Union’s park is an excellent venue. Late CRTU member Jim Tobal had envisioned a series of small impoundments in the stream that flanks the Sheepskin Trail, ideal for kids to fish in. The township and local contractors built Tobal’s dream, and children fish there today in organized events, and on impromptu neighborhood trips by bicycle.

CRTU is set up well to help youngsters fish. It has committed volunteers, owns its own kid-level tackle, it has nurtured partnerships with community organizations, municipalities (South Union township supervisors reserved a picnic pavilion, free of charge, for the hotdog cookout CRTU served after the fishing), agencies, and businesses that can facilitate children fishing, and it operates a trout nursery in the Yough Dam tailrace where its members raise trout that support youth events around the region.

Still, nature is unpredictable and not even a well-organized group like CRTU can control conditions on a fishing trip.

The Center wished to bring kids enrolled in its summer session, which required the event to happen toward the end of June. And on the selected day, the vanload of kids with adult supervisors was not able to leave the Center before 1 p.m. So, they arrived at the park at the hottest part of a “scorcher,” when the high white sun’s burn equaled its glare.

CRTU volunteers had stocked sleek rainbow trout earlier, during rainy, cool conditions, but the scorching rays on the 28th had the fish corralled in scant patches of shade against the creek’s far bank. In a meteorological sense, nature that day was not so benevolent. You could almost sense the trout panting.

As a national organization, Trout Unlimited is sometimes criticized for being exclusively about fly-fishing. But as a local affiliate, CRTU promotes kids’ fishing, period, with no fly-tackle-bias. Each kid brandished a Zebco push-button outfit (provided CRTU at a big discount by S&S Bait and Tackle in Chalk Hill), baited by busy volunteers with redworms, mealworms, corn, or processed trout bait below a red-and-orange bobber. When those bobbers splashed into the shallow stream, trout scattered in panic.

Most readers have probably helped kids fish in some setting, and so can relate to the pace. Snarled lines need untangled, baits need replaced, reels freeze up (not from cold that day), sometimes a fish needs netted, and its captor needs reassured that “It won’t hurt you. Go ahead and hold it.”

Despite their need for help, the kids were patient and polite, clearly well-instructed before they left the Center. But the trout were both morose and skittish. The kids did catch some trout, but one object of the day was for each kid to catch a fish, and that wasn’t happening.

CRTU avoids a competitive “edge” to these events, so there’s no focus on who caught the most or the biggest trout. Instead, the subtle accent falls on fishing’s simple pleasure for its own sake, and that each angler’s experience is as valid as anyone else’s. Still, hope lingered that every kid would reel in a rainbow — “no child left behind,” to repurpose the phrase.

An experienced angler, waiting for cooling dusk and wielding lighter tackle, could have picked off more of the trout. But as the kids flailed bobbers into the creek’s tight confines, the rainbows grew less receptive, bunching up in the shade. Some would inspect the baits, but most wouldn’t bite.

Anxiety simmered among the adults. Would every kid know some success? Then a joyous whoop rose from the girl farthest downstream, as she heaved a tiny fish up onto the trail. Her prize was a beautifully hued pumpkinseed sunfish, about three inches long. “I caught a fish,” she repeated through a beaming smile.

Perceptive volunteers noticed the sunfish bit a mealworm, so practiced hands scaled-down the hook sizes for all the kids, threading mealworms over the smaller barbs. Soon all the kids were reeling in sunfish as fast as they could release them back in the creek. Their grins proved they could not have been more thrilled if those sunfish had been Atlantic salmon.

Sometimes well-meaning expectations can overreach reality. A lot of effort went into making sizeable rainbow trout available to kids in what turned out to be poor conditions. But nature proved benevolent. Those eager pumpkinseeds were already there, and to kids who have never cast a line in their lives, a fish is a fish.