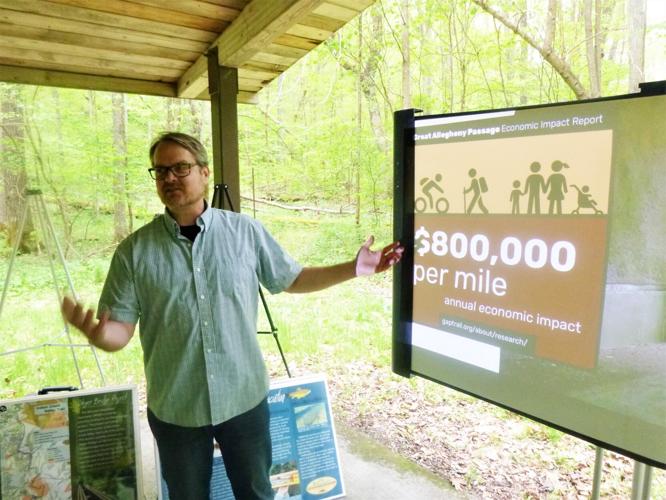 At a recent meeting at Ohiopyle State Park, Bryan Perry, executive director of the Great Allegheny Passage Conservancy, stresses a key finding of a recent study. The GAP generates $800,000 of economic impact per mile, per year, meaning the GAP more than pays for its initial construction costs annually. 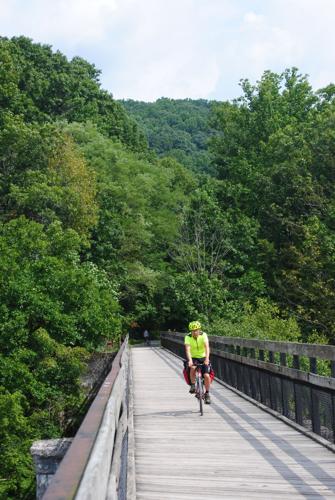 A rider on the Great Allegheny Passage crosses the “high bridge” over the Youghiogheny River in Ohiopyle State Park. According to a study by the economic consulting firm Fourth Economy, overnight GAP riders spend $496 per trip along the trail; day-users spend an average of $90 per day.

At a recent meeting at Ohiopyle State Park, Bryan Perry, executive director of the Great Allegheny Passage Conservancy, stresses a key finding of a recent study. The GAP generates $800,000 of economic impact per mile, per year, meaning the GAP more than pays for its initial construction costs annually.

A rider on the Great Allegheny Passage crosses the “high bridge” over the Youghiogheny River in Ohiopyle State Park. According to a study by the economic consulting firm Fourth Economy, overnight GAP riders spend $496 per trip along the trail; day-users spend an average of $90 per day.

Glitzy metaphors like “ribbon of gold” or “diamond necklace” might well apply, but an economics expert put it more bluntly — calling the Great Allegheny Passage an “economic highway.”

“It (The Great Allegheny Passage) looks like a scenic trail, but for the communities along the way, it’s an economic highway,” said Mickey McGlasson, senior consultant at Fourth Economy, an economic development consulting firm based in Pittsburgh.

The Great Allegheny Passage (GAP) is the 150-mile bike-or-hike trail that connects Pittsburgh with Cumberland, Maryland, over and through the Allegheny Mountains. Along its course, the GAP follows whitewater rivers through deep gorges, crosses 16 bridges, probes 4 tunnels, crests the Eastern Continental Divide, and visits more than a dozen “Trail Towns” like West Newton, Whitsett, Dawson, Connellsville, Ohiopyle, and Confluence.

The Great Allegheny Passage Conservancy, a non-profit which promotes the trail and works with local organizations to maintain it, commissioned Fourth Economy to study the GAP’s economic influence on the region through which it passes. Fourth Economy interviewed GAP users, residents of trail towns, and 125 trail-facing businesses, concluding that, in 2019, tourism along the GAP lured over $121 million in economic impact to the GAP corridor.

“Entrepreneurs in our trail towns like Dawson, Connellsville, and Ohiopyle and the others have taken risks to invest in older buildings and rehab them, hire people seasonally or year-round, to run a canoe livery or open a restaurant, and they have found success in serving people who want to come here and find an incomparable outdoor experience,” said Bryan Perry, Great Allegheny Passage Conservancy executive director.

The GAP’s first completed section was the 9-mile span through Ohiopyle State Park between Ohiopyle and Confluence, built by the Commonwealth of Pennsylvania. The rest was built in pieces over 35 years, then linked together by local residents and the trail-advocacy groups they formed. Local volunteers continue its maintenance. Initial construction of the 150 miles totaled about $80 million.

“To better conceptualize our findings, we point out in our report that $121 million in annual impact computes to over $800,000 per mile of trail, per year,” McGlasson said.

“About half the GAP’s construction was paid for with public dollars, and about half with private money,” Perry said. “An annual return in economic impact, in the five counties through which the GAP passes, that’s nearly twice the original construction cost is quite remarkable, and it shows the power of our region’s natural attractiveness to tourism.”

The GAP passes through Allegheny, Westmoreland, Fayette, and Somerset counties in Pennsylvania, and Garrett and Allegany counties in Maryland. Fayette has more GAP miles than any other county.

Fourth Economy noted, however, that GAP businesses and communities faced challenges after the 2019 study. “This region was hit hard during the pandemic,” McGlasson said. “That seems counterintuitive because outdoor recreation was such an important outlet for people, and user counts on the GAP rose dramatically in 2020. But businesses that are most reliant on GAP tourism struggled most in the pandemic. There is every reason to be optimistic about the future of the GAP business community, but that does not mean that those businesses have already recovered from a very difficult time.”

Fourth Economy also examined broader trends, beyond direct tourism spending. They found that property value near the GAP increased by 13 percent between 2015 and 2019, nearly twice the rate across Pennsylvania statewide. The bounce in property value was even more pronounced in specific trail towns. While statewide Pennsylvania home values grew by about eight percent from 2015-2019, according to Fourth Economy, home values in Connellsville rose by 42 percent, and by 18 percent in Confluence.

Perry said that one reason he is optimistic about the economic future for GAP trail towns and businesses is the GAP’s growing appeal to international tourists.

“We keep records at various visitor centers of the home countries and home states of people who stop by during their GAP journey,” Perry said. “The lists aren’t exhaustive because not everyone stops, but we’ve logged visitors from every state and three dozen countries, including Haiti, Brazil, Japan, China, Kenya, Australia, France and more. Always, they tell us our region is beautiful and there are so many things to do here. It’s especially satisfying to meet people from bike-friendly cultures like The Netherlands or China where bike riding is a part of life, and those people find our trail to be an internationally significant destination.”

Perry hopes to boost international visitation to the GAP this summer. He’s leaving today on a flight to London, where he’ll meet next week with 50 British tour planners and travel professionals to promote the GAP experience.

“Visit Pittsburgh and the Pittsburgh International Airport have lured a direct flight from London to Pittsburgh, and they see the GAP as a reason for Londoners to fly here,” Perry said.

Could be a good time for a fish & chips shop in Confluence.